From lowly onboard computer microphones to high-end alternatives and audio interfaces, there are many ways to capture the voice – and with Live you can rough it up or smooth it out. 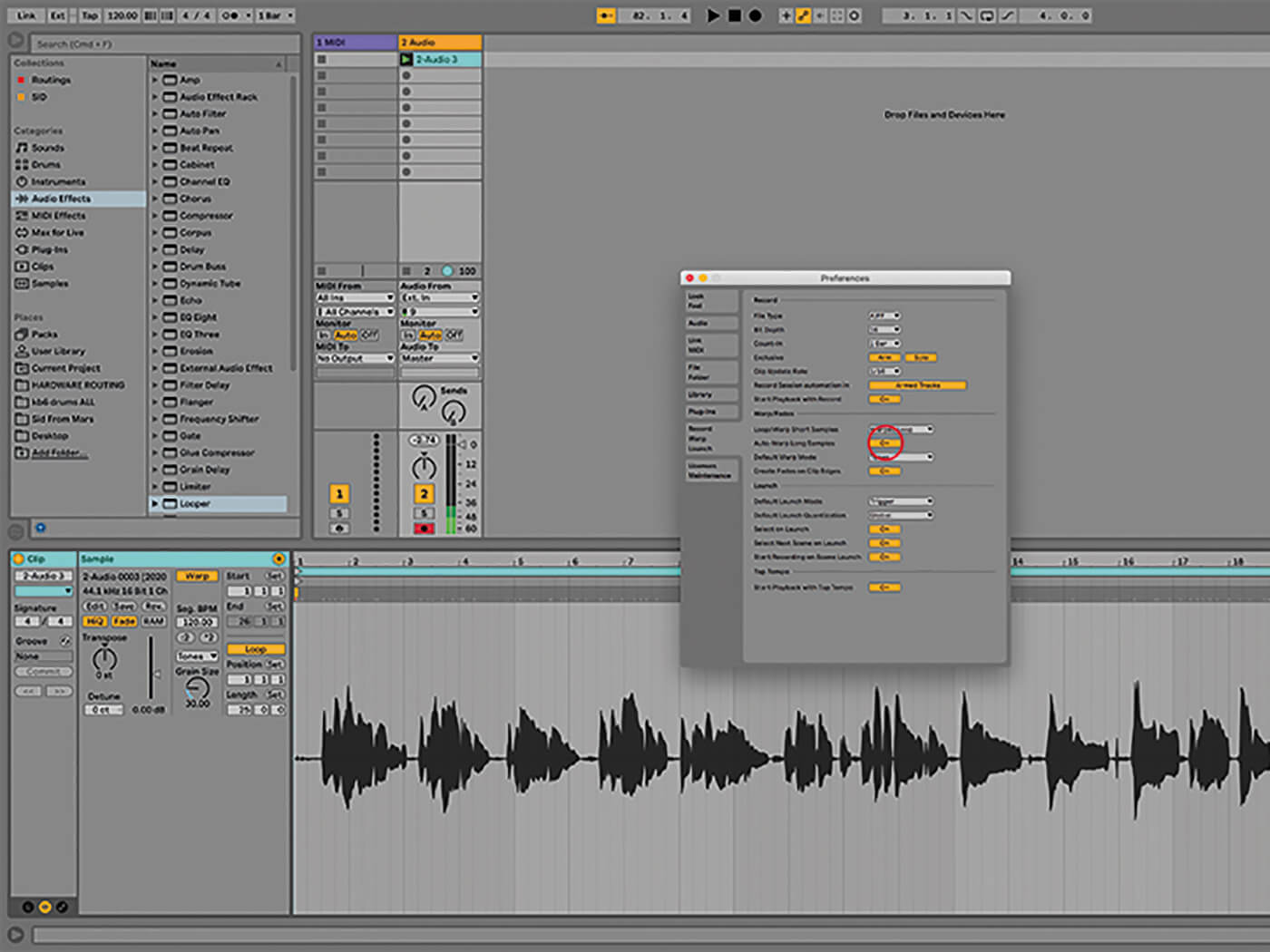 The sound of a voice can add a human touch to any composition, whether it’s a melodious vocal performance with lyrics or a few carefully selected spoken words. It’s all too tempting to turn to sampling and borrowed a capellas to conjure that kind of warm and personal ambience but you shouldn’t rule out recording vocals yourself, whether your own or those of a performer.

Expensive gear is all well and good but, the truth is, you can go a long way recording vocals using just a budget-conscious microphone and headphones. As long as you take the time to get to grips with the setup, that is – the more recordings you make in a home-studio situation that’s reproducible, the better your recordings will be. Chopping and changing kit is not always a good idea.

Live isn’t exactly packed with features when it comes to major multitrack recording projects in the same way that Logic Pro or Pro Tools is, but it’s functional, immediate, and unbeatable if you want to take your work in a more electronic or highly processed direction.

Home recording isn’t quite the glamorous tech-packed setting that many of us dreamt of as young music-industry upstarts. The economic reality, though, is that for a lot of people, it’s the only option. It may not represent the ideal recording setting but there are significant advantages that come with setting up shop at home: you’ll be free from time limitations (unless you force them on yourself), and there should be nobody imposing their preferences on you, leaving you to experiment and discover your own tastes free from the biases of others. Think of it as low-pressure DIY punk-rock recording – and Live as your modern-day 4-track cassette machine.

After configuring your preferences, decide which of Live’s two views to record in: Session is more reflexive and attuned to performances and jamming – if you’re putting down something that’ll be used in short chunks, resampled or looped, then this is the window you’ll want; Arrangement, instead, offers a timeline-centred window that will feel familiar to users of other DAWs – if you’re looking at recording long takes, cutting an entire song with verses and choruses, for example, this is the place to be.

More than with any other DAW, you’re never truly forced into anything with Live. After recording, for example, you can still move recorded clips between views, using copy and paste or the Context Menu’s Consolidate Time to New Scene command. To make clean and tidy recordings, you need to be the boss of your gear, your room and especially the levels.

Don’t go in too hot. You never want to see your meters, be they on hardware or software, peaking red, because that will inflict irreparable distortion on your tracks. Okay, if you’re recording on tape through an analogue mixer, you can perhaps push your meters a little and strive for that inviting analogue-distortion sound but, in the digital world, distortion is best left until the post-production stage. It’s better and safer to record your vocals as cleanly as possible before dirtying them up afterwards.

Outside the box, the core variables when recording vocals are the voice itself and your microphone setup. If your sound source – you or your vocalist – is too close to the mic, you’ll likely end up with a recording littered with plosives and breathing noises that you’ll only have to edit out afterwards; if your source is too far from the mic, your recording will lack dynamics and presence, with the voice fading into the background noise of your neighbour’s radio and your perennially humming fridge.

Basic audio editing can be completed within Live’s Arrangement view, where it’s easy to select, delete or move audio. For more in-depth editing, you can go into the Preferences/File Folder and nominate your chosen sampler editor – Audacity is one of the most popular free examples. From here, clicking the Edit button in the Sample box will allow you to work on your audio in your chosen editing suite before bringing it back into Live.

Sometimes a vocal track serves as a document of a performance, something that actually happened, as opposed to something modular that can be assembled, chopped and changed on a whim. Other times, the prime recording part is merely the beginning of a wider journey of experimentation and manipulation.

Drop a vocal into Simpler, Live’s sampler player, for example, and you’ve got yourself an instant keyboard part. Click the Rev button to reverse it or use the pitch shifters to create artificial harmonies. They’ll likely sound fake, sure, but that’s not necessarily a bad thing. In fact, by duplicating and lightly pitch-shifting a vocal, you can effortlessly thicken up stacked tracks of real vocals, in which your shifted parts are barely noticeable, not standing out but instead quietly supporting your raw, unaltered parts. We love pitch shifters and harmonisers, whether it’s Apple’s free AUPitch plug-in, Eventide’s plush PitchFactor and H9 pedals, or do-it-all boxes like the TC Helicon VoiceLive Touch 2, a fabulous way of adding up to four extra voices live.

However you go about recording and editing your vocals, being self-sufficient with your projects can prove hugely liberating. Enjoy the independence and reap the rewards of being in control of your own destiny. 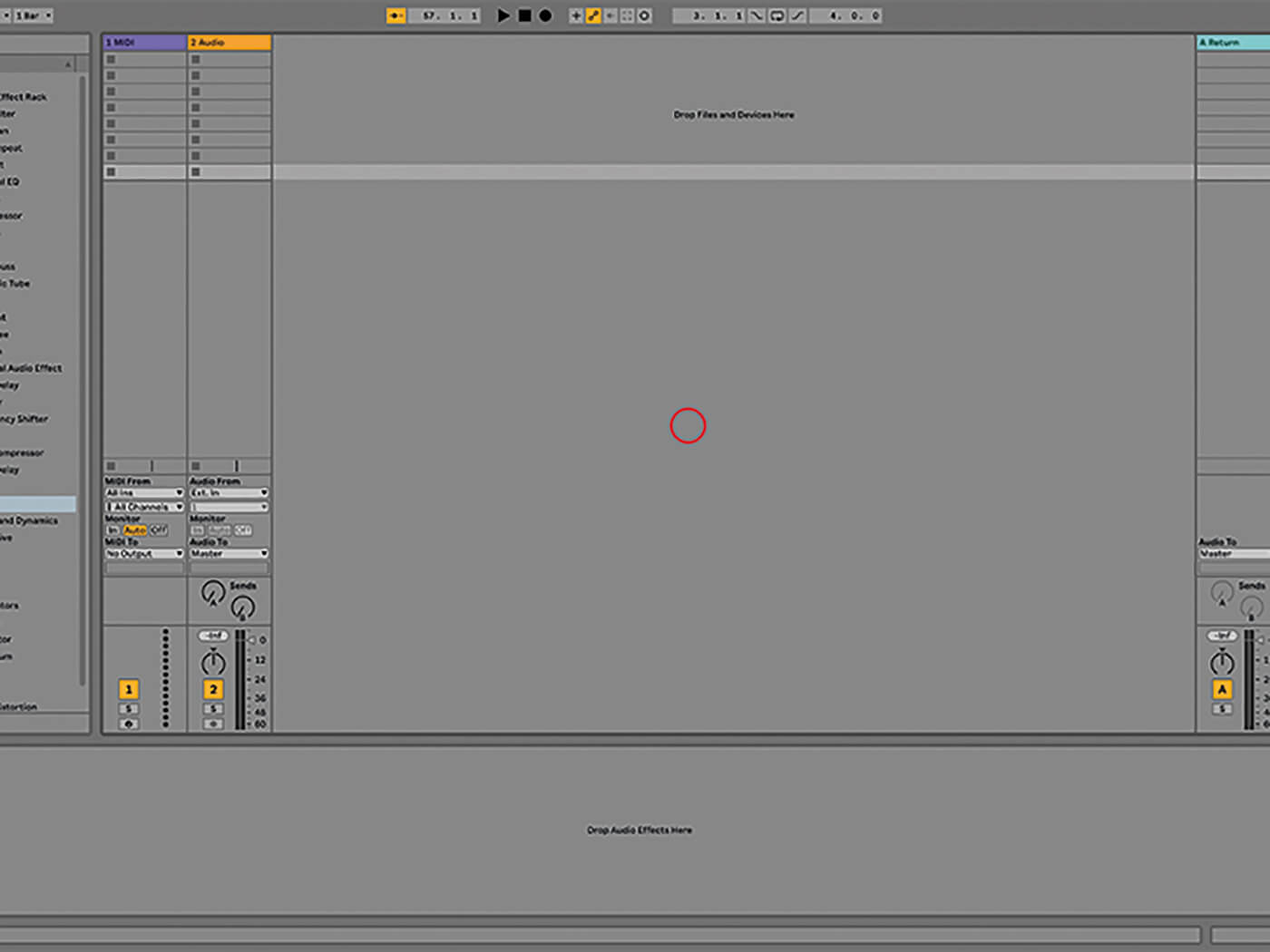 1. You don’t need any specific version of Ableton Live to get started – even the demo will do. As long as you have some reasonably solid headphones and your computer has a built-in microphone, you’re good to go. 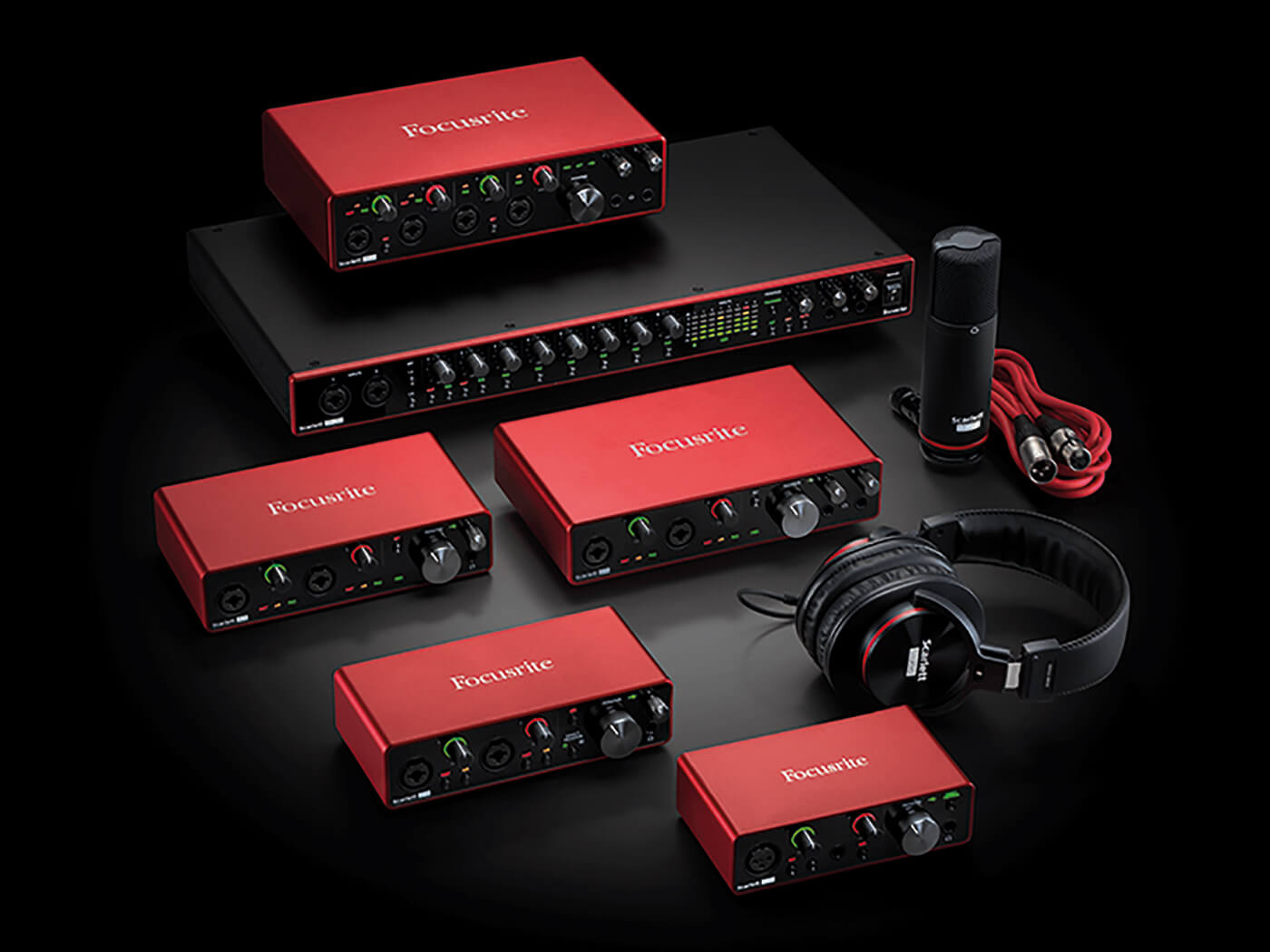 2. Feeling more ambitious? Equip yourself with a solid standalone microphone (see page 112) and an audio interface that can connect to your computer via USB or Thunderbolt. Even low-budget setups can give good results. 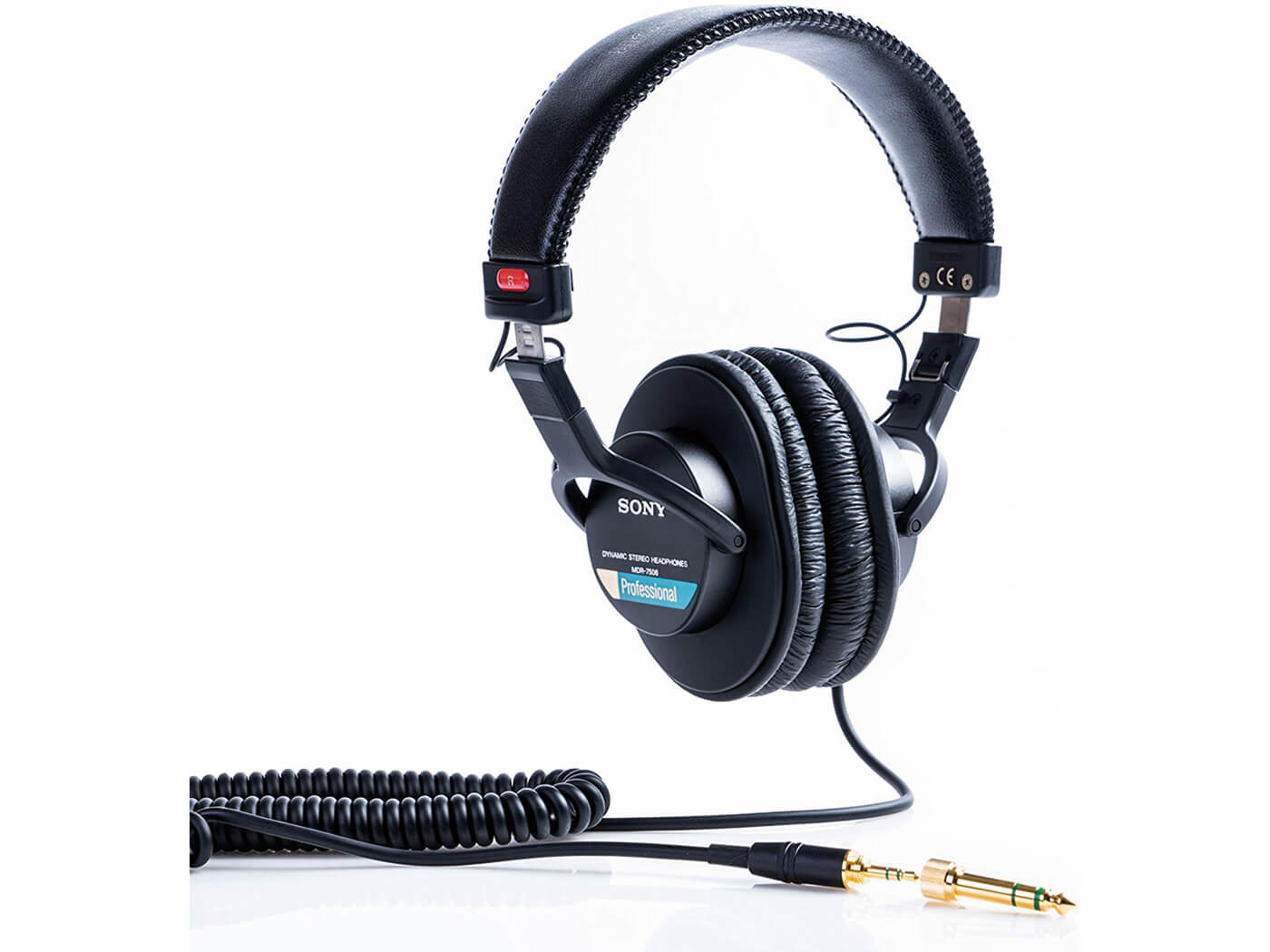 3. Headphones are vital for monitoring but especially so when recording anything through a microphone. If you try listening back on speakers, you’ll likely create feedback as the mic picks up the sound coming from them and sends it back again. 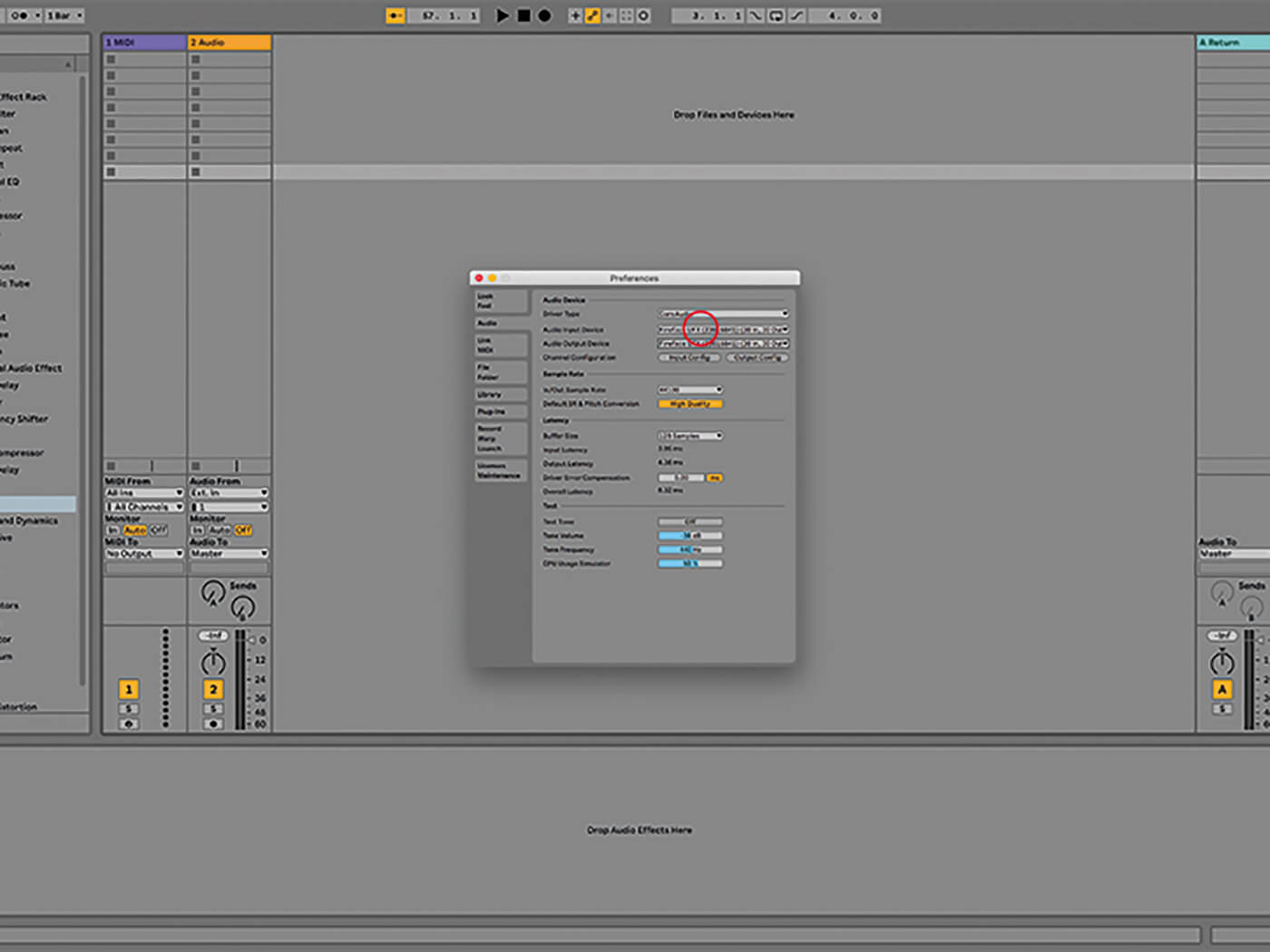 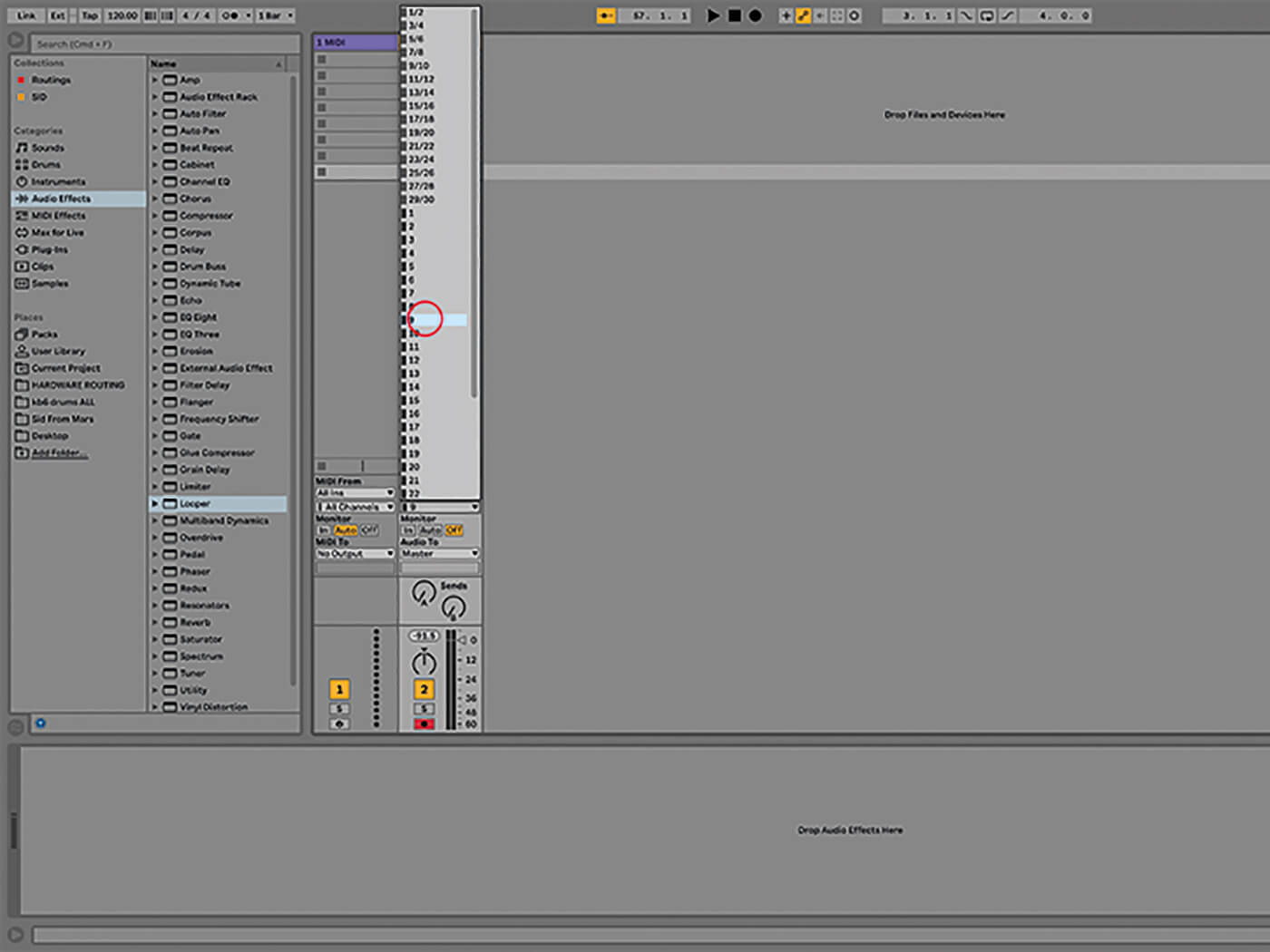 5. Locate or create an audio track in your project. Use Alt+Cmd+I to toggle the In/Out view, and select Audio In/Ext In, as well as an input channel if necessary, and arm the track for recording using the mixer below. 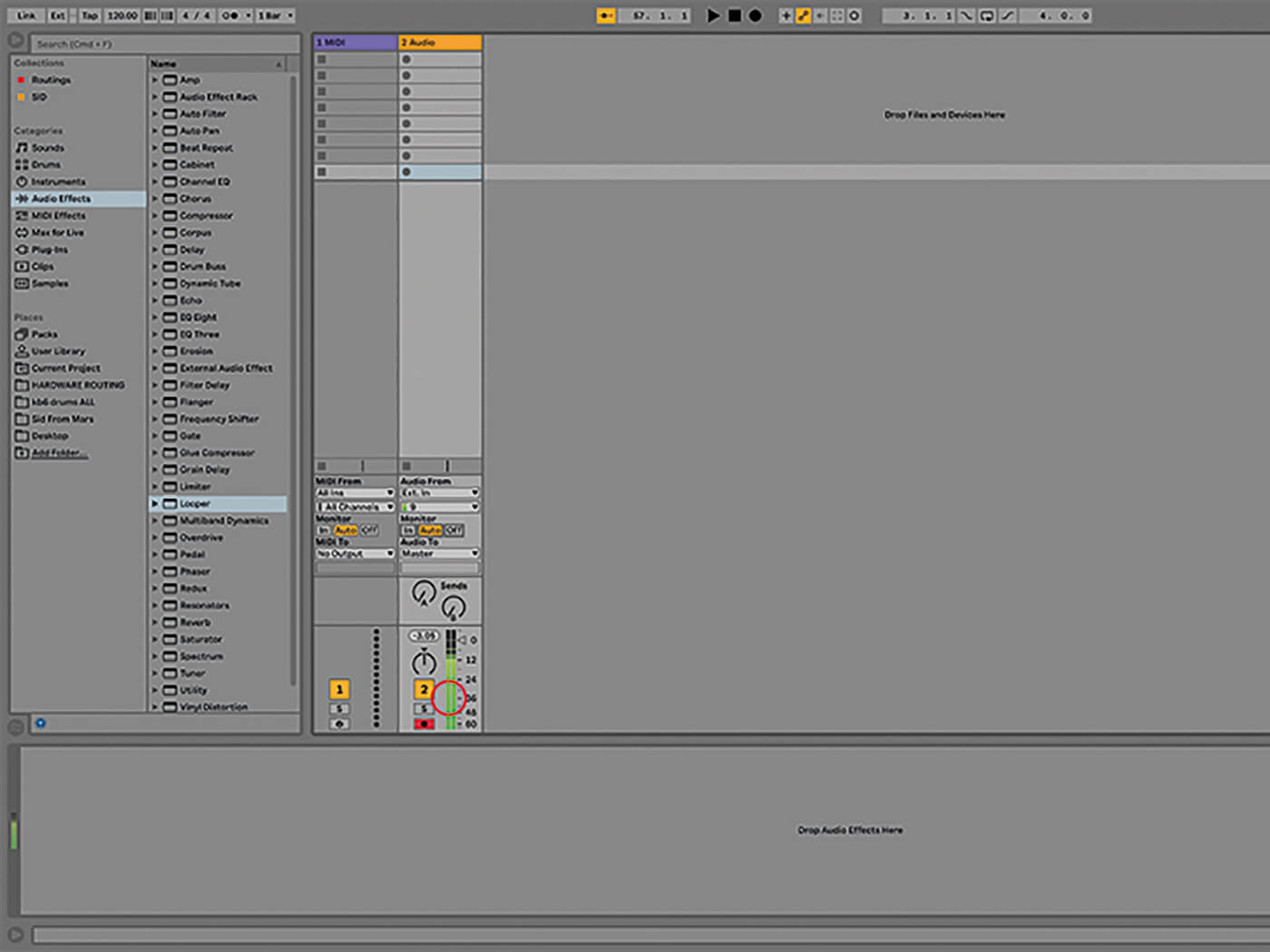 6. With the In/Out view, you can leave Monitor set to Auto. As you arm the track, you should hear your microphone input coming in. You should see a small activity meter in the In/Out view, and a larger one in the mixer.

PUSH AND VOCALS 1 Ableton’s Push pad doesn’t bring anything specific to voice-recording sessions but can be useful for accessing transport, track arming, recording triggers, and metering. You could also use it to handle live looping with clip and scene launching, or through the Looper device. 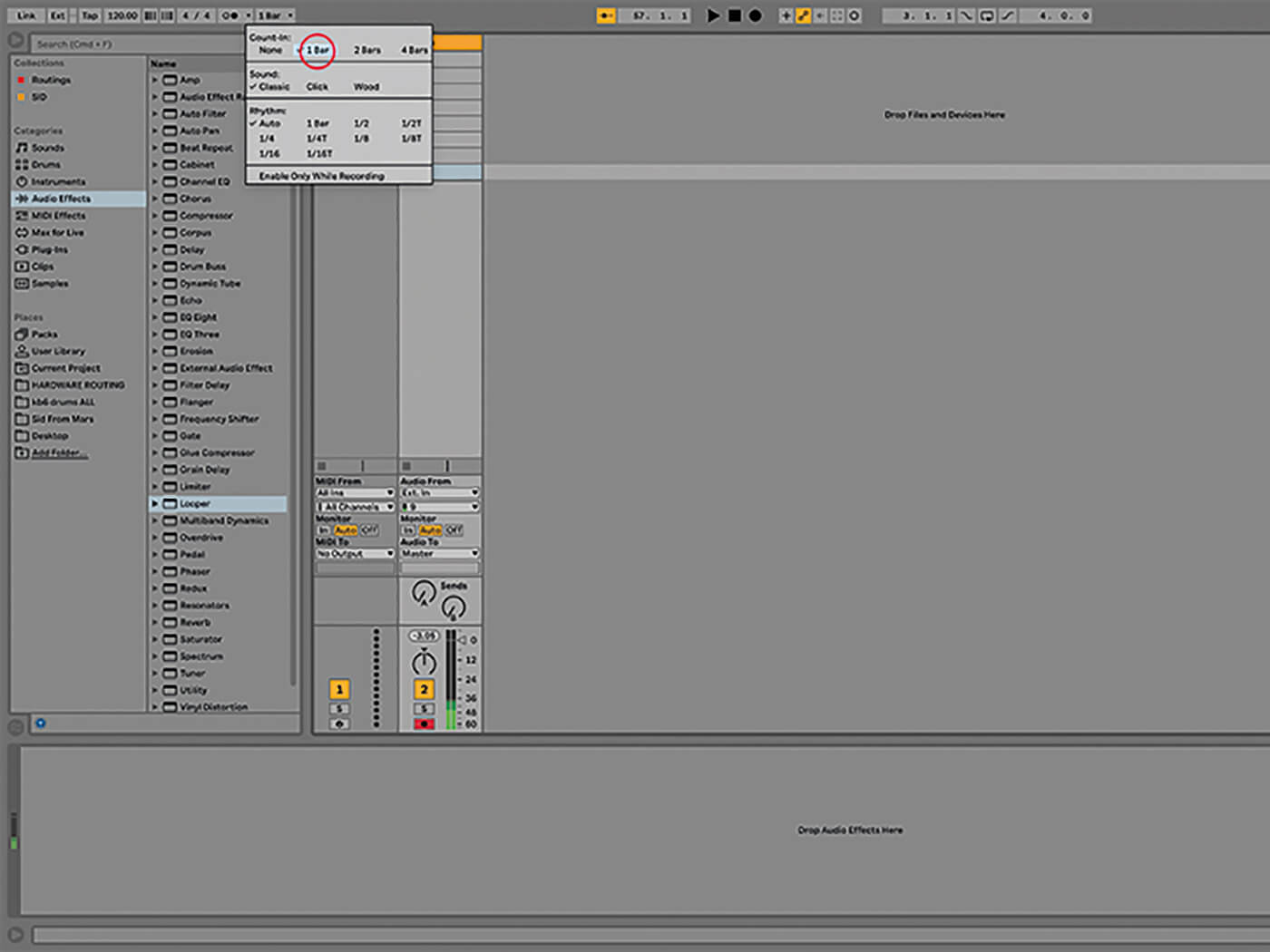 7. Adjust your recording levels to ensure that the meters won’t peak and check your mic position (remember, not too close, not too far). Set a count-in if you want, then click an empty clip slot (in Session) or the record button (in Arrangement) to start recording. 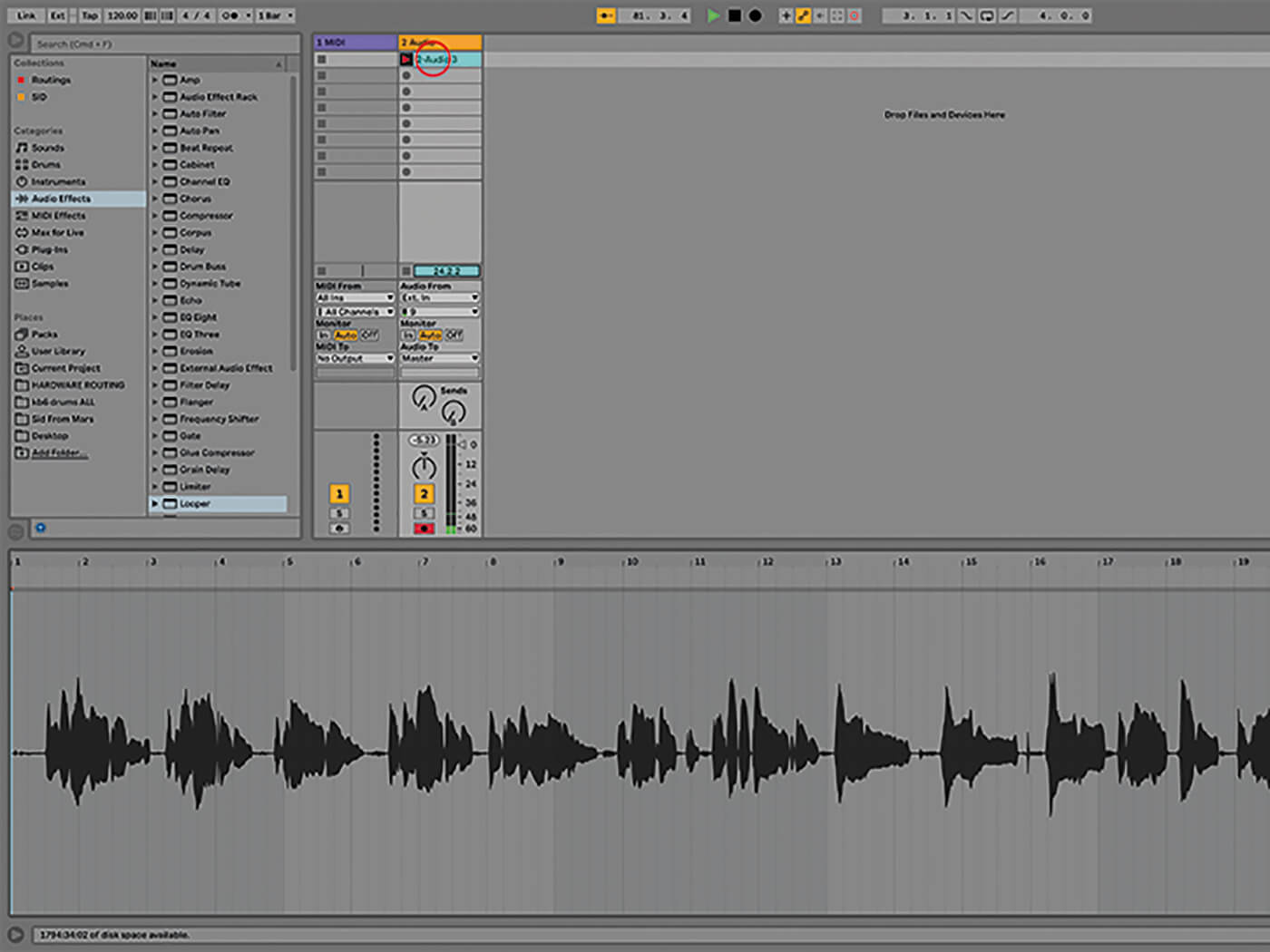 8. Sometimes it’s helpful to view the waveform as it goes in, other times it’s distracting – either way, it can at least confirm whether you’re actually recording or not. This is part and parcel of being an at-home artist – you’re singing and engineering at the same time. 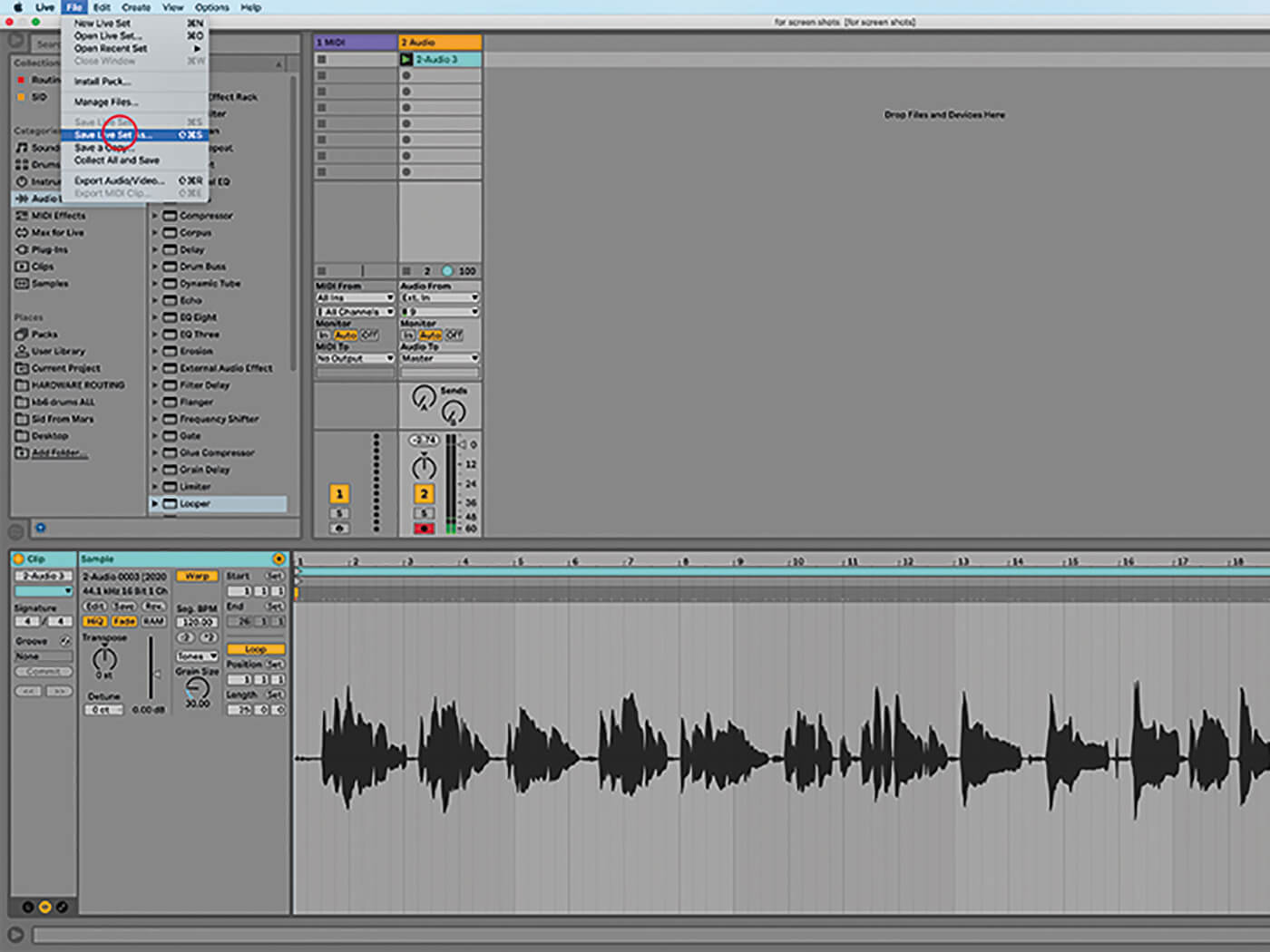 9. As soon as you finish recording, stop Live with the spacebar or stop button, then save your project, just in case you got the once-in-a-lifetime take. Saving regularly is a good habit to get into.

10. It’s up to you whether you warp your recordings or not, and that decision will largely depend on what you plan to do with them afterwards and whether they have to sync up with other material. You may have already turned warping on via Preferences. 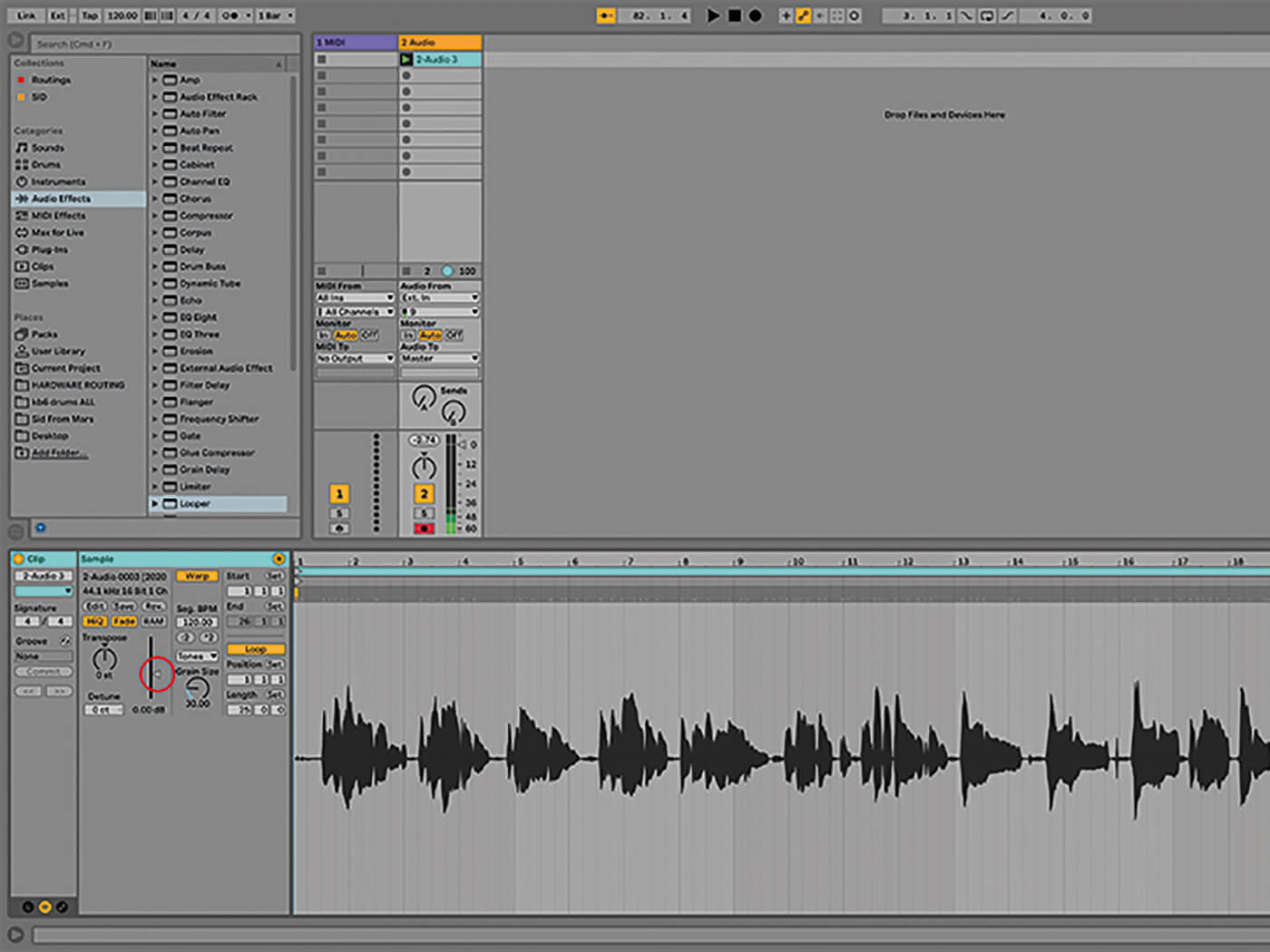 11. If you’ve been overly careful in trying to avoid maxing out during recording, you might find that you’ve gone too far the other way and ended up with a quiet take. Before reaching for the track fader and pushing it up, use the vertical Gain slider to pre-mix the clip. 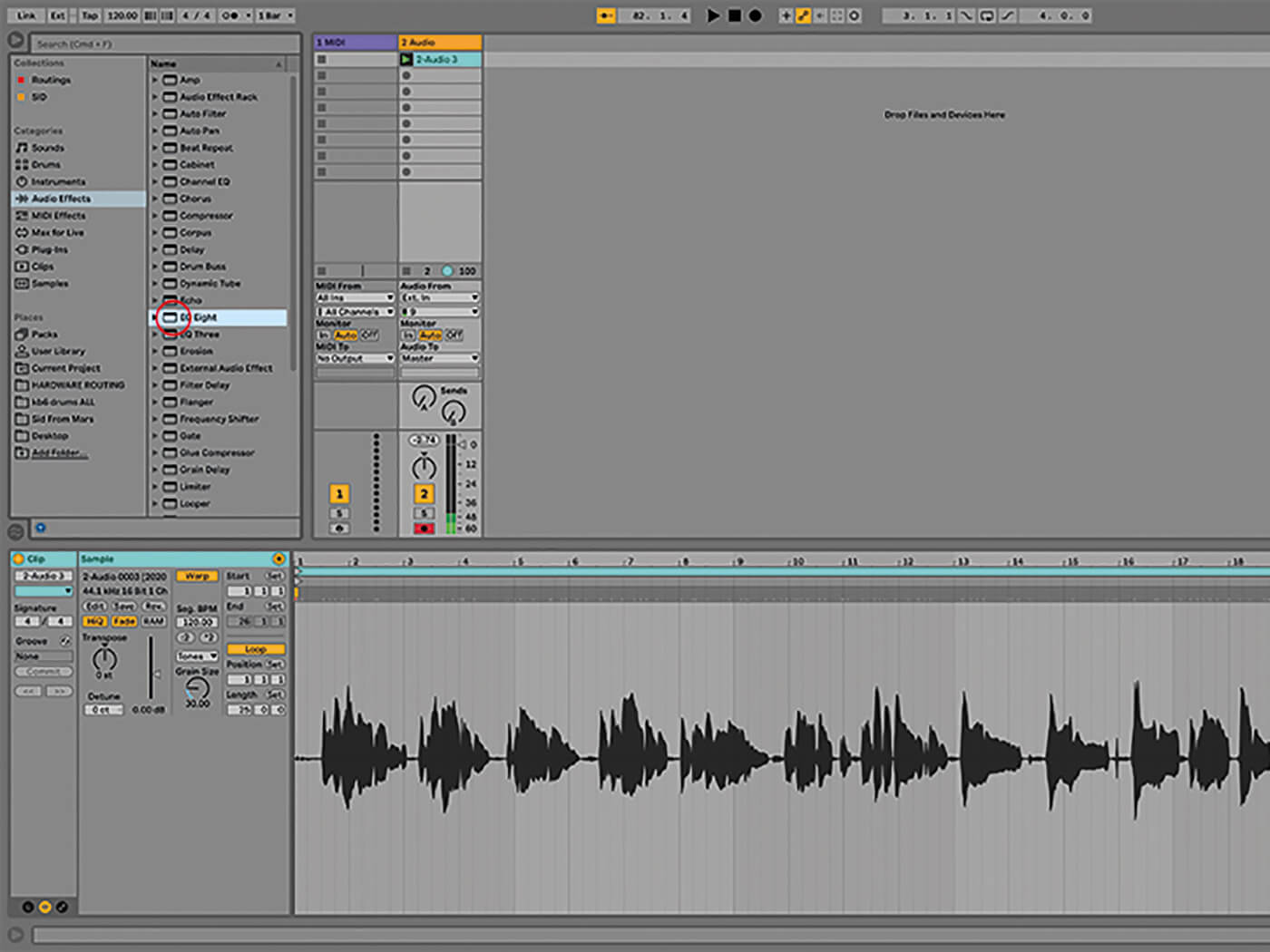 12. Deploy the EQ. Most microphone-sourced recordings will suffer from some low-end background noise, and this can only get in the way when mixing, especially if you have multiple recorded tracks.

PUSH AND VOCALS 2 It’s possible to operate Push as a musical instrument while singing as well – it’s no harder than playing guitar or keyboards while you sing. Just don’t let its bright lights distract you from your lyric sheets and soaring high choruses. 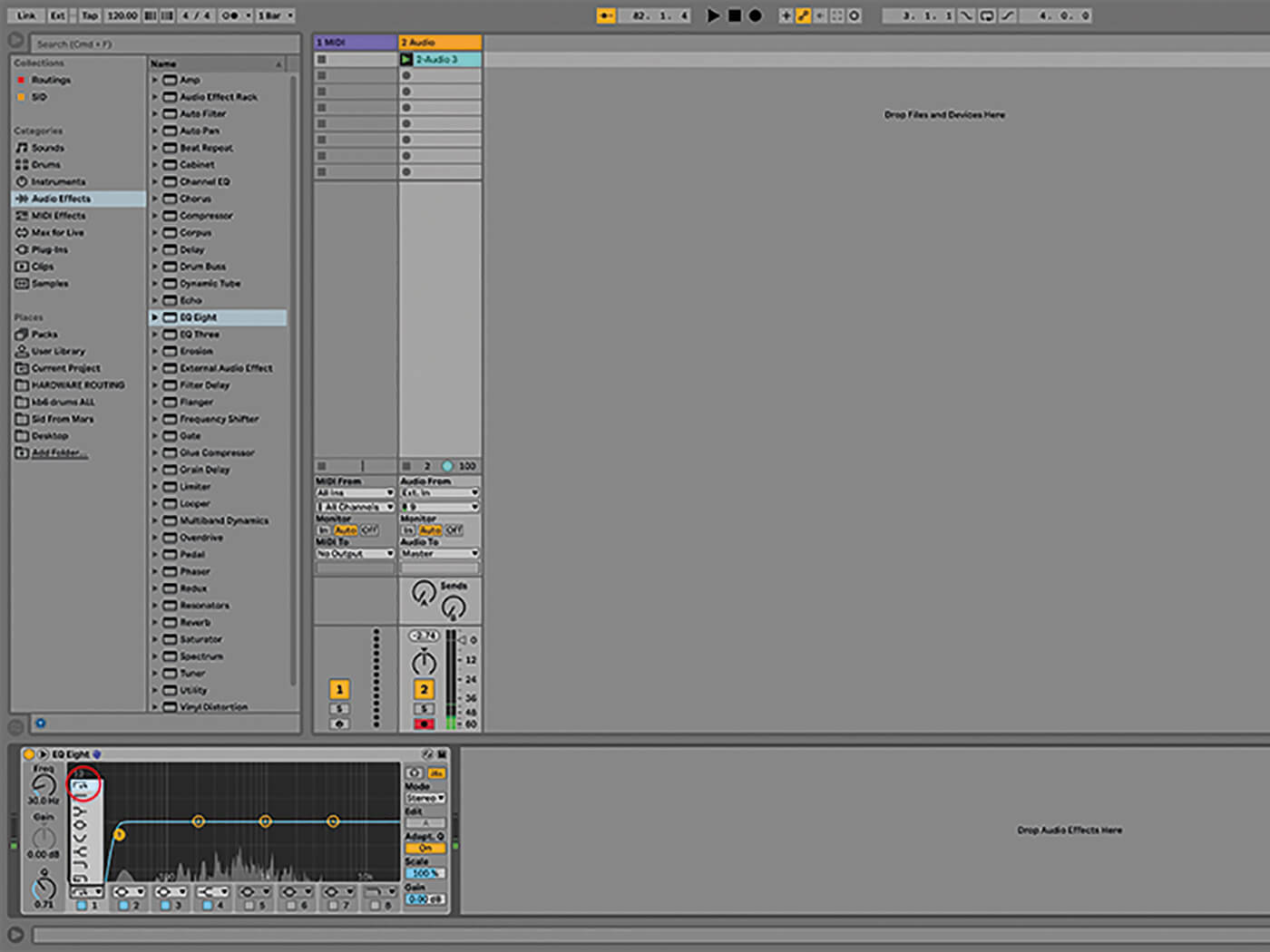 13. Load up Live’s EQ Eight and click on filter dot 1. Set the filter mode to low cut, which will prevent any frequencies below 30Hz from getting through. This is a value commonly used for locking out low-frequency junk but you could always experiment with it. 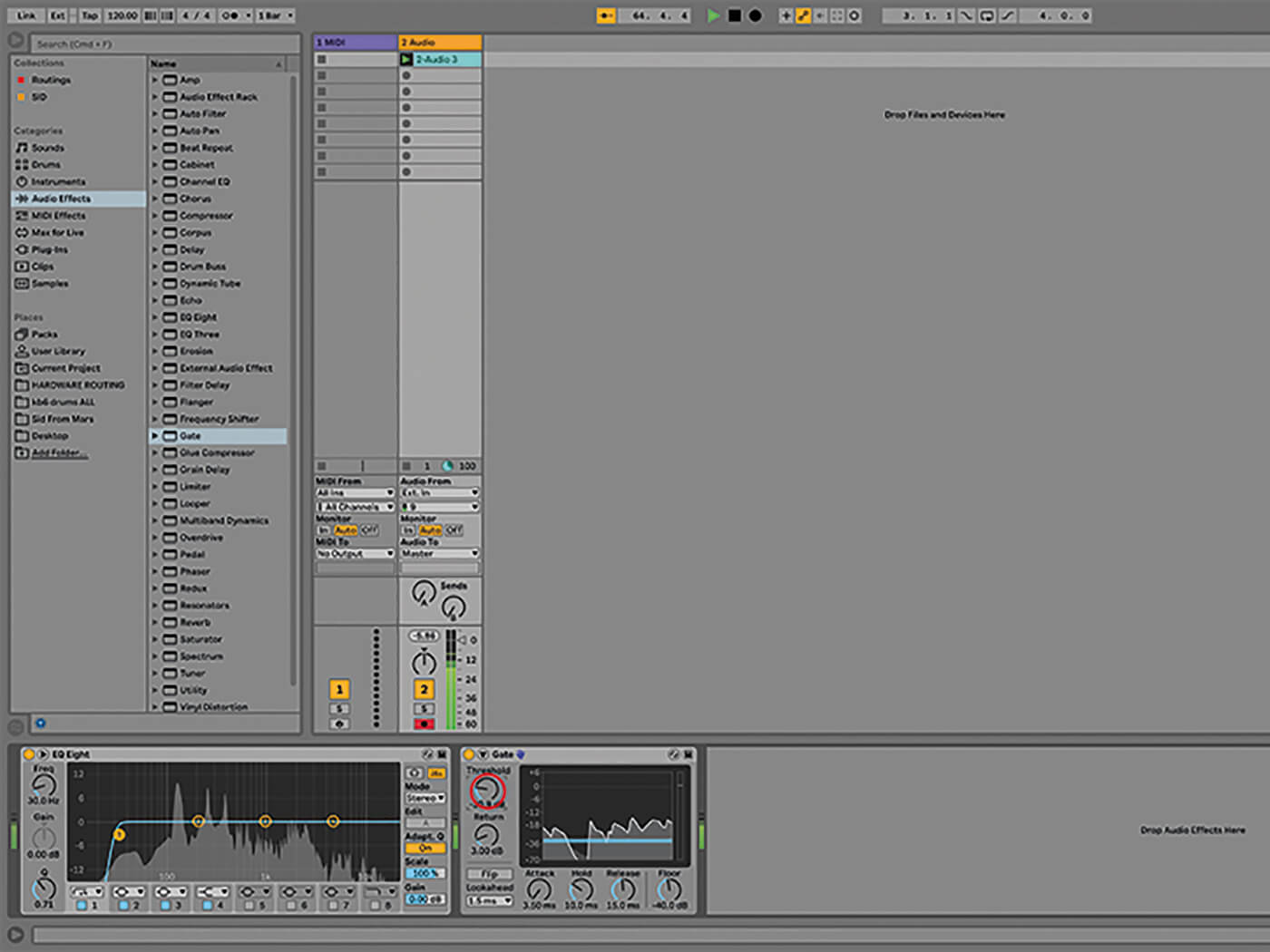 14. Live’s Gate audio effect can be useful for silencing background noise between words or phrases but it doesn’t always work and it can be tough to find the perfect threshold. It may be easier to crop out the offending parts altogether instead. 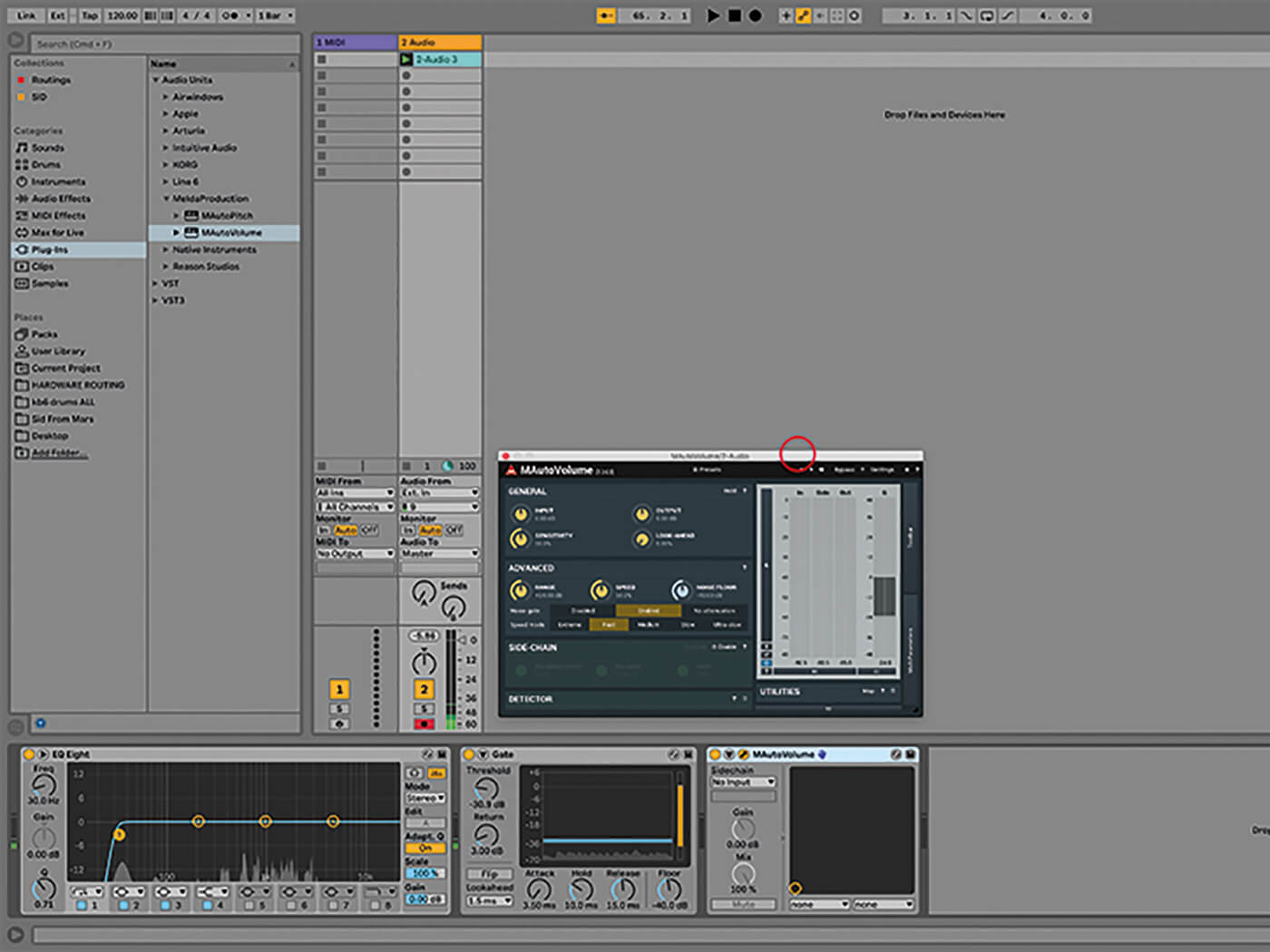 15. Next, it’s a good idea to add some sort of level-management plug-in, such as Waves’ Vocal Rider or MeldaProduction’s MAutoVolume. These plug-ins provide real-time level adjustment, smoothing out peaks and troughs in your takes, without the need for any automation. 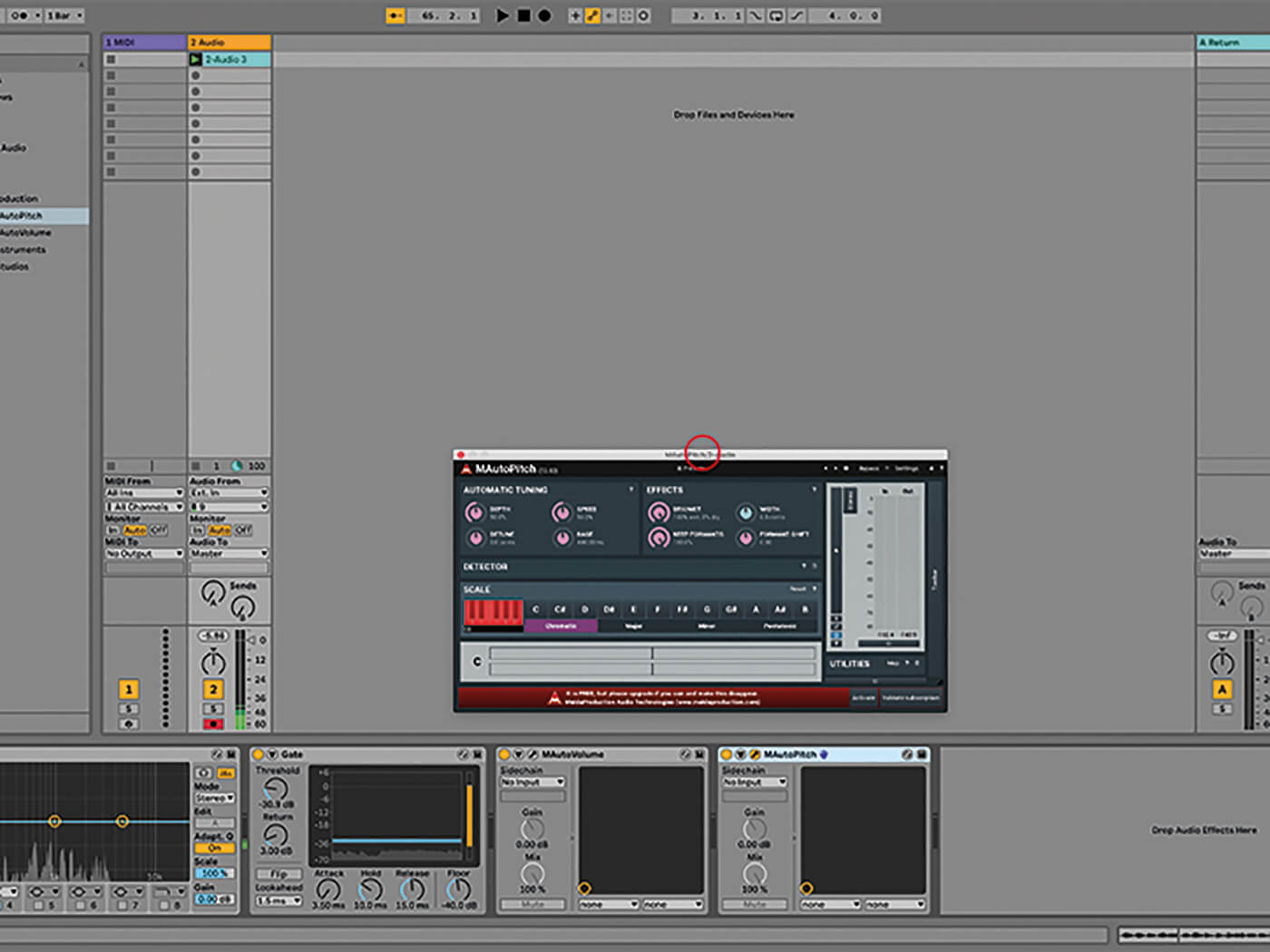 16. Following that, you might want to add pitch correction to your sung parts. Relax – this is barely controversial anymore and everybody does it to a degree. It’s up to you whether you apply it subtly or crank it up in search of a stylised sound. 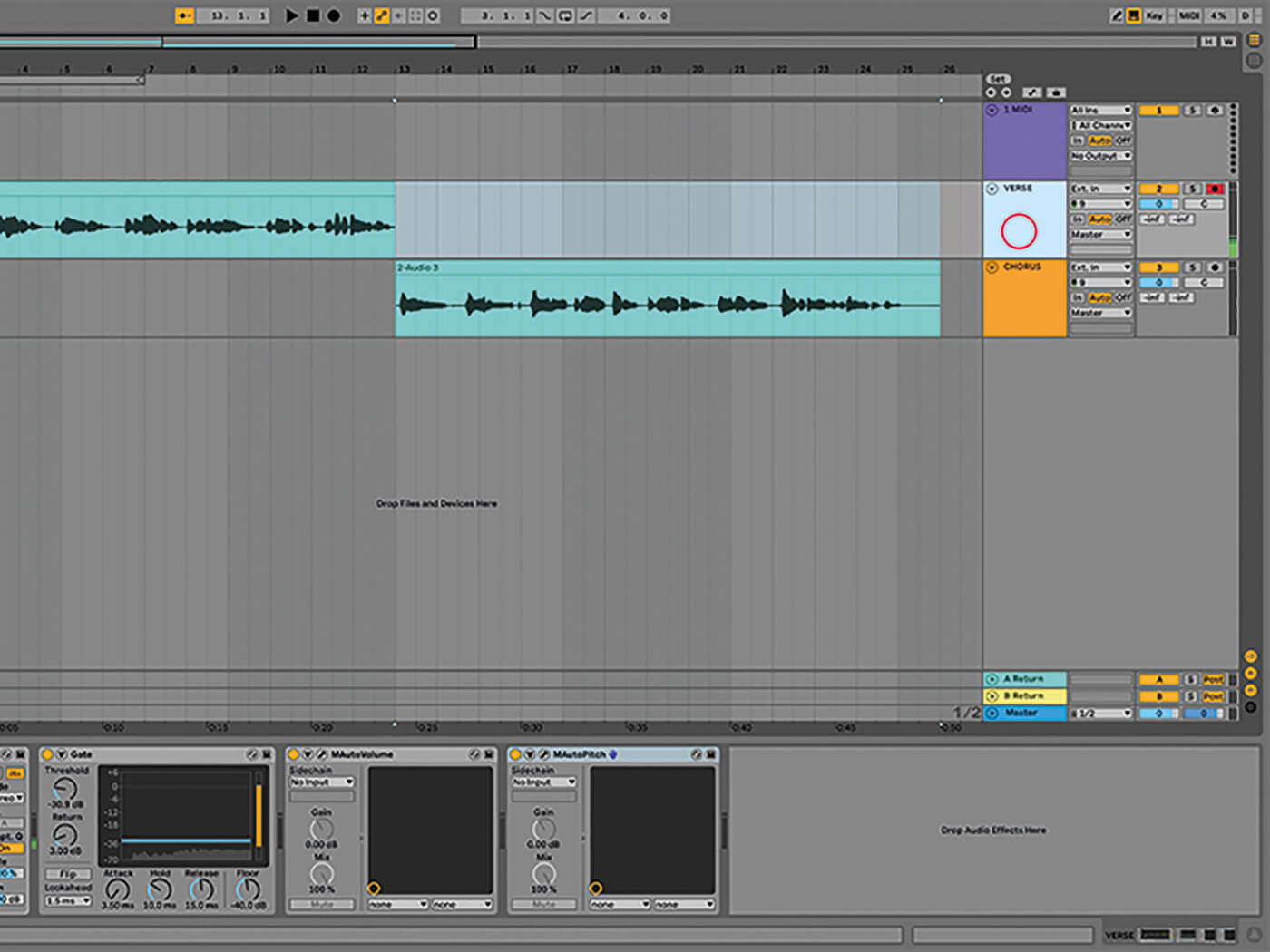 17. Rather than automating effects as your vocals progress through your track – you might want different effects to kick in at the chorus, for example – it’s better to split your song into separate tracks for more direct level and effect control. 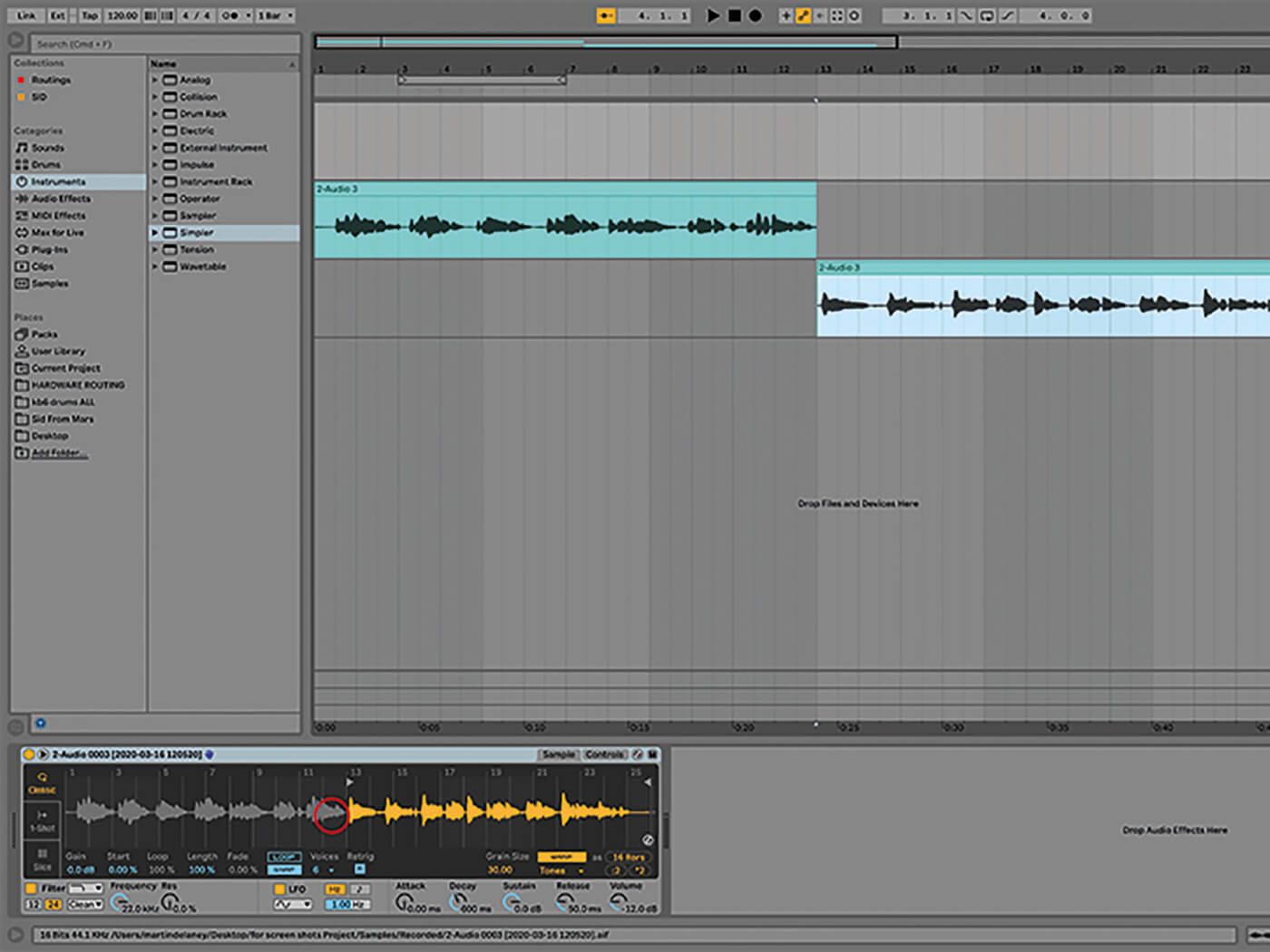 18. To step it up another level, sample some of the vocals into either Live’s Simpler sample player or the Looper effect. These will let you take things in a more electronic direction. Using vocals in Simpler can prove a fun launchpad for keyboard sound design.