Ableton isn’t rushing to release Live 10, but we can forgive the company as it’s been feeding us new features for Push and Live in various 9.x updates. Martin Delaney details the newness in 9.7… For this tutorial, you’ll need the project file – download from here Ableton Live 9.7 was recently released, although I’ve […] 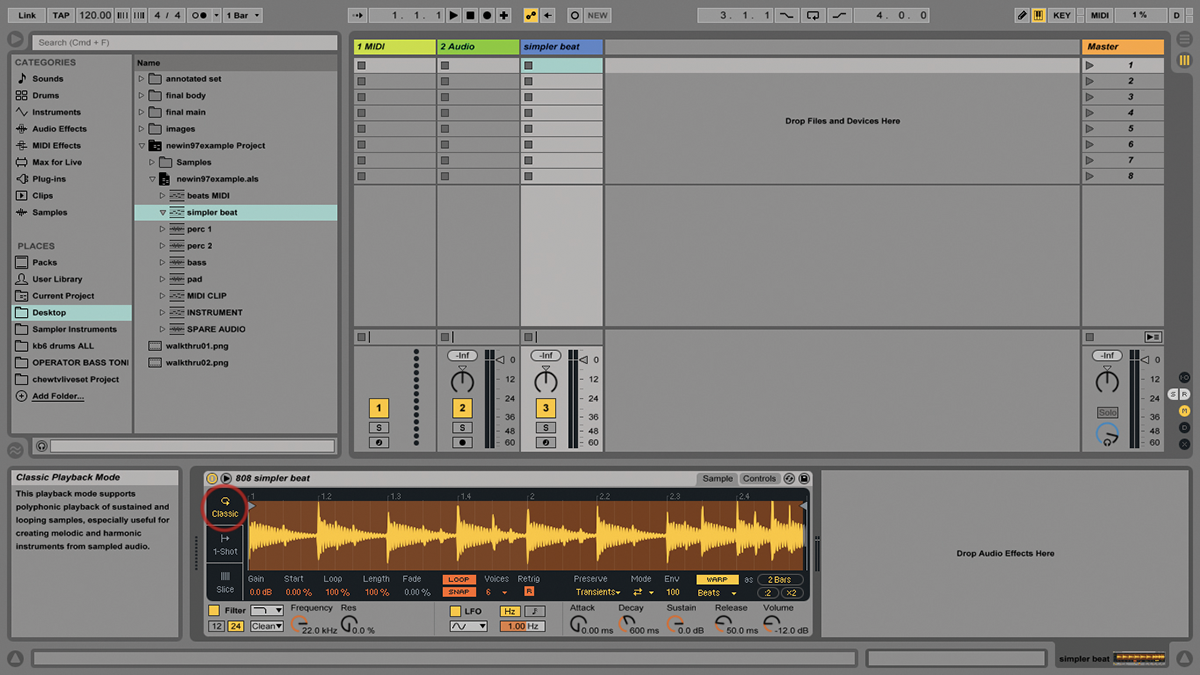 Ableton isn’t rushing to release Live 10, but we can forgive the company as it’s been feeding us new features for Push and Live in various 9.x updates. Martin Delaney details the newness in 9.7… 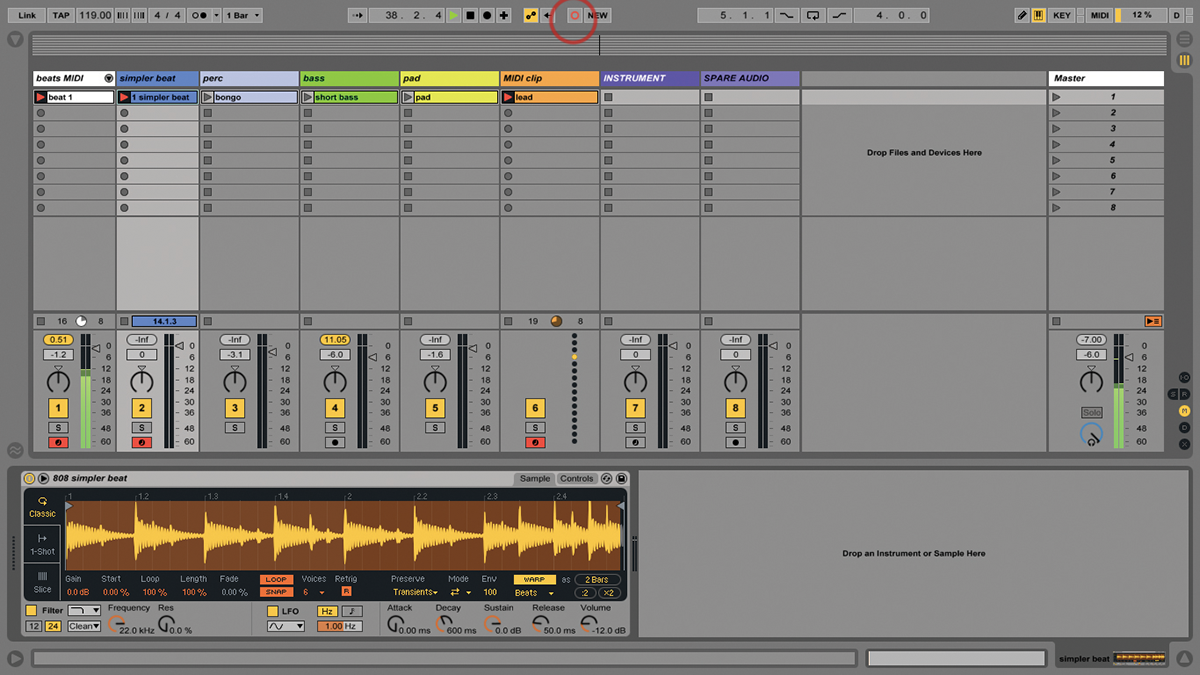 For this tutorial, you’ll need the project file – download from here

Ableton Live 9.7 was recently released, although I’ve been lucky enough to have been using the beta for a while now. Live 9.7 is a free update for anybody using Ableton ‘s Live 9 – so download it as soon as you can. What have you got to lose?! And as you’ll find out by reading this overview, you really do get a lot of bang for your (no) buck in this latest Live update.

You’ll see that alongside the typical fixes and tweaks, there are some major new features in 9.7; especially relating to Live’s interaction with Push, as that increasingly becomes the de facto control surface for our favourite DAW.

In ongoing efforts to keep as up-to-date as possible, I’m using Push 2 for all of these tutorials – it probably won’t make any difference in most cases, but it’s something to bear in mind.

In recent times, Simpler’s been getting a lot of love from Ableton, as it should – and the new slicing modes are interesting: Beat, Region, and Manual. They’re really just simple variations on what’s already possible, but they’ll speed up a lot of common slicing and sampling tasks and, like many features in Simpler, seem optimised to help make Push 2 more of a serious sampling platform/interface. That integration is working, as full control over these new features is available from Push. You can choose Mode, Slice

By and then the relevant value, such as Transient/Sensitivity, Beat/Note division, or Region/No. Of Regions. For the Manual mode, you can tap a pad to specify the slices, and also tap the Delete button, then the pad to erase those slices. 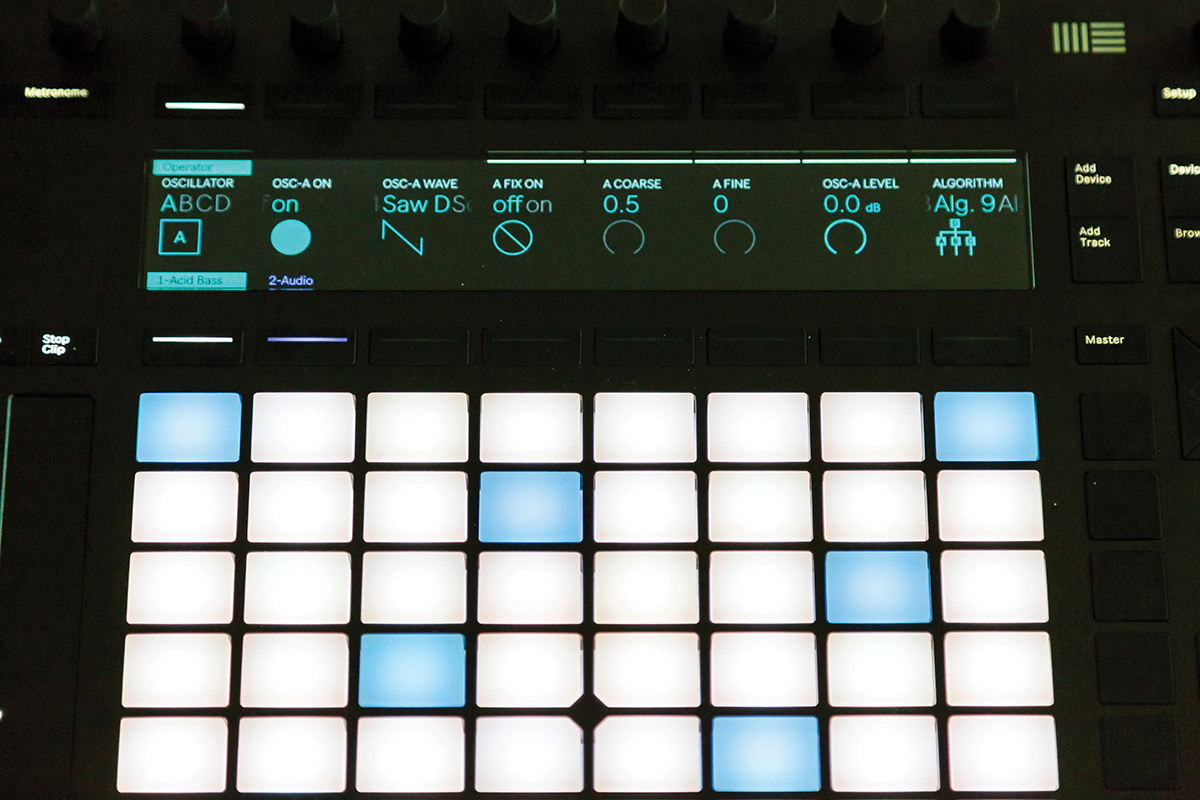 Genius! This is a great way to put those pads to work. The ability to access the In/Out View controls from Push is a major workflow bump as well – this goes with the existing mixer controls to make Push a more credible front end for your Live-based mixing rig. The menus are divided into very logical columns and fast to navigate. This is definitely a Push function that will be quicker than using the mouse!

For real-time drum-pad players – I hate to say ‘finger drummers’, but there you go, I’ve said it – the additional drum-rack layout is a real gift. Playing beats becomes a totally different experience and gets great results.

You can create really dynamic fills and breaks – it’s one of those things I couldn’t see the point of until I tried it. Be sure to edit your drum rack’s Simpler instruments to be responsive to incoming velocity changes using the Vel>Vol setting in Simpler’s Controls tab; it makes a big difference when it comes to personalising your racks.

There are a number of visual-feedback improvements relating to Push 2, and if you’re new to Live or DAWs in general, you might not appreciate how important colour coding and visual information are.

They quickly become habits you depend on in the studio, especially when you’re working with more complex projects, where the more labelling and identification you employ, the faster you’re likely to work. They are even more important in live-performance situations where it’s so easy to be distracted and lose focus.

In my live sets, I’m using renaming, colour coding, display zoom, different skins, whatever it takes! Push now provides a visual count-in – a little segmented bar across the display – so you can refer to that in situations where you don’t want to hear, or can’t hear, the usual metronome count; very useful…

Live 9.7 also includes a small but important Link tweak – Ableton Link, of course, being the means by which Live and various iOS music apps can sync over WiFi. The timing of connected iOS apps will line up correctly when Live’s transport is started with either tap tempo or the Looper audio effect device. (Looper has an option to start Live playing when loops are triggered.)

Although Push has functioned as usual with mixing and device controls, when Live’s been in Arrangement View, it hasn’t had much else to offer for when we must work in a timeline. So not only is it good to see the changes to enable either Global or Session recording when working in either view with Push, it’s now also possible to delete Arrangement View clips from Push – it’s a small step in the right direction.

As I said, most of the Live 9.7 update is concerned with Push, which I think is perfectly reasonable at the moment, especially given that it’s a free update – it’s not a case of if you don’t use Push, you’re being asked to pay for features that you won’t use.

It seems like a good use of resources to concentrate on making Push integrate as tightly as possible, if it doesn’t affect Live’s usability for other people – and, of course, everybody gets to use the new features like Simpler’s enhanced slice modes.

There’s currently no concrete sign of Live Ten/10/X, whatever it will be called, on the horizon – so for now, let’s enjoy the little and not-so-little additions that Ableton is including along the way.

You can safely install Ableton Live betas alongside your regular version. Make sure you’re always saving work on a full version, though – there’s no guarantee a project created and saved in a beta version will open in the future. 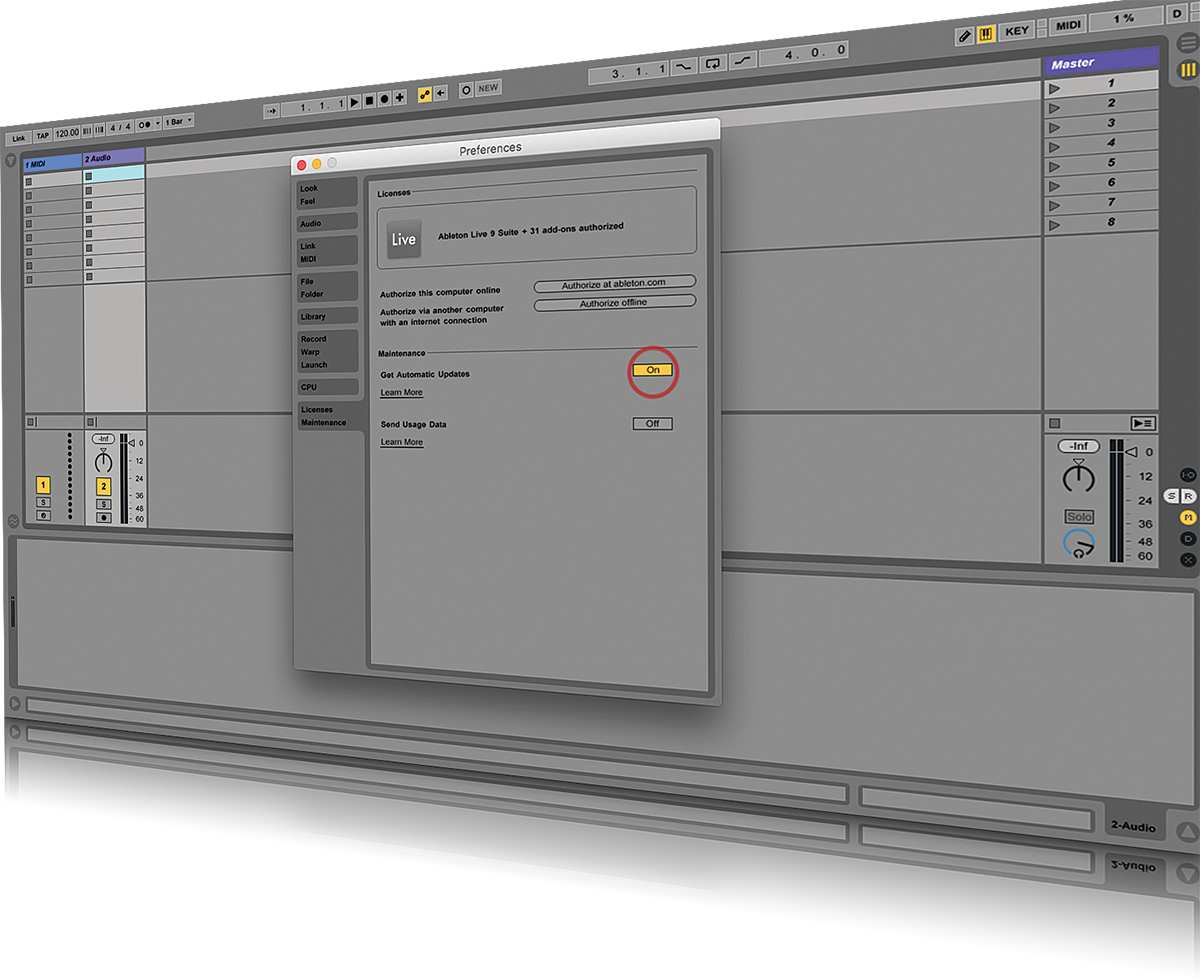 When you install the final full release of the new version and replace the old one, your Live library should remain intact – but here, I’ll add the usual comments about the value of backups. And I leave Get Automatic Updates in Preferences/Licences Maintenance turned off; I don’t want updates occurring the week before an important project or event. 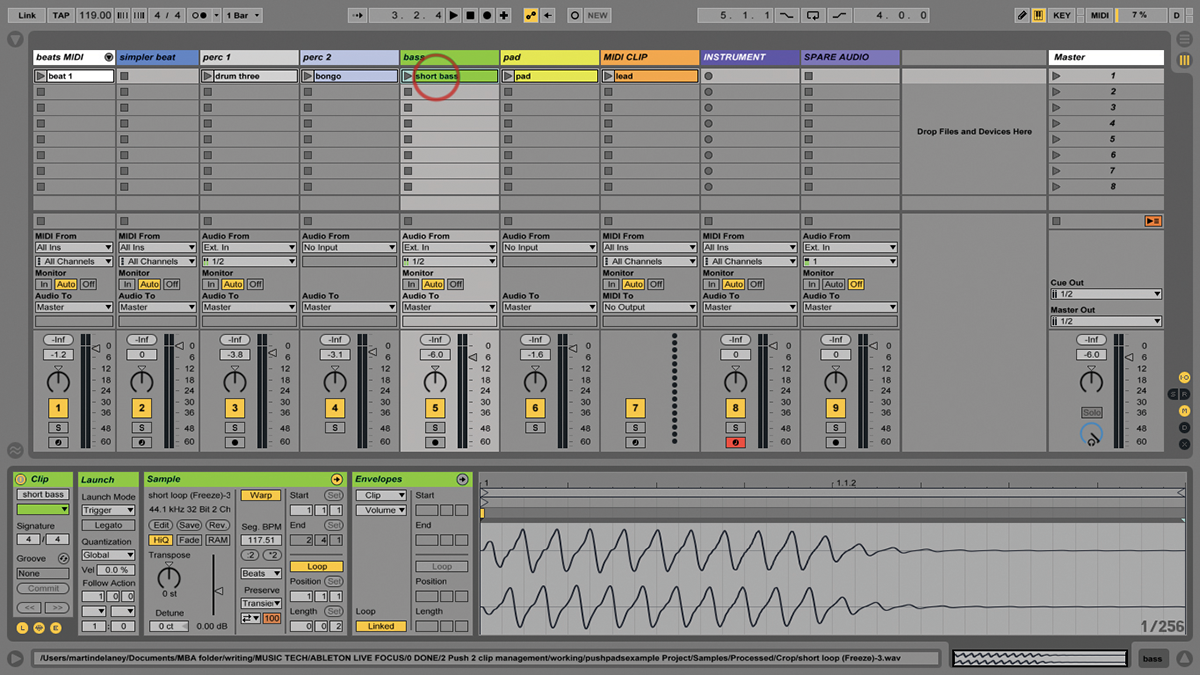 1: As usual, we’ve provided an example Live set. This one was created with Live 9.6.2, and you’ll be able to open it in any versions from that update. It’s unlikely to be backwards compatible.

2: Ableton has stated that because of the changes in 9.7’s Simpler modes, projects created in 9.7 will not be backwards-compatible with previous versions of Live. Consider yourself warned! 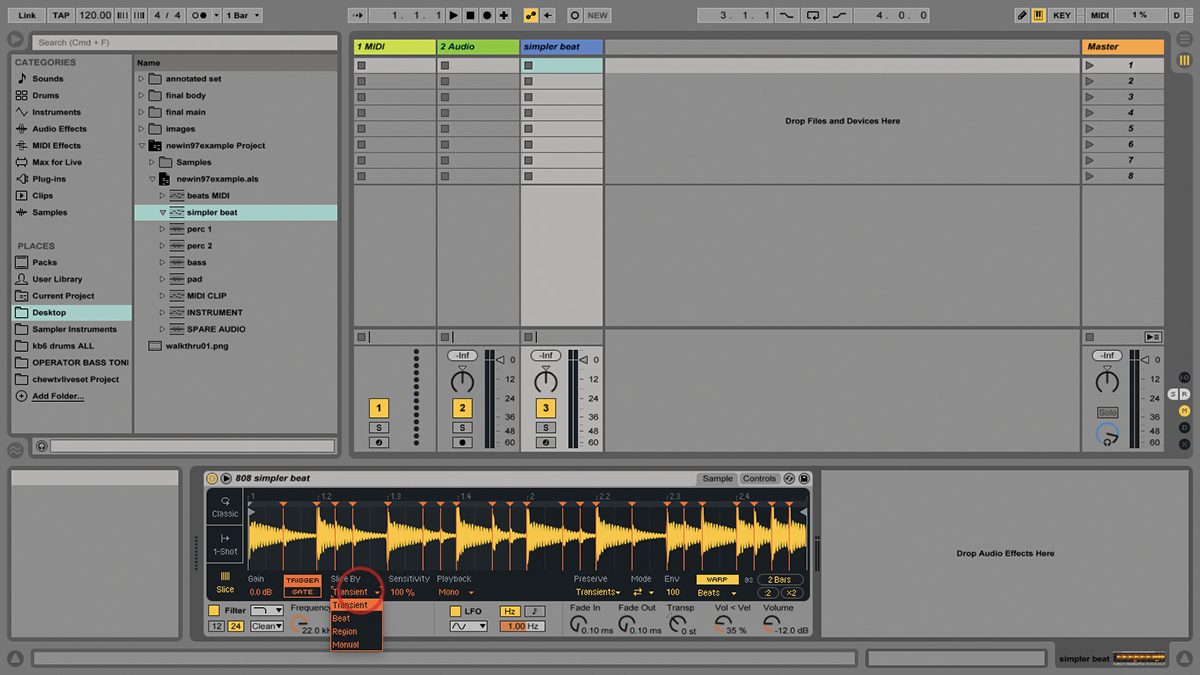 3: Simpler has more features and its relationship with Drum Racks and Push is more intimate. Expanding on Transient Slicing, the Slice By mode has three new options: Beat, Region and Manual. 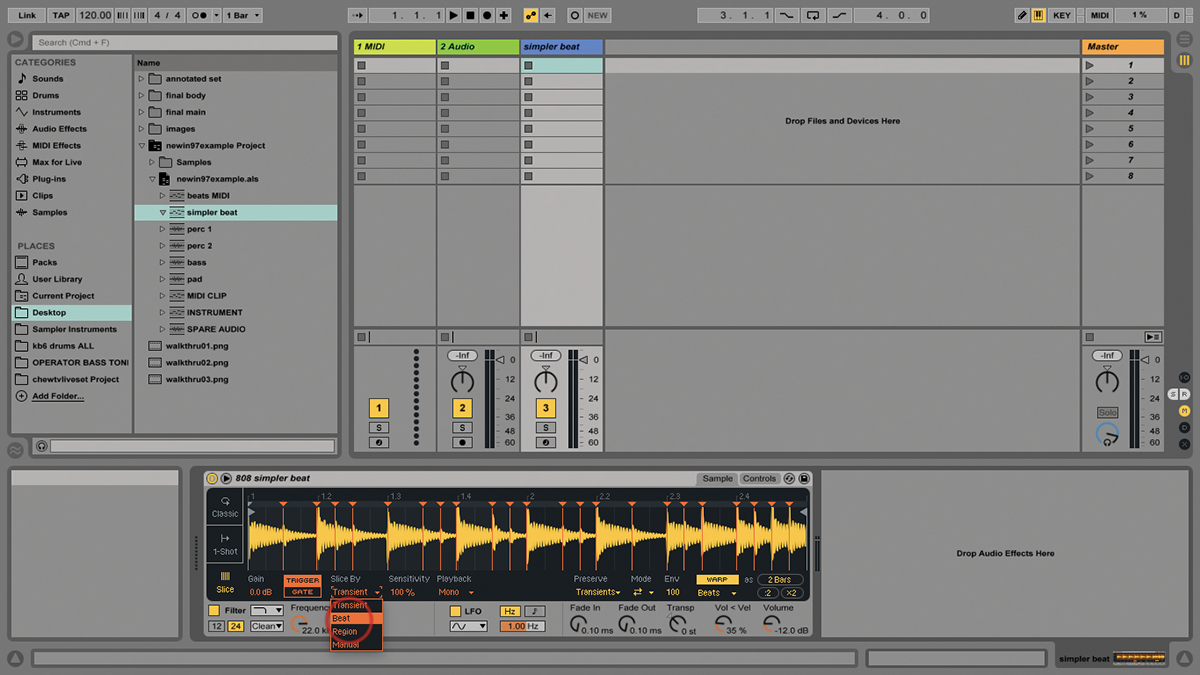 4: Slice By Beat lets you divide your sample with specific note selections rather than following the transients in the waveform, using values from as little as 1/16ths up to 4 bars. 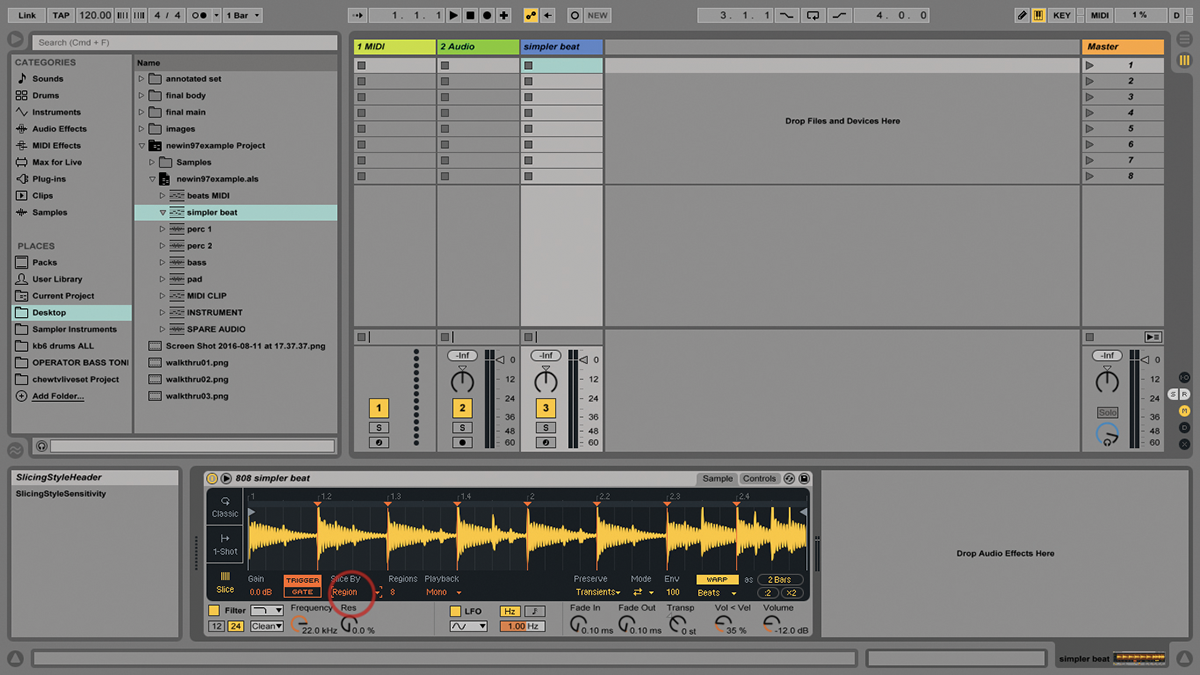 5: With Slice By Region, you can slice your sample into anything between two and 64 segments. These are only slight variations on the Slice By command, but in different situations, could be very useful. 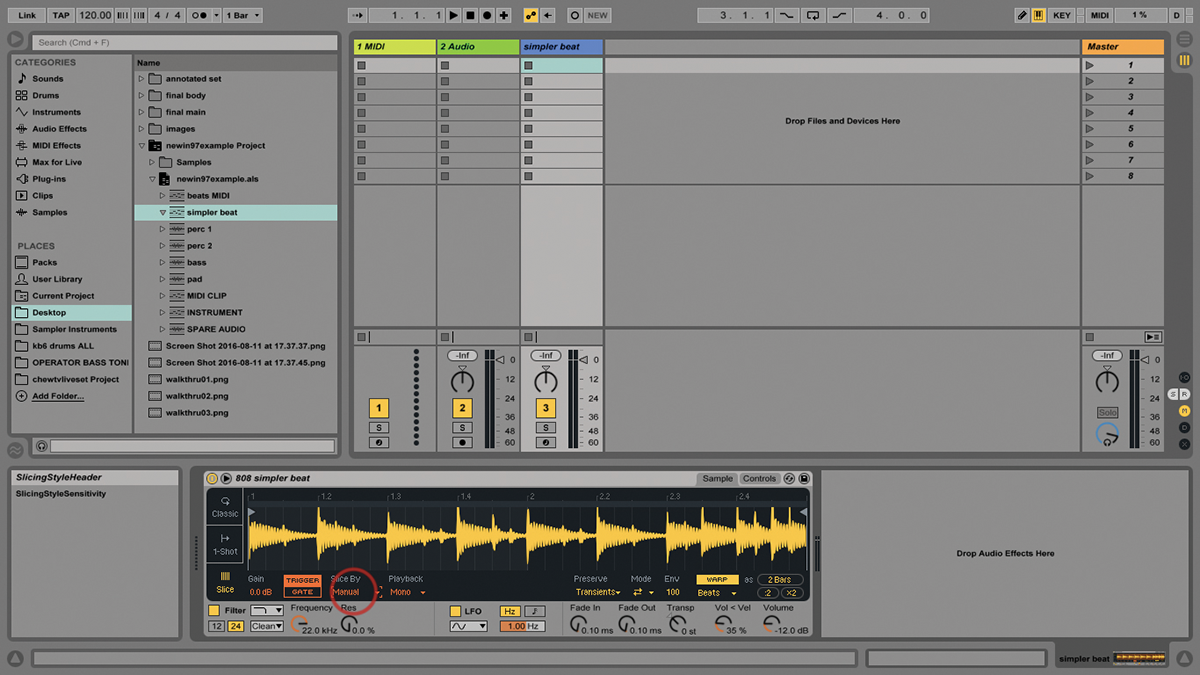 6: Finally, Slice By Manual gives you a clean slate, where no dividers are inserted automatically and you’re free to add your own by double-clicking on the Simpler sample display.