Andy Jones reports from the Yamaha reface launch in London and gets hands on with the company’s new keyboard range. There’s a surprising result and possibly even a smidgen of Star Wars… It’s Abbey Road… Again! Not only have we featured the world’s most iconic studio in MusicTech three times already this year, but I […] 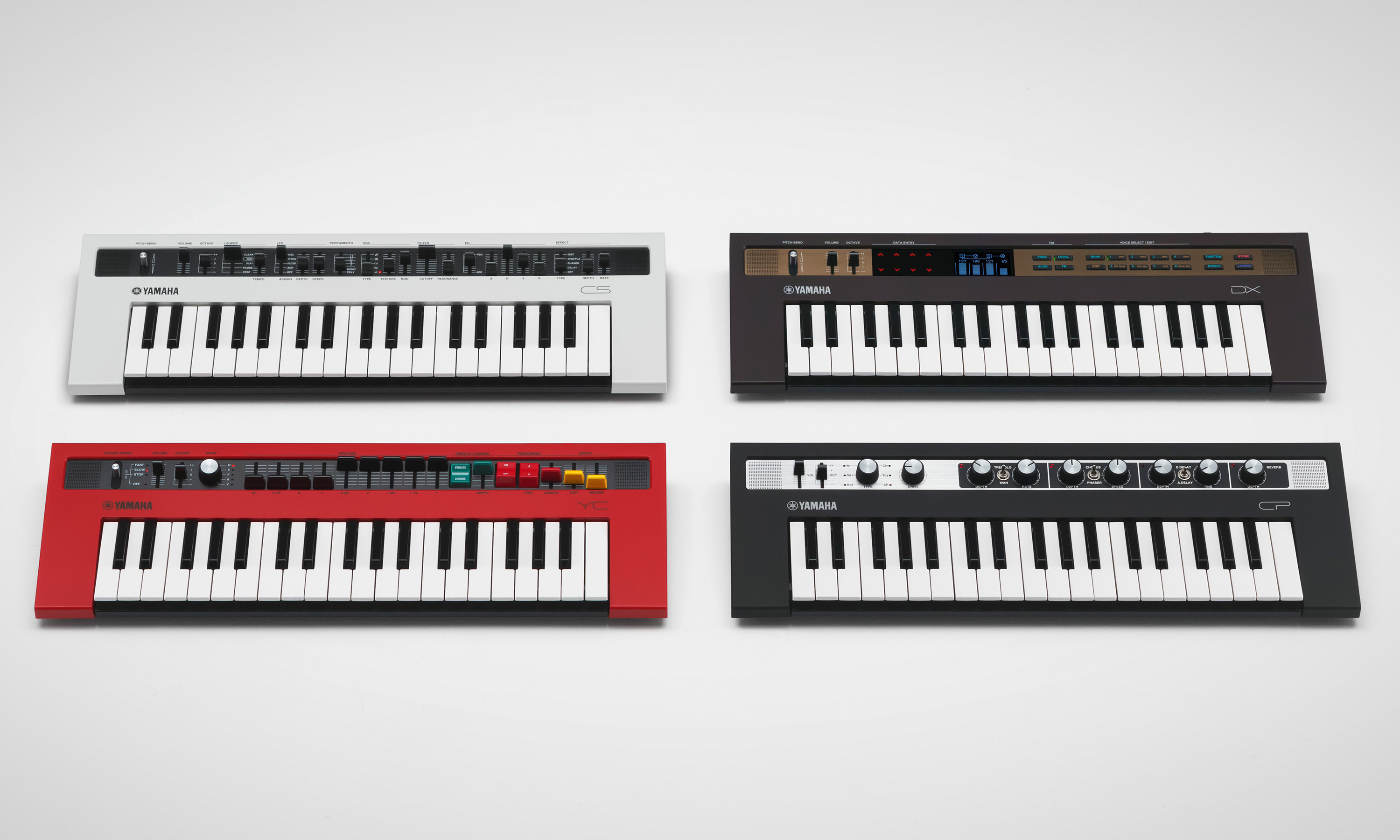 Andy Jones reports from the Yamaha reface launch in London and gets hands on with the company’s new keyboard range. There’s a surprising result and possibly even a smidgen of Star Wars…

It’s Abbey Road… Again! Not only have we featured the world’s most iconic studio in MusicTech three times already this year, but I seem to be walking through its doors more regularly than a Beatle in the 60s.

Obviously that isn’t true (even in my wildest dreams) but we are at London’s most prestigious studio again, this time for the launch of Yamaha’s new reface range of keyboards. As announced by us an hour before everyone else last week – by accident I hasten to add, er, sorry Yamaha – this new range of mini keyboards has already caused quite a stir among our readership (and not all of it good). But before more on that, a quick recap… 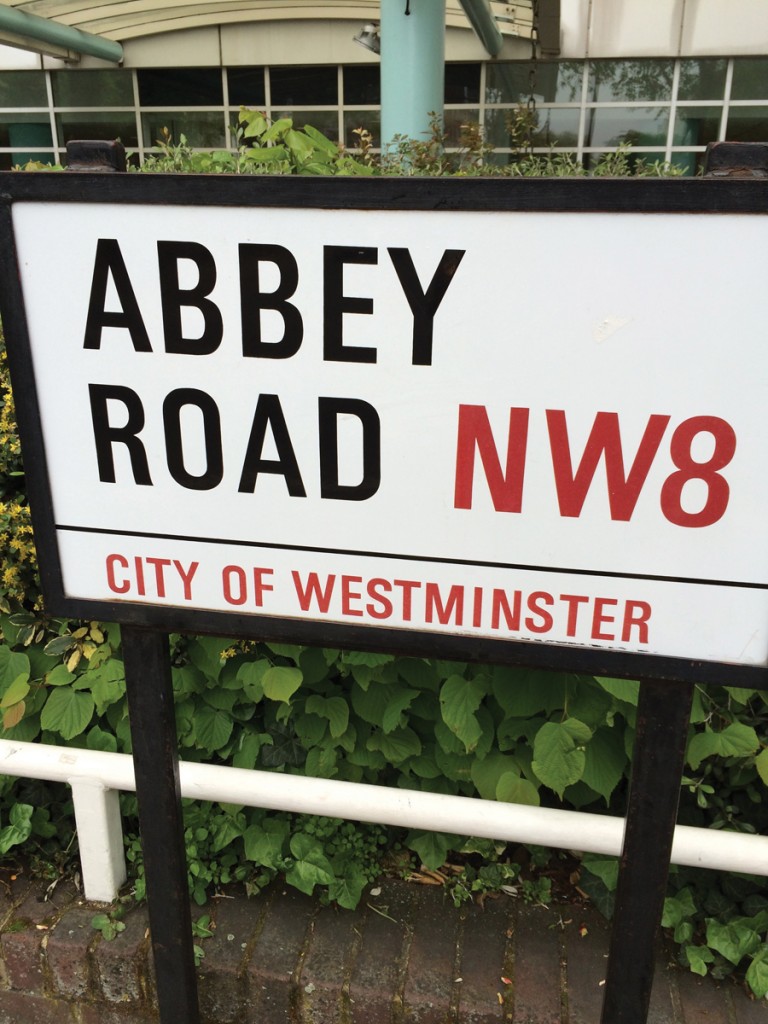 So reface is a range of mini keyboards, costing £347 a piece and each geared towards a specific classic retro Yamaha sound. You get reface DX, which is packed full of DX sounds, reface CP for classic 70s Yamaha piano, reface YC for ‘classic 60s transistor-to-tonewheel organ sounds’ and finally reface CS for classic analogue sounds by way of ‘five super-flexible oscillator modules’ and a virtual analogue engine.

It’s a quite straightforward and compelling story so far, and each keyboard is as distinctive in looks as it is in sound with the YC, for example, a cool red and the DX looking, let’s be honest, as dull as a DX should. So we have a range that is tailored to specific uses although Yamaha wants each to be seen as a playing and tweaking standalone instrument. And, as we soon find out, the company is taking this launch about as seriously as anyone has taken any launch in our industry in about two decades… 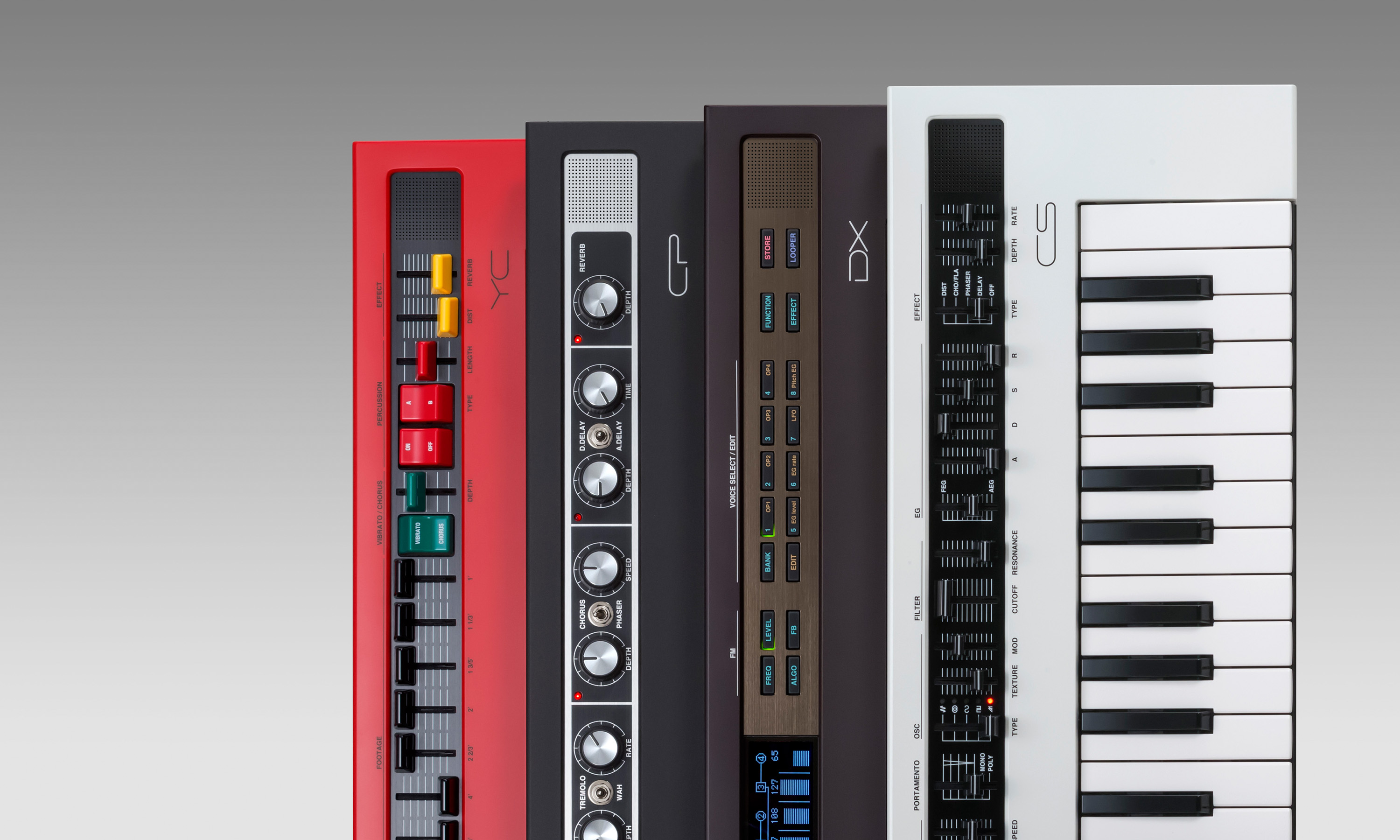 The fact that we’re at Abbey Road and the fact that the whole launch show – for that is what it turns out to be – is to last for a good two hours, means that this a BIG launch. To give you an idea of how big: Yamaha has booked out Studio 2 – that’s The Beatles’ old studio for anyone who hasn’t been reading MusicTech this year.

It’s like a school gymnasium packed full of old and new equipment, much of it used by many legends in music production. As we’re sitting through Yamaha’s presentation, next door in Studio 1 – an even larger space – is an orchestra. No-one is allowed near them, nor any pictures to be taken. We’re not even allowed to share the bar with them and talk to them.

As Abbey Road is famous for film score recordings (like the Raiders films, The Hobbit and many more) rumours quickly start – mostly spread by me, I hasten to add – that the orchestra must be recording the theme to Star Wars 7 which ‘must be’ being recorded about now. (We even try and sneak in during their break to see if they’ve left the pictures running that they’re playing along to, but we are not allowed even close.)

So you could conclude – if you want to stretch things a little and wedge the words ‘Star Wars 7’ into your title for search engine purposes – that this is as big a launch in music technology circles as Star Wars 7 is in film circles.

OK I’m pushing it a little but as well as MusicTech, Yamaha has invited the broadsheets, the tabloids and I even spot one of the presenters from The Gadget Show (apparently an avid synth collector himself) later on and have to barge him out of the way to try the DX keyboard. So this is as big as it gets, and the reaction to the keyboards by the public at large has been pretty big too, some complementary, but a lot of people complaining about the price and the mini keyboard nature of the range… 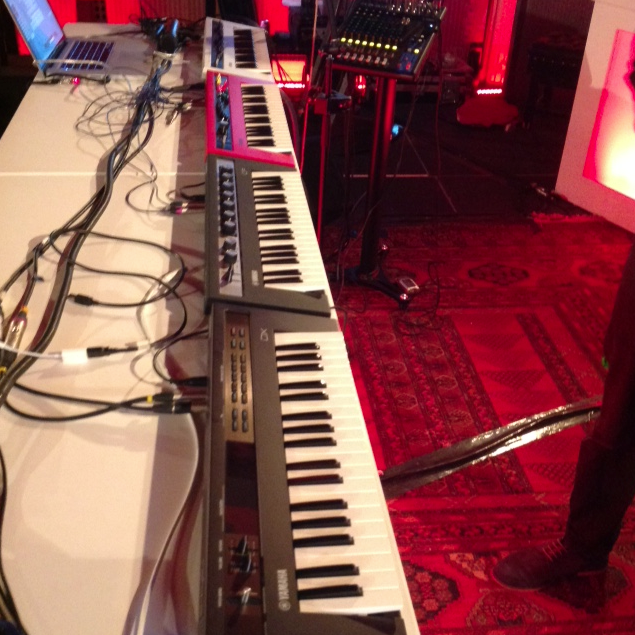 As if to fend off that first point I’m told a couple of times that the street price of each is more likely to be £289 – confirmed by several Google searches this morning – with one dealer quoting figures even lower. So now we’re clearly talking mass market – this really is a keyboard range aimed at everyone, perhaps not just (or even?) the studio producer. I have to wait to get some proper first impressions, though, as the main event is about to start…

So to the launch itself and we’re treated to several demos and talks, including one about how the idea of the range was born from three Yamaha engineers working evenings, out on a limb from their day jobs, to come up with the concept.

Essentially what they reveal is that they wanted to come up with four retro keyboards that are more instruments in their own right that you can jam with, play anywhere and really interact with for some great sounds, and do all of the above with ease.

So the DX one is more accessible than your average DX7 (thank God) and includes touch ribbon controllers; the CS one is a simplified analogue; each keyboard comes with a variety of effects; and interaction and editing is encouraged. ‘We want users to mess about,’ is a phrase that the world’s most informative and amusing demonstrator, Bert Smorenburg comes up several times during his section of the launch.

We are also treated to some acts doing just that. A few hiccups aside – one of which confirms that battery power is indeed an option – the overall impression after a couple of hours is one of a great sound and solid hands-on control over it.

We get a quite breathtaking medley of songs, classics and modern alike, by a solo performer playing the refaces as lead parts to a backing track, which not only showcases the era they hark back to but highlights some great new tunes for a more modern context. Then a dance duo put on what can only be described as a funk-laden, building and quite mesmeric routine that sounds a heck of a lot better than what I’ve just described it as. Quite brilliant in fact. 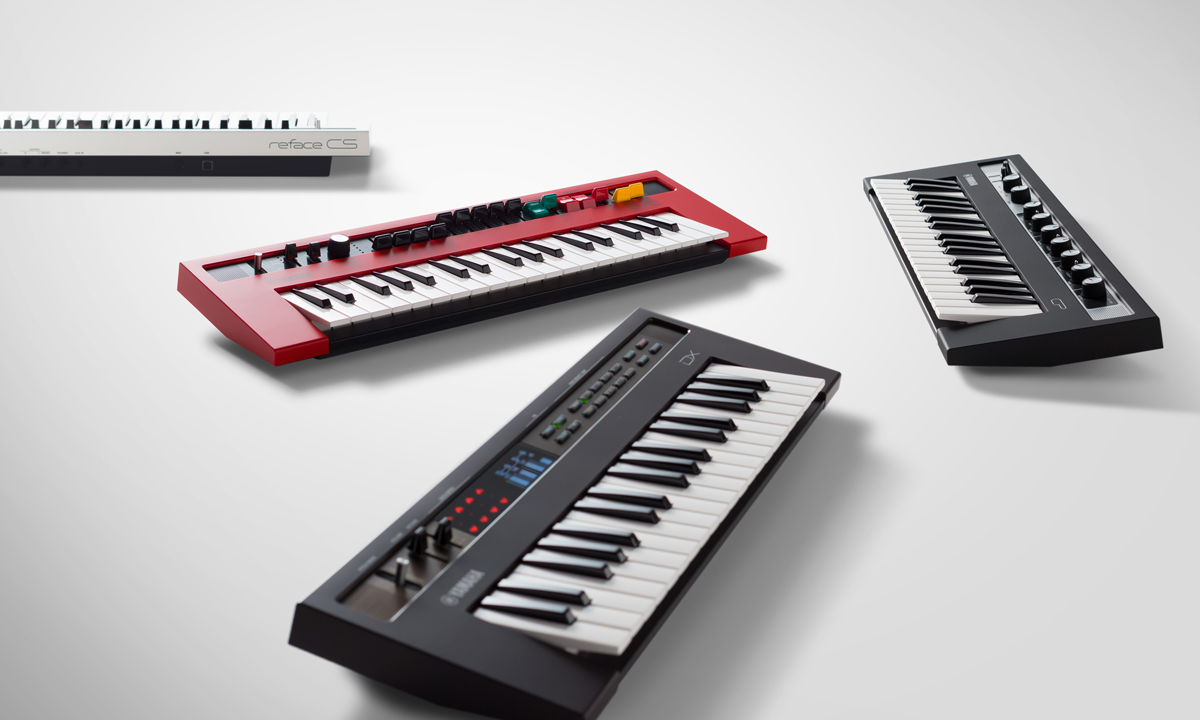 We even get a talk on Abbey Road and its history, just to throw that in there in case any of the invited journalists aren’t aware of ‘the B-word’ (at this point I am ready to hand out copies of MusicTech).

But it’s after the assembled throng leaves that things get interesting. A few of the range are set up for more intimate auditions and I find myself next to that chap from the Gadget Show, he on the DX one and me on the CS.

To be honest, by this point I’ve already made my mind up which ones I want to review in MusicTech and it won’t surprise you – if you know anything about my love of synths – that I have the DX and CS models on that reviews shopping list. But the following hands-on playing changes my impressions, quite surprisingly…

The CS is a very tweakable machine that relies on getting straight in there and creating a sound from scratch and there were certainly enough options to do just that. There are no presets, just start moving the 20-odd sliders for some instant action.

There are plenty of obvious synth options (filter, resonance, LFO, ADSR sliders) plus four effects (delay, flanger, phaser and distortion) which really do dirty the sound up from a fairly tame start. This is one to work with and I can see you using it in conjunction with a laptop just to keep your creations in tow with additional editing software. I’d have liked on-board presets to do this but these are on my next keyboard as it’s now a case of barging a few people aside to give reface DX a go. 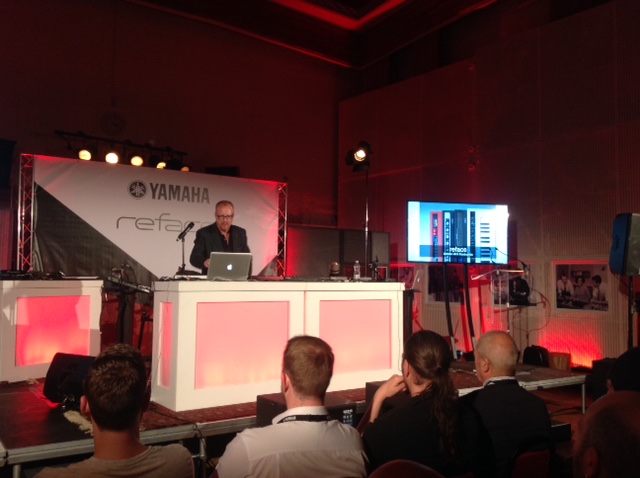 This time 32 presets give you an idea of the breadth of the sonics on the original. Anyone familiar with Yamaha’s DX synths will know their strengths lie in bells, hits, pianos and pads and they are all present and correct on reface DX. But I don’t remember the DX range for its tearing dubstep basses some of which are also here.

I can see why Yamaha has included them – these keyboards are very much aimed at all generations not just those, like me, who remember the originals – but I can’t help thinking that wedging a bit of dubstep in there does smack a little of your dad dancing. (Or me dancing come to that.)

Those aside, the sounds definitely ring true to the original but the best part is the tweaking. With four touch sliders to the left of the screen you can easily adjust some of the prime FM parameters and effects for some very instant sonic juggling, although these sliders do take a little getting used to. So I’m starting to ‘get’ the jamming and instant interactivity appeal that Yamaha is trying to sell with this range. But there’s more…

Onto the final one that I get to try (the reface YC organ is the busiest of the bunch and I don’t get hands on with it but the demo reveals a suprisingly big and powerful sound from such a small machine) and it’s now the turn of the reface CP piano.

I’d expected just to ride quickly through the five types of piano, switch it off and put my name down for reviews of the CS and DX models but on playing the CP and combining the sounds with the effects I quickly become quite captivated by the sound and actually playing the thing. It offers pianos, of course, but the effects and parameter tweaks take you to other places entirely and it’s very easy to create amazing soundscapes, repeats and dead cool riffs and melodies. 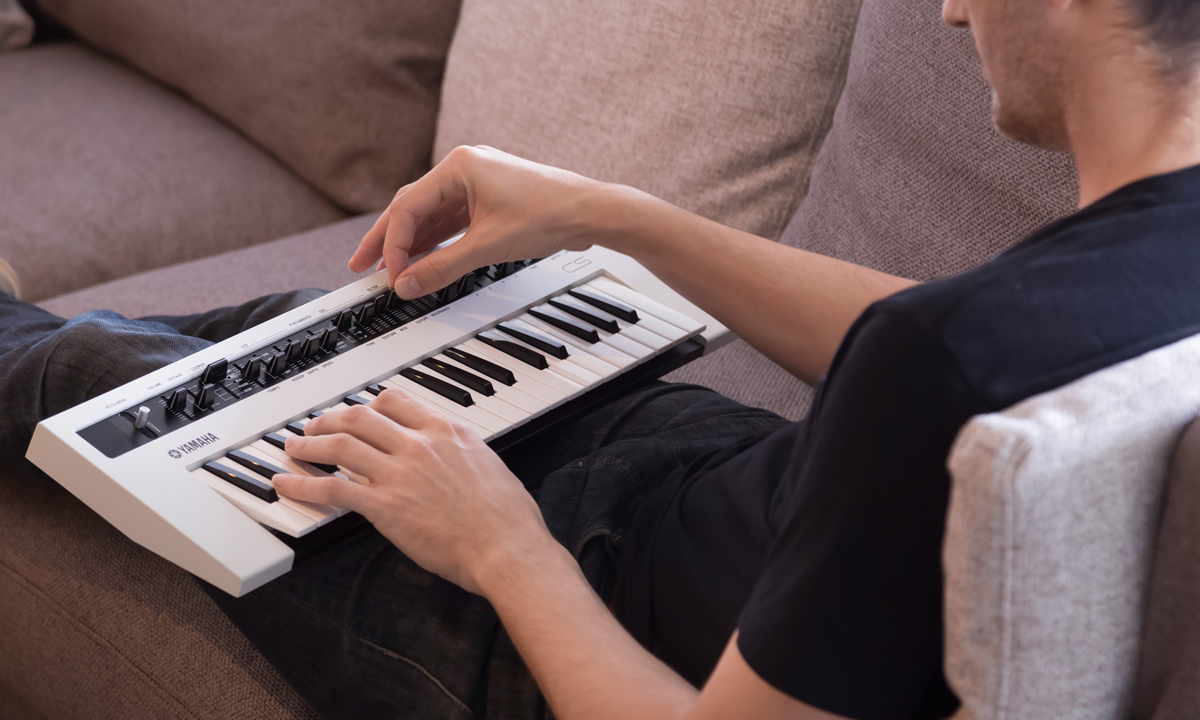 Interestingly I don’t feel limited by the mini keys either and the keyboard is very responsive to changes in velocity. The effects are the winners here, though, as each – tremolo, chorus, delay and reverb – has its own set of big dials with all bar the reverb having controls for both depth and speed/rate/time. It’s all very hands on and will have you, like me, playing for more time than you’d planned, which is probably what Yamaha’s intentions are for the whole range…

So impressions are good if a little surprising. Of course you might think that reface is either a very safe bet for Yamaha or shameless, retro bandwagon jumping. The truth is, of course, that it’s a bit of both, but there’s sufficient on offer here to draw in a bigger audience than just a bunch of nostalgic old journalists like me.

I can’t wait to get my hands on the piano one, in particular, for a full review which we should be able to bring you in a few weeks time here at MusicTech.

Read more about the tech specs of each instrument in our original news story here.