Andy Jones continues his huge exclusive review of Yamaha’s Montage synth… Performances The performances are the very heart of Montage, as I hinted at in last month’s hands-on preview. They are used to create pretty much everything here. You can get massive groups for Live Sets where performances are listed together on one screen (see […] 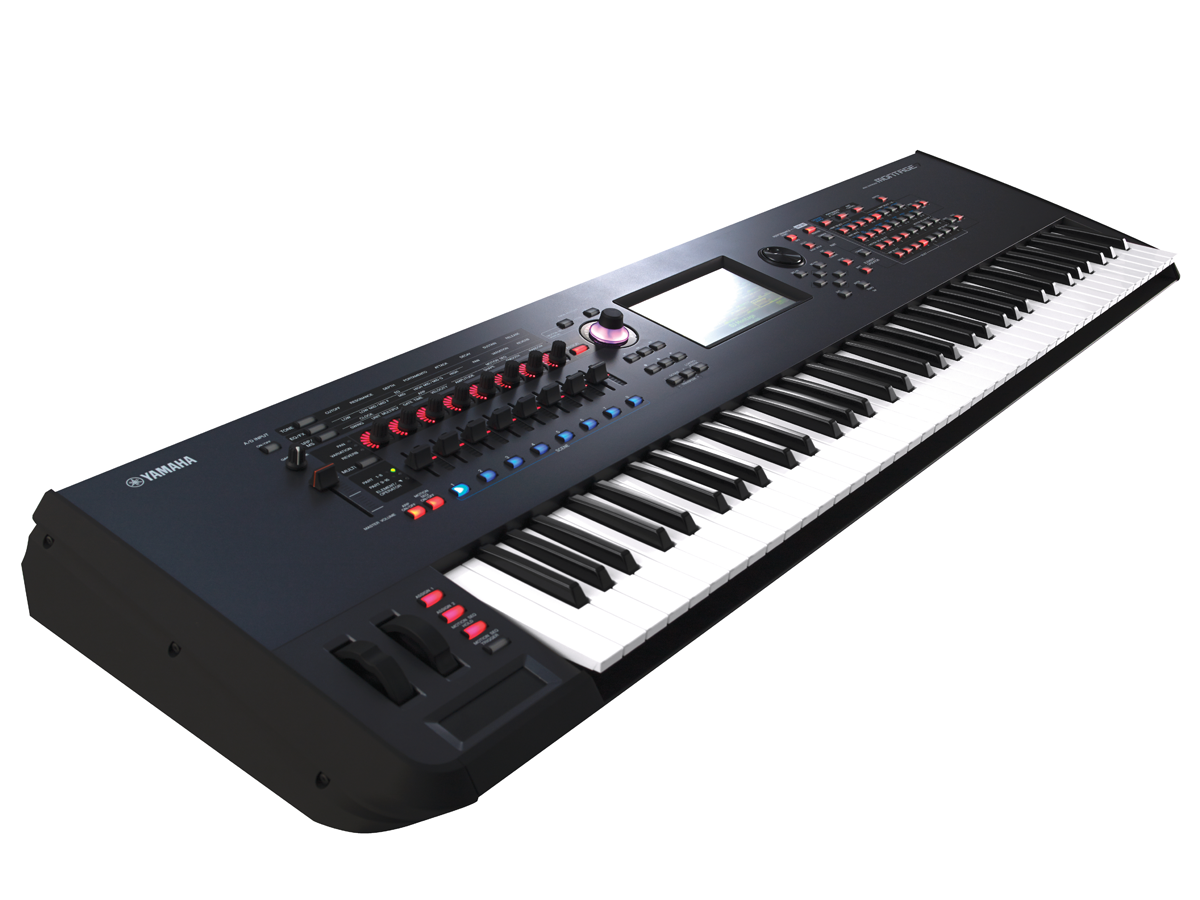 Performances
The performances are the very heart of Montage, as I hinted at in last month’s hands-on preview. They are used to create pretty much everything here.

You can get massive groups for Live Sets where performances are listed together on one screen (see the screen shot on page 64) and can be called up at the touch of a button. Performances within a Live Set can each represent, for example, a song within a set (Live Set!), or even parts of a song (verse or chorus).

On a simpler level, performances can also exist on their own in Performance Mode as individual groups of sounds – ‘multitimbral setups’, for those of you of a certain age – to be played in one go, possibly split across the keyboard, or as we used to play them with different sounds triggered by different MIDI channels to create complete songs.

So in Performance Mode, you’ll be treated to mostly either great washes of atmosphere (with lots of movement or rhythmic parts underpinning them or drifting in and out), or simply stunning individual sounds, which are made up of several constituent parts to add realism.

What I mean – and I realise I am, perhaps a little unfairly, trying to categorise a huge part of Montage – is that these performances make Montage excel at both the real and imaginary sounds and soundscapes. Performances will be like nothing you have heard before, especially with that Motion Sequencing – this is a sound designer’s dream – but they will also be as real as you can imagine.

An electric piano sound, as an example, might be a performance made of a couple of AWM piano samples to give it huge body, and then maybe another part of the performance might be a sample of the attack, or the physical sound of the cabinet. Everything has that detail and if it doesn’t, there’s certainly room to add realism… or plenty of unrealism.

You might be drifting away from me here, as I realise I’m trying to describe the most important part of Montage in perhaps overly simplistic terms. So what I will do instead, rather than trying to describe the Performance Section overall – which is pretty impossible given how many there are – is detail a few at random. I’ll dial each in and explain how they sound, as this will give a flavour of the keyboard.

Imagine, then, that I’m in Performance Mode and I’m dialling the large dial to the right of the screen fast and stopping at a random performance. Here goes…

My Random Journey
So the first one I dialled up is called Slow and Steady. On part 1 is a High String sound, which plays on the top half of the keyboard. Part 2 has a Low Pad sound that plays on the lower half. Low Pad plus High Strings obviously equals a nice, big lush sound; but this being Montage, there is a kick sequence that comes in when you hit a key, which adds a certain soundtrack menace.

The beast that is Montage 8 (and the one we had in on test). The piano action is great, as is the weight, and you do pay a premium for it: a full £700 more than for the 6

Then you realise that hitting a key on the upper side brings in a percussive sequence that plays in time. Hey presto, instant soundtrack. Before you think, ‘hey, that’s a bit presumptuous, adding beats in where I don’t want them’, remember that a) there are tons of performances, many of which don’t do this and b) you have those eight Scenes to utilise per performance, so you can edit the beats out.

These are shown in full flow with the next random performance I dial up, which is called Chilomatik. I’m on Scene number 1 of 8 and I can see it has four parts again: two pads across the first two, but nothing on parts 3 and 4 as yet. Go to Scene 2 within this performance, though, and parts 3 and 4 kick in, so you end up with a chilled sequence and beats, again in time with what you play.

Again, it’s made of four parts and the Scenes have little effect this time, as the performance is always playing all four parts simultaneously, for a huge throbbing, modulated DX-type soundscape. Random dial again, and next, it’s Choir/Strings/PipeOr and here we have two great choir sounds playing on their own at Scene 1 – some of the best choir samples you could ask for, in fact.

It’s easy to get variations like these within a performance (and easy to set up yourself), but hearing them in action so quickly and simply like this, well, it takes you by surprise. You think a performance is sounding pretty darn good already, until you switch a Scene and then, boom, it sounds even better.

Imaginary to Real
So far, you’ve witnessed soundtrack and fantastical performances in my random journey. The next is very much in the ‘real emulation’ camp. Hybrid Cellos is simple: just two parts, but the Cello section and FM Strings Ensemble parts blend to produce fantastic strings. This is one of those ones I mentioned that simply layers more of the same kinds of sounds together to produce ultra-real ‘proper’ or acoustic-type instruments.

The next random one, Rich Strings, does exactly the same by blending two string sections over two parts. Indeed, the most realistic sounds seem to be those where they don’t go overboard in terms of part counts and just use a couple of superb sounds to great effect. Of particular note in this regard are some of the guitar performances, particularly the excellent steel sounds.

Needless to say, the keyboard sounds are all exceptional, too, whether standalone or within performances. Again, they don’t use many parts per performance to get their points across and the organ ones score particularly well, as do the electric pianos.

As I had the 88-note Montage in for review, it was only right that I spent a lot of time with these ones – and that I duly did, getting truly lost in performances like CFX Pop Studio Grand and CFXW Concert – they give you all of the nuanced piano playing you could ask for.

Also worth mentioning in the ‘real’ stakes are the many and varied drum kit performances. Brazilian, Arabic, Kraftwerk-like, Glitch, Scratch… you name it, there’s a kit for it on Montage. We’re not just talking 12 sounds spread across an octave of notes. Here, you get oodles of different sounds or subtle kit variations spread across many octaves.

It Even Does…
My final ‘real’ performance is, again, one dialled at random, called Orchestral Brass. This one does something which I don’t believe synths should really be used for: namely, creating brass sounds.

For the last 25 years, I’ve wrestled with analogue synths trying to emulate brass (why, FFS!??), digital synths trying to sample brass (noooooooo!!!) and, of course, with a keyboard that does everything, I’m bound to find a performance on it that does brass.

Trust me to stumble upon it by accident. Anyway, this one has six parts: trombone, horn section, trumpet section, solo trombone, solo french horn and solo trumpet. And you know what? With six times the parts and all that sampling power, Montage almost does what others before it have failed at – decent brass. There. I’ve said it. Let’s move on and never speak of this again…

Back to the Screen
Of course, I could go on and on dialling up more performances, but you should get the drift by now. There really is something in there for whatever kind of music you make and sounds you want: real, unreal, past and future.

As I’ve been dialling through these performances, though, something has struck me. I’ve been using the screen almost without thinking about it and it’s only now I realise that it’s become part of the whole Montage experience without being a thing I had to learn to do.

Parts are laid out like sequencer mixers’ in terms of looks (not in terms of dialling volume levels – you use the physical dials for that) and it’s so easy just to scoot across, solo’ing, muting and adding as you go, that you almost forget you’re using a touch screen.

Use the screen in conjunction with the handy Part Select keys to its right, and you can easily edit performances, changing parts within them by genre. Return to the touch screen to add or subtract parts and you then find yourself using touch and ‘traditional’ controls as one.

Using the screen to select performance types is even more of a joy. I had imagined the ‘software selection way’ of choosing sounds by genre – as soft synths such as FM7/8 do, where you eventually home in on a sound – might be a touch too much to ask of a piece of hardware. Indeed,

I was already prepping a negative volley Montage’s way about this before I dialled up the Category Search button within Performance Mode. I should have realised it is, of course, for searching by category…

The top half of the screen is taken up by the top layer of categories, from pianos to synths, and then the middle line is taken up by sub categories to home in on a more specific sound. At the bottom, every performance is listed that fits the bill and you simply tap each to audition them – abso-bloody-lutely brilliant.

It really is a highlight of the keyboard, and just sums up how cool the screen is. It truly integrates with everything else and even with my big fingers, I didn’t struggle at all – this screen truly is one of the best features on the keyboard.