It’s tough being a digital synth in a world full of reborn analogue and modular systems. Tough, that is, unless you can do everything they can do and more (not to mention everything your software can do, too). Andy Jones tests possibly the biggest synth ever made and a beacon in a world that has […]

It’s tough being a digital synth in a world full of reborn analogue and modular systems. Tough, that is, unless you can do everything they can do and more (not to mention everything your software can do, too). Andy Jones tests possibly the biggest synth ever made and a beacon in a world that has gone retro mad…

There’s no doubting that the hardware synth is back. Witness the Eurorack phenomenon, the number of big companies exploring analogue options (Roland, Korg, Arturia) and the number of classic brands reborn (Oberheim, Sequential, even Moog took a break for a while). This year’s NAMM Show threw them at us wherever we walked down those crowded aisles of new gear releases.

Where once the NAMM Show was about software emulations or ‘iPad everything’, the last couple have been about turning real knobs and switching real gear back on.

Arguably, it’s all part of a (perhaps) unconscious move by the production world to bring creativity out of a virtual environment back into a real one, with the software companies that once ploughed those pirate-laden waters now in on the act, creating hardware to seamlessly integrate their titles into a real, ‘non computer screen’ way (inMusic’s VIP, Ableton’s Push, NI’s Komplete Kontrol and Novation’s Launch range being perfect examples).

But one casualty of the rebirth of classic analogue synthesis (or perfect analogue emulation thereof), and the seamless marriage and transparency of studio hardware and software, has been the digital synth. And when I say ‘digital’, I mean the type crammed with sounds, packed with features and also stuffed with enough gubbins to create complete productions, soundtracks, and albums in any genre, on any format, any time, any place.

These once-lauded ‘machines that can do everything’ were already taking a beating from DAWs that could also do everything; and then along came analogue and seamless integration and the poor machines were left out of the party, stuck betwixt stools and as out of place as mullets in a Shoreditch beard competition. 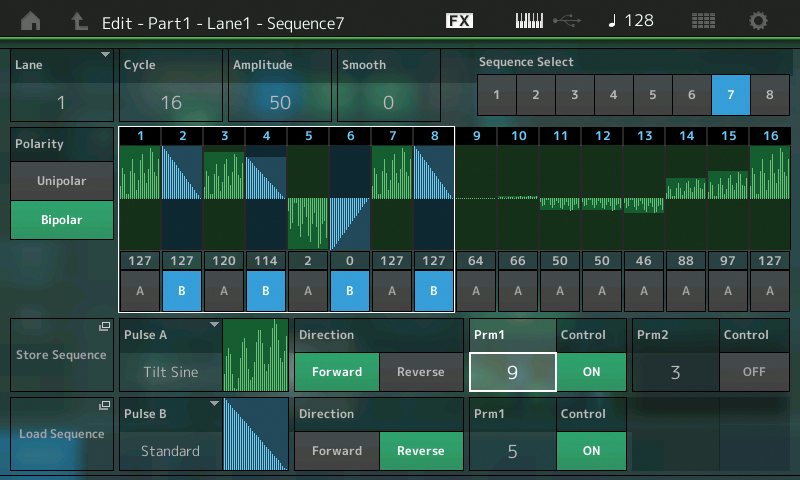 The Motion Sequencer is one of the main draws of Montage, enabling you to edit lanes within parts within Performances. Think DAW automation within sounds…

The digital synth in 2016 has a lot to contend with. It has to integrate within a DAW setup (and not particularly bother about being a workstation in its own right); it has to have more controls than its trendy young analogue counterparts; it has to operate better than a computer, plus it has to have more sounds than an entire suite of software.

Is that really possible in just one keyboard? As a Top Gear presenter might say at this point: ‘Enter Montage, from Yamaha…’

a: ‘Motif Style’ Parameters – Stolen from the MOTIF, this is one of the best ways to select parameters and get hands-on, short of having an analogue front panel.

b: Eight Rotaries and Sliders – Change all the parameters you choose with these rotaries and sliders – these can also adjust levels and other data within a Performance.

c: Super Knob – No laughing at the back please, as Super Knob allows you to adjust multiple values with one tweak and you can adjust them in any direction.

d: Main Selection Area – You can adjust data values here – ie whatever is selected on screen – with either the main rotary dial or inc/dec button

e: Scene Area – Scenes are most useful in Performances to select variations of a current multi-setup, so you might select ones with extra sounds or different levels.

f: Screen – The best thing we can say about this is that after a while, we didn’t realise we were using it. It helps your Montage experience 100 per cent, and is the keyboard’s key strength

g: Performance Select – The Performances are really the heart and soul of Montage, and it’s here where you can select them directly, together with the parts that make them up.

h: Motion Sequencer/ARP – For us, the Motion Sequencer is up there with the screen and Super Knob as one of the most important parts of Montage. Sounds you would not believe can be created with it…

Montage is huge, not just in terms of its size (the 88-note in particular) and its sonic arsenal, but also in terms of its scope. Yamaha knows that its digital synths have to deliver – and this is the new mothership that promises to do just that, with hands-on controls, with huge sounds, with two synth engines, with a Motion Sequencer and with a massive and brilliant screen at its centre.

We’ll come on to this later, although not specifically, as its beauty lies in the fact that it is just there and you use it. It’s not a feature that you need to learn, it just does its thing well, like it’s been there for years.

Before that, we should talk sounds and Montage power. Specs-wise, I could go on and on – Montage really has big numbers backing it. There are those two main synth engines: AWM2 and FM-X beneath an umbrella heading called The Motion Control Synthesis Engine. AWM2 is Yamaha’s latest sample-based engine – think high-quality sounds of everything and you’ll be close.

It’s a library that’s 5.67GB in size. Of course, Hans Zimmer sample library users who have to clear around 200GB every time they want to play some of his percussion sounds might scoff at a mere 5.75GB, but when I tell you that this is eight times the size of the library on Yamaha’s MOTIF series – itself the standard bearer for digital synthesisers for a decade or so – you’ll realise this is quite a leap up, to say the least. (Not to mention my Roland D-20 did all of its sounds in around 32MB ‘back in the day’ – we’re talking huge now!).

Then there’s the all-new FM-X engine which, as you’d expect, offers a huge array of FM sounds, a synthesis championed and made famous by Yamaha with the DX7 and now being used across all sorts of genres: from dubstep to shoegazing post-rock.

This is the rear view of Montage 6, the smallest synth in the Montage range. As with the others, it comes with four main outs, USB (audio/MIDI), MIDI connections and audio input

Montage Controls
Montage is all about these sounds,yes, but it is also about new ways of controlling them and playing them. For the control side of things, I’ll first touch briefly on the left hand area of the keyboard. In my preview, I detailed how this is similar to MOTIF’s way of giving you more hands-on control – perhaps the best you’ll find on any digital synth.

You can switch between three layers of eight commonly accessed parameters (think filter cutoff and resonance, EQ bands and arpeggiation) and then make adjustments with the dials and sliders below them. It’s very easy to home in on a particular parameter and tweak it live or edit it. That’s just the start of the control side of things with Montage, though…

Underneath these, you have another eight buttons, lit blue, for Scenes. As we’ll see in the Performance Mode, these enable you to switch between setups of sounds: you might be playing a piano with strings underpinning it on one Scene, and then switch to another Scene and the string goes, or a choir appears. Scenes essentially give you variations within performances, increasing sonic flexibility at the flick of a button.

But if you think that’s cool, try the Super Knob. This was the star of the launch of Montage at NAMM, a brightly lit dial to the left of the touch screen that alters a number of parameters simultaneously, so you could fade both cutoff and resonance, for example, or fade one up while the other goes down, all with one sweep of the knob!

It’s also easy to assign these using the Knob Position and Assign buttons, so you can customise it to do what you want – even changing many FM parameters at once, something you wouldn’t have dreamed of doing with an original DX7 synth (unless you were prone to nightmares).

The above Scene edits can be made by way of Montage’s huge touch screen, as can Part Mixing within a performance. There’s even a basic Sequencer on the main Home page of the screen, although I won’t touch too much on that – as I said in last month’s preview, Yamaha doesn’t want Montage to be seen as a workstation. But within this Home page is also the Motion Control area, which is arguably the most important part of Montage.

This is an important part of the Motion Control engine, as it enables you to automate four parameters or lanes per Part of a Sequence. Here is where it gets very interesting, particularly if you’re into sound design and creation and want something a bit different, as this is where the dynamic variation to your sounds can come in (and out), how things evolve and how sounds can morph and change over time.

In truth, I struggled here at first – not so much with the concepts, but more with the options available and how to implement them. Once again, the touch screen makes peeling back the layers easy and really helped. Motion Control really is an area worth persevering with. Think about it: edit and automate four lanes per sound and 16 sounds per performance!

That makes for pretty big and moving sounds – it’s almost a synthesis on its own, and one you won’t find anywhere else.

Finally on the specs side – see I did say I could go on and on – we’re talking big polyphony. Montage has thousands of sounds of every description, and an incredible level of control over their parameters, but it also boasts enough notes to play them, as each engine has 128 notes of polyphony.

So you can play chords as large as you can physically muster or, better still, combine many sounds into a performance for complete songs or huge – and I mean huge – soundscapes. Which is a great introduction to the crux of Montage…