A serious player needs a serious instrument. Hollin Jones finds out if Yamaha’s CP4 has what it takes… Details Price  £1908 Contact Via website Web www.yamahasynth.com Amazon.co.uk Widgets Yamaha has been making digital stage pianos for many years, and of course also builds all kinds of real pianos from uprights to concert grands, making it […] 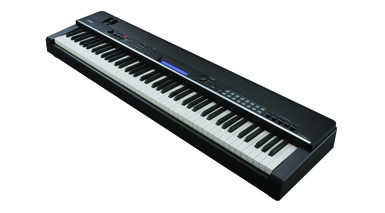 A serious player needs a serious instrument. Hollin Jones finds out if Yamaha’s CP4 has what it takes…

Yamaha has been making digital stage pianos for many years, and of course also builds all kinds of real pianos from uprights to concert grands, making it one of the few companies that can claim to have expertise in both electronic and acoustic piano design.

For the uninitiated, stage pianos are 88-key digital keyboards with weighted keys that place an emphasis on the playing experience as well as the sounds themselves.

They are, simply put, designed to be played on stage, although you can of course use them in other environments including your studio. Unlike workstations or controller keyboards they have a relatively small feature set, but concentrate on doing a few things well instead of trying to be all things to all people.

Look and Feel
The CP4 is surprisingly portable for a high-end stage piano, weighing in at 17.5kg. So unlike some with weighted keys it won’t tire you out too much when you’re carting it about. The design is ever so slightly retro, with a textured panel running across the top surface that adds a touch of class and is reminiscent of the vintage electric pianos of the 1970s. 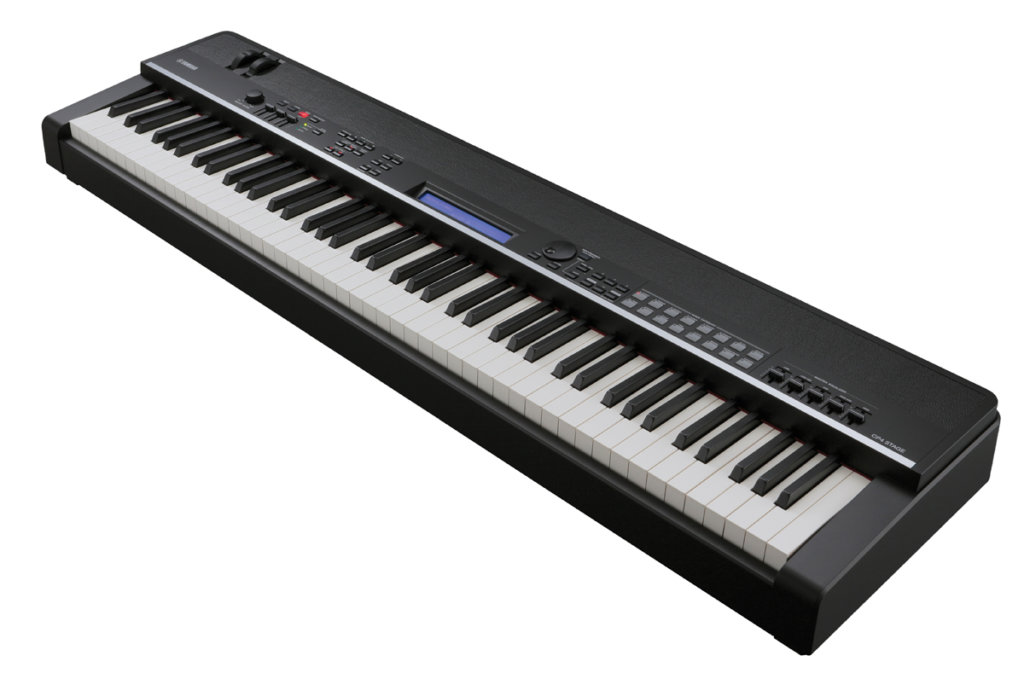 Otherwise the design is sleek and muted and all the features are well laid-out. On the rear panel you’ll find all the in and out stuff, starting with a pair of balanced XLR and one of unbalanced jack plug outputs. Proper XLRs are nice for connecting to more heavyweight PA systems and there’s also a headphone output, though this might be slightly more convenient were it located on the front edge somewhere.

There are two foot controller input jacks to which you might want to connect pedals for altering wah, volume or expression, and there’s also a sustain pedal input for connecting the supplied FC3 half-damper sustain pedal. Full marks to Yamaha for including a sustain pedal, which is a vital accessory for any kind of realistic piano playing.

You might think such an inclusion was a given for a flagship piano, but it hasn’t always been among some manufacturers. There’s also conventional 1×1 MIDI in and out ports and a stereo mini jack aux input for connecting an MP3 player or similar.

Two USB ports are also available: one for connecting to your PC or Mac for triggering virtual instruments, and the other is for connecting a USB thumb drive to store and exchange files with the keyboard. A file recorder is available with straightforward controls on the front panel including a metronome, and data is managed using the utility menu as is generally the case on these kinds of instruments. 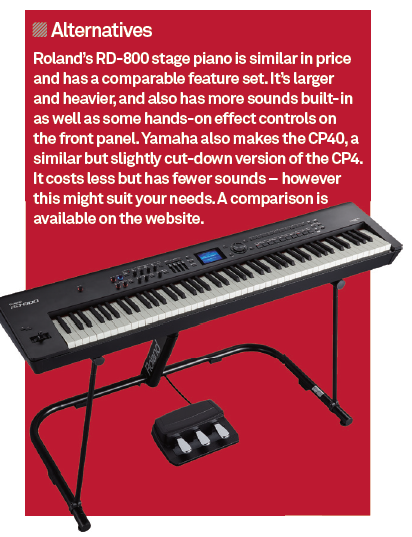 Making the Grade
The CP4 is unusual in having wooden keys covered in synthetic ivory and they play beautifully. There’s also a graded hammer action meaning that the lower keys are a little heavier and the higher ones a bit lighter, just like you would get on a real grand piano.

Impressively, although the piano action is realistic and responsive, it also doesn’t seem to put up too much resistance to runs when you’re playing electric piano and organ parts. Whether this is coincidental or a deliberate design decision isn’t clear but either way it’s very welcome. Different keyboard instruments can require very different playing styles, and making a keyboard that responds well to all of them can be very tricky, but Yamaha seems to have pulled it off here.

The front panel layout is fairly simple compared to workstations. This is actually a bonus since it means all the controls you need are at your fingertips, but you’re not going to be blinded by hundreds of buttons and pads when all you really want to do is play. There are 341 voices in total in the CP4 and these focus heavily on keyboards as you would expect. There are 45 grand and 47 electric pianos, with the remainder split between organs, clavis, strings, pads, synths and a few others.

Play it Again
If you’re buying an instrument like this, it’s the pianos and piano-based sounds you’re going to be really interested in. There are several models, each with variations like mono, compressed, dark and so on to suit your needs. First up are the CFX and CFIIIS pianos: rich, impressive and stately. With a room-filling sound they’re suitable for everything from classical to pop.

The S6 is a more intimate piano, suited to accompanying ballads or more stripped-down music, and the CP80 electric grand brings that classic sound to your performances.

The electric pianos are excellent too, with a variety of Rhodes and Wurlis on offer. These are lush and authentic and vary in character from clean through tremolo, chorused and distorted, so you can dial in the amount of dirt and soul you want, or tweak the amount of key noise for a cleaner sound. A DX7 model is also included for a classic 80s tone, and there are some great clavis and organs, though the Leslie effects aren’t quite the most impressive around. The remaining instruments cover percussion, pads, synths, strings and even some guitars.

These sounds – taken from the MOTIF synths – are nice to have, although a piano pretending to be a brass section or a guitar, even these days, still sounds a little artificial. Again though, you’re not going to buy this because of its guitar patches, but they could be handy to call on occasionally.

There’s a master EQ section on the front with five sliders for realtime manipulation of the signal. These can be really useful in live performance if you suddenly find your piano needs a bit more weight, or your clavi is too spiky at the top end. Physical transpose controls are also provided and visual feedback is via the small but perfectly adequate LCD screen where you also manage system setup and file operations.

The keyboard can be split and layered as you would expect for the purposes of dividing it into zones like a bass in the left hand and a piano in the right, or putting strings behind a piano sound and then balancing the volumes of the two. 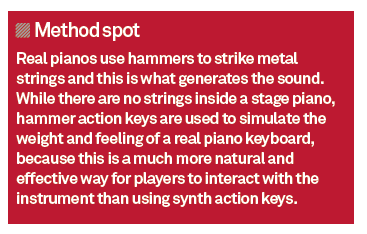 A further control section to the left lets you assign the function of three sliders. They can either alter volume, chorus or reverb levels for the currently selected part. Though you can dig down into a software menu to make more detailed changes to effects, it’s good to be able to do it in a second or two from here as well.

Speaking of effects, there are 62 VCM effects onboard including reverb, chorus, a five band master EQ and a compressor. Effects can be punched in and out for both parts and adding some master compression helps to give a boost to the overall output of the instrument.

The Next Stage?
The CP4 is an excellent stage piano and one of the most playable I’ve ever used. The keybed is accurate and responsive and manages to deal equally well with the differing playing styles required for piano and electric piano, and to a slightly lesser extent for organs too. For live performance you’ll find all the controls you need within easy reach and it’s remarkably portable while still feeling solid and well built.

The piano sounds are excellent, and while you won’t find anything particularly unusual or gritty, the grands are first rate. The electric pianos have soul and the organs and clavis round out the retro section. Synths, strings and the rest are useful to have and acquit themselves well, though it’s the keyboard instruments that are really the focus. 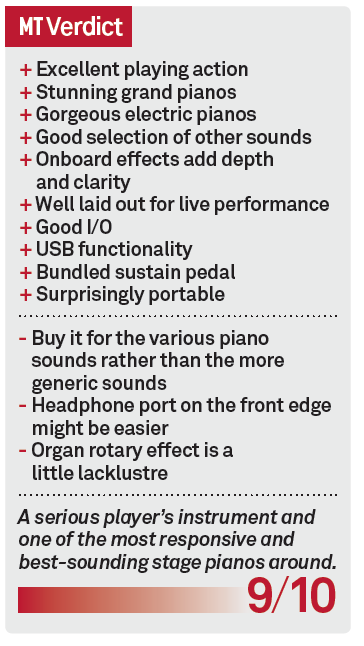