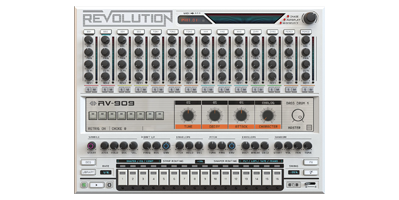 Can Wave Alchemy’s new Kontakt instrument capture the real sound and vibe of a range of classic drum machines? Alex Holmes prepares to program some beats… 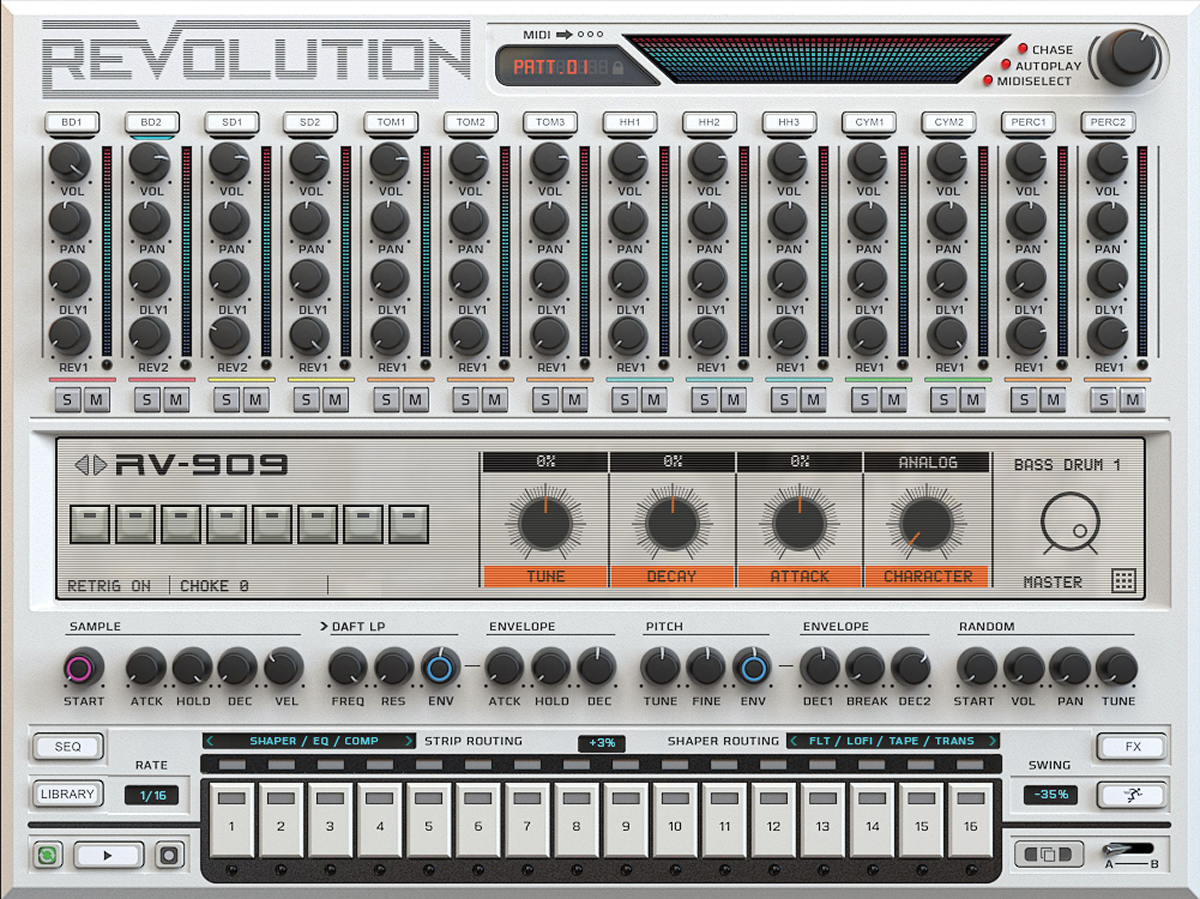 Over the last few years, Wave Alchemy has positioned itself as a premier source for drum-machine samples, with a care and attention to detail bordering on obsession. Whether it’s recording raw hits from a variety of units, or applying crunchy saturation through tape or other means, there have been a number of deeply sampled vintage-instrument releases.

Revolution is the natural progression of such a collection, and combines many of the previous drum-machine releases with all new libraries, and packages them in a high-tech new Kontakt interface.

You’ll need the latest version of Kontakt or the Kontakt Player to load either the drum or percussion instrument, and from there you can choose your drum machine of choice via a snapshot preset list.

There are 14 iconic machines to choose from in Revolution, including the TR-909, 808, 606, 707, CR-78, LinnDrum, Drumtraks, Drumulator, Oberheim DX and more, with over 41,000 one-shot samples helping to give a truly authentic sound. Wave Alchemy has captured every tone variation and nuance of the originals via high-quality outboard, with the analogue machines offering round-robin sampling to recreate the subtle differences between hits.

There’s quite a lot crammed into the interface, but it’s well designed and easy on the eye. That said, you may have to do a little scrolling if using Revolution on a laptop, although it’s not a major issue.

Alongside loading up an entire specific machine into the 14 drum voices (comprising two kicks, two snares, three toms, three hi-hats, two cymbals, and two percussion) you can also mix-and-match sounds, which is shown off to good effect in the hybrid and processed snapshot presets.

Switching between sounds in Revolution will dynamically remove and load only the necessary samples to help keep RAM usage to a minimum.

There’s a main mixer for volume, panning, and effects sends, which can be sent to one of two possible delays, and one of two possible reverbs, giving room for a bit of creative effect variation across the kit. Although the delays are the standard Kontakt affair, the reverb units feature a specially recorded collection of rooms, springs and digital reverb IRs that fit especially well with the 80s drum sounds.

Underneath the mixer section, you have up to four edit controls to sculpt the tone of the selected drum voice, although this varies between the chosen machine and instrument, with the more basic drum-machine sounds having fewer controls.

As a nice touch, the skeuomorphic graphics mimic the machines’ original front panels, which helps to identify the different sounds. Arguably the most important part here is the Character knob, which allows you to select whether the samples played are Analog (clean and round robin);

Tape 1 & Tape 2 (different levels of saturation); S1200 (using Kontakt emulation); Digital (with no round robin, giving more of a machine gun effect; SP1200 (recorded through the actual sampler), or Mastered (processed through a flattering outboard chain).

Again, which of these options is available varies depending on the chosen sound, but some of the saturated kicks in particular sound superb, and it’s nice to have the option of a genuine analogue-tape sound. It’s also an excellent way to quickly jump between sample sets, and to preview Wave Alchemy’s extensive sampling variations whilst a track or pattern is playing.

One thing we noticed here though, was that compressing the 909 kick brings up the floor noise from the machine. In many ways, this is a characteristic part of the original, but on WA’s previous Transistor Revolution instrument, the machine noise had its own separate volume control. To give complete control over the samples, you’ll also find dials for the sample start, filter and pitch, plus amp, filter and pitch envelopes, and a useful Random section that lets you humanise the sound by adding variations to the volume, pitch, pan and sample start.

The sounds of the original machines are all well and good, but if you want to go beyond their raw tones, then there’s an extensive FX section, which is displayed in place of the drum controls when you press the FX button. You can switch between Insert, Send and Master FX, with the Insert and Master offering the same processing options, albeit with a few minor differences and an output limiter on the Master, and the Sends featuring the aforementioned two delays, and two reverbs with custom IRs.

Here, you’ll find a sensitive, SSL-modelled EQ with four bands to help you shape your sound, and a compressor that can be set to modelled FET or VCA modes to give different flavours of compression.

There’s also a section called Shapers that features a filter, a bitcrusher, tape saturation and a transient controller, each with two controls, making editing a simple process.

Anyone who has used Kontakt or any Kontakt instruments in the past will know what to expect, and the built-in effects are of a high quality. As the order of the FX chain can make such a big difference to the end result of the sound, it’s good to see drop-down menus that enable you to rearrange the order of the four Shaper FX, and also the overall order of the Shaper, EQ and Compressor sections.

It’s a shame that you can’t route the reverb and delay Send FX through the Master out, but to be fair, this is a limitation within Kontakt and not Wave Alchemy’s fault. You do, however, have the option of routing any of the voices to 16 separate outputs for external processing in your DAW, and there are templates for Logic, Ableton, and Maschine that pre-map the instrument to work with multi-outs.

The final part of the instrument is the Sequencer section, which can be sync’d to play when your DAW plays and also accepts MIDI, so you can play your patterns in live. At the bottom of the main page, you have a classic button-based step sequencer, with two levels of velocity and global accents, plus Rate and Swing controls. At the time of writing, the Rate options are limited to 1/4, 1/8, 1/16 and 1/32, but there’s an update on the way that adds in 1/6, 1/12 and 1/24 timings.

If you want more extensive sequencing options you can switch to the Sequencer page, which displays a large 32-step grid showing all 14 drum voices, and offers a higher resolution for the velocity of each hit and a Slop control to add timing variations. There are some neat functions here that use modifier keys to cycle through preset patterns, or copy, delete and move your sequences. You can also save and load your patterns in the Library, and there’s a massive number of grooves, including new beats and older patterns taken from legacy products.

If you want to edit in a different way, you can easily drag-and-drop the MIDI to the timeline of your DAW, and to aid in arrangement and performance, you can trigger up to 12 patterns via MIDI key switches. Although the sequencer is an effective way to write your overall beats, it’s a shame there aren’t some extra lanes to control things like cutoff, pitch, decay and maybe the FX sends, as this would enable more creativity with your sequences, and mean you could sequence melodic lines using the excellent kick and percussion sounds.

Finally, we should really mention the NKS support, as WA has done a superb job at mapping sequencer parameters to the keyboard, and using the Komplete Kontrol light guides to offer visual feedback. There are also Stutter and Reverse keys that can add an extra layer to your performances and jams.

There’s certainly no shortage of sampled drum instruments. Samplephonics has 808 and 909 Kontakt instruments (£49 each); Samples From Mars offers tape-saturated 808, 909, Simmons and Drumtrax samples in a bundle ($69), or alternatively, d16 has 606, 808 and 909 VSTs (€99 each). However, none are as extensively sampled as Revolution.

Whether you’re looking to work with clean sounds from the originals, or to create heavily processed beats, there are plenty of options here. The excellent GUI is well thought out, and with the addition of all the modifier keys, really pushes what Kontakt is capable of. You may wonder if you need more drum-machine samples, but the beauty here lies in how well the analogue depth of the machines has been captured, and the variety on offer.

It’s a great place to start for adding subtle life and variation to repetitive techno grooves, and little variations in the kicks in particular can make your beats more pleasurable to listen to on a subconscious level. 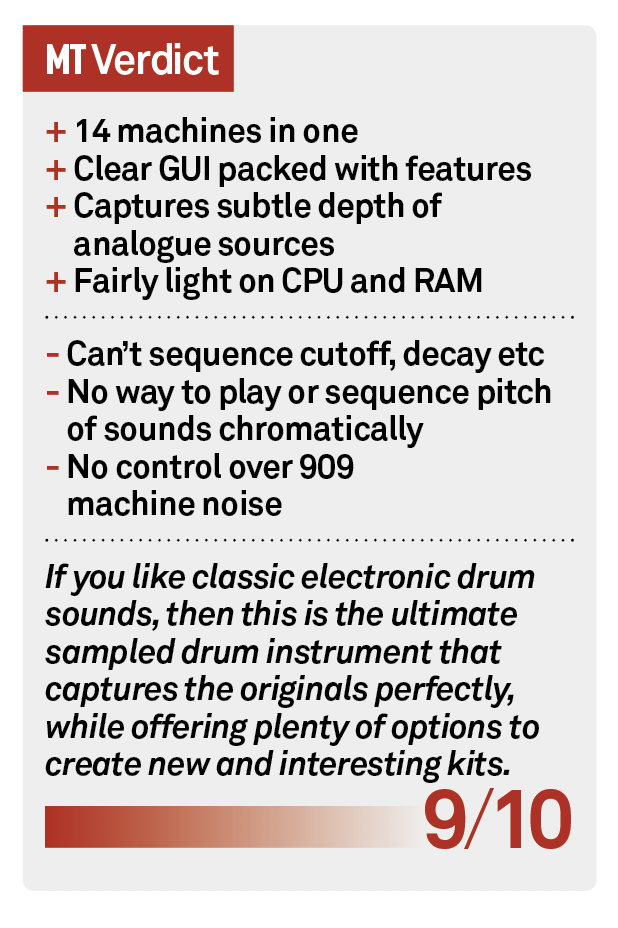