That retro space-hopper glow returns to this website once more as Warm Audio unveils its new Beast. John Pickford seeks to tame it. Details Price £549 Contact Nova Distribution – 020 3589 2530 Web www.warmaudio.com Amazon.co.uk Widgets We were quite taken with Warm Audio’s first mic preamp, the WA12, praising it not only for its funky-vibe […] 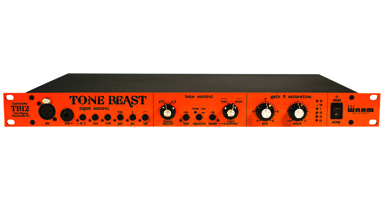 That retro space-hopper glow returns to this website once more as Warm Audio unveils its new Beast. John Pickford seeks to tame it.

We were quite taken with Warm Audio’s first mic preamp, the WA12, praising it not only for its funky-vibe character but also its tone-switching feature, which adds a rather nice vintage flavour to its sound. Now the Texas-based company has expanded on that original design to produce the TB12 Tone Beast, a 1U, 19-inch rackmount unit that offers a vast array of tonal options, ranging from clean and open to thick and meaty.

What’s more, the Gain and Output controls can be set up to introduce varying degrees of saturation, enabling the user to achieve that hot and crunchy overdriven sound often heard on classic recordings from analogue’s glory days of the 60s and 70s. And like the earlier unit, the Tone Beast is finished in a funky space-hopper orange that was all the rage in 1974.

Subtle Transformations
What sets the Tone Beast apart from basic mic preamps is that apart from the standard features you would expect to find – phantom power, 20dB pad, phase-invert and high-pass-filter – it also offers a number of switches that send audio signals through a choice of op-amp, capacitor, impedance and output transformers.

The discrete op-amps on offer are clones of the much-loved 1731-style op-amp, revered for its big, warm and distinctly vintage character, and the more modern 918 type, which is less characterful but offers a more neutral, open window to the sound of your microphones. If that’s not enough, the op-amps are socketed so that users can remove and replace them with op-amps of their choice without the need for soldering.

The push-button Tone switch determines the input impedance of the Tone Beast: disengaged it’s 600 ohms, while switched-in is 150 ohms. Selecting 150 ohms increases the gain of the unit by +6dB to a maximum of +71dB, which we found particularly useful when using our Coles 4038 ribbon mics. While the 600-ohm setting is standard for dynamic and condenser mics, it’s worth comparing the two options on all of your sources, remembering that the unit’s line and Hi-Z DI inputs are also affected by the change in impedance.

The Capacitor switch offers ‘clean’ and ‘vintage’ flavours by switching two capacitors in the circuit from tantalum to electrolytic, and while the company admits that this feature is quite subtle, we struggled to hear a change in several of our tests. Much more obvious was the tonal characteristics of the two selectable output transformers. Both are high-quality CineMag devices that feature either a steel core or a bespoke 50% nickel core; these can be switched out of circuit for a more transparent sound, although a -8dB reduction in signal level occurs with the transformers bypassed.

Testing Times
During testing we used a wide range of microphones, ranging from our inexpensive Shure SM57 right through to our highly prized valve Neumann U67, as well as DI’ed bass guitar and some vintage keyboards. As you might imagine, the number of tonal options is extensive and users will discover their preferred combination of op-amp and other settings over time. However, to give an overview, we found that using a vintage-style setup of 1731 op-amp with the steel-core output transformer, the sound was up-front and had plenty of presence, sounding great on drum overheads and electric guitars.

Selecting the 918 op-amp produced a fuller, more rounded sound, while using the nickel-core transformer with the 918 offered the cleanest tone, eliminating a certain amount of grain that the other combinations gave while remaining full-bodied, open and even-handed across the entire frequency spectrum. This was the preferred setting for a lead vocal and also sounded very nice when using an AKG C414 to record an acoustic guitar. We also tried the Tone Beast with the transformers bypassed, but felt the unit lost some of its mojo, even though the sound was quite pure and natural.

The quality of sound the Tone Beast provides in all configurations is excellent, and it’s certainly capable of holding its own even when compared to other preamps costing several times the asking price. The musical saturation the unit provides when driven hard is quite delicious, and while the preamp may not be the last word in high-end transparency, it does have bags of character, which will, no doubt, win it many friends. 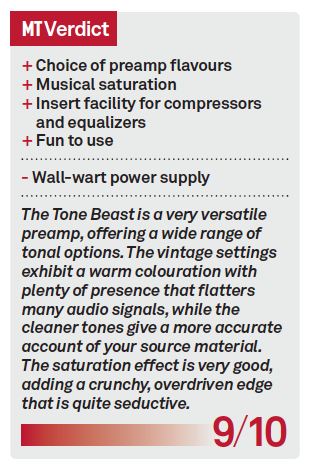