Hot on the heels of the Freebird comes yet more all-valve gear from the Thermionic stable. John Pickford hears it sing. 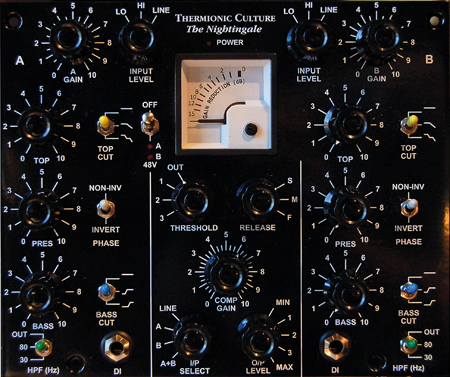 Back in Issue 99 we reviewed Thermionic Culture’s Freebird three-channel EQ, the first of the company’s 4U, half-rack units designed to form the basis of an all-valve modular system. Now we have the second of these designs in The Nightingale, which comprises two microphone preamps with EQ alongside a mono vari-mu compressor. Three-channel units are a rarity in professional audio circles, although clearly dear to designer Vic Keary’s heart, as it’s claimed on the company’s website that the number three is the most powerful number in the universe! We’re not sure about that; however, we are reminded of the Latin phrase omne trium perfectum – everything that comes in threes is perfect.

Over the past 12 years, Thermionic Culture has produced a number of outstanding pure-valve outboard units, such as its Phoenix range of compressors (see the review of the Mastering Plus in Issue 104), and Early Bird mic preamps. The company even produce a world-class distortion unit called the Culture Vulture, the latest version of which, we have been assured, will be available within the next couple of months (watch this space). We are familiar with many of Thermionic’s products, and regularly use the Early Bird 2.2 mic preamp with its complementary Pullet passive equalizer in our main signal chain, more often than not routed through our beloved original Phoenix compressor.

Although the two mic preamps and compressor can be used individually, The Nightingale has been designed so that two independent signals may be summed together internally and processed through the compressor. This will no doubt be a major selling point for the unit, especially among engineers who frequently use two mics on a single source, such as top and bottom of a snare drum, for example. The unit was originally conceived with live use in mind, whereby two vocal mics could be processed with individual EQ and then sent through the compressor, although, as we shall see, the various ways in which it can be employed also makes it a very powerful, versatile studio tool.

The mic preamps feature transformer-balanced inputs with transformer-less unbalanced outputs, using a single ECC832 valve in each channel. On the front panel, a three-way Input Level switch allows for the selection of mic Lo (600 ohms), mic Hi (1,200 ohms) or Line inputs. A stepped rotary pot controls the input gain, with up to +34dB available at the Lo setting, +21dB at the Hi setting, and +5dB for the Line input. The EQ section features individual pots for Top, Presence (mid-lift) and Bass. These are boosting controls offering up to 11dB boost of presence and bass, and 12dB of top boost.

Both Top and Bass boosts feature a gentle varislope-type of EQ curve, with the Top peaking at 9.5kHz and the Bass peaking at 40Hz at full boost. The Presence lift provides a broad midrange boost peaking at 2.8kHz. Switches are provided for Top and Bass Cut, with the Top Cut giving the option of a low-pass filter attenuating 6dB at 8kHz, or a shelving cut of 8dB at 8kHz. The Bass Cut offers two choices of shelving filter, providing either 3dB cut at 200Hz down to 7dB at 80Hz, or 3dB cut at 800Hz down to 6dB at 200Hz. This Bass Cut switch can be used in conjunction with the Bass-lift control to reduce the low-mids while simultaneously boosting the bass frequencies. Further tailoring of the low end can be done by making use of the two-position high-pass-filter (HPF) switch, which gives 6dB of cut at either 30Hz or 80Hz. The remaining two toggle switches on the preamp section offer 48V phantom power and phase-reverse respectively. A direct injection socket is also provided, enabling guitars, keyboards and so on to be plugged directly into the unit.

The compressor section is based on the much-loved Phoenix, a soft-knee, variable-mu design. Below the VU meter is a four-position Threshold switch that determines the signal level at which compression begins. In the first (Out) position, no compression takes place, while settings 1, 2 and 3 give increasing amounts of gain-reduction. The Comp Gain pot provides up to 28dB of input gain to the compressor and is indented for easy recall of settings.

When the mic preamp is sent to the compressor via the I/P Select switch, the compressor will add gain to the preamp, providing up to 60dB of gain, more than enough for any situation. The response time of the compressor is adjustable by making use of the three-position Release control, which offers release times of 60ms (F), 150ms (M) and 500ms (S). The attack time is not user-controllable and is fixed at 60ms, which is the equivalent of setting 4 on The Phoenix.

The aforementioned I/P Select control is at the heart of The Nightingale, offering a comprehensive range of signal-routing options. With the I/P Select set to position A, the input to the compressor is taken directly from the output of mic preamp A. The preamp signal is also sent to the preamp A output XLR socket on the rear panel, enabling a combination of compressed and uncompressed signals to be used. As you might expect, I/P Select B operates the same way with mic-preamp B.

Now here’s where The Nightingale really comes into its own. With I/P Select set to A+B, an internally summed signal from the two preamps is sent to the compressor, and the desired mix can be achieved by adjusting either preamp’s input-gain setting. What’s more, of course, the direct preamp signals will also be sent to their respective XLR outputs. The compressor can also be used independently by feeding in a signal from the Line input, and in all configurations the output can be adjusted using the five-position O/P Level switch.

During the review period The Nightingale was used with various microphones, including a valve Neumann U67, FET Neumann U47, AKG C414 and Shure SM57. In all instances the unit sounded fabulous, with a wonderfully rich and clear character that only pure valve devices can deliver. We never felt that it would run out of steam in terms of available input gain, and even with large amounts of gain the noise floor remained vanishingly low.

Working with good valve equalization is always a joy and this was no exception, reminding us of the EQ section on our Early Bird mic preamp. The Top boost gave us sparkling high frequencies without ever sounding thin or brittle – as cheap desk EQ often does – and the Bass boost produced some beautifully rounded low-end tones, especially when used in conjunction with the filters to reduce some low-mid muddiness.

The real star of the EQ section, though, is the Presence boost, which sounds absolutely gorgeous on just about everything. During a tracking session we used the unit with a pair of AKG C414s to record a drum kit, using the Glyn Johns mic’ing technique, and found that by boosting both the Top and Presence by a good few dBs and activating the low-pass filter we could achieve a lovely stereo kit sound with great natural dynamics and enhanced tone. The only additional mic needed was on the kick drum – an AKG D112 going through the Early Bird with a touch of Phoenix compression.

Later on, a vocal was recorded with our U67 and again the Presence boost was employed to great effect, with a gentle squeeze from the compressor controlling dynamic peaks superbly. Using a two-mic setup on a bass amplifier (a Shure SM57 close to the speaker cone and a FET U47 about four feet away from the cabinet) we combined the signals by selecting The Nightingale’s unique A+B summing circuit. Experimenting with relative mic levels, EQ and compression settings, we were able to create some fabulous bass tones.

It took us no time at all to be seduced by the sonic charms of The Nightingale. Like all the Thermionic Culture units we’ve heard, it always sounds deliciously musical and correct. The mic preamps are clean and full-bodied, the EQ is pure and sweet, and the compressor can be used both transparently or as a punchy dynamic effects device. Its ability to process two signals through a single valve compressor without having to use a mixing console is, we believe, unique. Top marks again to Thermionic designer Vic Keary – The Nightingale is a first-rate product that feels great to use and sounds superb.

WALK ON BY
No preamp metering – good ears required!

The Nightingale is a brilliant addition to Thermionic Culture’s range of pure-valve equipment. Quality of sound is dazzling and the way it can be configured makes it versatile but still intuitive to use. Another winner from valve-design wizard Vic Keary.