Synchro Arts’ Revoice Pro 3 aims to be the de facto tool for timing and pitch correction. Mike Hillier checks his watch and aims for perfection… Price £379 Contact Synchro Arts 01372 811934 Web www.synchroarts.com The modern production workflow demands ever-more perfection when it comes to pitch and time, particularly when it comes to doubling […] 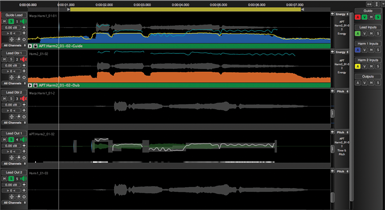 Synchro Arts’ Revoice Pro 3 aims to be the de facto tool for timing and pitch correction. Mike Hillier checks his watch and aims for perfection… 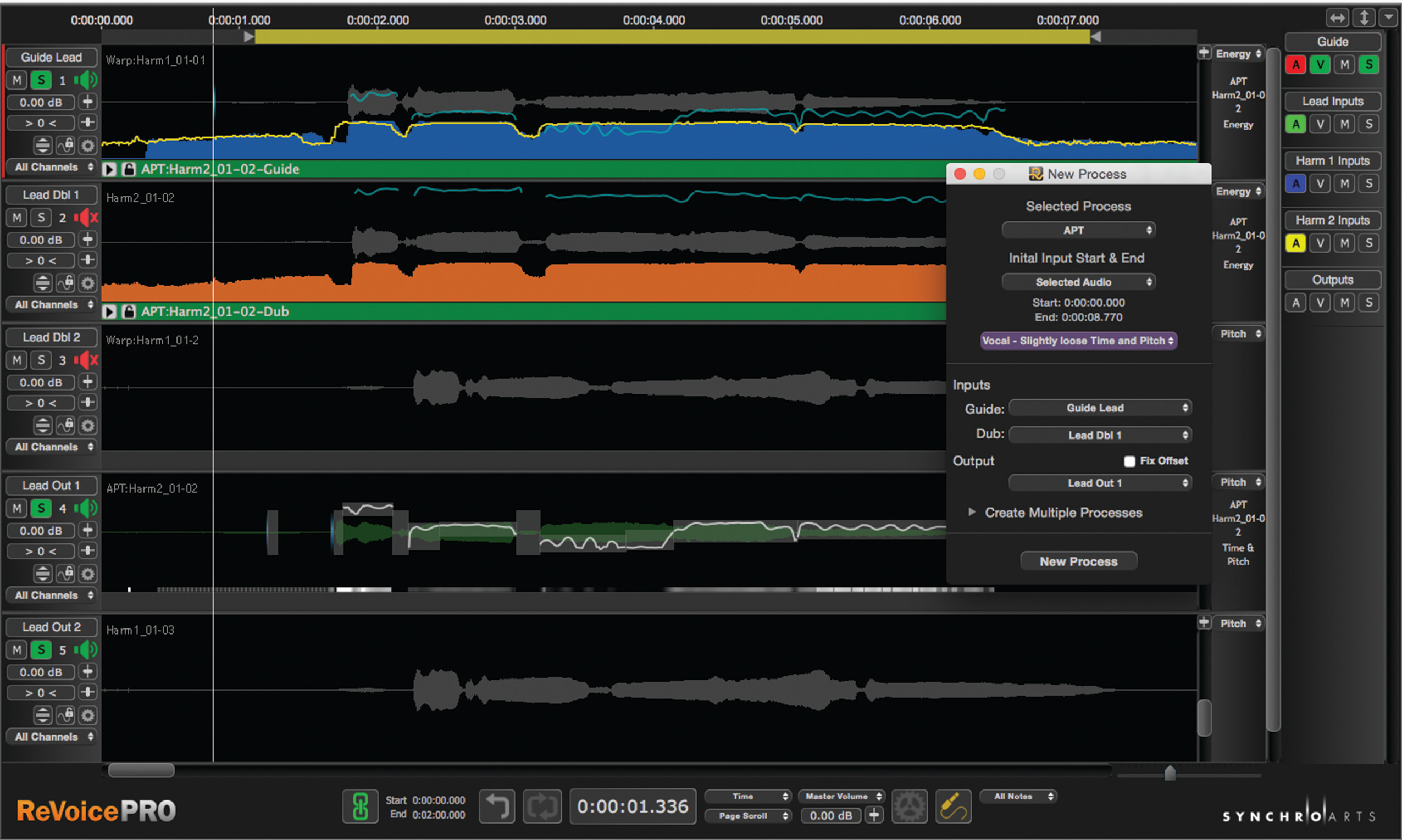 The modern production workflow demands ever-more perfection when it comes to pitch and time, particularly when it comes to doubling a vocal. Pitch correction has moved beyond a gimmick and is now a regular part of a production and when used well, can be completely ‘invisible’ to the end listener.

Similarly, warp tools can be used to correct timing, but getting two or more double-tracked parts to perfectly sync using manual warping can be time consuming at best. Enter Synchro Arts – its VocALign software enables engineers to quickly map the timing of one performance to another.

Initially developed for TV and film, where overdubbed dialogue (ADR) would commonly be recorded to replace guide tracks, VocALign also found its way into recording studios, enabling engineers to quickly create perfectly aligned backing vocal stacks from even the sloppiest of original performances.

Revoice Pro takes the time-alignment tools of VocALign further, with additional time-correction tools and throwing pitch correction, automatic doubling tools to the pot and even enabling you to copy the loudness profile or intonation from one track to another.

Dub be good to me

At the heart of Revoice Pro is the Audio Performance Transfer process, which analyses the pitch and timing of performance (known as the Guide) and can then apply this pitch-and-time map to another performance (known as the Dub). However, Revoice Pro goes beyond this, enabling you to create additional harmonies from the initial performance, as well as artificial doubles. From a single mono vocal performance, you could create a three-part harmony all inside your DAW and without needing to go back to the studio with the vocalist.

Using Revoice Pro, however, isn’t quite as simple as using a standard plug-in. And it’s worth spending some time watching the tutorial videos if you haven’t used Revoice before. Our review was carried out using Pro Tools, linked to the Revoice Pro app via an AAX AudioSuite plug-in. The plug-in lets you select regions of audio and send them instantly from Pro Tools to Revoice Pro and back again.

Multiple channels of audio can be sent across to different channels in Revoice Pro, while maintaining any time alignment they previously had in Pro Tools. This is a very convenient way of working and far faster than tools such as Auto-Tune or Melodyne, which listen and record the audio in real time.

Once the audio is in Revoice Pro, you can assign one channel as the Guide and perform actions to multiple other channels simultaneously, aligning timing or pitch. A mix we were working on had two backing tracks following the main lead vocal.

We would otherwise have aligned the timing of the tracks by hand, using the edit tools and Elastic Audio in Pro Tools, but copying them into Revoice Pro had the whole task done on both tracks in seconds, and the end result was not just tighter, but more natural sounding than we could have hoped to achieve after even 20 minutes of editing. 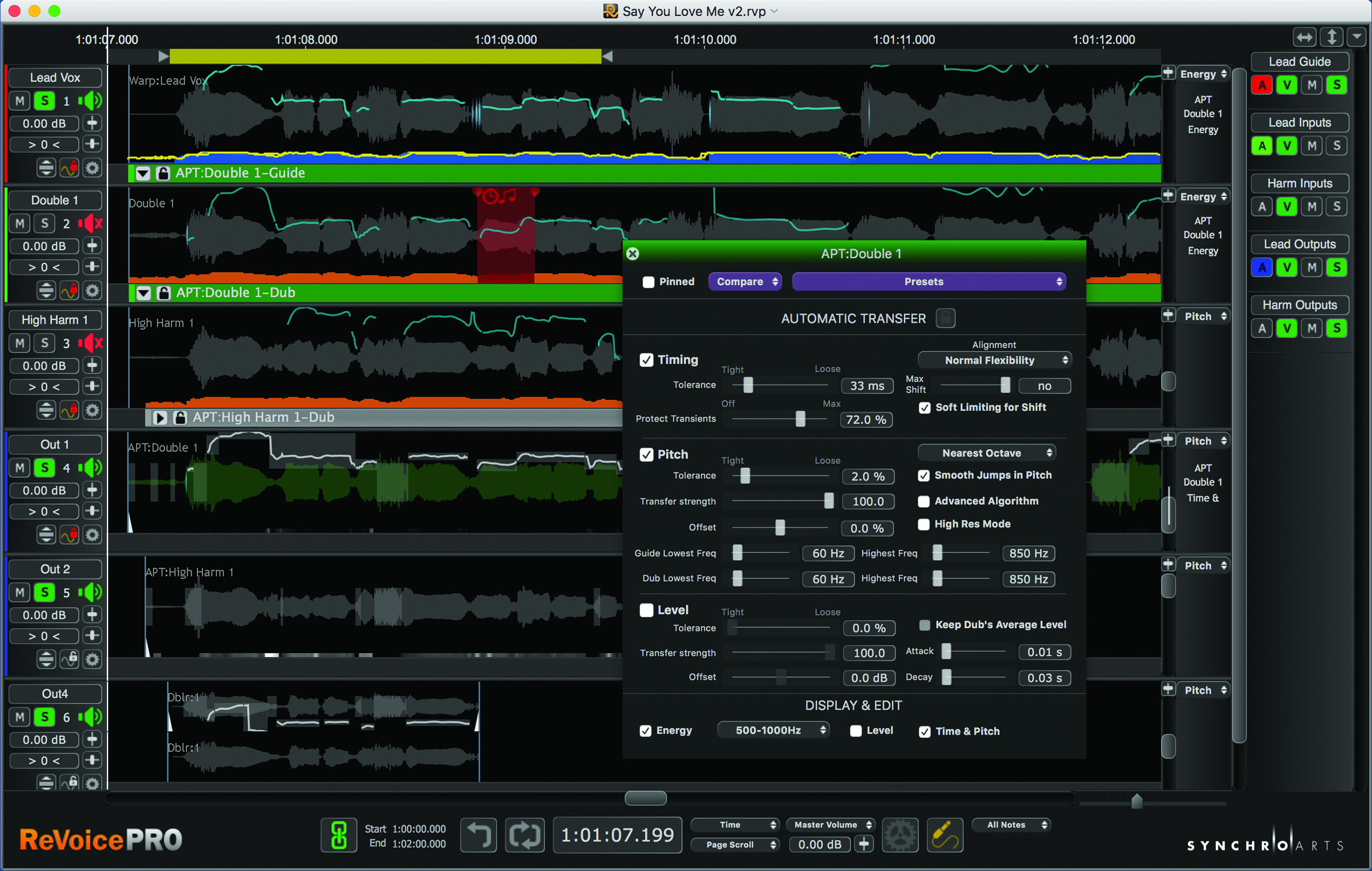 Furthermore, we were able to create a harmony of the backing vocal, by doubling one of the channels, and using the pitch tools to shift the notes up. Finding an intelligent harmony takes a little more time, but it’s easy enough to select either groups of notes or an individual note, as well as options for breaking up notes into smaller ones, to create almost any melody you could think of.

The end result of our experiment sounded at first a little overly forced and fake, with pitches leaping about: but again, Synchro Arts is one step ahead and has included an option to smooth transitions. So the note modulates slowly up or down, creating a far more natural, and less obviously pitch-corrected transition. This tool is excellent and gives mix engineers every tool they could possibly need, should a song need a new part long after the potential for re-recording it has passed.

Listen to some before and after examples here.

As well as the main Revoice Pro Link plug-in, which sends audio to and from the main Revoice application, dedicated plug-ins are included for quickly sync’ing (Revoice APT) and creating artificial doubles (Revoice Double).

These plug-ins still require Revoice Pro to be running in the background, but don’t require you to actually open the window for anything. Instead, they rely on whichever preset you have saved as the user preset for each task and for most tasks, will be all you need to use.

Revoice Pro is an essential tool for mix engineers, dubbing engineers, and anyone else who regularly works with multiple vocal stems. Not only can it align multiple different takes in pitch and in time, but it can also create custom harmonies from existing tracks, enabling you to craft the perfect mix even after the ‘talent’ has gone home. 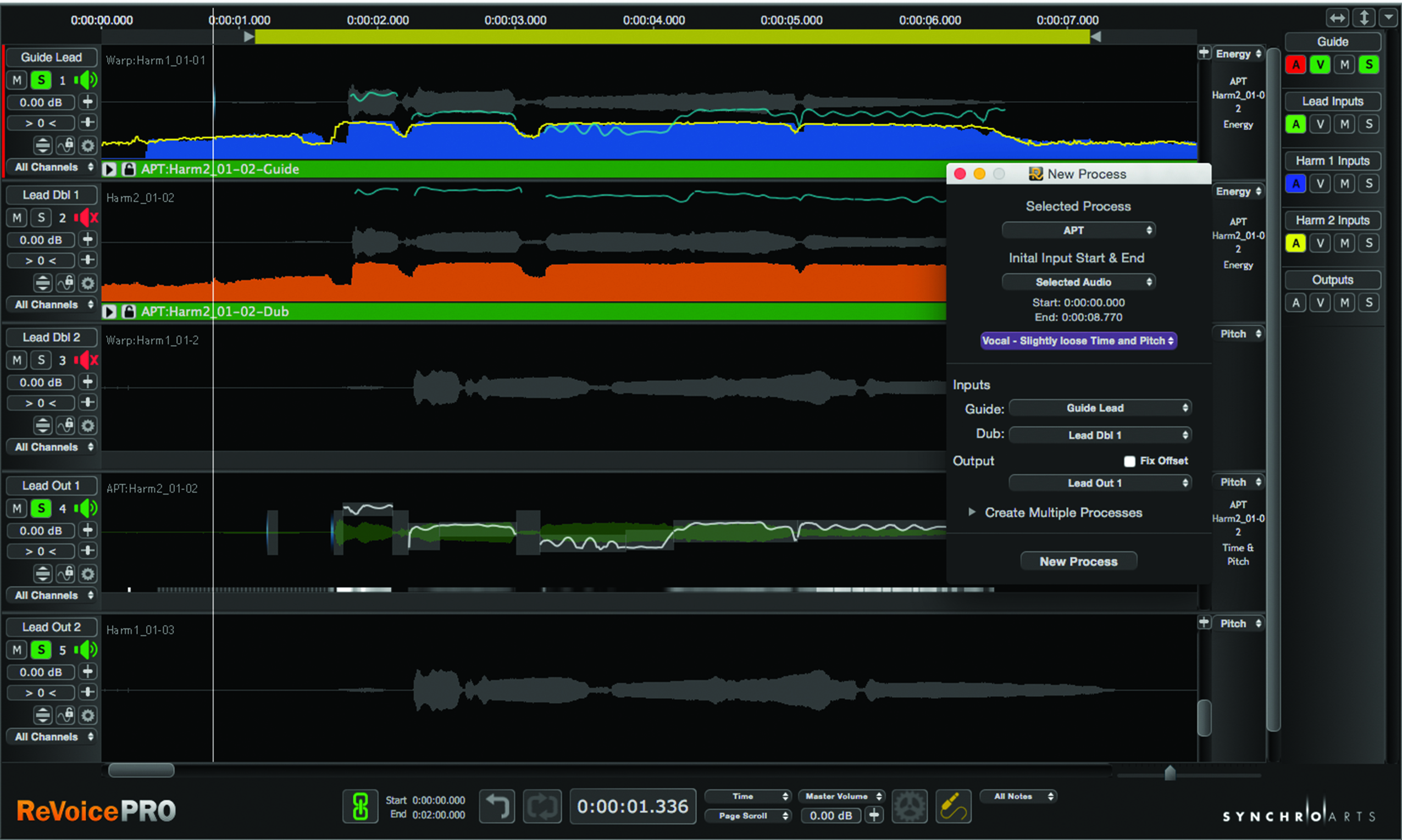 If your only requirement from Revoice Pro is the time-aligning features, then Synchro Arts also develops VocALign, which has the same alignment tools as Revoice Pro, but without the pitch- manipulation tools.

One area that we wouldn’t necessarily have even considered, but we have had some success with, is using Revoice Pro as a means to create a more natural virtual-instrument performance. We had a MIDI brass arrangement that was sounding a little straight and forced and no amount of swing was helping to introduce a human feel.

So we recorded a whistled performance of the same part. This had the human feel that we wanted, but obviously sounded nothing like a real brass arrangement. So we used it as a Guide Track in Revoice Pro, and used the virtual instrument, bounced down to an audio track as the Dub.

Applying the timing of the whistled part to the brass gave us exactly what we had wanted, leaving a natural-sounding brass arrangement. And once we were happy, we simply deleted the whistled track from the session.

Revoice Pro has the potential to be an absolute must-have studio tool – even if you already have and regularly use other tools for pitch and time manipulation, or for creating doubles. The speed with which you can tighten up a sloppy performance and create perfect doubles means Revoice will almost certainly be replacing these for some tasks. 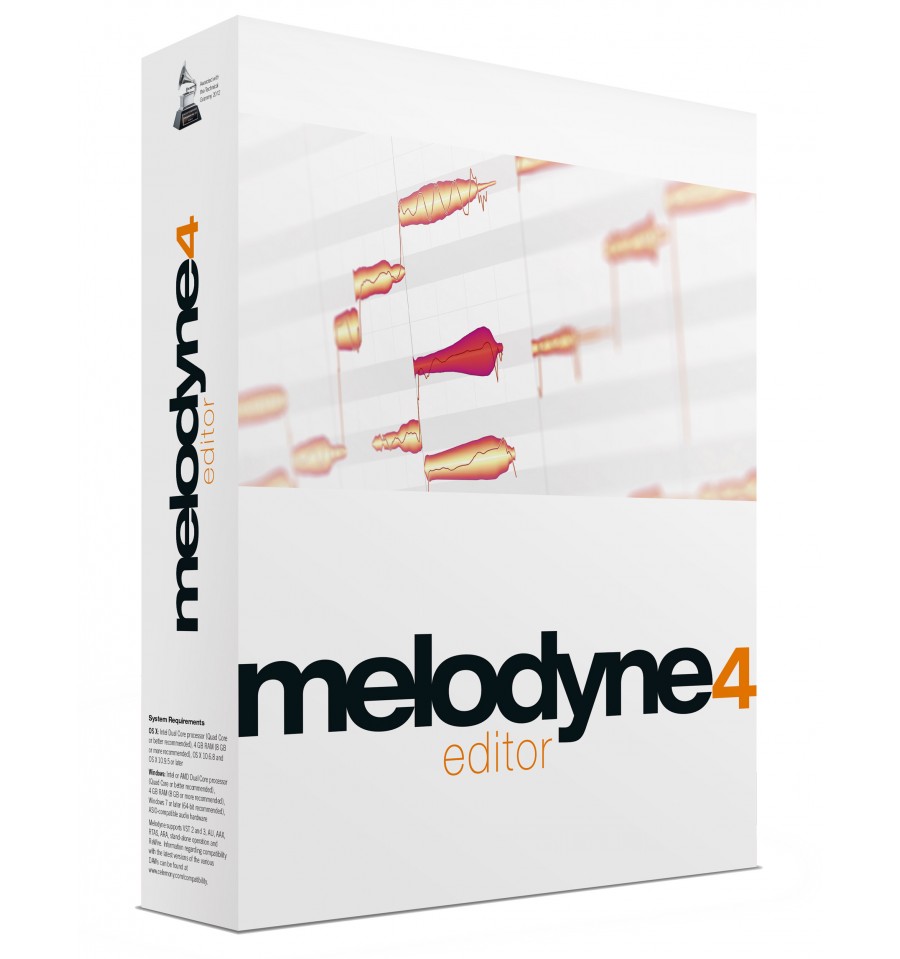 Also capable of pitch and time corrections, and of aligning parts by applying the timing of one performance to another. Its big advantage is polyphonic pitch correction. 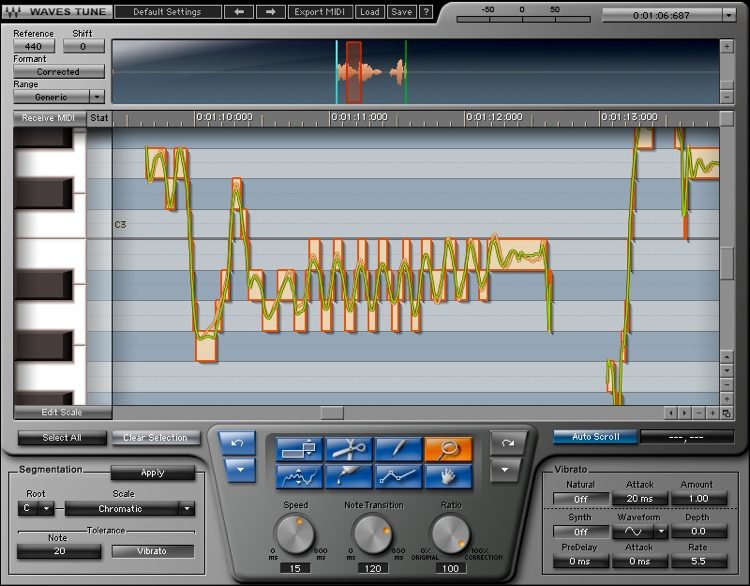 Waves pitch-correction plug-in features full ReWire support and formant correction, enabling you to do your pitch correction smoothly within your DAW. It features three timeline modes including bars/beats, minutes/seconds and samples.