The Steinberg AXR4T interface is an impressively featured, great-sounding and competitively priced high-resolution audio interface that integrates closely with Cubase. 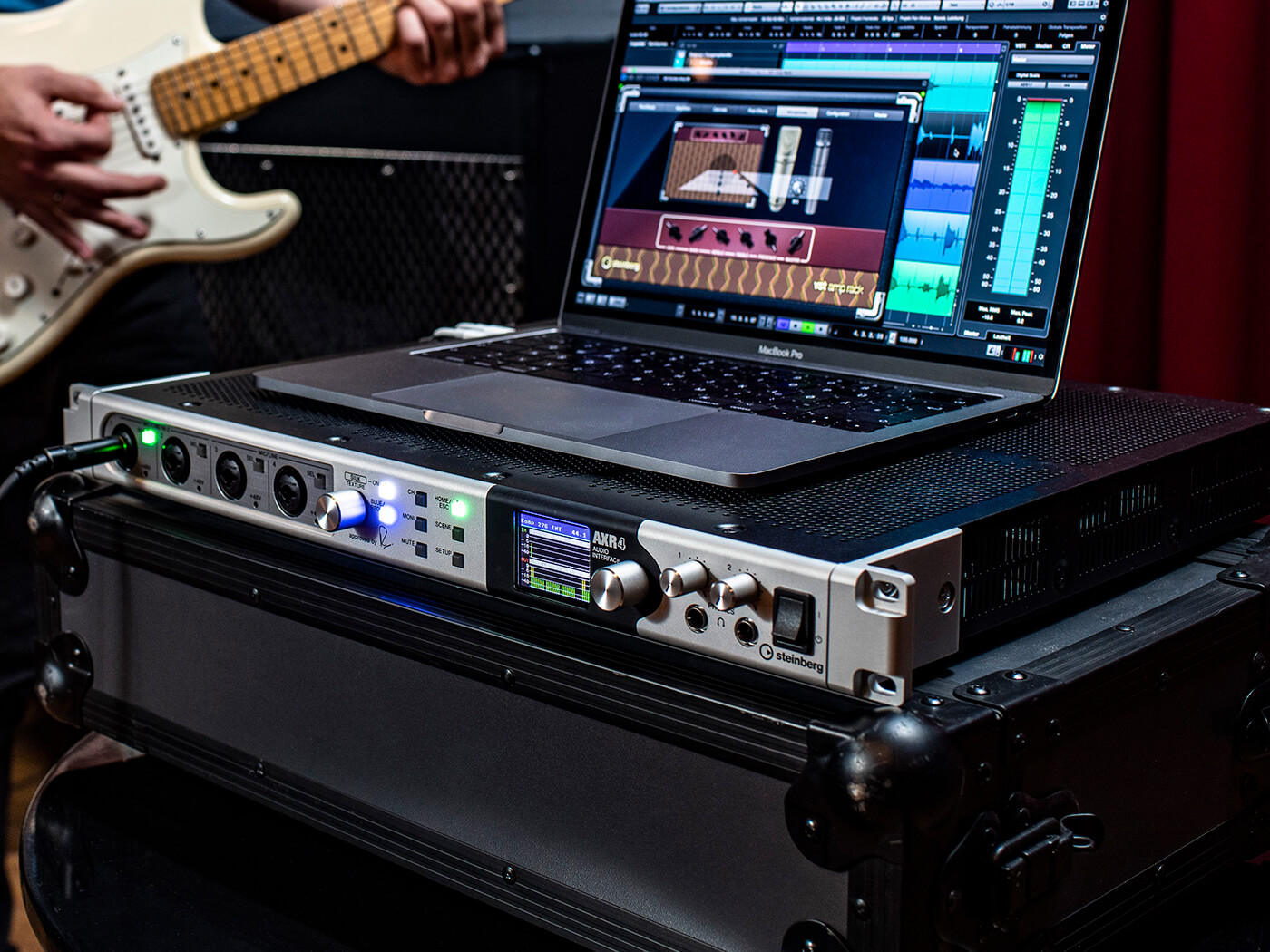 When Digidesign first released Pro Tools, the computers of the time lacked the capability to perform the processor-intensive tasks of mixing and effects processing, so the system included dedicated DSP acceleration cards that took these tasks away from the host computer. Once computing power increased sufficiently, many DAWs – including certain flavours of Pro Tools – were able to bring these processing functions into the host computer, removing the need for expensive dedicated DSP.

But in recent years, things have been going the other way again, with a growing number of DAW-agnostic DSP-infused audio interfaces in the mid-to-upper end of the market. Now Steinberg has joined the fray with the AXR4T, a handsome-looking, 1U rack-mounting audio interface, developed in partnership with Yamaha.

The AXR4T offers 12 analogue inputs. Two are mic/line/Hi-Z inputs, two are mic/lines, and the remainder are standard line-level inputs (all lines are balanced). The front-mounted mic channels are of the XLR-jack combo variety and feed to Yamaha AXR hybrid preamps. These feature a clean, natural-sounding analogue stage and incorporate Rupert Neve Designs SILK modelling in the digital domain. This recreates the warming compression and saturation of classic Neve preamps; Red mode adds sparkle and definition in the mid-to-high frequency band, whereas Blue mode adds solidity and body to the lower frequencies.

The remaining eight analogue inputs are mounted on the rear panel, along with the eight analogue outputs, MIDI I/O, Word Clock I/O with SSPLL virtual jitter-reduction technology, and digital I/O via optical S/PDIF, ADAT and multi-channel AES/EBU. The interface supports a maximum of 16 digital I/O channels, but the actual number available depends upon the unit’s sample rate and the connection format being used. 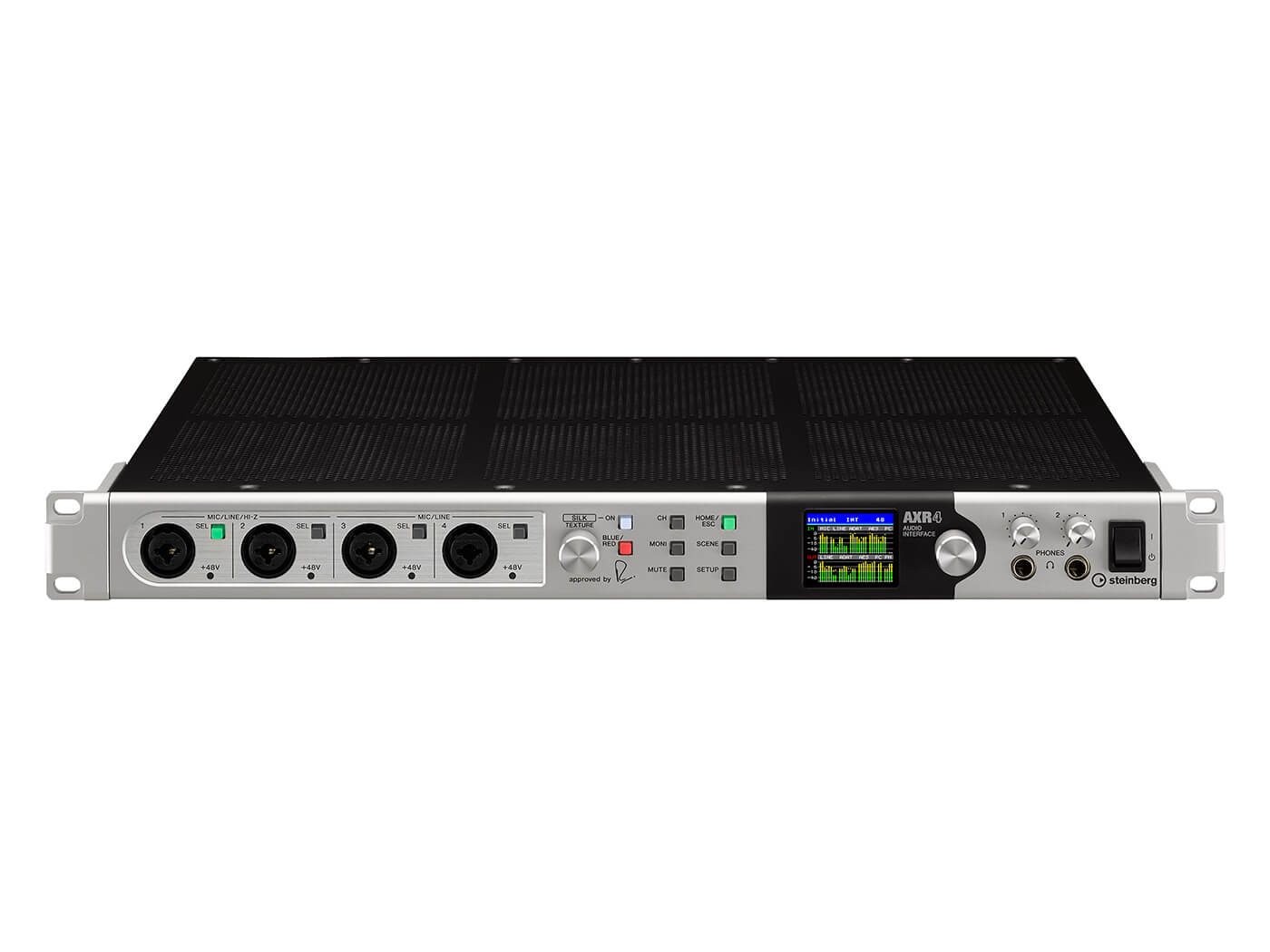 There’s a pair of headphone output jacks on the front panel, each with its own volume control, and taking centre stage here is a high-resolution colour LCD display. This shows I/O level metering, and provides access to every parameter and setting of the interface, thereby allowing it to function as a standalone mixer of sorts; most users will of course plan to connect it to a computer, though, where the ‘dspMixFx AXR’ mixer and control-panel software also provides GUI-driven access to these settings. Incidentally, Cubase gives direct access to the hardware mixer via a panel extension, making it feel closely integrated with the DAW.

For onboard effects processing, the AXR4T uses Yamaha’s DSPX chip, which includes the company’s VCM (Virtual Circuit Modelling) technology. The unit ships with four plug-ins: Vintage Classics EQ601, Vintage Classics Compressor 276, Sweet Spot Morphing Channel Strip (a combination of parametric EQ and compressor), and REV-X reverb. These can be added as plug-ins within your DAW, with the processing being performed by the AXR4T; alternatively, any pairing of the Compressor, EQ and Morphing Channel Strip can be inserted into the AXR4T’s mixer’s input channels and each channel also has a send that feeds to a single instance of the REV-X reverb. When running in the AXR4T mixer in this way, the inserted effects provide latency-free processing to the direct monitoring signal, and the processed signal can be passed to your DAW for recording, too.

The interface connects to the host computer via Thunderbolt 2 and has an additional Thunderbolt port, so that you can daisy-chain other Thunderbolt devices, including up to two more AXR4Ts. Unfortunately, the unit doesn’t ship with a Thunderbolt cable, so that’s at least an extra £30 that you will need to spend. Also, Thunderbolt is currently at version 3, which means you’ll need a £50-plus converter to hook up an AXR4T to an up-to-date computer.

Now to the most headline-grabbing aspect of the AXR4T: its AD/DA converters support sample rates of up-to 384kHz and sample depths up to 32-bit. Read those numbers again: 384kHz! 32-bit! It certainly looks impressive on paper, and it stands to reason that bigger numbers mean better audio quality, right? Well, yes, but it’s not as clear-cut as you may think…

A 384kHz sample rate allows accurate capture of frequencies up to 192kHz, but even the most sensitive human ear can’t hear anything much above 22kHz. It is true that higher frequencies can have a detectable impact on lower, audible, frequencies, but whether frequencies as high as 192kHz cause an audible impact is debatable. Also, the 32-bit sample depth allows a theoretical maximum dynamic range of 192dB, 48dB more than 24-bit, but full volume is still full volume and so all that’s really being achieved is to capture the analogue noise floor in greater detail. 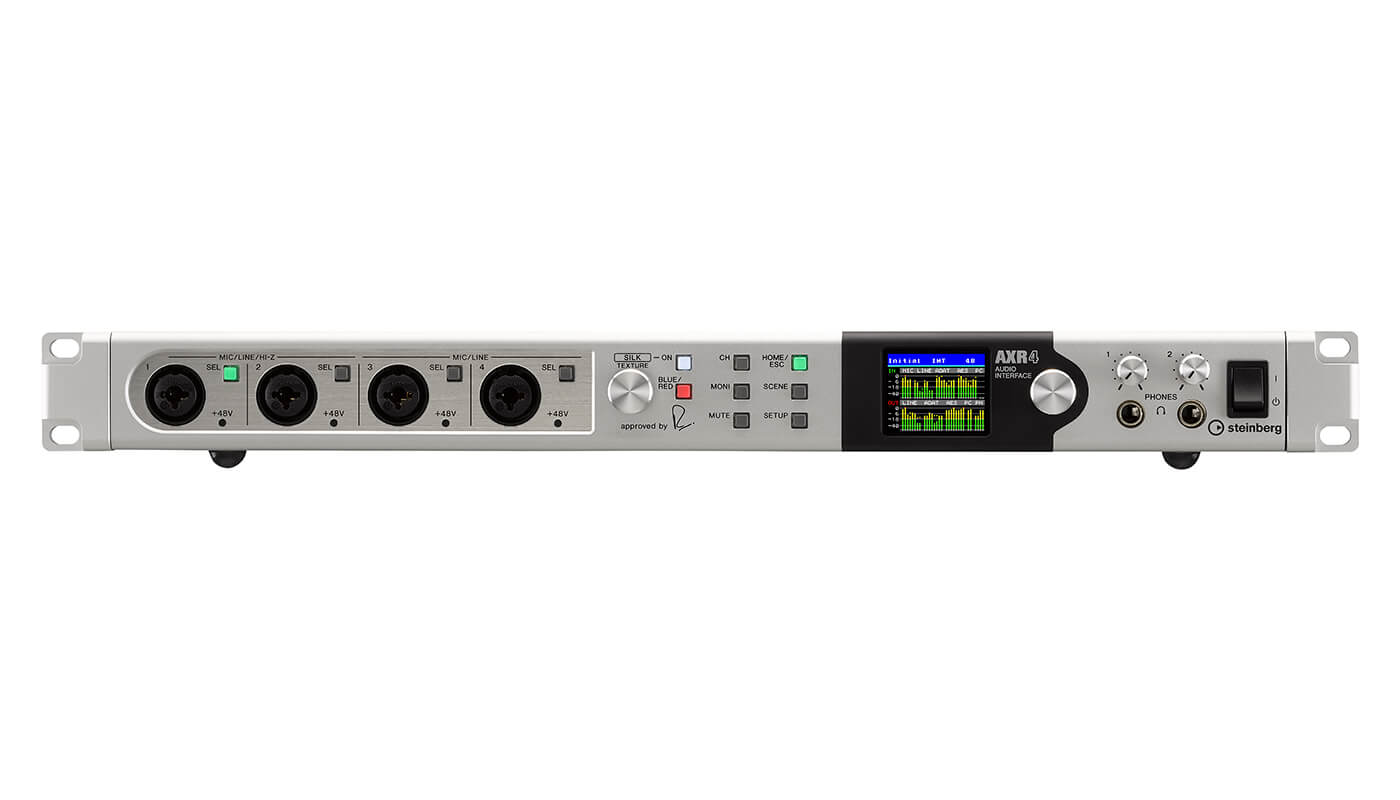 If you are recording something as dynamic as a symphony orchestra using the best mics and monitoring that money can buy and if you have incredibly sensitive hearing, then you may just be able to discern a difference between 192kHz/24-bit and 384kHz/32-bit converters, but I have to confess that I can’t hear any difference at all. What I do notice, however, is that when running in this maxed-out mode, digital I/O is disabled and the onboard effect processing and VCM SILK emulation are unavailable.

My biggest niggle with the AXR4T is the omission of a Thunderbolt cable and converter, but once over that little hump it’s all good. The Neve SILK preamp modelling allows a lot of analogue character to be dialled-in to the otherwise transparent mic preamps, and the VCM plugins are well chosen to provide flexible, console-like channel processing; being able to apply these effects within the interface, latency free, and feed them back to performers is of great benefit, too. The choice of processors on offer is limited, but they are very good at their respective jobs and Steinberg is investigating whether to make more available in the future.

And call me old-school, but I like the inclusion of MIDI I/O, something that’s a glaring omission with some other interfaces in this class. As a Cubase user, I also found the direct access to the hardware mixer to be handy. 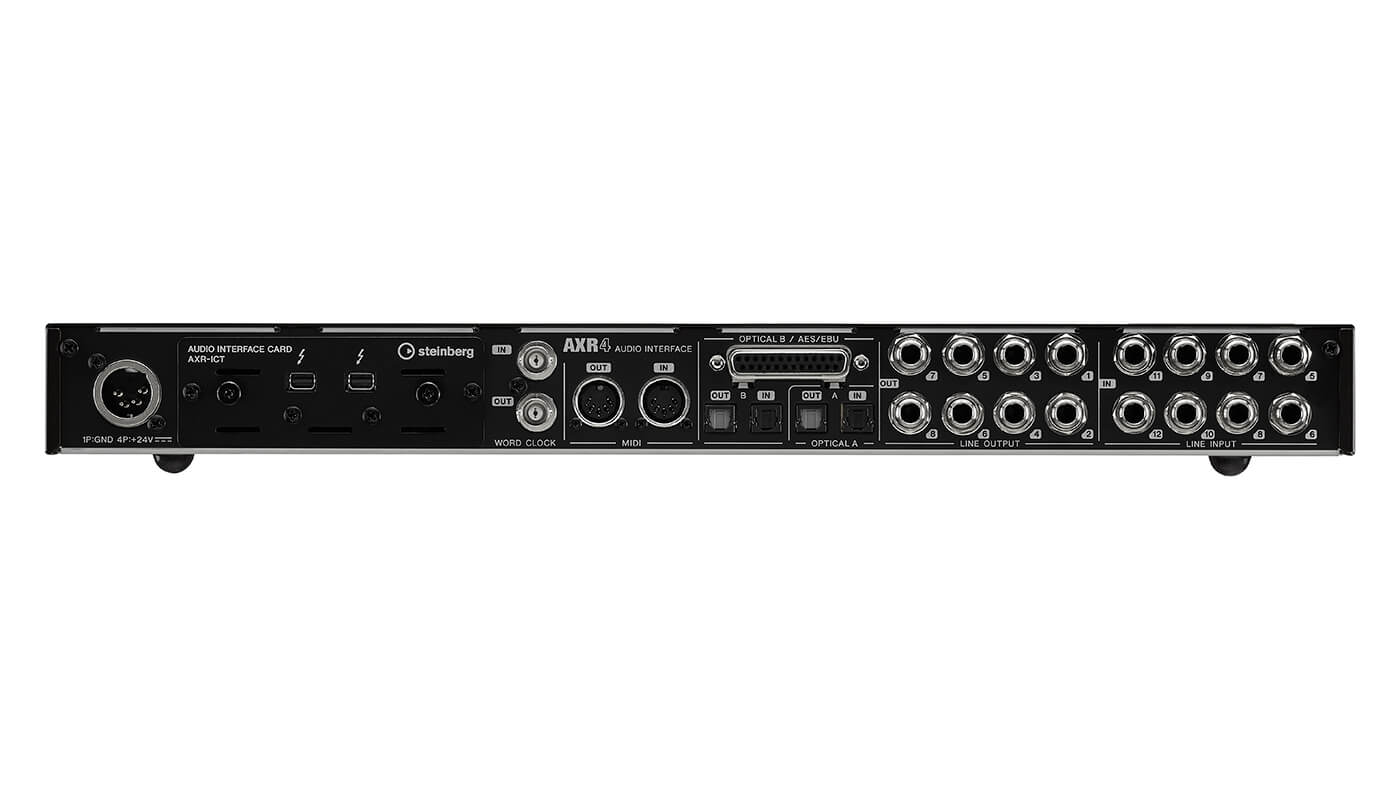 AXR4T’s extreme 384kHz/32-bit AD/DA conversion certainly grabs the attention and may be desirable in some very specific circumstances, but it disables useful features for little discernible benefit, so I doubt many users will crank things up beyond the more conventional 192kHz/24-bit digital format. That said, price-wise, Steinberg isn’t charging a premium for such impressive specifications, and it would be reassuring to know such a capability was available if ever you needed it.

All in all, then, the AXR4T is an impressively featured, great-sounding and competitively priced audio interface that will not disappoint.

The AXR4T’s top-level creds are mightily impressive and it may seem self-evident that 32-bit/384kHz convertors will sound better than the 24-bit/192kHz format that is the current high-end benchmark. Certainly, the AXR4T captures and renders sound with exquisite accuracy, but the rest of your studio – mics, cabling, monitors and so on – needs to be of a similarly ultra-high specification if you are to have any chance of noticing any audible benefits from such extreme digital specs. 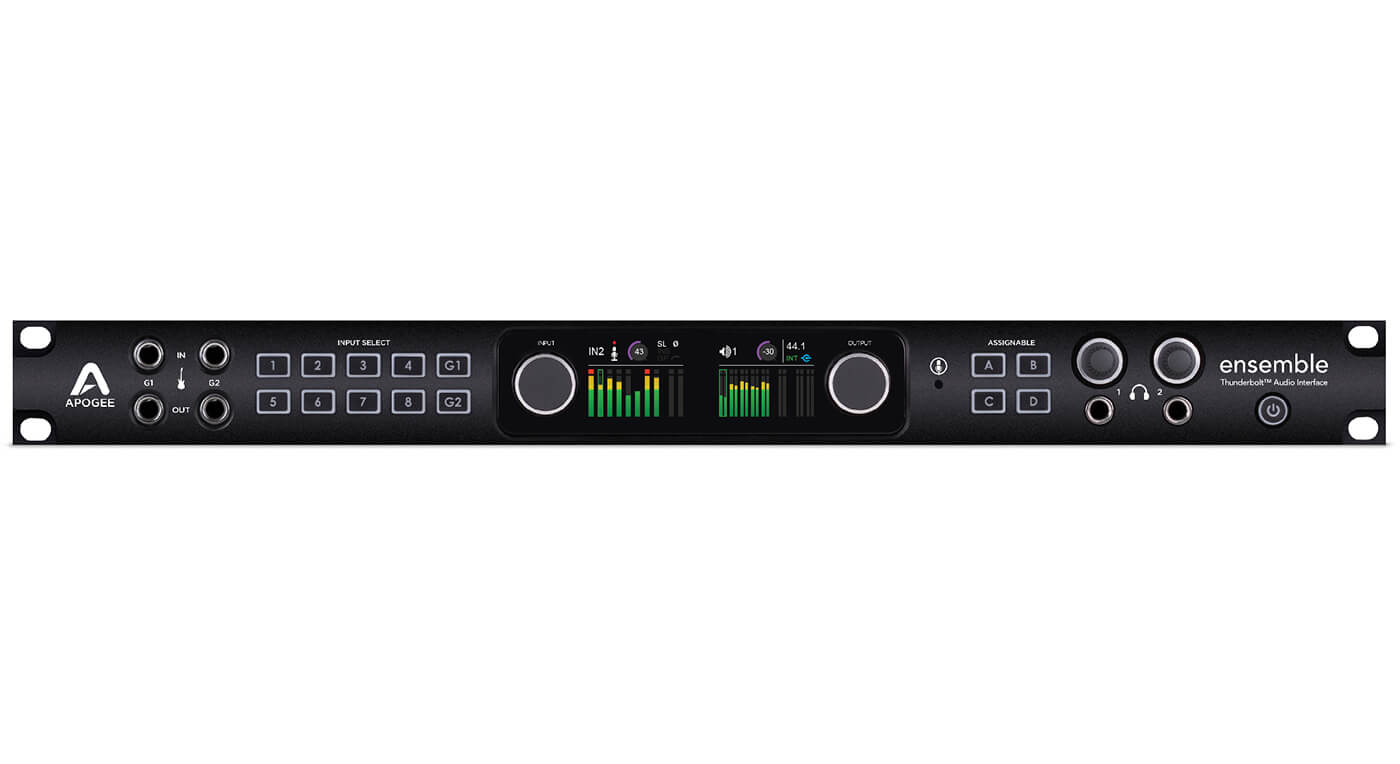 Apogee’s reputation is built on the quality of its AD/DA conversion technology and this expertise is at the heart of its Ensemble audio interface (although this maxes out at ‘only’ 24-bit/192kHz). The interface has onboard processing capabilities, too, providing DSP support to Apogee’s FXRack plug-in suite.

Universal Audio has built a formidable reputation for its audio interfaces, both for the quality of the audio I/O, and for its onboard DSP processing capabilities with extensive plug-in library. The X8 provides up-to 24-bit/192kHz conversion to its eight channels of analogue I/O.