High-quality microphones are getting smaller by the year, and the options for capturing true stereo recordings of instruments are myriad. But is Rode’s all-new TF-5 the best solution? 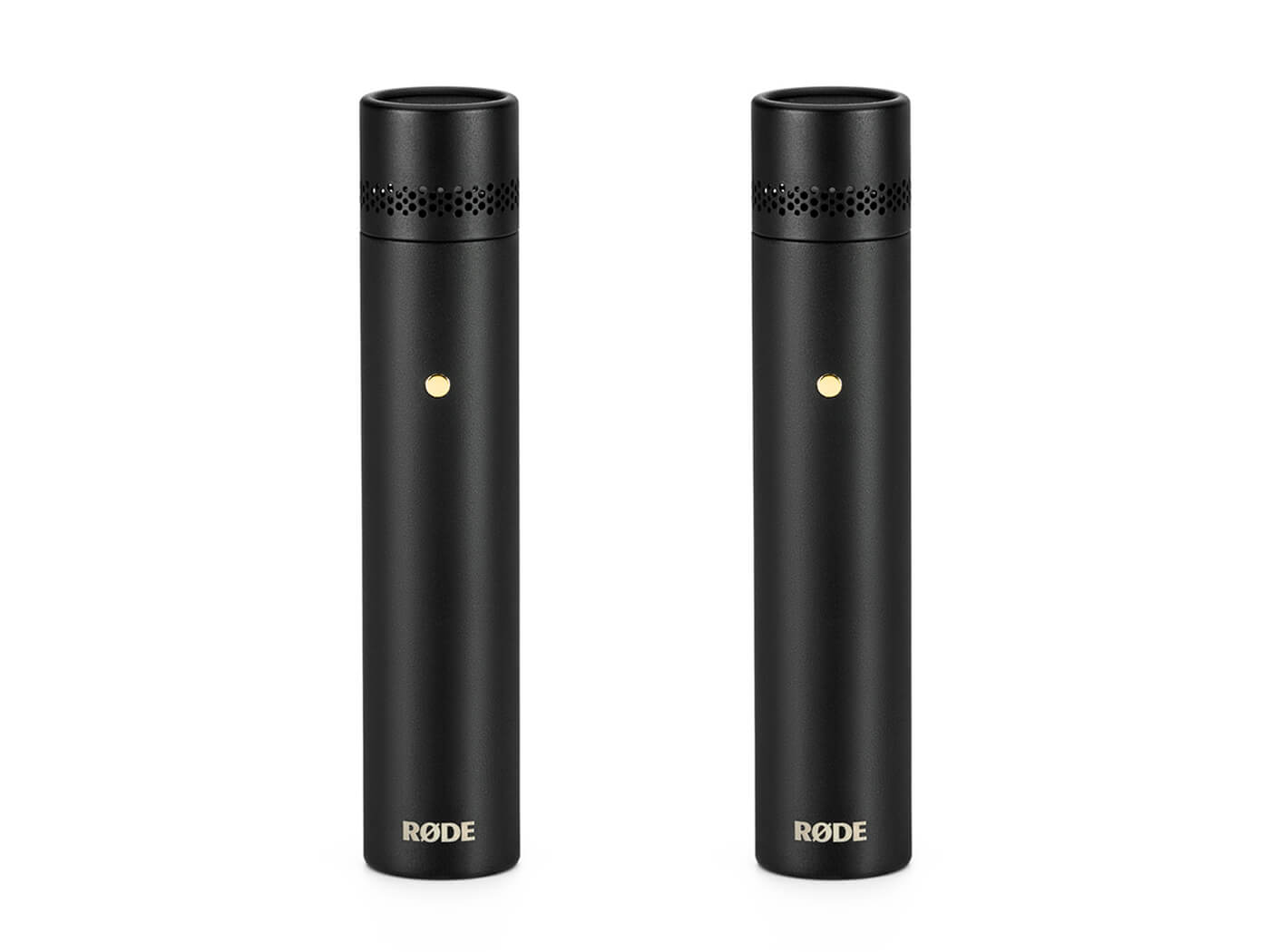 Australian based manufacturer RØDE Microphones produce a wide range of microphones suited to a multitude of applications. The TF-5 is a small diaphragm, externally biased condenser design with a fixed cardioid polar pattern, representing “the ultimate expression of Rode manufacturing expertise, acoustic design and sonic purity”, according to the company. It’s certainly true that it’s no ‘me too’ wannabe, with an eye on classic designs of yesteryear; this new microphone has been created from scratch.

Designed in collaboration with Grammy award-winning classical music engineer Tony Faulkner, the TF-5 is best suited to critical recording where purity of tone and a natural, clean character are paramount. Now, I realise that few readers will be full-time classical music engineers, however producing stellar recordings of pianos, acoustic guitars and other acoustic instruments – especially in stereo – is not easily accomplished with inferior microphones.

Offered as a premium matched pair, the business end of the TF-5 pencil condenser features a brand new gold-sputtered capsule engineered to sub-micron tolerances, ensuring both optimum performance and precise stereo pair matching. Electronically, the active ingredients are a JFET impedance converter with a bipolar output buffer and, of course, like all condenser mics, the TF-5 requires 48V phantom power.

The matte black, scratch-proof casing surrounding the capsule is perforated, which is visually attractive as well as undoubtedly contributing to the mic’s performance. And although mics of this nature are inherently delicate, Rode offers a generous 10-year warranty. That said, there’s no mistaking the quality or solidity of construction here; nothing about the look or feel of the TF-5 suggests that corners have been cut in order to build to a budget. 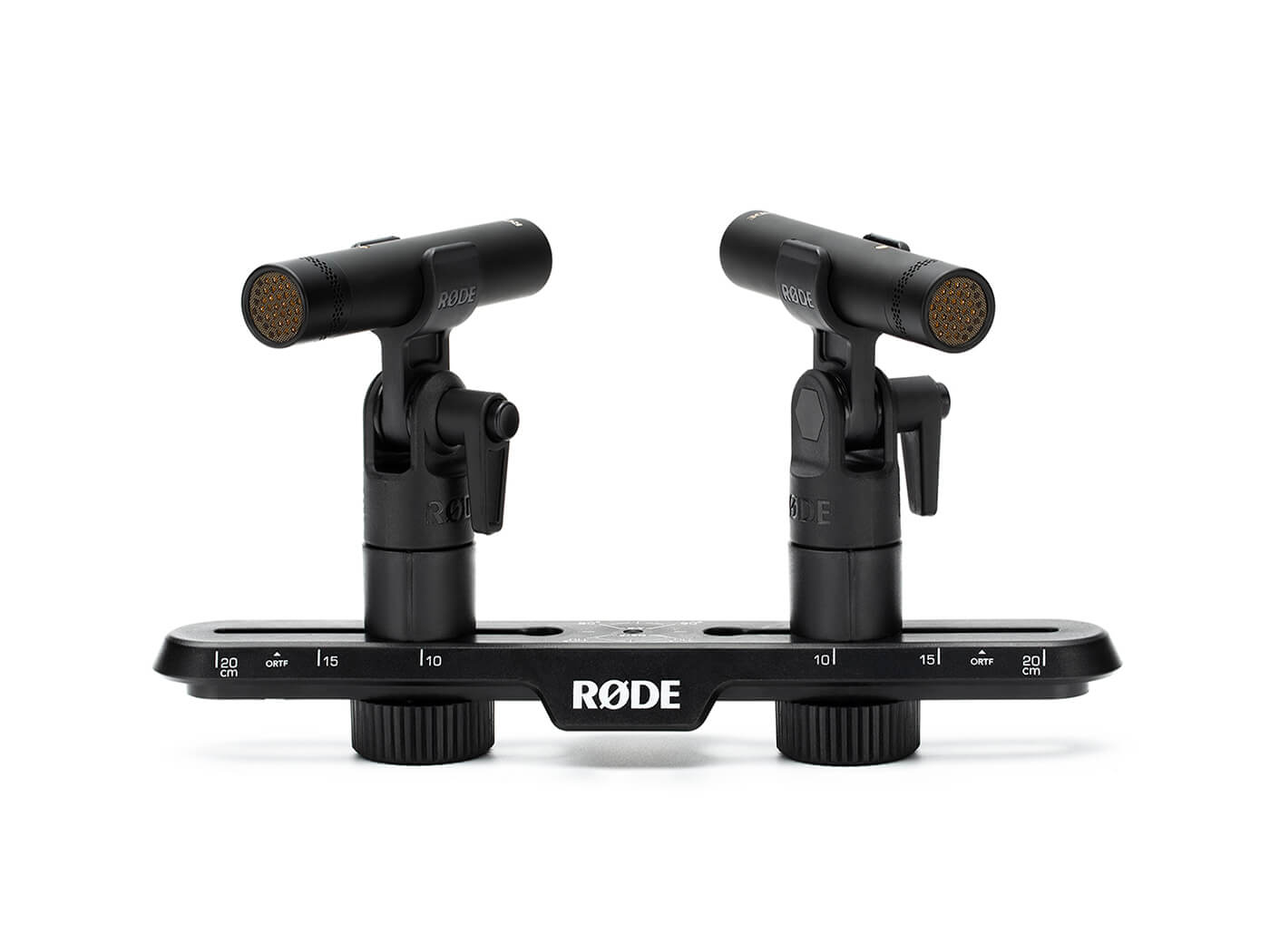 Contained in the TF-5 package is everything you need to capture a natural, believable stereo image. Besides the microphones themselves, you get a pair of mic clips, windshields and an adjustable stereo bar for precise positioning. Of course, the TF-5 is not restricted to stereo recording and, as we shall see later, single channel sources, including vocals are superbly served by it.

I won’t bore you with a full rundown of tech-specs, however a couple of things are worth pointing out. The frequency response is impressively flat from 30Hz to 20kHz, with just a slight dip in the upper-mid/treble region off-set with a rise in output above 10kHz. This voicing, as aural evidence confirms, ensures an absence of hardness and glare while emphasising upper harmonics, adding air and space to recordings. Sensitivity is reasonably high, unlike most ribbon designs for example, so your mic preamp should have no problem driving the TF-5.

My first test for the mic is to record some acoustic guitar. Using a single TF-5 pointing towards the sweet spot around 8 inches from the 12th fret, amplified through our Early Bird valve mic preamp, the premium quality of the mic is immediately apparent. Midrange clarity is superb, sounding tonally accurate and even right down through the low-mids and into the bass region.

Most notable however is the top-end, which is incredibly open, expressing shimmering harmonics along with an expansive tone rare with small diaphragm condenser mics. Most importantly though, the high frequencies are not presented in a way that might otherwise make the mic sound overly bright. As part of this initial test I exchange the first TF-5 for the second to establish the accuracy of stereo matching. An A/B test of the acoustic guitar recordings confirms the mics to be identical in every respect from tone to sensitivity to amplification. 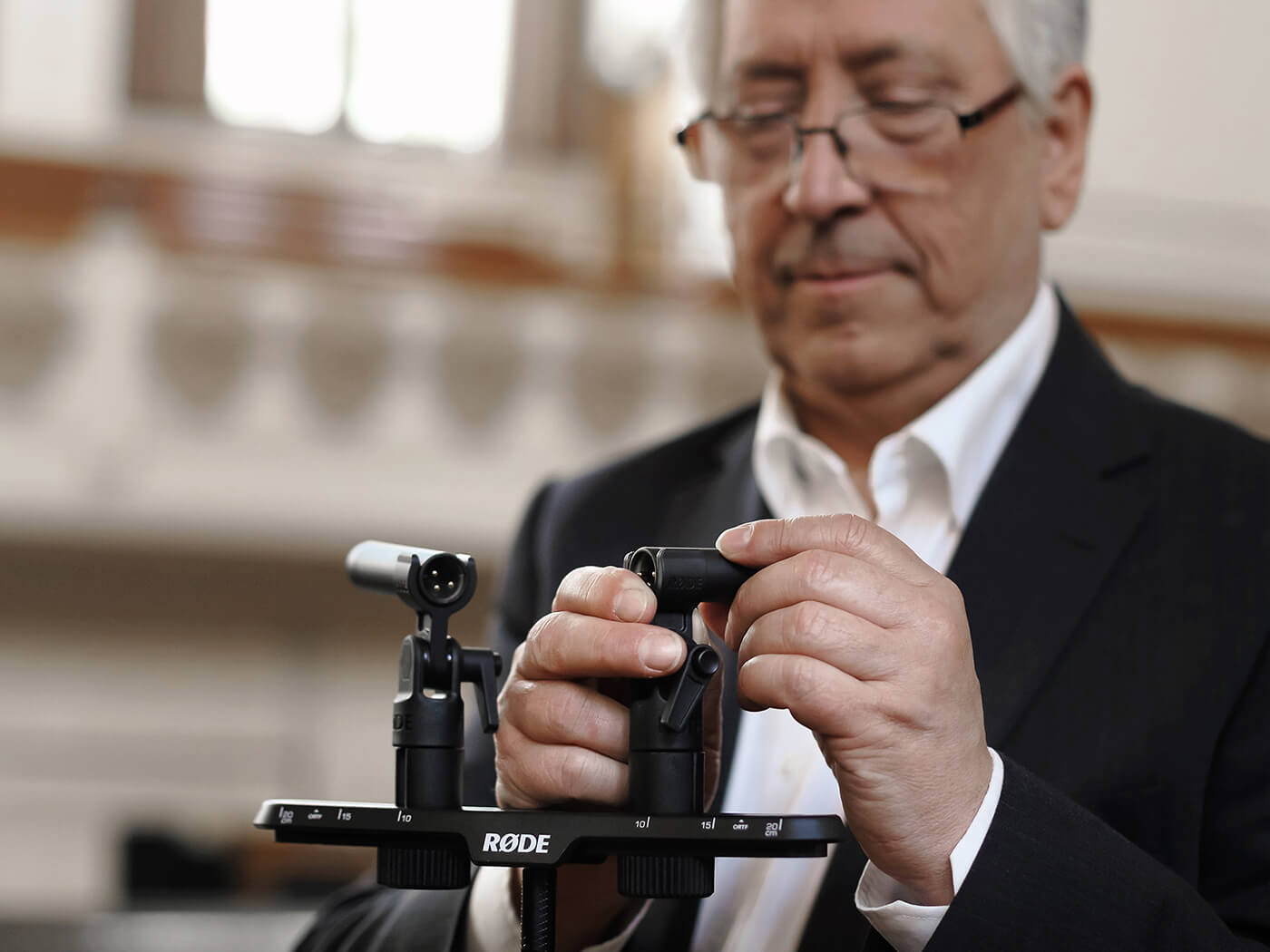 A comparison with our Neumann KM84i reveals the Rode mic to be slightly less midrange dominant than the ’84, with greater emphasis on the upper most frequencies. I also detect an extra degree of warmth in the low-mids of the TL-5, which makes it more suitable for full-range recordings where a large diaphragm microphone might be a more obvious first choice.

With that in mind, I set up the pair of TF-5s over the studio’s nicely tuned drum-kit, a beautiful 1960s Premiere Olympic. This kit is very live sounding and responds well to being simply and naturally recorded. For this task I would usually use a pair of Coles 4038 ribbon mics or a pair of AKG C414 condensers, along with a dedicated kick drum mic. It’s the latter combination I opt for, just to keep the comparison to condenser types. As I decide to use a fairly widely spaced pair technique, I leave the TF-5s’ stereo bar in the box, instead placing them on regular mic stands adjacent to the AKG C414s.

Making a simultaneous recording with all five mics (including the AKG D112 kick drum mic) going through our DDA console, I audition each stereo pair (plus kick mic) in turn. Switching between the small diaphragm Rode and large diaphragm AKG mics instantly shows the former’s ability to capture full-range sounds. While the C414 pair has a rather woody character that tends to flatter drum kits, the TF-5s give a more spacious rendition of the kit’s natural sound. The snap and body of the snare drum is presented in good proportion, while the resonance of tom-toms is highlighted to great effect. Also, with no added compression, the TF-5s reproduce all the dynamic range with ease, going from quiet to loud without constraint.

Capturing initial transients smartly is a forte of small diaphragm condenser mics and the TF-5 is no exception. Compared to the softer thwack of the snare drum via the AKGs, the TF-5s present a snappier character without sacrificing body. Indeed, the generous low-mids offered by the TF-5s flesh-out the kit’s natural timbre in a manner uncommon with pencil mics.

Setting up the TF-5s on their stereo bar as a coincident (X/Y) pair to record our upright piano, I am once again struck by the mic’s full-bodied midrange allied to a detailed yet silky smooth top end. My usual method to record stereo piano is to combine a Neumann U67 and AKG C414 in a mid/side configuration. Both techniques are perfect for creating a stable, phase-free stereo image, however the U67 and C414 combo produces a darker overall tone. I often add some 16kHz ‘air’ from a valve EQ yet the TF-5s need no extreme top sweetening. 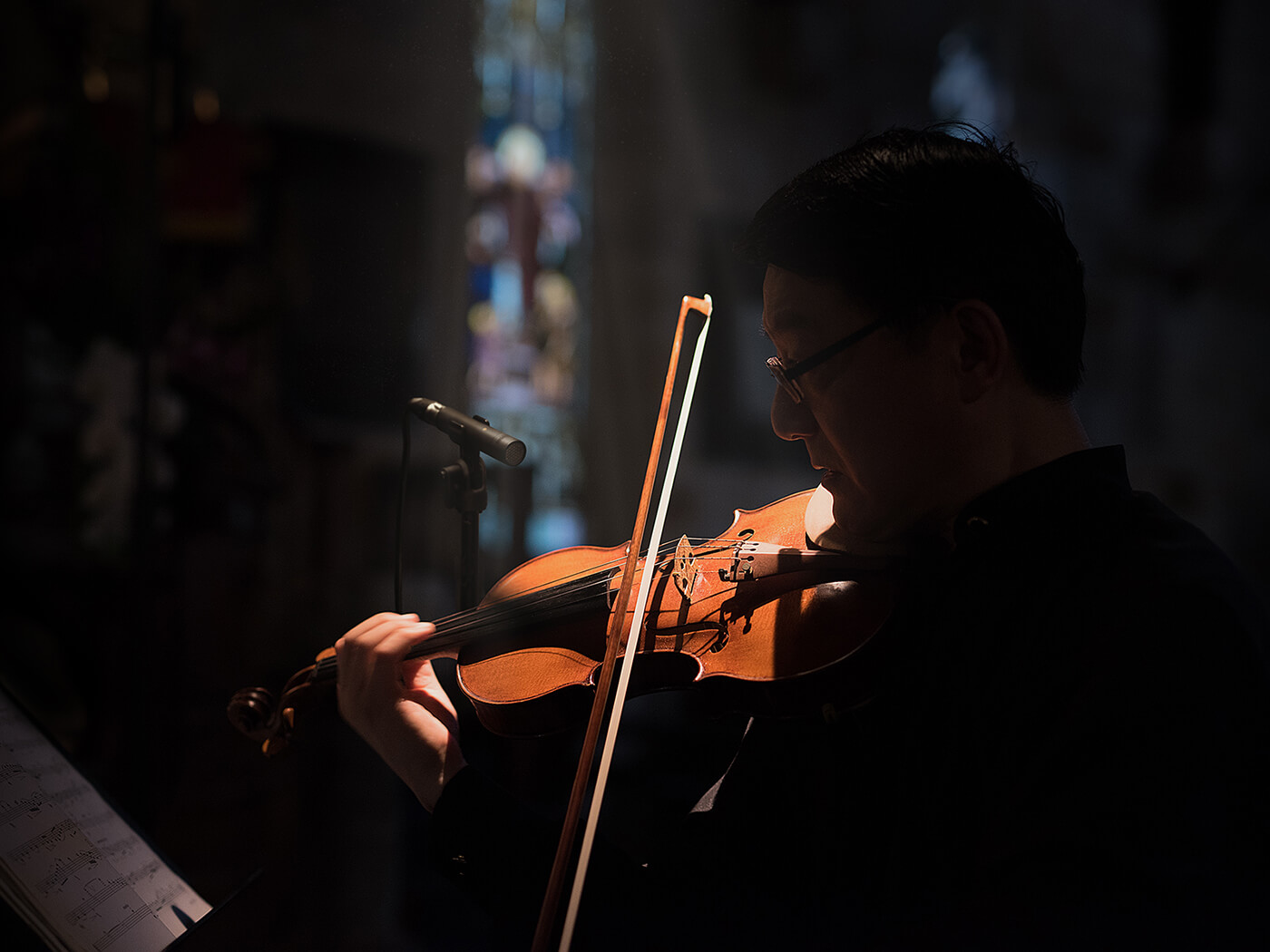 I rarely use small diaphragm condenser mics for vocal recording but having been impressed by the Rodes’ performance I employ it for some female backing vocals to accompany a male lead vocal recorded with the U67. Although the tracks ultimately receive some dynamic and tonal processing, the two raw tracks remain distinct from each other; the two mics possess a completely different sonic signature.

The new Rode TF-5 is a world-class small diaphragm condenser microphone. Its broad tonal palette is perfect for faithfully capturing all the filigree detail of musical instruments and voices. It does face stiff competition from some superb lower-costing microphones available today, yet few can match its accuracy, both in terms of tone and transient response. This perfect pair will surely become class leaders in the art of natural, true stereo recording.

A pair of precisely matched, high quality microphones is an essential addition to your microphone collection if you intend to make serious, true stereo recordings. Of course, the vast majority of us produce stereo mixes of our work, however a high proportion of those mixes are a combination of many single-channel (mono) sources panned to various parts of the stereo spectrum.

Drums are often recorded with a pair of overhead mics capturing a stereo image of the kit and a pair of TF-5s is ideal for this application. The clarity and transparency of these mics make them a perfect choice for recording classical instruments such as string sections, while a well-placed pair of TF-5s will capture a jazz combo superbly without the need of multi-tracking. Used individually, the TF-5 will faithfully record most instruments and voices – possibly not electric basses and kick drums – without adding noticeable character save for a touch of air at the top end. 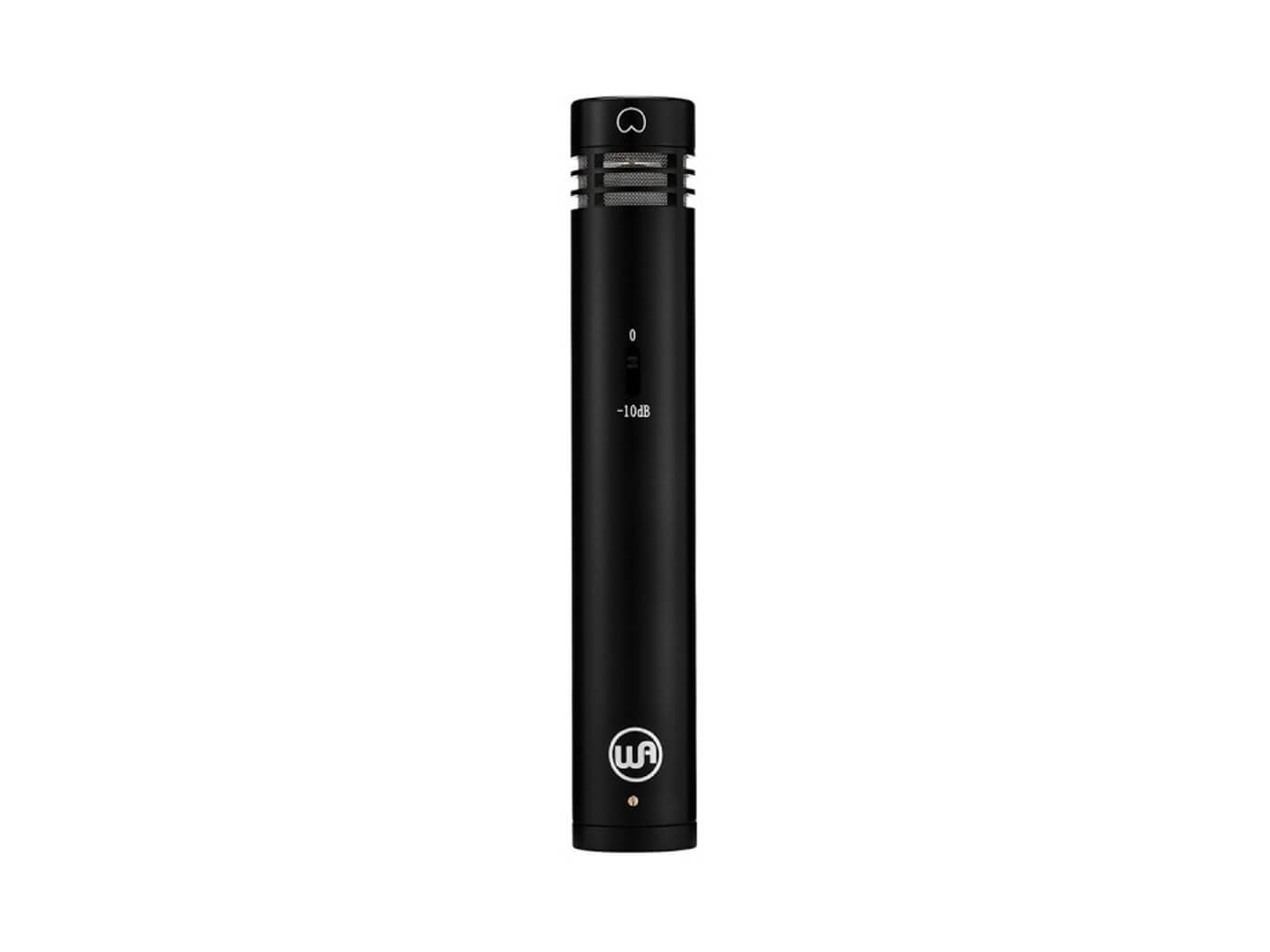 A faithful copy of the classic Neumann KM84 at a fraction of the price of a mint, used original. Featuring a vintage reproduction capsule and utilising a CineMag USA transformer, it’s a closer in design to the KM84 than Neumann’s own descendant. Like the TF-5 its polar pattern is fixed cardioid. 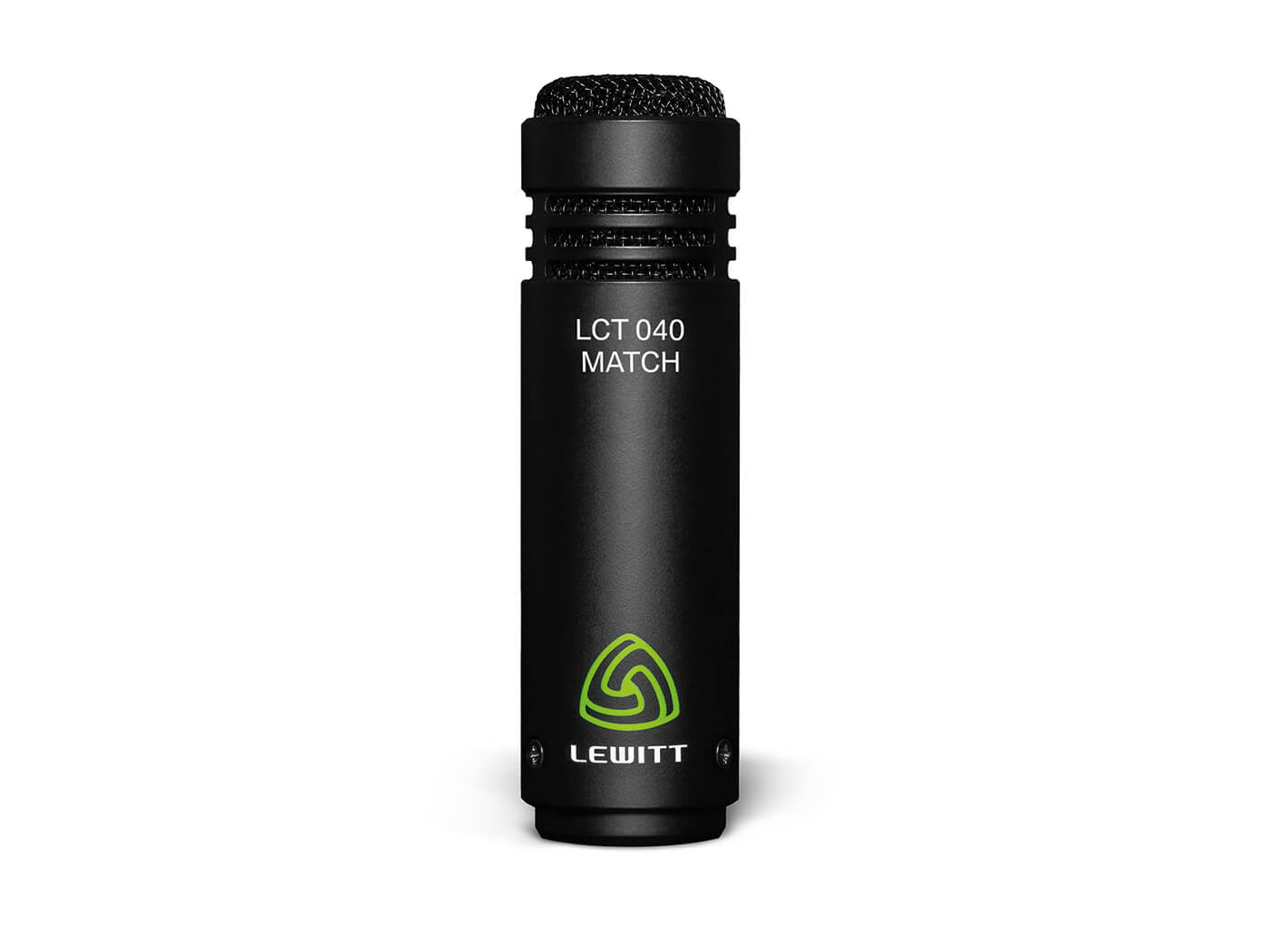 An extremely affordable entry into stereo-matched microphones, featuring a pressure-gradient transducer in the capsule. Another fixed cardioid design, the LCT 040 offers excellent value for money, though ultimately it’s not as refined or transparent as the TF-5.