Studio One – So What Is All The Fuss About?

Studio One caused a stir when it entered the DAW market in 2008. Now version 3 has landed and looks like a true heavyweight contender. Studio One Expert Matthew A. Mann, takes a look… Details Manufacturer PreSonus Price Artist: £69; Professional £279; upgrade/crossgrade £35 to £249 Distributor Source Tel: 020 8962 5080 Web www.presonus.com It happens every […] 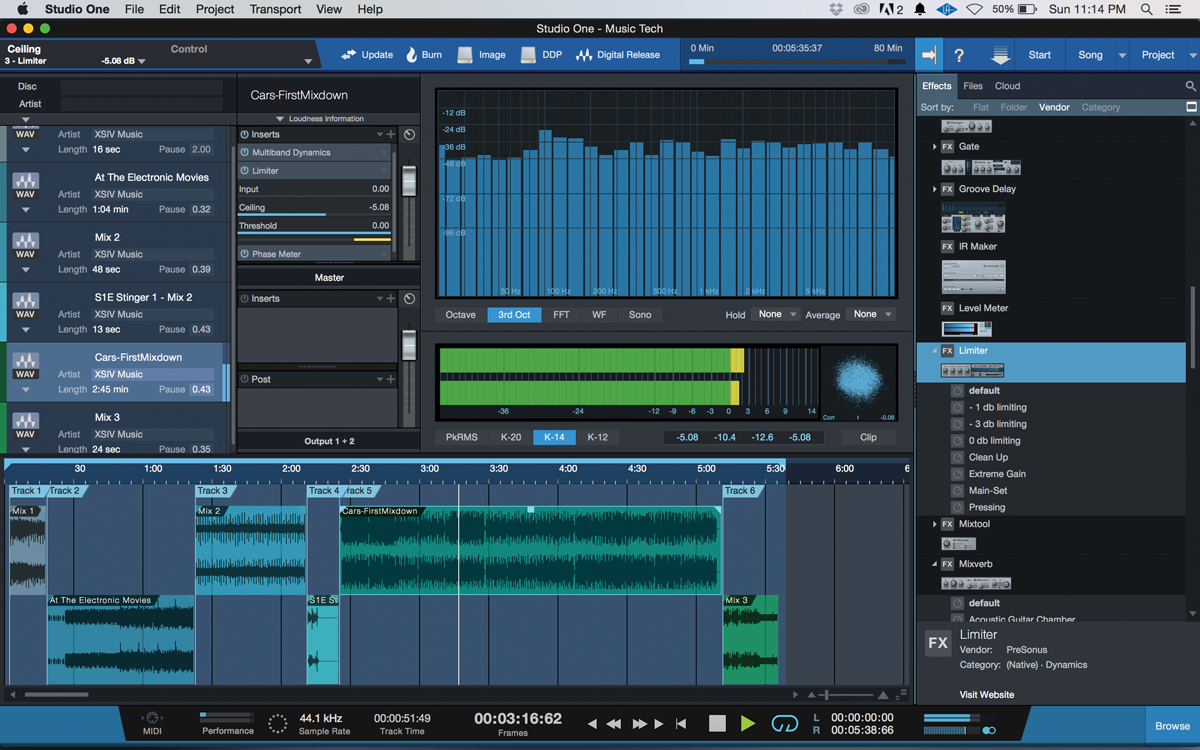 Studio One caused a stir when it entered the DAW market in 2008. Now version 3 has landed and looks like a true heavyweight contender. Studio One Expert Matthew A. Mann, takes a look… 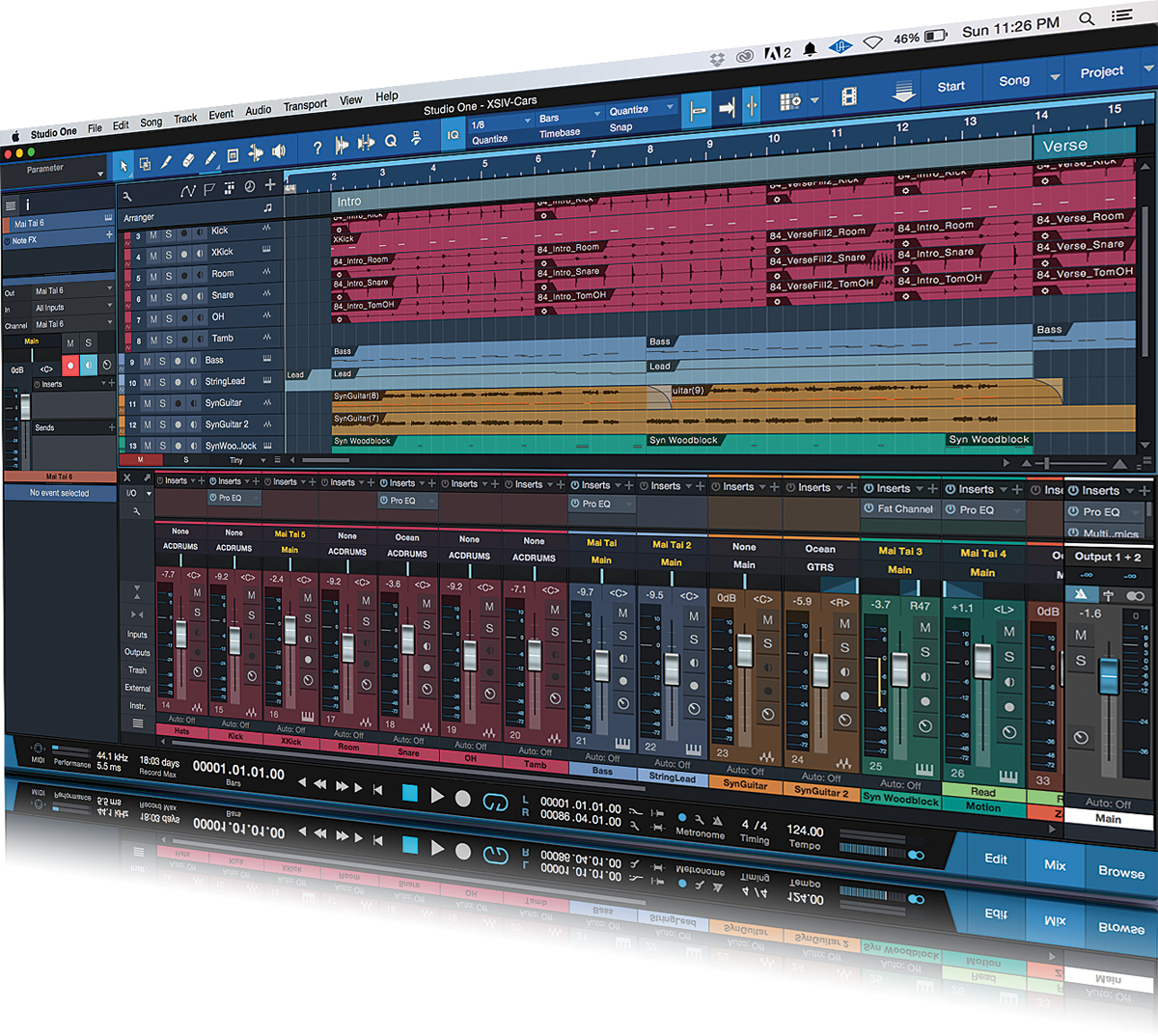 It happens every so often that a new product comes along that garners much attention – be it good or bad. Often, it’s both. The Digital Audio Workstation (DAW) market is no different. Everyone has their own opinions about their favourite DAW. Everyone says theirs is best because of ‘this bell’ or ‘that whistle’ that works better than anyone else’s.

The other long-standing argument refers to the sound of a DAW. “My DAW sounds better than yours!” can be heard being shouted from the rooftops. Of course, we logic-based [not that Logic – Ed] organisms know that the ones and zeros of a software program don’t really have a sound. Do they? One bit of bytes doesn’t really sound different from another. Does it?

These arguments have been going on for as long as there’s been a DAW marketplace. And since there’s such fierce competition among DAW makers (and such passion from their users), it’s difficult for a new DAW to break into that marketplace. 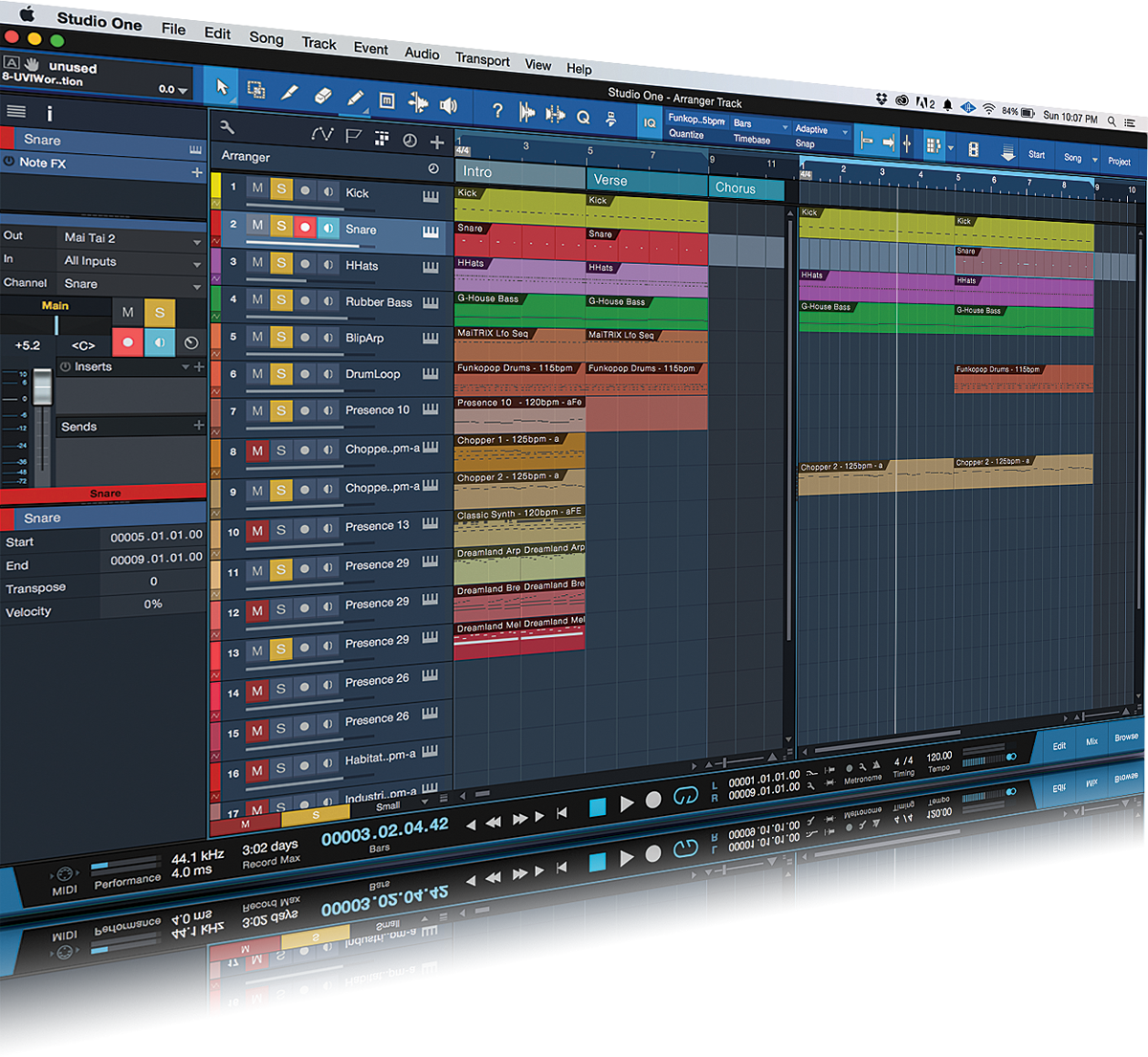 But in 2008, hardware maker PreSonus (already famous for its compressors, preamps and interfaces) entered the DAW market with a very elegant effort in the form of Studio One.

This new DAW met the market with mixed reviews for certain, but thousands of people – in search of something new and intuitive – jumped at this new workstation and sunk their teeth in… and refused to let go. Well, Studio One is no longer the ‘new kid on the block’, and is now at version 3.

With the release of v3, we get multiple new added features that change the game for PreSonus and may lead to many people jumping from their old DAWs to this shiny beast. Let’s take a look at what’s on offer, how it compares to some of the other DAWs out there, what it’s missing, and why you should seriously consider augmenting your current setup with Studio One 3.

What’s So Special About It?
So what is it that makes Studio One so popular to its ever-expanding community? It began with a simple one-window user interface. The interface was easy to use and very intuitive. It should be said that, when Studio One came to the market, it was not the prettiest DAW out there.

It was flat grey, black and light blue. So, people fell in love with Studio One for what it had inside, not what it looked like on the outside. Add its drag-and-drop capability and auto-routing functionalities and it was a no-brainer. Unlike some other DAWs, dragging an effect from the sidebar browser onto a track automatically routes the audio through that effect.

Key commands are also intuitive. For example, hitting the ‘T’ key brings up the Add Track dialog. This pop-up allows one to select from a number of options, including: a name for your track(s), the number of tracks, the type of track (instrument, audio, folder), track colour, auto-colour, track input and auto ascending (for assigning each ascending input to each new track as it’s created, and output. You can accomplish a lot with this dialog box. 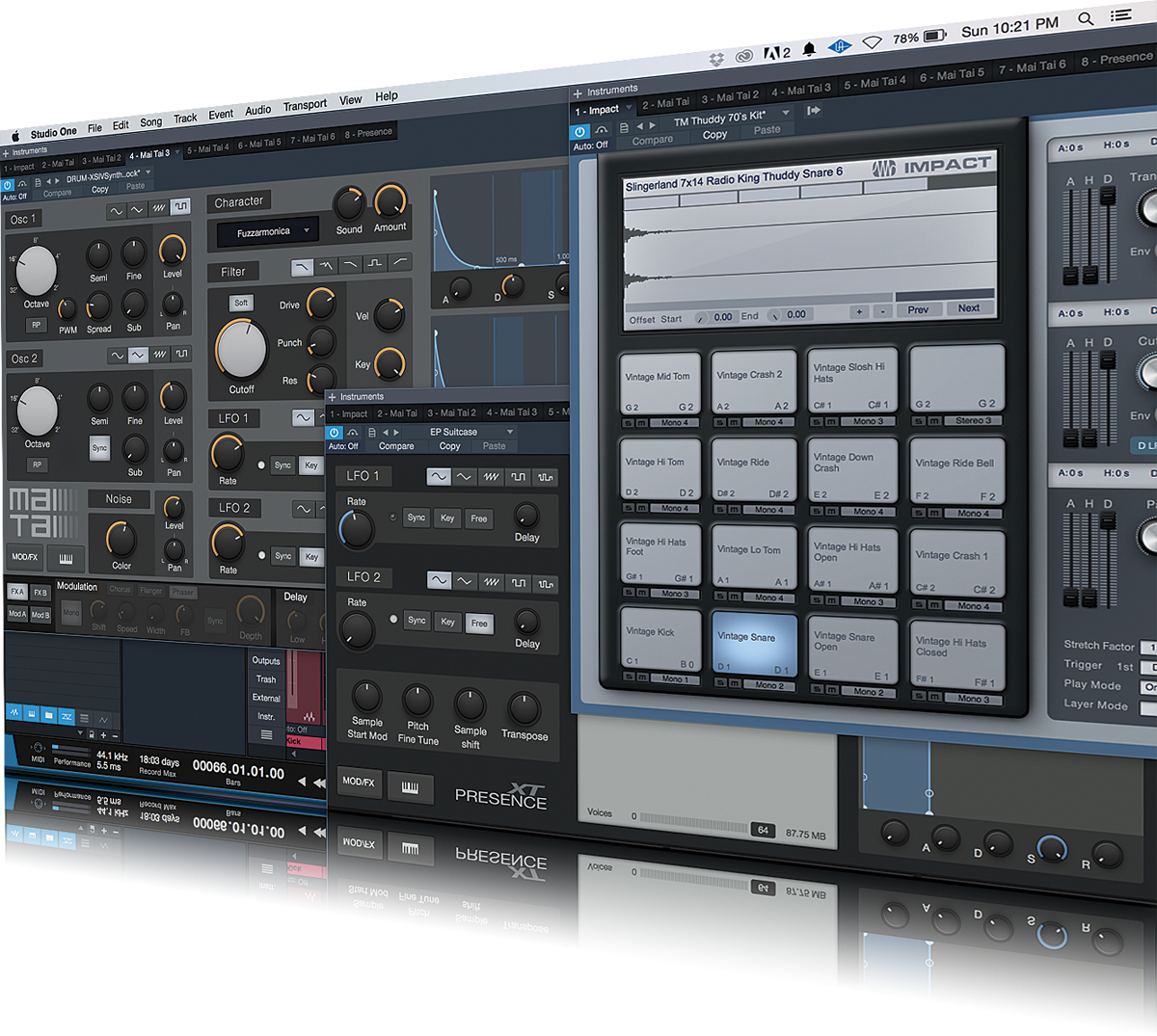 Another point of note: PreSonus doesn’t call its instrument note manipulation format MIDI… even though it may occasionally refer to it as MIDI in the manual. It is actually a higher-resolution format, allowing for much more accurate manipulation of instrument data.

This also allows for very tight integration with certain third-party developers’ plugins, such as Melodyne, for example. Melodyne Essentials (trial version on Artist, full version on Professional) is integrated completely into Studio One, and works brilliantly for pitch adjusting, format control and even developing harmonies… and it’s not an add-on insert or plugin, it’s a menu item and works really well.

Studio One also comes bundled with a few virtual instruments and some loops and samples. The amount of content you get with Studio One is dependent on which version you buy: Artist (very small loops and presets library), Producer (much larger library and added VST support for third-party instruments) or Professional (a ton of loops and samples and all the VIs on offer).

The virtual instruments included are Mojito (a mono synth), Presence (a soundfont sampler), Impact (a pretty versatile drum machine) and Sample One (a drag-n-drop sample player). They’re not the prettiest instruments, but they are very capable. And the loops and samples are fantastic. There are tons of electronic and acoustic loops, and all are very high quality.

In version 3 of Studio One, PreSonus has changed the format of its versions of the software. There is now a free version containing Presence XT (the new version of its sampler) and a limited number of instruments, effects and loops. The mid-range version is now called Artist. It includes more effects, more loops and Presence XT, Mojito, Mai Tai (its new dual-oscillator polysynth), Impact (with more kits than before) and Sample One.

The full version is still called Professional. It adds everything from the previous versions, and also support for VST2, VST3 and AU instruments and effects, the entire PreSonus Effects Suite, ReWire, and third-party sample libraries from EXS, Kontakt, Giga and SoundFonts in Presence XT. It also adds the Project Page for mastering your projects, which I’ll touch on later. 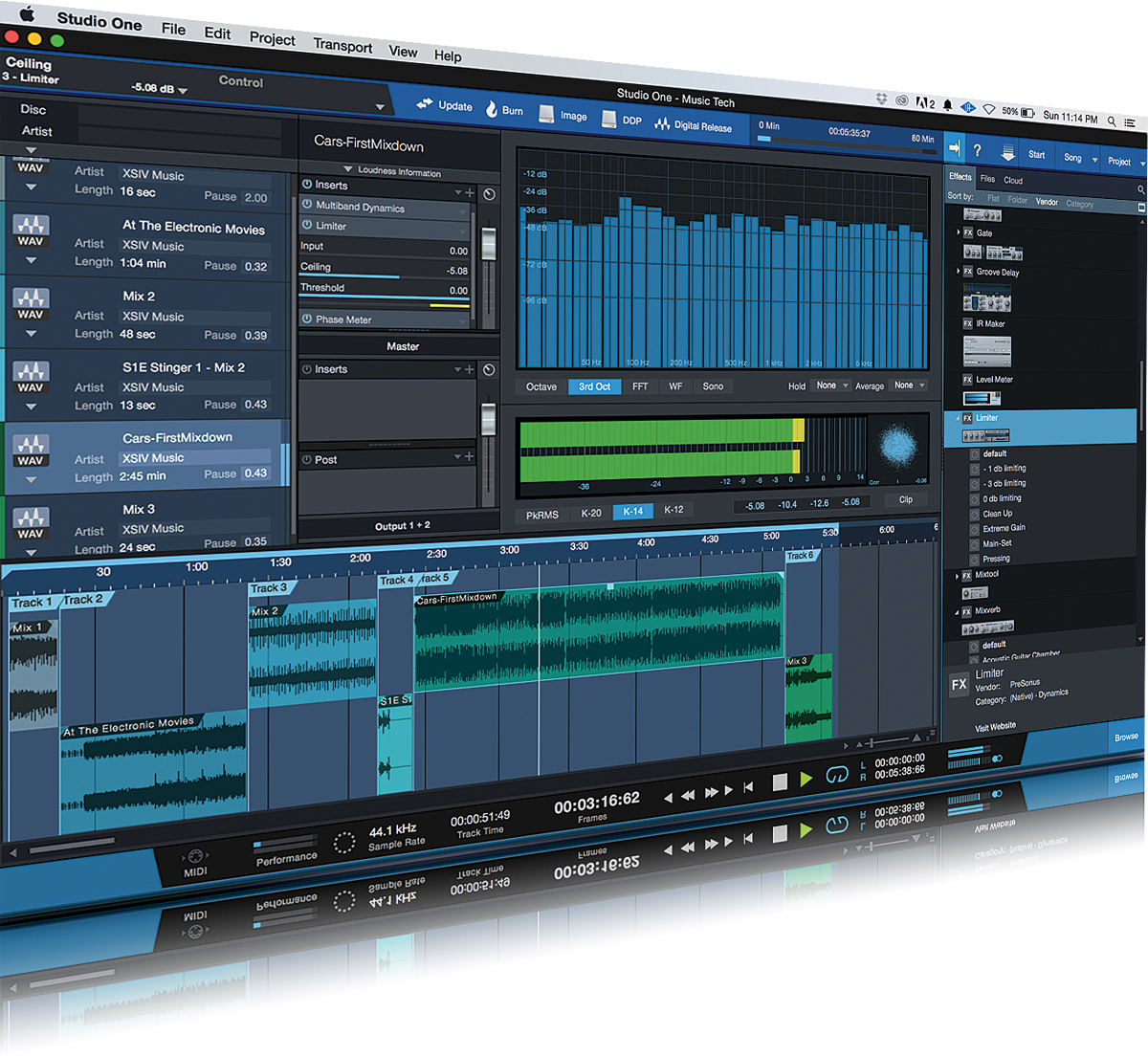 The Professional version of Studio One 3 introduces the Project Page

A songwriter’s toolkit
This most recent release of Studio One adds some incredibly powerful features designed to help the songwriter/composer get the most out of Studio One and enhance creativity. The Scratchpad and Arranger are a powerful combination that let you develop different arrangements and save them within your songs.

You can also try out different solos or instrumentation within the Scratchpad and then drag them into your timeline. You can save many different Scratchpads in your project, too. It’s almost like loop-based recording and arranging, but in a timeline. This is also nice because you don’t have to set up new tracks to try your different ideas, and each track is already associated to your favourite effects.

The Project Page
The Professional version of Studio One 3 comes with a very capable integrated mastering solution called the Project Page. In the Project Page, you can drag your rendered stereo tracks from each of your songs. From there, you can arrange them (called sequencing), add as much or as little silence between each song as you want, and then add mastering-grade processing to sweeten the lot.

The Project Page’s brilliance lies in its complete integration with the rest of Studio One. Let’s say you have your stereo masters laid out and ready for final sweetening, and you hear a mistake or want to tweak the EQ on a particular track or instrument in one song so it will sit better in the mix.

You can go back to the Song Page for that particular song, make your changes, save your song and the Project Page stereo master will then update automatically to reflect the changes you made.

A well-respected mastering engineer has said: “Studio One may soon become a ‘game changer’ for the mastering community.” This seems to be pretty much the case for the home studio community as well.

The Verdict
All in all, Studio One is a fantastically simple DAW that allows the artist the freedom to create without getting bogged down in all the technical know-how. And it’s complex enough to provide everything an artist needs to go from first idea to a mixed/mastered CD, all within one application.

While its layout and a few missing features may turn a few people away, its pedigree and PreSonus’ track record for listening to its users and giving them what they want mean that Studio One is here to stay and will continue to grow into, quite possibly, the best DAW out there for the songwriter, recording/mixing engineer, mastering engineer and producer. It’s no wonder PreSonus is calling it “the next standard”.

Other new features that you can find in Studio One 3 that make this the new Composer’s Toolkit include: