Could this be the portable interface UR looking for? Steinberg certainly thinks so, as Hollin Jones finds out. Details Price £284 Contact via website Web www.steinberg.net Amazon.co.uk Widgets Steinberg’s now longstanding partnership with Yamaha has seen the German developer release steadily more hardware products over recent years, and we were impressed with the UR22, its compact USB-powered […] 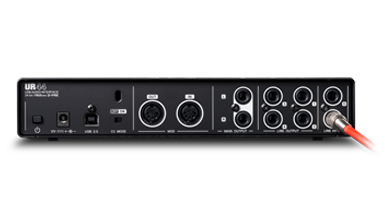 Could this be the portable interface UR looking for? Steinberg certainly thinks so, as Hollin Jones finds out.

Steinberg’s now longstanding partnership with Yamaha has seen the German developer release steadily more hardware products over recent years, and we were impressed with the UR22, its compact USB-powered audio interface. The UR44 is, as you might have guessed, part of the same family but with more ins and outs and a few more tricks up its sleeve. It is roughly twice the size but retains the robust build quality. Although a little heavier than it looks, the UR44 feels like a pro piece of kit and will certainly survive being carted around.

Ins and Outs
It’s a 6×4 USB 2.0 interface and sports a good selection of ports that make it suitable for a range of applications. Around the back you’ll find two line-level inputs, four line outs and a main output so you can connect two sets of monitors if you wish. There’s MIDI I/O as well as a USB 2.0 connection to your Mac or PC, a lock port and a mains power socket (this unit is a little big to power over USB). There’s also a CC Mode switch which is interesting because it toggles Class Compliant mode. Switch this on and connect to an iPad via Apple’s Camera Connection Kit and the interface works as a multi-channel I/O device for Cubasis or other iOS DAWs. So if you own both, you’re getting both a mobile and a studio interface.

On the front panel are four combo inputs with individual level controls, phantom power and peak LEDs plus a master output knob. You also get dual independent headphone outputs with separate level controls, which is a really nice feature to have and means that both a performer and an engineer (or, indeed, two performers) can have a separate monitor mix. 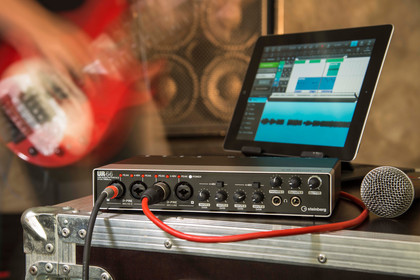 The UR44 is equally impressive on the inside, with four Class-A D-PRE preamps (as found in some of the company’s higher-end hardware) and top-flight converters operating at up to 192kHz/24-bit. Gone are the days, it seems, when only the most expensive interfaces could record at such high sampling rates.

Monitor Marvel
If you use the UR44 with Cubase – a copy of Cubase AI is included – the monitoring and setup tools are integrated automatically into the software. These can also be opened as a separate app called dspMixFX that provides software control over the hardware. The box actually contains a DSP chip, which as well as offering latency-free monitoring (a must these days) gives you onboard FX comprising EQ, compression, reverb and (in the 2.0 firmware update) four guitar amp effects called the Guitar Amp Classics. 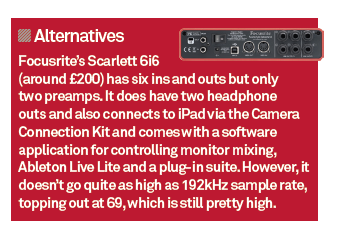 You can record latency-free with these effects on the headphone mix but also capture a dry signal. Since they are also supplied as VST3 plug-ins, you can re-apply them after recording to re-create the effect. Obviously, this is most useful if you’re using a VST host like Cubase rather than Logic, but in any event, being able to record vocals, for example, with configurable compression and reverb on the headphone mix is incredibly useful. The REV-X and Sweet Spot Morphing Channel Strip compressor are simple enough effects to use, but have nice interfaces that let you tweak their settings from inside the software for a more flexible monitoring workflow.

The software also enables you to set up/save multiple presets so you can, for example, flip between session templates depending on who you are recording. There’s even a loopback function that merges the signals going through the interface and sends them to the computer as one specifically for internet streaming. As such it could be used for broadcasting gigs if combined with a streaming service

R U Converted?
The UR44 is almost as portable as its smaller sibling but offers quite a lot more in terms of power – not just the extra ins and outs but the Class Compliant mode, dual headphone outs, DSP-powered effects and software-accessible mixer. As such it’s a significantly more flexible interface and not simply the same with a couple more channels. Although it’s compact, you get a lot of bang for your buck and if you’re using Cubase you will find the integration particularly smooth.

When used with other DAWs it’s still a great proposition, the zero-latency monitoring and DSP-driven effects making tasks like providing reverb to vocals or effects to guitars that much easier. Plumbed into an iPad-based setup it’s equally impressive, and paired with the company’s Cubasis iPad app it’s a remarkably accomplished, ultra-portable recording solution. If mobility isn’t your thing, the UR44 will make a great studio interface. The preamps are crystal-clear and the build quality excellent. If your I/O needs are modest but you still want pro-level features like direct monitoring and DSP-powered effects, the UR44 is an excellent choice. 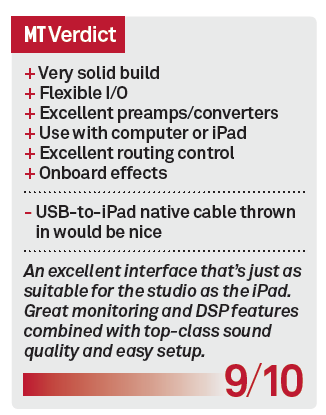