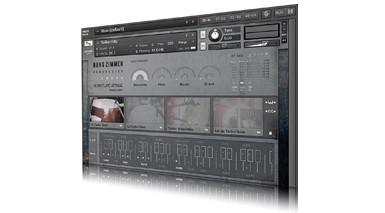 Hans Zimmer re-created the techniques used for The Dark Knight and other films when recording and mixing his epic percussion library. Keith Gemmell drums up a storm. 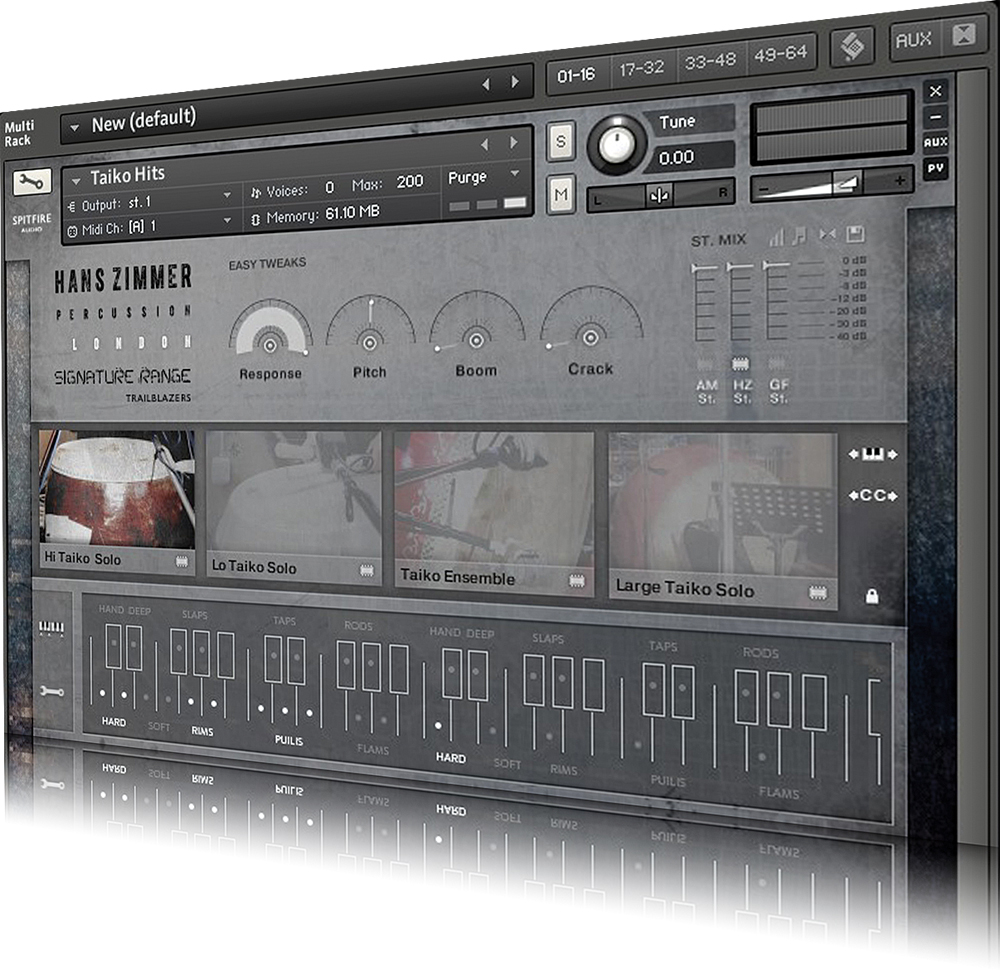 When Hans Zimmer called Christian Henson of Spitfire Audio and suggested a collaboration for the realisation of his HZ Percussion project, the answer, of course, was yes. At Hans’ request it was announced to the world immediately and expectations would inevitably be high, so they had to deliver. For this first instalment, therefore, they set about enlisting the services of Paul Clarvis, Steven Henderson, Gary Kettle and Frank Ricotti, four of the best percussionists available on the London session scene. As is usual with most Spitfire libraries, everything was recorded at Air Lyndhurst. It’s only available online, though, and it should be noted that it’s a pretty substantial 200GB download.

Thunderous Drums
HZ01 is chiefly an ensembles library except for the Taiko, which also has solo patches for all three drums – Hi Taiko, Lo Taiko and Large Taiko. Featured in many a Hans Zimmer score, they sound fantastic when played together as an ensemble but they do produce a huge amount of bandwidth, hence the solo options. The ensemble here was recorded tutti and not derived from the solo samples. This gives you the option of mixing the solo drums together with the ensemble for a truly thunderous, cinematic drum sound.

As popular as the Taiko patches are likely to be, there are plenty of other drums on offer to experiment with. Lo Hits features a selection of orchestral and marching bass drums recorded in the Air Lyndhurst gallery, plus a massive-sounding Surdo ensemble. Exotic drums from around the world are also in evidence, but the emphasis is not, as in most other libraries, on ethnicity. Instead, the drums (bombos, boobams, dhols, paper djuns and tombeks) were played in a way that makes them more suitable for western cinematic use.

There are some intriguing drum pairings, too, such as buckets with snare, crusher and darbuka ensembles. Other treats include an amazing selection of metal hits featuring anvils played with iron hammers and sticks (surprisingly delicate-sounding), large resonant gong drums, piatti and tamtam ensembles. Our particular favourite, a set of three timpani ensembles played with hard beaters, rods and soft beaters, rounds off what amounts to an amazingly diverse percussion arsenal. 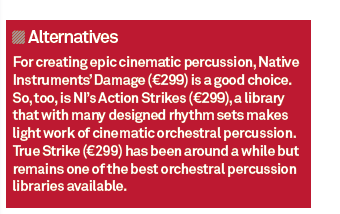 Personality Mix
The main part of the library, Artist Elements, contains three sets of identical patches organised as groups of instruments. Each set presents a distinctly different room perspective from three different engineers: chief Air Studios engineer Geoff Foster, renowned cinematic scoring mixer Alan Meyerson, and Hans himself. This was a very interesting concept because with three sets of expert ears at work on the same instrument groupings we get three personal takes on the room and enough material to cover a wide variety of tastes and styles. 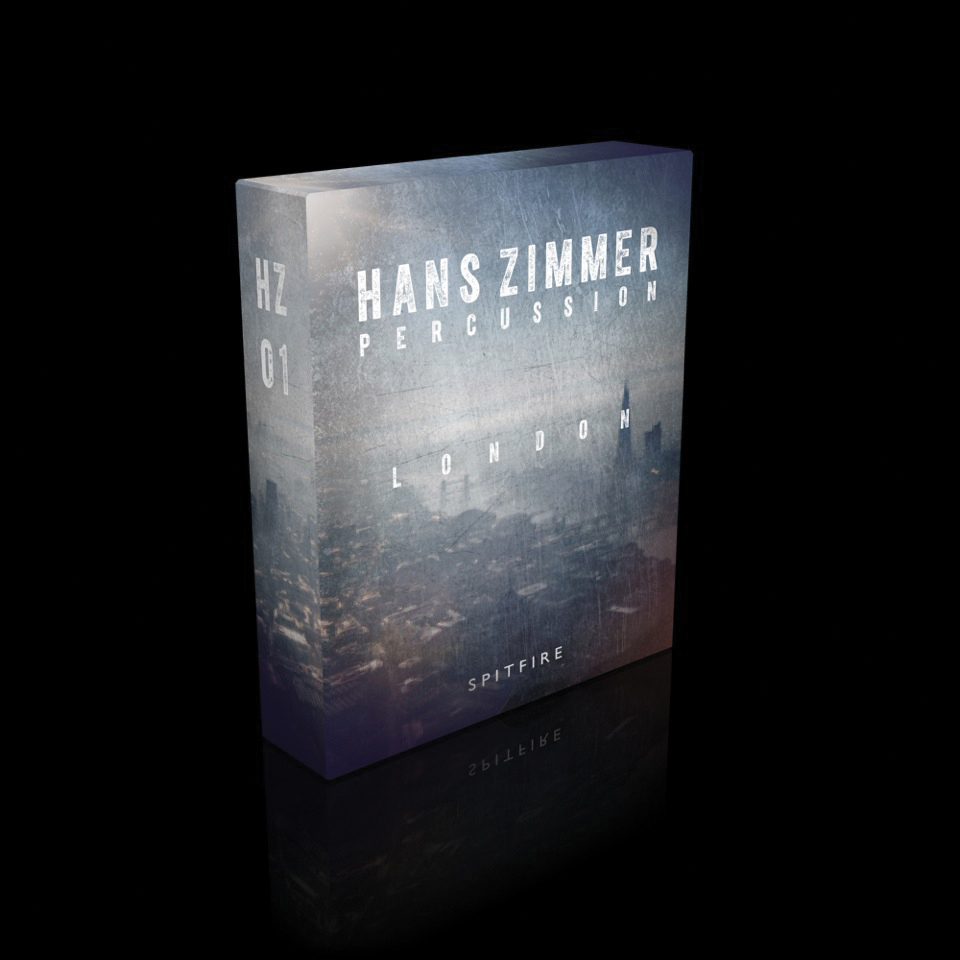 As with other Spitfire libraries, each patch loads with five microphone positions and a mixer. There are plenty of controls, but as well as the more advanced options there’s a handy set of ‘Easy Tweaks’ for making fast adjustments to the dynamic response, pitch and timbre of the selected drums.

Size Matters
This is a huge library and we haven’t seen all of it yet because Spitfire is releasing it in stages. As well as the main library we’ve also received an extra set of pre-mixed stereo patches, again mixed by the three different engineers. Used individually or when mixed together, we found them very useful for quickly finding the type of sound required without having to mess with individual microphone settings. Still to come are additional mics, 5.1 mixes and material from two more engineers. We can’t wait.

For those involved in the world of cinematic audio production, HZ01 has to be a serious consideration. The audio quality is top-drawer, and with the collaboration of Hans and other close working associates the sheer variety of mixes distinguishes it from other percussion libraries. It’s not cheap and it takes ages to download, but if you want the best, it’s worth the wait 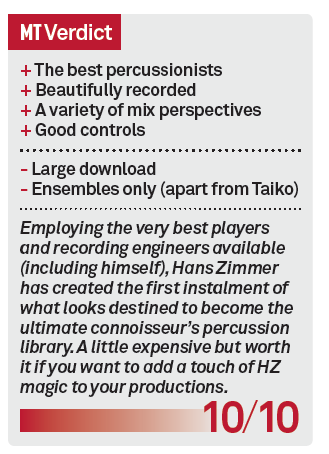 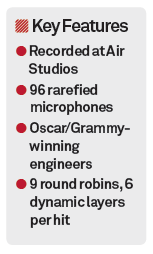