Sound Forge has been around on the Windows platform for many years and is much loved by musicians and audio professionals who use PCs. Sony has never seemed particularly keen to jump into the Mac software market, producing as it has done many media- creation packages tailored just for Windows. That seems to be changing […] 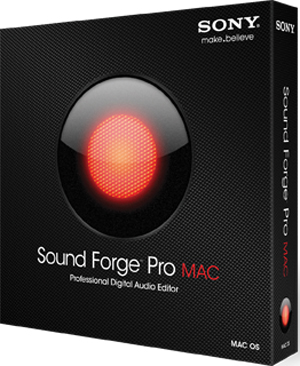 Sound Forge has been around on the Windows platform for many years and is much loved by musicians and audio professionals who use PCs. Sony has never seemed particularly keen to jump into the Mac software market, producing as it has done many media- creation packages tailored just for Windows. That seems to be changing now, though, first with Spectralayers and now this, a version of Sound Forge for the Mac.

Sound Forge has been around on the Windows platform for many years and is much loved by musicians and audio professionals who use PCs. Sony has never seemed particularly keen to jump into the Mac software market, producing as it has done many media- creation packages tailored just for Windows. That seems to be changing now, though, first with Spectralayers and now this, a version of Sound Forge for the Mac.

Happily, it’s built from the ground up for Apple computers and so doesn’t have that ‘ported’ feel that can be an issue for some users. Even if functionality is identical, Windows graphical elements don’t sit well with the OSX GUI. This is usually a problem only when an established app leaps from one platform to another, not when development has always been dual- platform, as in the case of many DAWs. 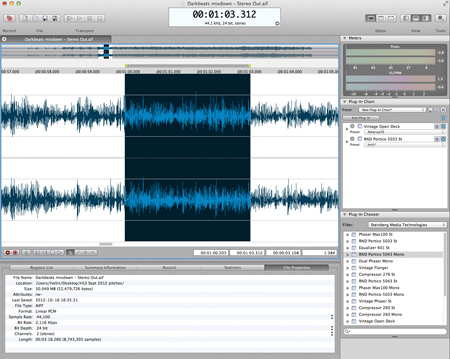 Sound Forge Pro Mac is a modest download and installation is as simple as dragging and dropping to your Applications folder, then booting and entering your serial number. The first thing that strikes you is how very Mac-like this app is. There’s not a hint of Windows about it – in fact, on first loading it kind of looks like iTunes.  And in the interests of being non-partisan, I’d go so far as to say it looks as slick as WaveBurner, Apple’s own wave editor, while feeling lighter on its feet.

Sound Forge has a single-window interface with various configurable sections that can be set up via the Tools menu at the top right to assign different sections to different areas of the application. Most parts of the window have draggable borders, although you don’t seem to be able to save window layouts. Sound Forge is a capable multitrack audio recorder that can capture up to 32 channels at once in 64-bit, 192kHz resolution. Adding and record-arming tracks is easy and it immediately saw the manifold interfaces and virtual routing setups on our MacBook Pro without issues. The Media Browser section lets you navigate your hard drive, search, set favourite folders and manage files.

Once audio has been recorded or imported you can edit it, and as well as cutting, pasting, dragging and moving you can zoom in to sample level and use Event and Envelope tools to make precise changes to audio clips. To help with your workflow you get support for Regions, which can be labelled, edited or exported as well as divided, looped and fine-tuned. This is managed in the Regions list at the base of the window, where you also find audio stats, file properties and more. There’s event-based editing, which enables you to divide a sound file into any number of independent sections that can be arranged and rearranged on the timeline. Copy and paste, fade, crossfade and slip or trim event contents to achieve complex edits. You can switch the display format, too, so it displays time in units anywhere from samples through seconds to SMPTE.

Part Of The Process

As well as audio recording, editing and analysis, Sound Forge is adept at processing your sounds and you get a range of tools to help you to achieve this. The Process menu has all the usual options for normalization and fades as well as giving access to the specialised bundled tools, which include iZotope’s signal-rate converter and dither tools and the Time Stretch tool. In fact, Sony has included a number of its own excellent processing tools in this section and what they may lack in visual flair they make up for in terms of audio quality.

Sound Forge is, of course, able to see the plug-ins installed on your system (AU and VST formats) and has a particularly elegant system for dealing with them. The plug-in chooser section is clean and simple, showing lists of plug-ins grouped by categories, vendors, types and groups (or with the option to show all in one list). It’s the most elegant plug-in chooser I have used in a while, thanks largely to its simplicity. Click on a plug-in to see a list of presets specific to it (if the plug-in supports this feature); drag and drop a plug-in or a preset into a document to apply it to a specific section of audio, or drag it to the Plug-in Chain section to add it to a chain. Right-clicking can also be used for either of these tasks.

The Chain window is equally clear, presenting you with concise tools, buttons and options. When mastering or restoring audio, plug-in chains are vital tools and here they are simple, powerful and easy to manage.

As part of the bundle you also get iZotope-powered restoration plug-ins including the Declicker, Denoiser and Declipper, as well as six mastering-specific plug-ins including limiter, reverb, exciter and stereo imaging. These would appear to be derived from Ozone – which is no bad thing – and they are great for processing mixdowns to give them a radio-ready sound. It would be nice to have an option to use them all in one plug-in like Ozone does, but you can easily get around this by creating a plug-in chain.

When it comes to saving documents you can save to a multitude of audio formats, though not quite as many as the admittedly much more mature Windows version allows. Nonetheless, all major bases are covered, including AIFF, WAV, MP3 and AAC as well as some more obscure formats. Naturally, you can import in many audio formats, too, though it’s a little disappointing to not have native video-file playback support. It seems likely that this will be added at some point, since this is, after all, a completely new build of the software. It would also be nice to have native Red Book CD-burning capability, which isn’t included. It also lacks batch processing, which is pretty important for a lot of pro users.

Sound Forge Pro for Mac is an excellent wave editor as well as an audio recorder and processor. Perhaps inevitably it lacks the feature set of Sound Forge for Windows, which is now at version 10 as opposed to the Mac’s version 1. It is, however, a very solid and promising start. The interface is beautiful and slick, well organised and easy to learn and use. It feels kind to the CPU and workflow and end results are very good. Whether it can really be called a ‘pro’ app while it lacks support for batch processing, CD burning, video support and a few other niggles is open to question. Certainly, it’s excellent at what it does, but there are gaps at present. We’d fully expect Sony to add these as time goes on. In the meantime, Sound Forge can certainly claim to have arrived on the Mac.

Despite some feature omissions, we’d expect to see Sony adding tools over time. As it stands, Sound Forge Mac is a good audio recorder and editor with a great interface.