by MusicTech
Roland
#Cakewalk By BandLab#DAWs

Cakewalk’s SONAR, now owned by Roland, is one of the industry’s longest-running DAWs, having been around for almost as long as it has been possible to make music with computers. The last major update – X1 – introduced a totally new user interface known as Skylight. As the interface had long been identified as an […] 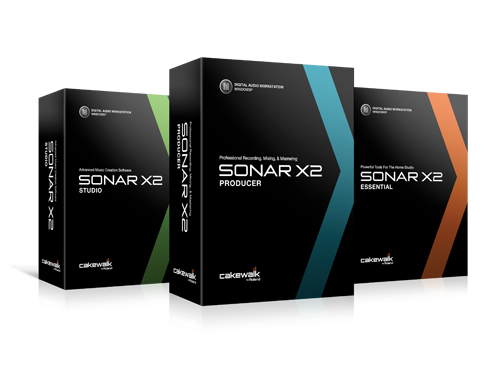 Cakewalk’s SONAR, now owned by Roland, is one of the industry’s longest-running DAWs, having been around for almost as long as it has been possible to make music with computers. The last major update – X1 – introduced a totally new user interface known as Skylight. As the interface had long been identified as an area in which SONAR was playing catch-up with the competition, this was welcome news.

Cakewalk’s SONAR, now owned by Roland, is one of the industry’s longest-running DAWs, having been around for almost as long as it has been possible to make music with computers. The last major update – X1 – introduced a totally new user interface known as Skylight. As the interface had long been identified as an area in which SONAR was playing catch-up with the competition, this was welcome news.

Version X2, then, brings yet more tweaks, workflow enhancements and other goodies, as well as some new plug-ins and tools. We have looked at the flagship Producer edition here, but Studio and Essential versions also exist, each at a lower price and with an accordingly tailored feature set.

The full application installer is an approximately 6GB download – and that’s without the optional included extras that power the many bundled instruments. Installation itself is fairly straightforward and you can customise the process to choose which of the many plug-ins are installed; an Easy Install option includes everything, though it bumps up the bare bones 4.5GB installation to 20GB. Windows 7 and 8 are supported, though XP and Vista, now rather long in the tooth, are not. You’ll need a dual-core CPU and 2GB RAM at least, but, as ever, a faster system always ensures a smoother ride.

Before looking at what’s new in X2, let’s recap what SONAR does. It’s a DAW in the truest sense of the description: a complete production environment with a wealth of features that enable you to take your ideas from initial sketches to finished masters – and throws in things like remix and live performance tools to boot. You get unlimited audio and MIDI tracks and a 64-bit, 384kHz sound engine as well as 32- and 64-bit versions of the app itself. In X1 the user interface was radically overhauled, replacing what could at times be a cluttered UI with Skylight, a much simpler and better-organised system.

SONAR has always been among the most generous DAWs in terms of the sheer amount of plug-in content you get, and there are 20 virtual instruments included as well as 59 audio and MIDI FX, in addition to the ability to load any third-party plug-ins, too. While some of these are really legacy instruments, others are more cutting-edge and the audio effects in particular have begun in recent years to focus more on studio-grade mixing and mastering. It’s tricky to draw direct comparisons, but SONAR’s bundled goodies are probably rivalled only by Logic’s in their breadth. Interestingly, of course, SONAR is Windows-only and Logic is Mac-only.

The interface revamp in X1 was so great in its scope that part of what’s new in X2 is a further refinement of that interface and the improving of various tools and techniques. The clearer, more user-friendly and configurable Skylight is still here, of course, though there’s now some new stuff as well. In addition to dockable panels, X-Ray windows and screensets, there’s now Timeline Zoom, which lets you drag up or down with the mouse to zoom in or out on a project while the playhead remains centred – great for quickly navigating or jumping to a specific zoom level. You also get Auto Zoom, which expands track heights on selected tracks automatically. Neither of these is unheard of in competitor DAWs, but they’re a welcome addition nonetheless. You also get enhanced Aim Assist, making dragging and snapping more accurate. There are improved snap controls, too, making it easier to snap to non-rigid values.

Numerous workflow enhancements are evident in X2. Left-click+drag now range-selects in the timeline; right-click+drag performs a lasso selection. Data views have been updated to better reflect the Skylight system and you can choose to view different clips automatically in different editor windows such as Piano Roll, audio or scores. The Piano Roll editor can now be zoomed more intelligently when in place, and overall the editor window improvements make it easier to work with data without leaving the main timeline view. Smart Grid dynamically sets the snap resolution and line display based on zoom level.

The Smart Tool, one of SONAR’s best features, has also been improved and now more or less removes the need to manually switch tools if you don’t want to. As you mouse around the interface, the Smart Tool adapts itself to whatever kind of data/parameter you hover over. It quickly becomes second nature and is incredibly handy for workflow. In many cases you don’t even need modifier keys to access the function you want.

There have been changes to automation, too, and you now get Automation Lanes that can be quickly assigned and edited, as well as new automation modes. The Smart Tool ties in nicely with the new automation features, helping with rapid entering and editing of data. Recording in takes has been improved, and you can now record directly into lanes when performing multiple takes. Elsewhere, the Matrix view has been revamped, offering per-cell trigger resolution, flexible routing and support for external MIDI hardware. SoundCloud support is integrated, as is export to MusicXML and CD burning. 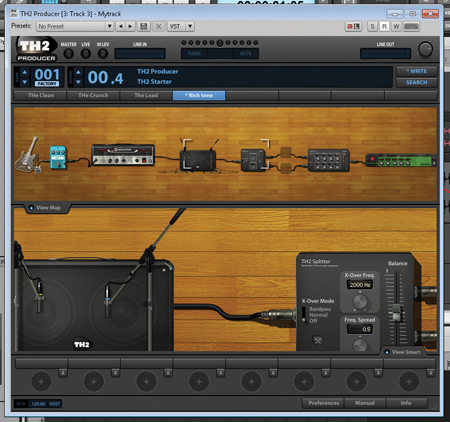 SONAR comes with an impressive range of instruments and effects, a comprehensive list of which can be found on Cakewalk’s website. In version X2 you get a few new ones, starting with the Overloud TH2, a guitar amp/speaker emulation plug-in with flexible mic positions, multiple models and more. R-MIX SONAR is exclusive to the Producer edition and gives you a visual representation of your sound, enabling you to use clever filtering to isolate parts of it for a DJ-style effect. A new Console Emulator adds the sound of three legendary consoles to the ProChannel module, and these can be added to any channel or buss for mixing purposes. Last but not least, the new Breverb module brings authentic reverb effects suitable for a range of uses. SONAR’s FX Chains have been updated too, with the addition of new presets.

We’ve touched on what’s new, but there is a stack of stuff that was already in X1 that you still get in X2, including advanced mixing and tracking tools, ACT controller technology, integrated per-track arpeggiators, 64-bit mastering plug-ins and a good deal more. All of this makes SONAR arguably the most complete DAW around in terms of functionality. Areas in which it has fallen short in the past are being addressed, and many of the enhancements to the interface and toolset are – if not unprecedented elsewhere on the market – at least very welcome. There’s a huge amount going on in SONAR and Skylight has made a good job of rationalising it all into a much more usable and understandable package. The new automation, take and Smart Tool enhancements are excellent and the ProChannel console system is a joy to work with. Live performance is possible with the Matrix View, and the plug-in set is as comprehensive as ever.

Given the upgrade price, X2 represents a sensible upgrade from X1 and existing users will appreciate the workflow refinements and enhancements plus the new plug-ins. For new users on the Windows platform, SONAR is an attractive proposition, more so since the old interface was done away with in favour of Skylight. You get a huge amount of bundled content, a DAW that utilises the very latest in CPU and OS technology to provide excellent performance, and more or less all of the tools you’ll need.

Finally, it’s worth noting that the Producer edition may be somewhat overkill for some people, in which case the more entry-level versions are well worth a look.

A solid upgrade to an excellent DAW. Many small changes, but welcome changes nonetheless.

Web: www.cakewalk.com
Here’s video from Cakewalk going through some of the changes with X2: