In the never-ending search for inspiring acoustic samples, Spitfire’s latest library goes slightly alternative, with a calling for the West Coast, from the heart of Europe. 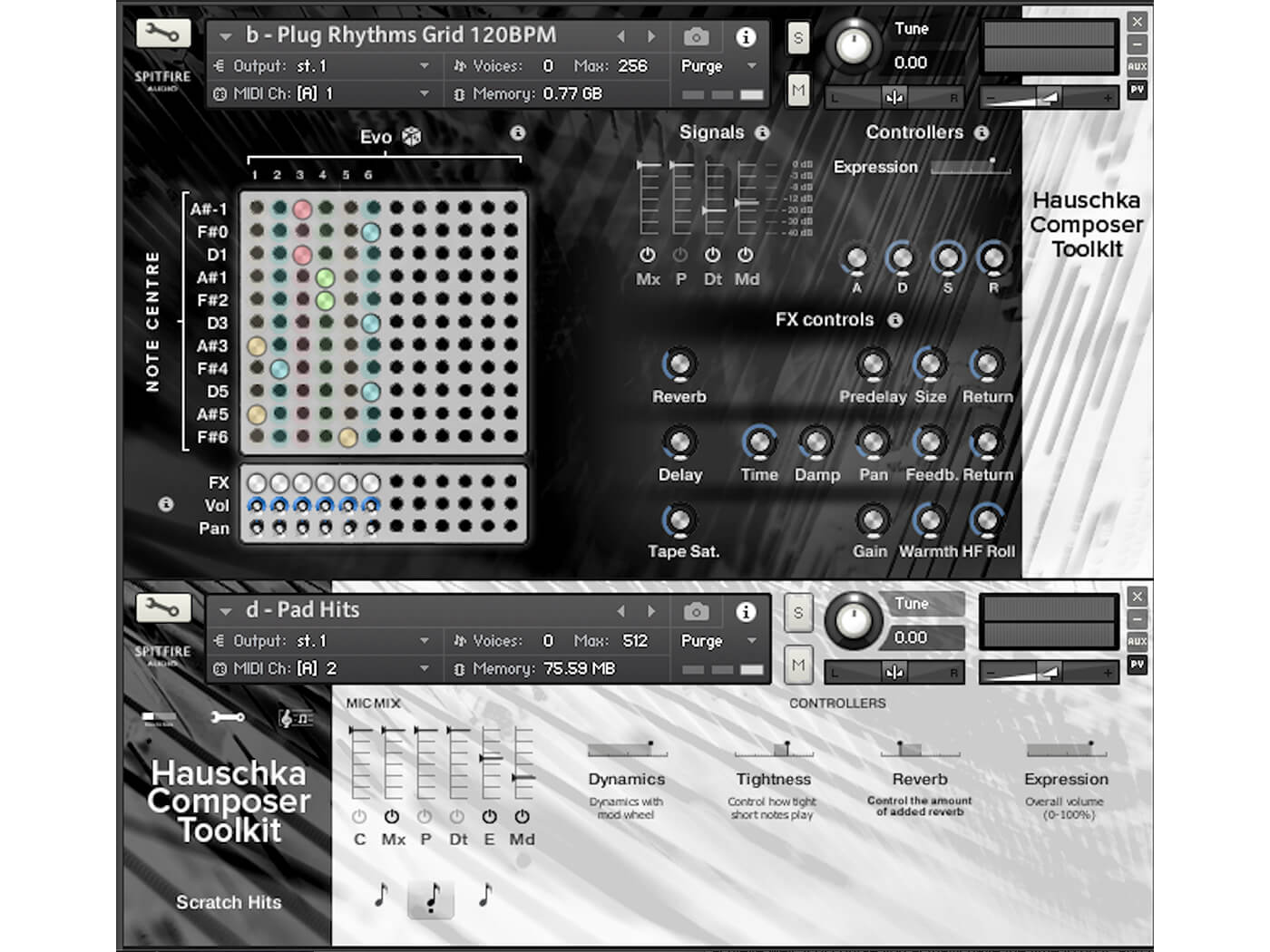 If there’s one thing you can say about Spitfire Audio, it’s that it is incredibly proactive at instilling a sense of community among composers and producers, with a view to the sharing of knowledge. This also extends to its Labs series, which brings a number of excellent and highly inspiring samples to the masses, due to its freebie status. But this collaborative approach also extends to the professional end of the scale, with previous sonic toolkits from composers Samuel Sims and Ólafur Arnalds, and now we have another distinguished palette, from Oscar-nominated composer Volker Bertelmann, aka Hauschka.

Prepared for the big screen

The centre of this library is the piano, but you’ll need to expel any expectations of this being the more usual beautiful grand in an illustrious studio. Sample capture was undertaken at Berlin’s legendary Voxton Studios, using a Steinway grand piano, however the piano was treated to a fair degree of abuse, employing up to forty different piano preparation techniques.

This includes basic concepts, such as the dampening strings, through to the placement of items such as ping-pong balls on top of the strings, so that they rattle and bounce when the piano is played. It can sound quite ‘out there’, which might also explain why its roots as a popular concept extend back to legendary west-coast composer John Cage, however it is a technique which has been exploited in soundtrack composition before, and been deployed by commercial artists such as Richard D. James (Aphex Twin), as heard on his album Drukqs.

The preparations are presented in a familiar Spitfire Kontakt instrument, through six different initial patches, with additional content in the shape of a large set of curated patches. Being keen to hear the most basic raw material, we headed straight to the Pad Hits patch, which offers three key-switchable samples, with a tantalising set of six different mic positions and mixes. 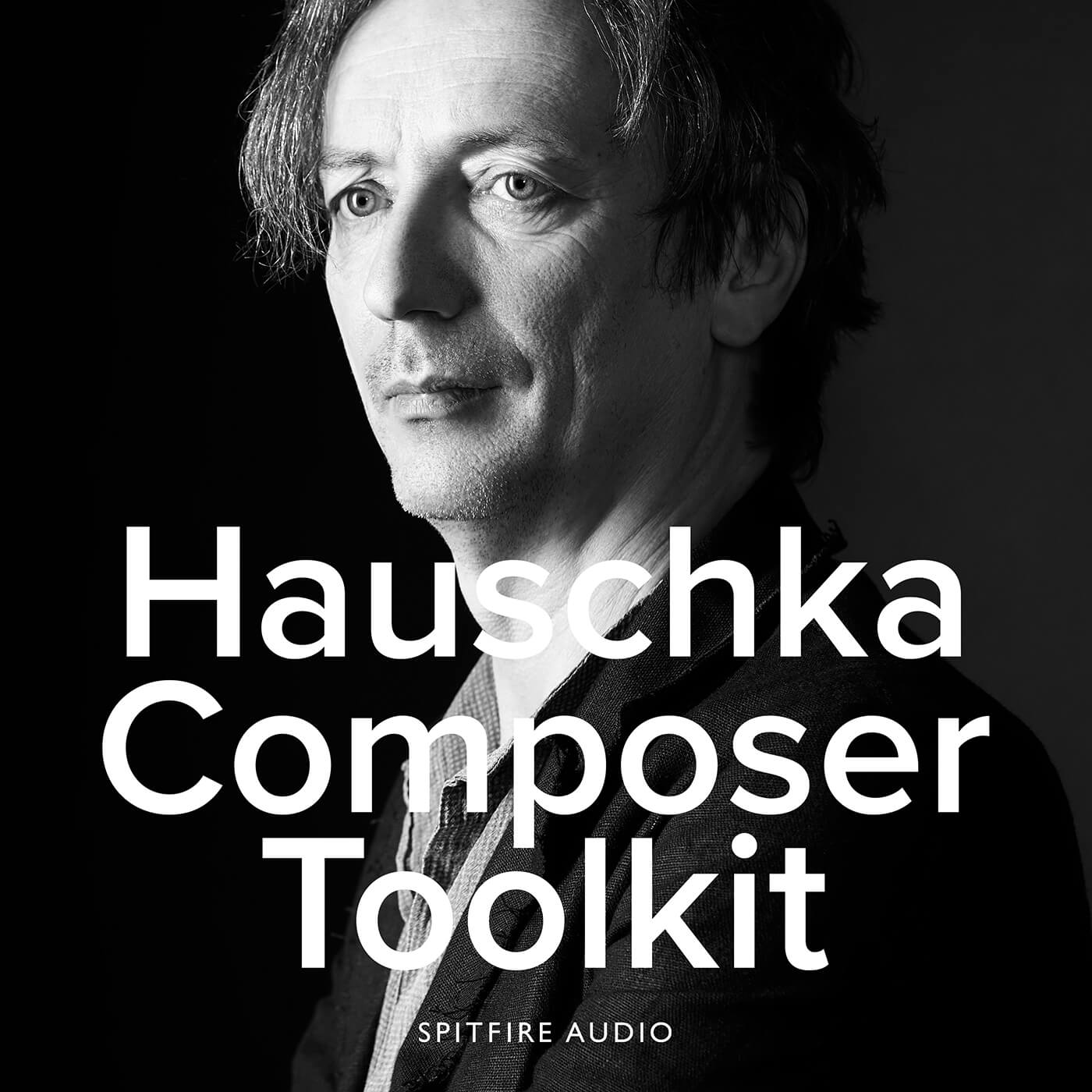 The first sound in this particular patch is a straight forward dampened piano string timbre, which although not entirely unusual offers plenty of dynamic interest when hammering out a pulse. Moreover, thanks to the usual Spitfire control, you can apply the onboard reverb through the use of a MIDI CC based fader, meaning that the reverb immediately becomes part of the instrument, adding a further dimension to an already impressive instrumental colour.

In the same patch, Scratch Hits offers an altogether more discrete colour, which is firmly more impressive in the mid to lower register, thanks to the usual pianistic trait of a piano having coiled strings in this region. The final part of this particular trilogy centres on a tambourine being placed on top of the strings, resonating with each key strike. It has to be said that we find this colour less useable and convincing, largely because there is less sample content located here, so the eagle-eared will hear the pitch of the tambourine alter, as you wander up and down the keyboard, re-centring every perfect 4th or so. In a repeated context, this would not distract too heavily, however it could become more of an issue if used melodically.

The piano is only one part of the play-pen in this scenario though, thanks to the inclusion of a number of different mic and mix settings. The samples have been run through a series of outboard processes, such as a pedal board, modular synth and tape delay. As a basic example, opening up the Echoplex fader immediately conjures up aural images of Jerry Goldsmith’s Planet Of The Apes and Alien scores.

Bringing the reverb into play adds another artistic element, while blending this with the pedal board and modular mix faders can create some truly surreal soundscapes, drawn from that initial piano strike. This really underlies the whole premise of the library; this sort of experimentation and sonic exploration is the sort of thing that composers yearn for, but can be difficult to achieve well, if of course you actually have the time to do it, and that’s where Spitfire really does understand the process. It’s inspiring in its most basic guise, but without all the messy cabling, or requirement for that beautiful acoustic piano.

The return of Evo

A fairly large quotient of this collection sees the return of the much loved Evo Grid, allowing for the deployment of different samples, or more accurately sounds or articulations, across the range of the keyboard. Thankfully, the note register being played lights upon the sensing of a MIDI input, so it’s fairly easy to assign something in the register required.

The grids are assigned to distinct patches, with iterations such as hits, pads and swells, and while it’s incredibly useful to trawl through the offered timbre, assigning as you go, we have always really enjoyed the randomisation feature, which with a roll of the metaphorical dice throws open mutations that you might not have thought of. 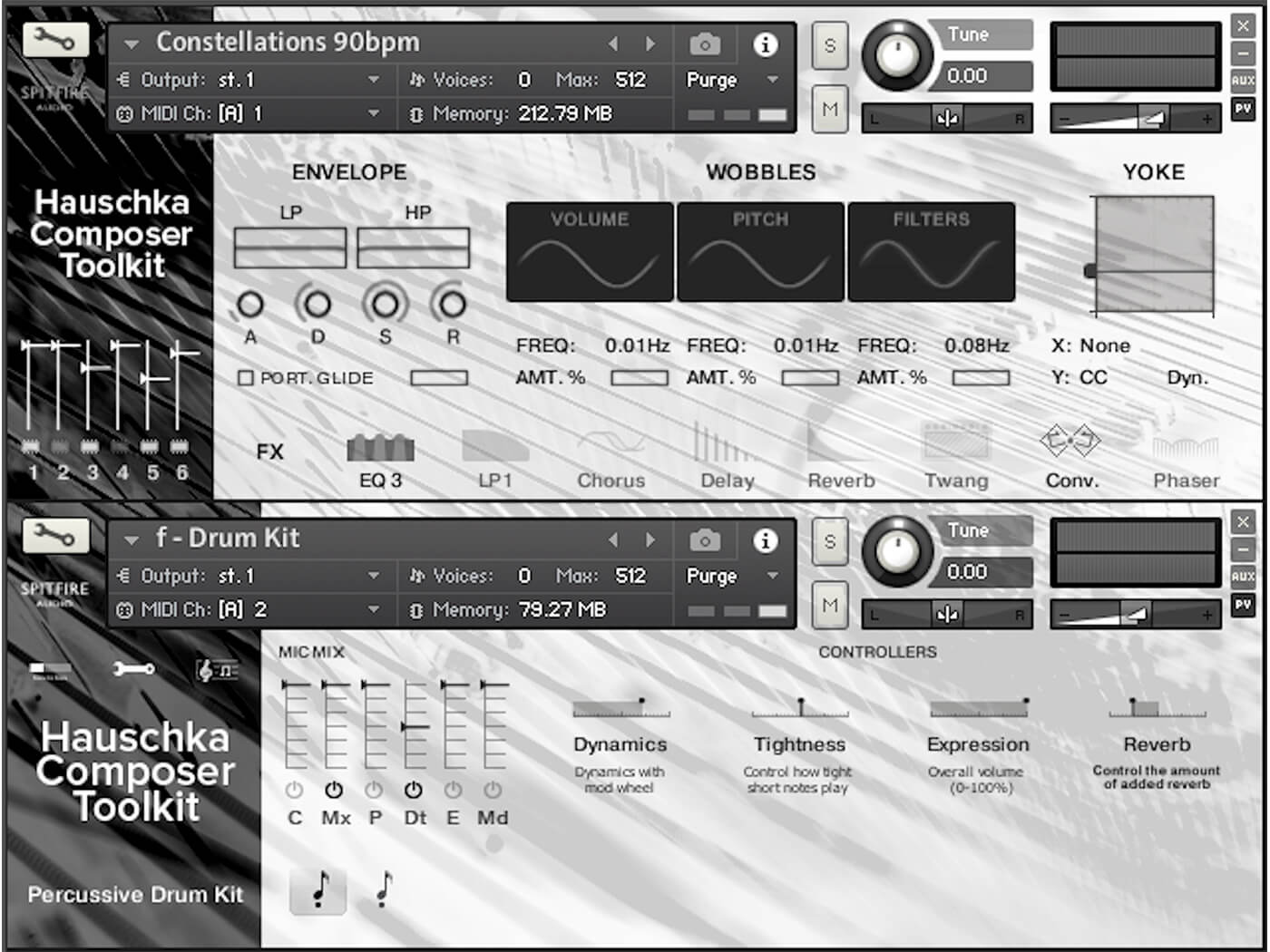 It’s a game of chance, but one that can be hugely rewarding, especially with the incarnation of the rhythmic grid, where Spitfire offers us two tempo-locked examples, at 90 and 120bpm. This appears a tad misleading, thinking that maybe the resulting loops and punctuated rhythmic phrases don’t lock to the DAW, but they do! It’s more about giving an indication of where the initial tempo sits, so that they don’t sound bizarre in the wrong tempo-pocket, unless of course that’s your desired effect.

What’s particularly enjoyable about these grids is the polyrhythmic carnage that can ensue really easily. There is a very human element to all of this, and it will doubtless require a degree of thought when it comes to placement and indeed musicality and accuracy of playing, but the results are effective and spurn all sorts of ideas, when it comes to production treatment.

We think it’s fair to assume that many would be fairly sceptical about a library of prepared piano samples, asking how far can you actually take this concept? Well, the resounding answer is firmly very far indeed! Apart from the more percussive elements which we have largely discussed here, there is an equally impressive contingent of artist curated patches offering some real diversity, from the more ethereal, abstract and pad-like, to really quite aggressive.

These inspire from the get-go, triggering all sorts of memories of impressive bygone scores while allowing for a huge amount of contemplation for future elements of production. As is so often cited, it always helps to start with an impressive timbre, and the rest will effortlessly follow, and that sums up this package beautifully. It will be useful straight out of the box to composers and producers alike, but play it like an instrument, or as a source to further exploration, and you’ll find it hugely rewarding.

As we’ve already established, this is not your more regular piano library, and once you’ve had a chance to get over the abuse that this Steinway may have received during the sample capture sessions, you do have to stand back and applaud the fact that Spitfire have managed to run with the traditional concept of the prepared piano, but integrate many useful and inspiring features, such as the Evo Grid and signal flow, offering far more than just a dry or reverberated signal.

The additional elements could arguably be applied within the DAW, but it won’t quite be the same, although it could suit your purposes better, as many might like to invoke their own level of control. It’s important not to dismiss these elements as a sum of prepared piano parts, while this toolkit is another great addition to their already excellent collaborative lineup.

A true example of a prepared piano, in the more traditional sense, VSLs library examines the concept as pioneered by John Cage. Smaller in size at just 3.0Gb, but could be just as inspirational to use, albeit without the EVO grid and looped content. 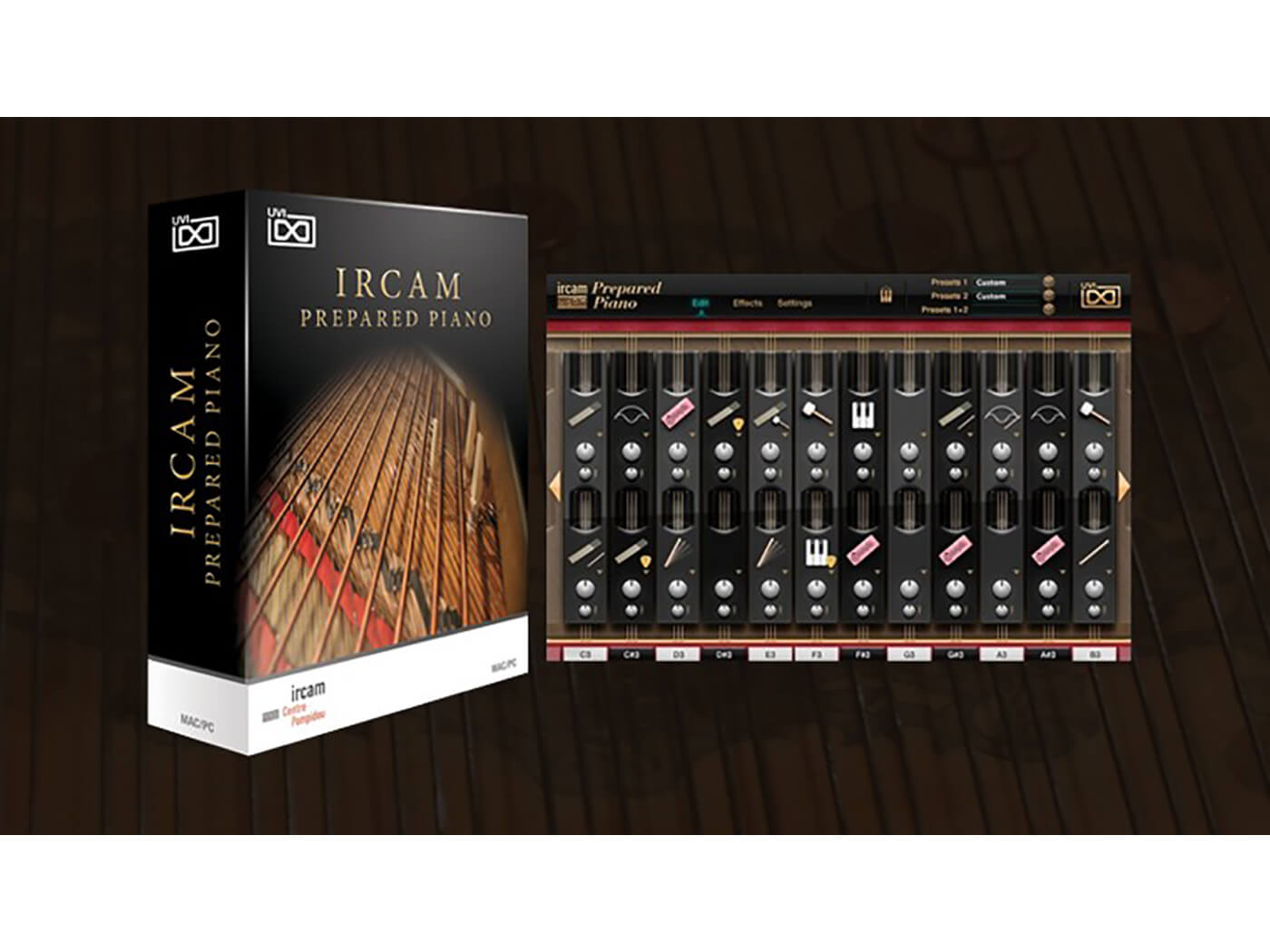 Another fine example of a prepared piano, offering forty-five different treatments, ranging from strikes, plucks, sustains and extended string resonance, thanks to foreign objects. It also carries the weighty kite mark of IRCAM, who are experts in the field of contemporary performance.