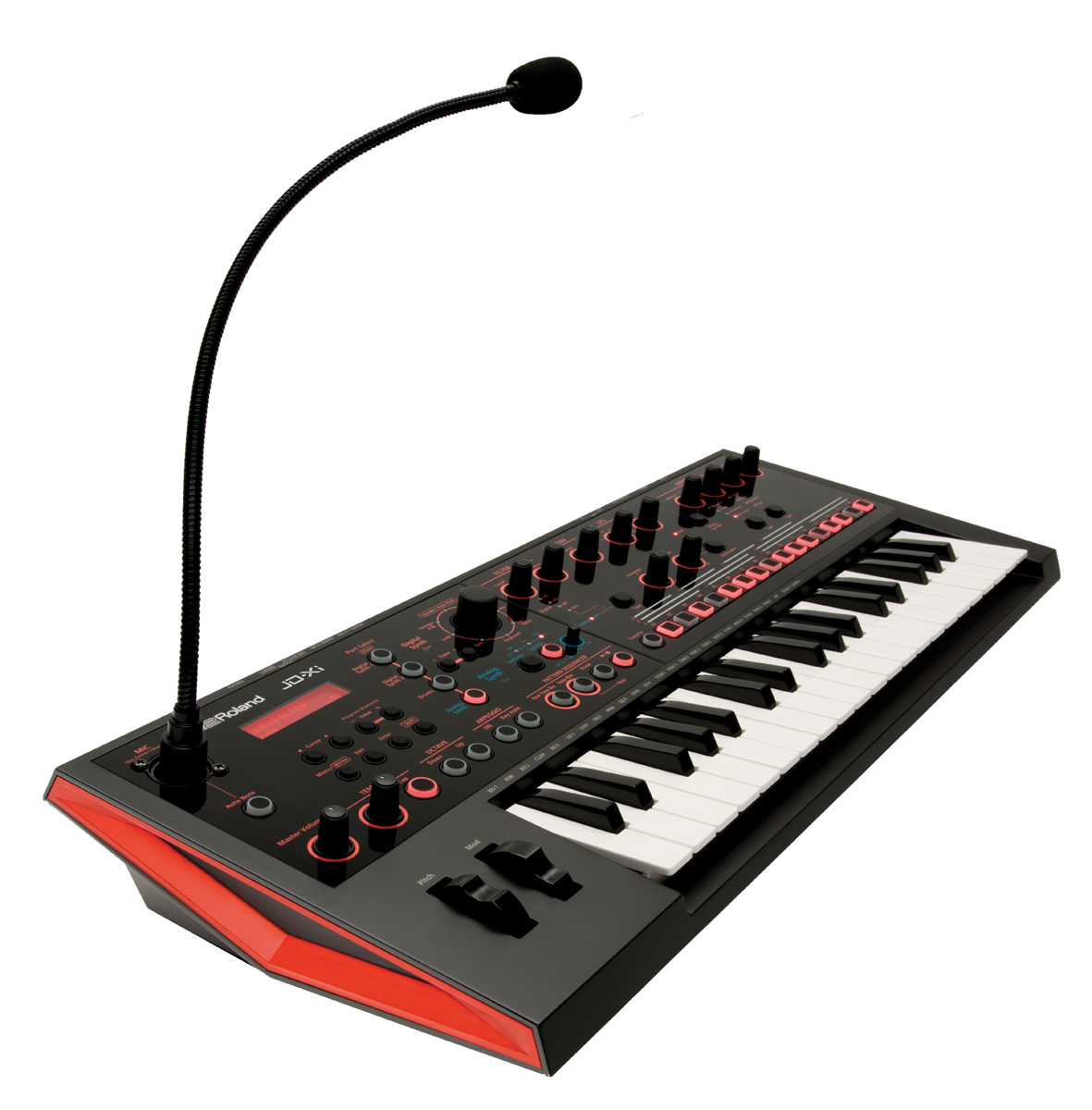 Digital
On to the Digital Synth and there’s plenty to fill 128 notes of polyphony. These are Roland’s SuperNATURAL synth sounds that have been a hit on other keyboards in the company’s range so we’re in safe hands. Particularly pleasing are the string and pad sounds, like a ‘best of’ from Roland’s history (Junos, JPs and D-50 included). The Boreal Pad, Sidechain Pads and Revaluation 1 are standouts but there’s not really a dud among them.

Similarly the leads are cutting and searing when they need to be. There’s perhaps less here for current producers and more for traditional, but as with all the digital sounds you can use the synth section on the JD-Xi’s front panel to affect them so it’s easy to introduce a bit of LFO for some modern wobble.

Inevitably some of the bass sounds are going to tread similar ground to some of the analogue ones I’ve covered, but the digital ones are cleaner if a fraction more polite. But across both sets, all basses (hmm…) are covered. Favourites include the ResoSawSynBs preset which throws every kind of bass in there; Monster Bass 2 which is pretty much what it says; 5th Stac Bs which uses the keyboard velocity well; and TB Bass 2 which has some great effects on it and a wonderful distortion when you push the Cutoff control.

The JD-Xi’s mini keys won’t appeal to players, but there’s a good range of keyboard sounds to appreciate if your fingers are small enough to play. Sound effects are there too but I thought Brass sounds had been banned from synths!

Around the back of the JD-Xi you have MIDI In and Out, Audio/Midi Interface via USB (with ASIO driver availability), headphone and stereo outs. The Line/Hi-z input lets you plug external signals into the keyboard so you can then use the on-board’s synth controls on that signal, effectively making the synth a great big effects box for your guitar or other instrument…

Finally the Seq section is very good too. Combine these sounds with the arpeggiator (a simple to use feature with tap or user-defined tempo, up/down patterns and key hold) and you can spend hours creating patterns and applying the synth section to it. Press key hold and a few notes and you’re away. The Filter and Resonance dials have the obvious effect, but I also like the straightforward Envelope control which increases attack time to effectively turn hard-edged basses into strings and so on. All great fun.

Drums, Effects and Patterns
To complete the fourth of four Parts, there are 32 drum kits on offer. These range from the obvious Roland classics – there are more than enough 808s and 909s to keep everyone happy – to the less obvious CR-78 and 707s.

Contemporary kits include a great EDM set, and kits for genres including house and DnB. In short there’s enough beat action to keep you happy no matter what your style and, if I’m honest, it all seems like a bit of a bonus after all that synth action. Pleasingly, the Synth section can also be applied to beats for further sonic tweaking.

The effects section comes next and is arguably at its most dramatic when applied to the beats just auditioned, as it’s more obvious what impact they have. But importantly the effects can be applied to everything and it’s a very simple operation. Effects 1 and 2 comprise four effects each. The former has Distortion, Fuzz, Compressor and Bit Crusher, while Effect 2 has Flanger, Phaser, Ring Mod and Slicer.

You select one effect from each four for the overall effect and this is chained along with Delay and Reverb effects.

By repeatedly pressing the Effects On/Off button you can alter the chain of effects to have all four, three, two or simply the last one on its own. Like everything on the JD-Xi it’s done with ease of use and instant results in mind rather than subtlety and over complexity (great in my book).

There’s just enough space to look at the Pattern Sequencer. This is a flexible feature that uses the 16-part flashing lights to build patterns. In Step Mode you simply select your part, select your tone, hit the note you want to play and then program which of the 16 parts triggers it by hitting the corresponding button.

In Real Time mode you simply play the notes in – you guessed it – real time, as the Sequencer steps through each part. Do either method to build up big stacks of all four parts together for complete songs. You might want to build your own up quickly, if only to wipe out some of the existing presets, some of which are less than desirable…

Here’s an official demo from Roland

A final feature is the mic input section and supplied mic. Interestingly the vocoder is polyphonic, offering high flexibility and if, like me, you’re not a fan of your own voice and are a fan of Kraftwerk you’ll love it. Again it seems like a bonus after everything else…

Toy Wonder
This has been difficult: it’s taught me a lot about the Roland JD-Xi keyboard and not a little about myself in a “never judge a book by its cover” kind of thing. Perhaps, never judge a synth by its weight? But still this is not the synth for me – my fingers are too big for it – but then, as a 47-year-old Sub 37 lover, perhaps it was never was going to be.

I’d even go as far as to say that the Roland designers seem to have drawn this one out to be the very antithesis of the heavy, wooden-ended analogue synth that players of the 70s and 80s remember. This is analogue for the next generation. Light, easy and cheap.

So this is for the guy starting out who doesn’t have cash burning a hole in his pocket. So while I might be waiting for a bigger version (fingers crossed), I’d ask my 18-year-old self whether he would have gone out and spent sub-£400 (cheap even in the 80s!) on an analogue synth, a digital, a vocoder, effects and drum machine and the answer is: he would have been running down to the dealers before I’d even finished the question. 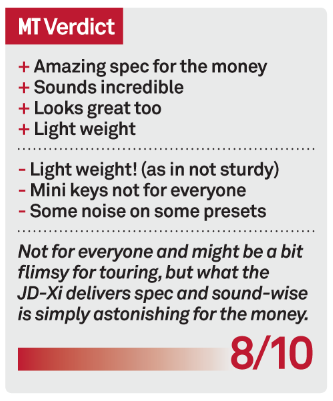