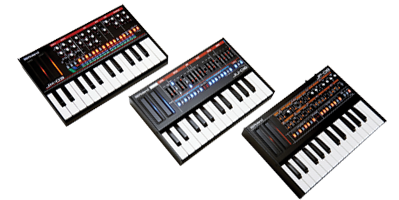 They finally did it. Three classic synths that we’ve all been craving remade for the 21st century – except, knowing Roland, we doubt it’s quite as simple as that. Andy Jones gets his hands on some synths you might not be able to… 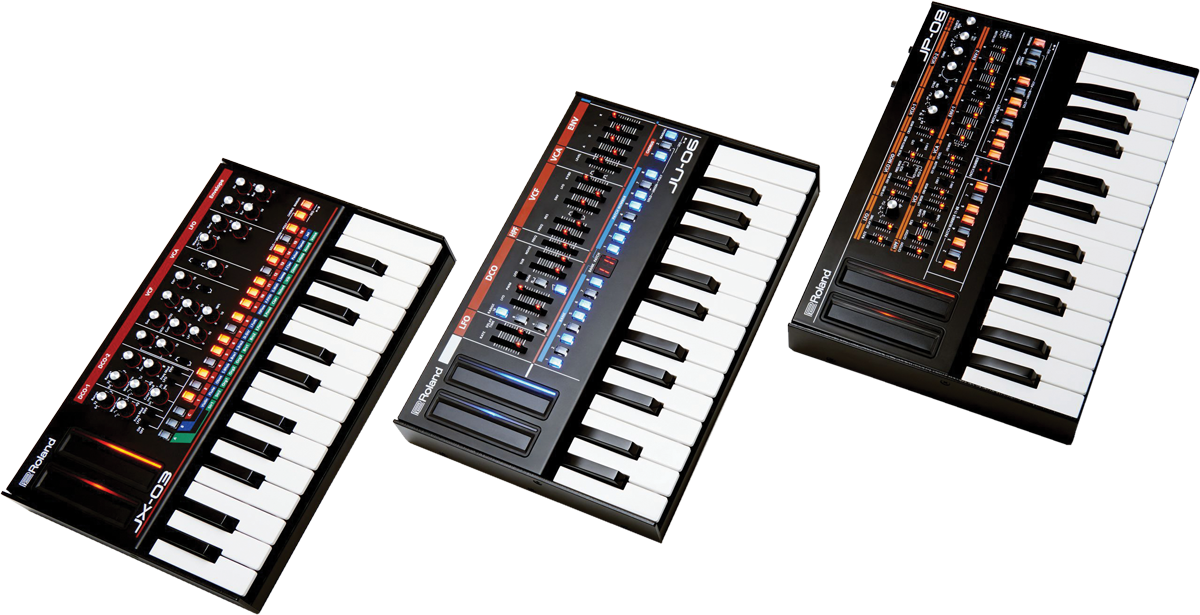 I’m not going on another Roland rant – life is too short and so is my word count for this review. The Boutique range does need explaining, though, so I’ll keep it brief.

Roland made great gear; invented dance music with it (kinda by accident); went digital (just like everyone else); everyone cried; everyone kept saying ‘release the classic stuff again!’; Roland ignored them; then Roland didn’t ignore them; suddenly, we have loads of Roland classic gear in new forms: analogue, digital, and, of course, drum roll… AIRA.

Yes, the new Roland classic gear can take a confusing array of forms: pure analogue (as in the System 500 modular); software ‘plug-outs’ (as in System-1); digital re-imaginings (for want of a better expression with AIRA); and now digital emulation with the Boutique range on test here.

There, I did it – in less than 150 words, I have explained what Roland has been doing for the last 30 years, and the (at least) four new strands of heritage-based synths the company is producing. Why (at least) four? Because Roland has divided itself into competing units and companies, although ‘making up for lost time’ could also be an answer. Either way, who cares? We’re getting what we asked for and we’re getting it in spades.

Simple controls around the back include mini phones, main in and outs plus MIDI. There’s a volume rotary, USB and power

There is a Problem With This

I’m pleased you’ve read the intro and I’m pleased I’ve written it. It’s the neatest and most concise version of Roland events I have managed to put down on paper, but I have to warn you: as pleased as I hope you’re also feeling after reading that intro, you might not want to read any further because the Boutique gear in the picture – and the gear that I am just about to write about – may well have sold out by the time you read this.

A scan around the dealers reveals that you can order it as I write this, but Roland has said that it is limited edition, and that does appear to be true. So if you have already taken the plunge and bought the Boutique, then well done; and if you haven’t, then there might just be a glimmer of hope for you anyway.

When a company announces a limited-edition set of products, it’s usually to test the water or create a bit of excitement – or both. When those products sell out quickly, it would be pretty stupid not to release something along those lines in the future. In this case, then, I’d expect either more of the same or larger versions, which in itself is interesting, as Boutique’s size is both its Achilles heel and its strength.

Either way, though, I’d suggest reading on. Boutique may well have a longer-term future in one form or another. Besides, I’m on a roll as far as the writing is going. What have you got to lose?

Three Classics
So we have three classic Roland synth modules, plus an optional keyboard (the intro pic shows all three with this keyboard attached, by the way).

As I said, these are digital emulations of the real thing and they use the same Analogue Circuit Behaviour (ACB) technology that made the AIRA TR-8 and TB-3 sound so great. But whereas they were re-imagined versions of the Roland classic TR-808 and 909 drum machines and TB-303 bassline, these little fellas are complete digital recreations of classic analogue Roland synths – namely the Jupiter 8, JX-3P and Juno 6 – and called (respectively) the JP-08, JX-03 and JU-06. The optional keyboard I was telling you about is called the K-25m.

Let me say, first up, that these things are tiny – we’ll get that bit out of the way quickly. The benefit is that you can easily fit all three on a desktop and carry them – when the box turned up for review, it was so light that I thought there was only one module inside it.

Shipping-wise, this must help keep the costs down, and when you realise that you can pick them up for anywhere between £229 and £299 you start to forgive that size – this is a fraction of what you will have to pay for the real things second-hand. The negatives are obvious. The keyboard is as tiny and the mini-key hating brigade will be marching to Roland’s UK HQ in Swansea as we speak. Fat-fingered people might struggle with the units, but structure-wise they are all surprisingly solid – certainly a lot beefier than their sizes promise.

Each unit comes with batteries and a speaker, making them super-portable. They are USB-powered, too, so you don’t need the batteries in this scenario. The speakers are a little too small for ‘proper’ work, but loud enough to audition and use away from your studio. They are perhaps not quite up there with those found on Yamaha’s reface range, which these compete with on some levels.

I’ll look at each unit in turn, introducing most of the concepts and feel of each. A lot of these joint features will be covered with the JP-08, which I’ll test first, but I won’t detail the synthesis methods of each synth in too much depth. Suffice to say that the originals sounded great, and each of the new units does replicate the control and synthesis architecture of those. Whether they sound as good, well, we’ll soon find out…

The JP-08
So to the JP-08, a straight-up version of the Jupiter 8 – a synth that has won the hearts of many, including Vince Clarke, Duran Duran and Roxy Music, and one that can command anywhere between £4,000 and £10,000 second-hand. Yes, really. 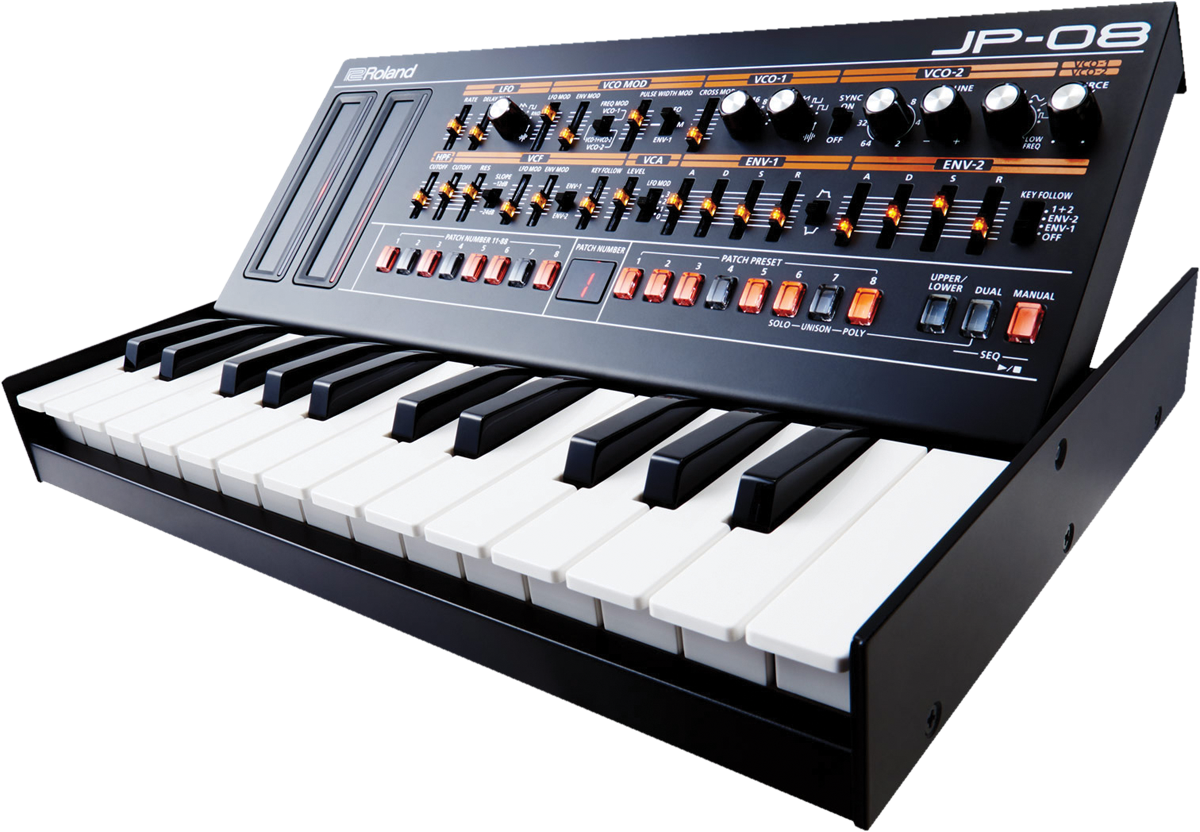 Angle any of the Boutique range within the optional K-25m. You get three positions, but to us this one looked a bit toy-like…

This version has four voices of polyphony, half that of the original and a shame, as the name obviously implies eight. The unit is compact, I hope I’ve made that clear, but on power-up 21 sliders, one screen and two controllers all light up to reveal a lot of hands-on action in such a small space.

That tiny front panel manages to cram 36 of the original synth parameters in to tweak and adjust, and there are 64 presets to enjoy – more on those in a bit. Extras over the original include extra base waveforms and wider VCO range. There are the Unison, Poly and Solo modes that helped make the original so popular – big sounds can be had in Dual mode by way of a button press or two.

This is central to how the sounds operate on the JP-08. In Solo mode, you can select one patch number of the 64 on offer using the left-hand Patch Number buttons. In Dual mode, however, you select a patch number for both upper and lower parts (selecting between the parts using the Lower/Upper button), thus offering big sounds or splits that can be saved as one of eight patch presets.

The lit ribbon controllers are cool, initially set as pitch and modulation controllers, and you can also audition sounds with the left-hand one. I had the unit up and running with Logic in no time (you will need to install a driver) and was triggering notes via MIDI and USB (which doesn’t run to audio), both as Dual combis and single Solo notes.

The unit is tiny, but the controls are surprisingly easy to get your fingers around, thanks to the sliders each having LEDs. Bigger would be better, I’m sure, but I definitely didn’t find ‘small’ holding me back.

Flatten the module like this within the K-25m and we think it looks a little better. You may disagree…

a: Controllers – Both lit with strip LEDs so you can tell what the values are, and also used in conjunction with the sequencer to change values.

b: Architecture – You’ll recognise the synth’s dual oscillator architecture from the original, and while the rotaries and sliders are small, they are very tweakable.

c: Patch Number – Select from your 64 patches in Solo mode or your Upper and Lower patches in Dual mode in combination with the Upper/Lower button.

d: Patch Preset – Locations to store your Dual combinations and Dual mode are selected with the buttons to the right of this section.

e: LED Display – Thank god for this, as it makes everything easier. You’ll use it for pretty much all sound selecting…

f: Size! – This thing is 30cm wide. I said 30cm wide! It’s tiny, but surprisingly usable, thanks to the lights.

There’s a 16-part sequencer that’s pretty easy to use. Simply hit the Dial and Manual keys simultaneously and then press Manual to play. It cycles around the 16 buttons that you use to select patches and patch presets and you light each one to play a note – as you might expect.

There are several patterns built in, which you can edit – change tempo or note keys for example. Without the optional K-25m keyboard added, you use the ribbon controllers to alter values. To change a note’s pitch, for example, hold that note and adjust it using Ribbon Controller 1. I’d have preferred notched dials, to be honest, but you can get by and, of course, if you do use a separate MIDI keyboard it’s somewhat easier.

While I’m discussing the Manual button, you also press this and one of the number buttons to access System Settings, including MIDI channels, Master Tune and the LED display (when it goes into Vegas mode) – all very easy to do.

So to the sounds, and the unit is better than you might think when used with its built-in speaker, but I’d definitely recommend plugging it into your own studio set-up to really get the best out of it. The first couple of banks of Solo sounds are nothing to write home about, if I’m honest – you’ll hear these bare basses and raspy leads on just about every soft synth you own.

However, when you get to the third bank things start hotting up. Here, some of the strings and more pad-like presets move away from the drier start the first two banks offered.

More effects here would help – on top of the delay that you get – but surprisingly it’s the small size that comes to the rescue. With it being so darn small you are never more than a finger-length of a tweak away. In short, it’s easier to make sonic changes as it’s so small, really it is; and since just about every nudge yields something interesting you find yourself synthesising more than you would on a larger piece of hardware, and certainly anything in software – that has to be a good thing, right?

There’s no getting away from it, though: Dual mode is where the JP-08 excels. Here, you just take everything and double it, and suddenly the unit goes from ‘maybe’ to ‘definitely’, and you start to understand why those Jupiter 8 owners you’ve always been so jealous of were so smug with you – this thing can sound massive. Combine that with the easy reach synthesis that I mentioned a paragraph ago and this is one hell of
a sound from a one-foot-long module. 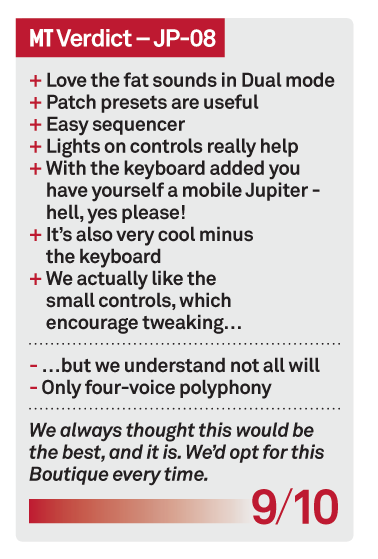