Roland reinvents its past for the ‘patch generation’. Dave Gale reaches for his cables to find out how it racks up… Details Kit Aira System-1m (v1.2) Manufacturer Roland Price £439 (street price) Plug-Outs emulations sold separately – prices vary Contact +44 (0)1792 702701 E: via website Web: www.roland.co.uk The Aira range from Roland has created quite […] 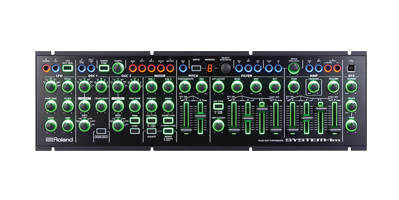 Roland reinvents its past for the ‘patch generation’. Dave Gale reaches for his cables to find out how it racks up…

The Aira range from Roland has created quite a buzz over the last couple of years, as Roland finally took the step that so many of us had been crying out for, with the reinvention of some of the classics from the company’s back catalogue.

Apart from the expected culprits, in the shape of reimagined 808s, 909s and 303s, the flagship of the range was the System-1, complete with shallow keyboard, which many felt did not do the instrument justice. So Roland has taken the brave step of producing a rackmount, or even Eurorack-mount, version of the same instrument, complete with an enticing array of patch points, to excite the burgeoning Eurorack community.

Rack it up or Standalone
Realising that not all purchasers of this module might have Euroracks, Roland has taken the very sensible precaution of offering a number of options. Firstly, it’s wedge-shaped, so will happily sit on a desk, and can be powered by the included DC power supply, or you can fit the included rack ears and place it in a 3U 19-inch rack space.

It conforms to the Eurorack format, and Roland has included a Eurorack power cable so you can power it from your distribution board. Bear in mind you might choose to just place it in the Eurorack and run it from the DC power supply, as the consumption is quite high at 700ma, and being 84 HP, it could take up an entire row of your Eurorack system!

On first power up, you’re confronted by the illumination of the backlit green display. The backlight is more than just aesthetic, though, as it allows faders to light and dim once you enter the emulation mode, which Roland calls ‘Plug-Out’ mode (see later). It’s one thing using the 1m in broad daylight, but I found myself squinting to see the legend of the pots and faders in a darker light, so the inclusion of some form of dimming control would have been welcome.

Aside from this the more important factor is the sound. Having plugged the 1m into my Eurorack, I hooked up a 16-note step sequencer and I was away in a matter of seconds, thanks to the usual Roland form factor and layout. Armed with two oscillators, plus a sub-oscillator and white noise, the fundamental tone palette of the inbuilt synth is anything but basic.

Apart from the usual clutch of waveforms, Roland has added some new tones with the latest firmware upgrade (v1.2), such as FM, Sync and even Vowel, reminding me of other Eurorack oscillators which have this capacity. These additional waveforms are accessible via an additional keypress, which – although not obvious – will doubtless be easily remembered, if used regularly.

There’s no doubt that the Oscillator section has much to offer, both in terms of raw waves, and tonal possibilities, and the Colour control introduces all sorts of overtones, depending on the original choice of waveform.

The modulation sources are extensive within the single unit, however, there are also minijack outputs on the Oscillator section for both of the primary oscillators, and a summed mix output, delivering a clean output pre-filter, to send in the direction of the rest of your Eurorack system. 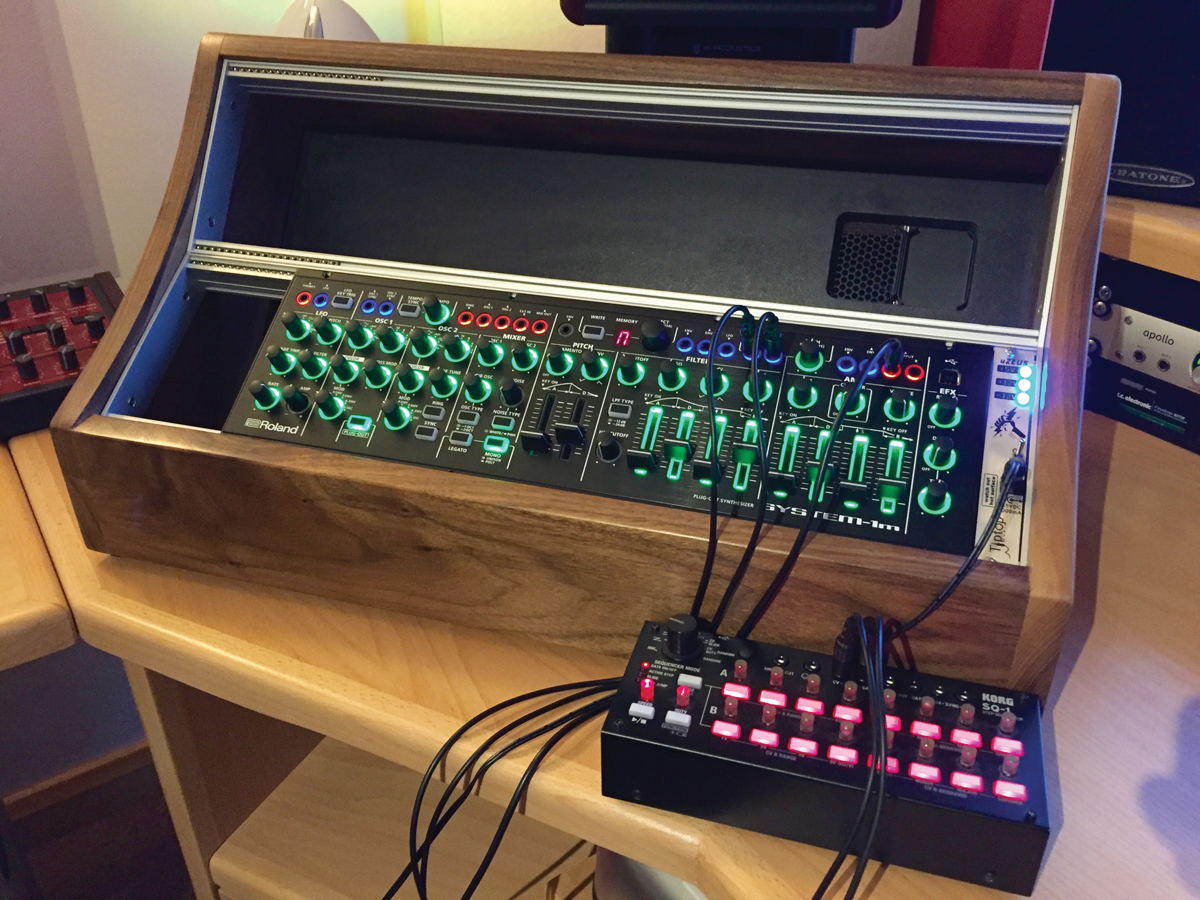 Clean Filtering
It has to be said that I’ve often found Roland digital filters to be a tad harsh and whistly, and certainly, I could say the same about the inbuilt filter here, if pushed too hard in the resonance department.

However, this is doing the filter a grave disservice. With a lower resonance setting, the filter sounds incredibly useable – so much so, I was keen to make a direct comparison, so I took a clean out from the oscillators to a respected Curtis filter in my Eurorack, and to my astonishment, found the results to be very similar sonically. What was even more interesting was flicking the unit over to its Plug-Out operation.

The swiftly loaded SH-101 kicked into life to find my manual patch changing radically. And with it, so did the filter: there was no hint of the Roland filters I’ve heard in recent years, replaced by a glorious facsimile of the 101.

Elsewhere, the 1m is no slouch, offering two dedicated envelopes assigned to filter and amplifier duties. Having the addition of a high-pass filter, to accompany the switchable 12/24dB low-pass filter, will appeal to many. There is also a smattering of very useable effects, ranging from reverb and delay, to a Crusher distortion in the amplifier section. All very welcome, especially if you’re intending to take the unit out for any kind of live duty.

Alternatives
There is something of a renaissance happening presently, with many companies offering single-voice units, which can be slotted into a Eurorack. The most obvious one to mention is the Moog Mother-32 , which also has the added bonus of an onboard sequencer, but only offers a single oscillator.

Similarly, Pittsburgh Modular has just announced its ‘Lifeforms’ Synth Voice, and also Studio Electronics has announced its ‘Tonestar’, both of which offer an all-analogue signal path and mono Synth Voice in a single unit. None of these units can compete with the Roland on versatility, thanks to the Plug-Outs, but if you want a full-on analogue unit, the Moog, Pittsburgh and SE units are the ones to check out.

Do You Really Need This?
If you’re looking for a strong single Synth Voice to use as a standalone unit, with a view to making tentative steps into Eurorack, this is a great synth to start with.

You get an awful lot for your money, but I firmly believe that Eurorack is about experimentation and connectivity, and on this level I am less convinced of the virtues on the 1m, especially as the market has started to become so competitive, with other single Synth Voices at the same price point. 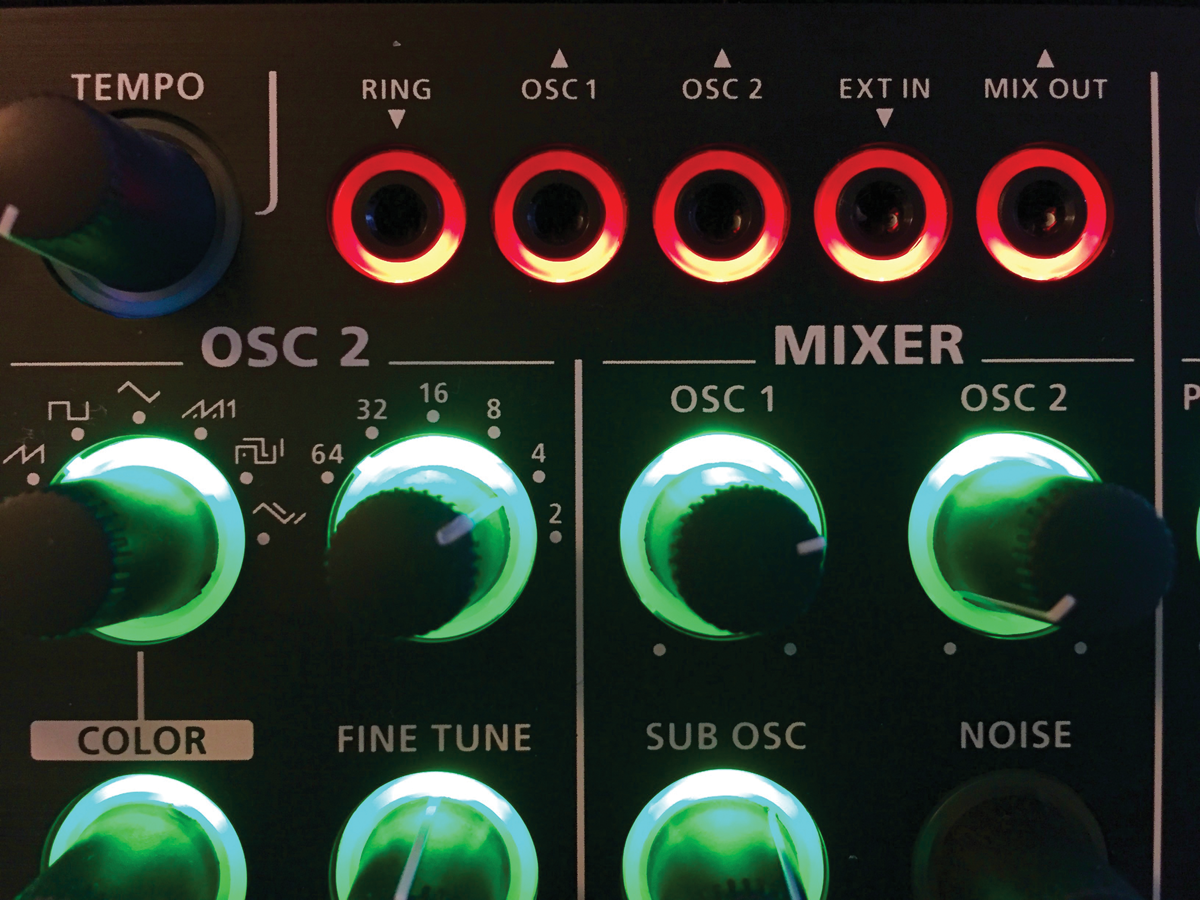 Patch Points
One aspect of the 1m that sets it apart from other digital synths of this kind is the array of patch points adorning the top of the unit. Any Eurorack user will immediately be drawn to this, as you will want to interface the 1m with the rest of your modular. Audio-based signals have minijack sockets that glow red, and CV/Trigger based signals glow blue.

Certainly, some of the patch points are pretty obvious, such as the oscillator and mix outputs, but thanks to the limited fascia space, and continued development of the OS, some of the CV inputs are not what you might call obvious, and you could find yourself reaching for the manual.

One detail which initially had me headscratching was the use of arrows to indicate whether a signal was an input or output. I’m not sure why Roland couldn’t have just written ‘In’ or ‘Out’, rather than the block-design arrow, which would make the connection far more obvious. The cons for this are very much against what you might regard as the Eurorack way, where most modules offer dedicated I/Os with descriptions to help; but on the flipside, you do get a lot more functionality for your money.

Like all things modular, once you find a function on a module you like, you’ll hopefully remember how to recall it, and it will be obvious to you, as you use it more and more. Once over this stumbling block, and with the manual to hand, there’s no doubt that the functionality of the patchbay is helpful, but I found myself more likely to return to my other Eurorack modules, using the Roland as a single voice, rather than tapping into the Ins and Outs that are available. This should be viewed as a positive, as the form factor is so complete, it is essentially a classic Roland Synth Voice, and has definite strengths within its form factor.

Plug Ins and Plug Outs
Everything we have discussed so far links directly to the System-1m, within its default mode of operation, but the place where it really starts to shine is with the use of the Plug-Out technology.

Right from the outset, Roland has sold this unit with the offer of additional software emulations, available for purchase at a special price, utilising its ACB (Advanced Circuit Behaviour) technology.

This technology offers some rather wonderful emulations of Roland classics, which also then offer a plug-in you can use in your DAW, as well as transferring seamlessly to the 1m, to use in Plug-Out form, with no DAW or computer required. The currently available lineup offers the SH-101, SH-2, Promars MRS-2 and Jupiter 4.

I have been the proud owner of an original SH-101 since the late-80s, and I found the Plug-Out version to be very exacting; in fact, I would go as far as to say that they really were identical. Placing both units against each other, the only discernible difference (at least to my ears) was the square wave, where there seemed to be a very slight discrepancy. But given the age of my 101, which is definitely standing the test of time well, it’s likely the issue has more to do with the square shape modulating over time, which leads me to conclude the 1m’s square is probably more as Roland originally intended!

Turning my attention to some of the other Plug-Outs, I have always had a soft spot for the SH-2. The dual-oscillator architecture, coupled with the distinctive sound of the older Roland oscillators, took me right back to the late-70s. There is a certain gravelly quality to the emulation which sounds pretty identical to the original, or at least to the memory I have ringing in my head. It was hard to resist playing all those bass lines from the early UK synth-pop pioneers.

Apart from the module’s sonic characteristics, there’s the added practical bonus of being able to take your favourite emulation on the road, as the Plug-Out, once loaded into the System-1m, stays there until replaced, meaning you only have to hit the Plug-Out button on the 1m to hear the unit flick over to your chosen emulation.

Conclusion
The flexibility of this synth is extensive, and the Plug-Out technology offers numerous other synths in a single package, which is a huge coup. It won’t be for everyone in the Eurorack community, but it will definitely suit anyone on a budget, or with a smaller Eurorack setup, especially if you the Plug-Out emulations, which really are outstanding, are of interest. 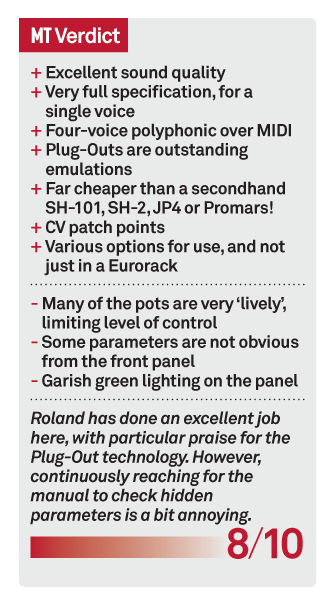