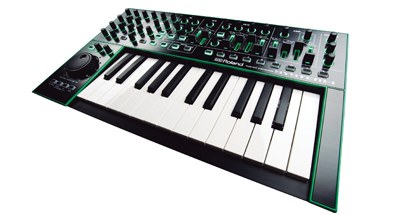 While the world and his wife went mad for the acid side of the Roland Aira range, it might well be System-1 that steals the show. Andy Jones plugs in. And out… 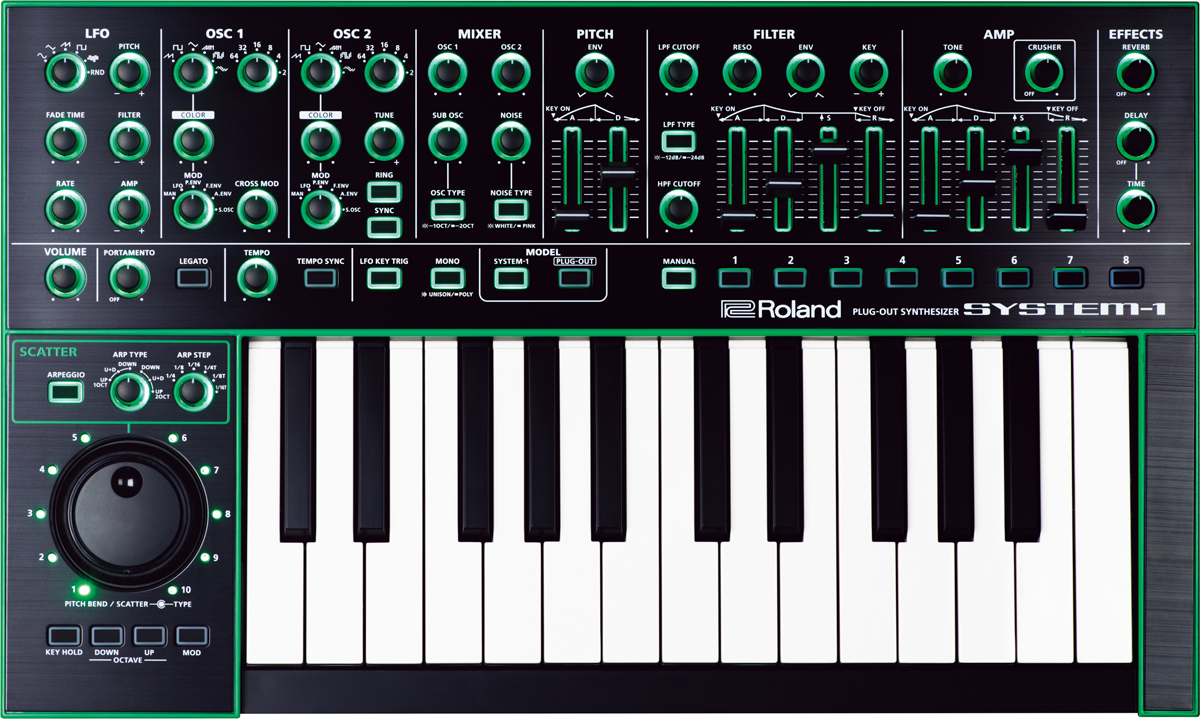 Ah, the heady days of Aira. As fans of music gear and technology I think we’ll all look back on those days at the start of 2014 – days of secrecy, of hype, of mystery – with some fondness. It’s not every day in any industry where you can feel people get genuinely excited by forthcoming products in the same way people did ‘back then’. And to be involved, albeit as helping create the hype, was exciting, to say the least…

To those who don’t have a clue what I’m talking about – Aira what? – where were you between December and February?! We’re talking about a secret range of Roland hardware products that was revealed to music technology journalists as being pretty much what the world had been waiting for in terms of Roland hardware – i.e. reborn TB-303 bass and TR-808 beats machines – and then those journalists were told to keep their traps shut under pain of death until the big unveil date.

What followed was childish excitement, hushed discussion about ‘secret rooms’, and general girlish squealing, giggling and breath-holding in a ‘I know but can’t say anything’ kind of way.

And that was just me… 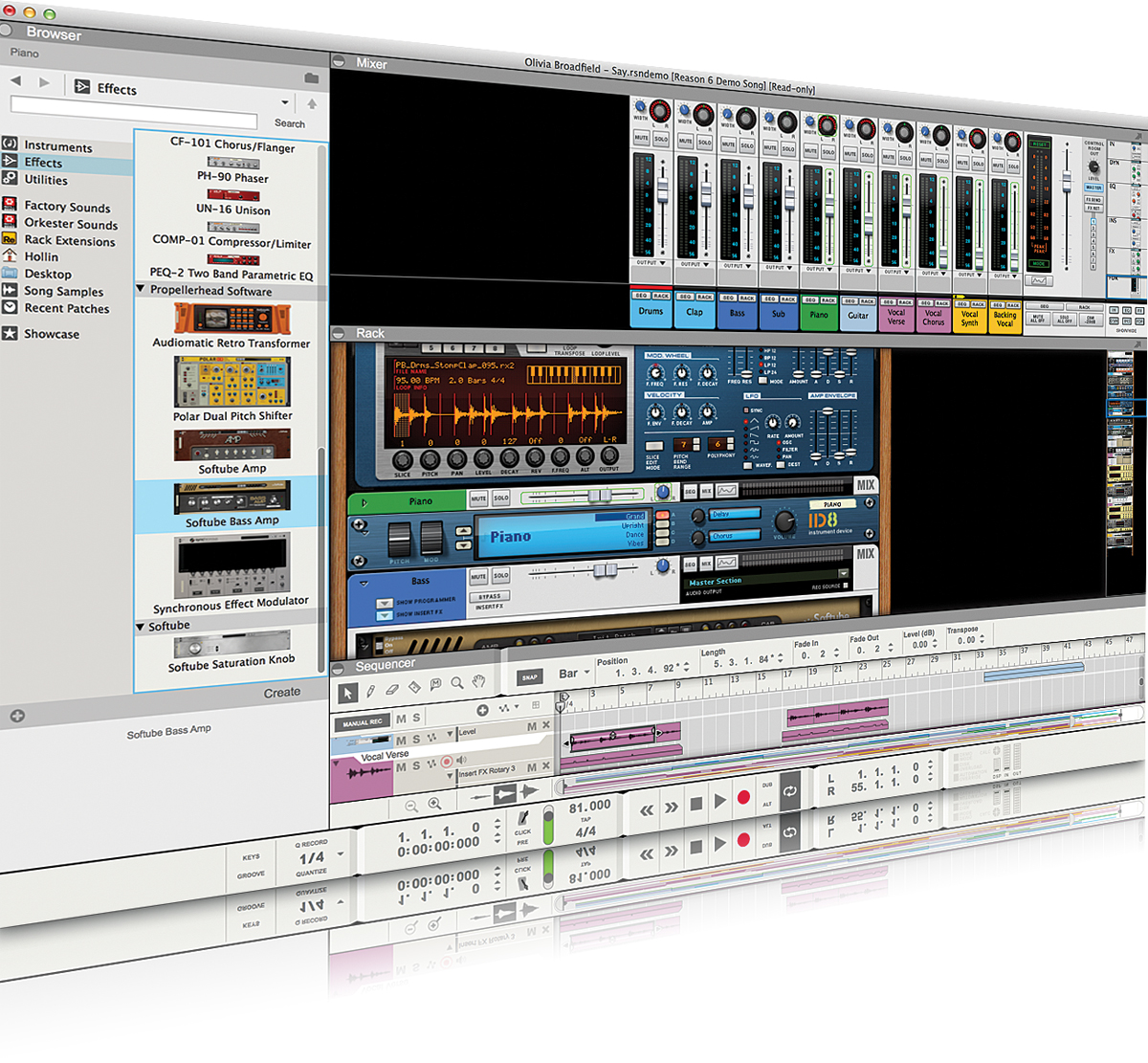 Original adverts for the Roland SH-101 revealed a wide variety of uses for the portable synth. Personally we weren’t fans of the strap-on nature of the synth but the fact you could take it skiing was obviously a massive advantage

And the hype spread. I wrote a story about being one of the first journalists to see Aira – I was just passing the secret hotel room where they were on display – and it attracted more hits at musictech.net than the final review! Roland lapped up every inch of it all, of course. It wanted a range of products to turn the company’s fortunes around and by all accounts it’s done that with the TR-8 and TB-3 garnering great reviews in MusicTech and consequently selling loads.

But while the TB-3 and TR-8 were taking all the acid glory in that ‘secret’ demo room, a small keyboard called System-1 was also unveiled. But at the time everyone wanted to hear the TB-3’s bass and the TR-8’s 808 and 909 beats. Few were that interested in the brightly lit Tron-like synth playing a bit-part left of stage, knocking on the door of the launch party while the 3 and 8 got all the drinks and the girls.

But, in fact, System-1 had me more excited than the TB-3 and TR-8 because it was touted as a synth that could be upgraded via optional ‘Plug Outs’ to turn it into other Roland classic synths, which interestingly can then be used, via the hardware, as virtual instruments within your software DAW. And of these, the System 100 was mentioned, one of many Roland ‘hallowed be thy name’ classics, which surely everyone wants, right? Or is it just me, the person who wanted to be in the Human League before they were famous and didn’t have girls?

Anyway, I digress. Basically System-1 may be the synth knocking and waiting to come in, but when those party goers realize quite how cool it could be, well, it will be surrounded by cocktail-drinking lovelies, laughing at its every punchline. 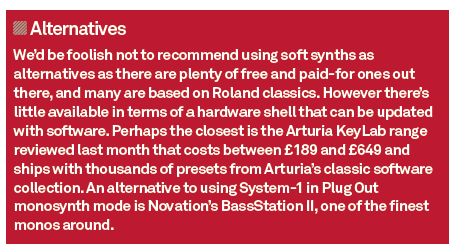 And Here It Is
In use, you have to explain System-1 on three different levels. First up it’s a synth in its own right, with a sound engine, effects and (limited) presets. It comes with standard effects and those Scatter effects that are also present on the TB-3 and TR-8. Next up you’ll use System-1 to control the Plug Out synth as a plug-in within your DAW. Use it this way and it’s just like any software synth with a hardware controller. Roland is shipping System-1 with a free Plug Out which was recently announced as the SH-101. More on this later.

Thirdly, in use, there is Plug Out mode where you simply download sounds from the software SH-101 into the hardware unit. This is very easy: simply click the Plug Out icon, select your sounds and download them. Sadly you can only download eight into the hardware but you can then disconnect it and use the System-1 synth independently of the computer, so play it live, or take it to another studio.

So let’s look at System-1 as a synth in its own right. The keyboard does make its own noises – just not that many of them – and you can do a lot to them. With just eight sounds – yes eight, I couldn’t quite believe it either – it is still a fully-fledged synth, albeit with fewer crumbs to make a meal of from the off.

They’re good sounds, don’t get me wrong. I’ll describe each one. You start with a fierce ‘ai’ vocal sound, all distorted and nasty. Then you get a nice, buzzing
lead followed by a rounded bass. Number 4 is a simple, short-attack, punchy analogue lead; number 5, more a swirling-attitude lead; 6 a proper big bass; 7 an ambient pad and 8 a distorted moving effect. Something for everyone, yes, but only if you know another seven people.

One other negative: I don’t much like the keyboard. It’s a bit spongey, flat and, while I’m no Richard Clayderman, I can see some players having issues. 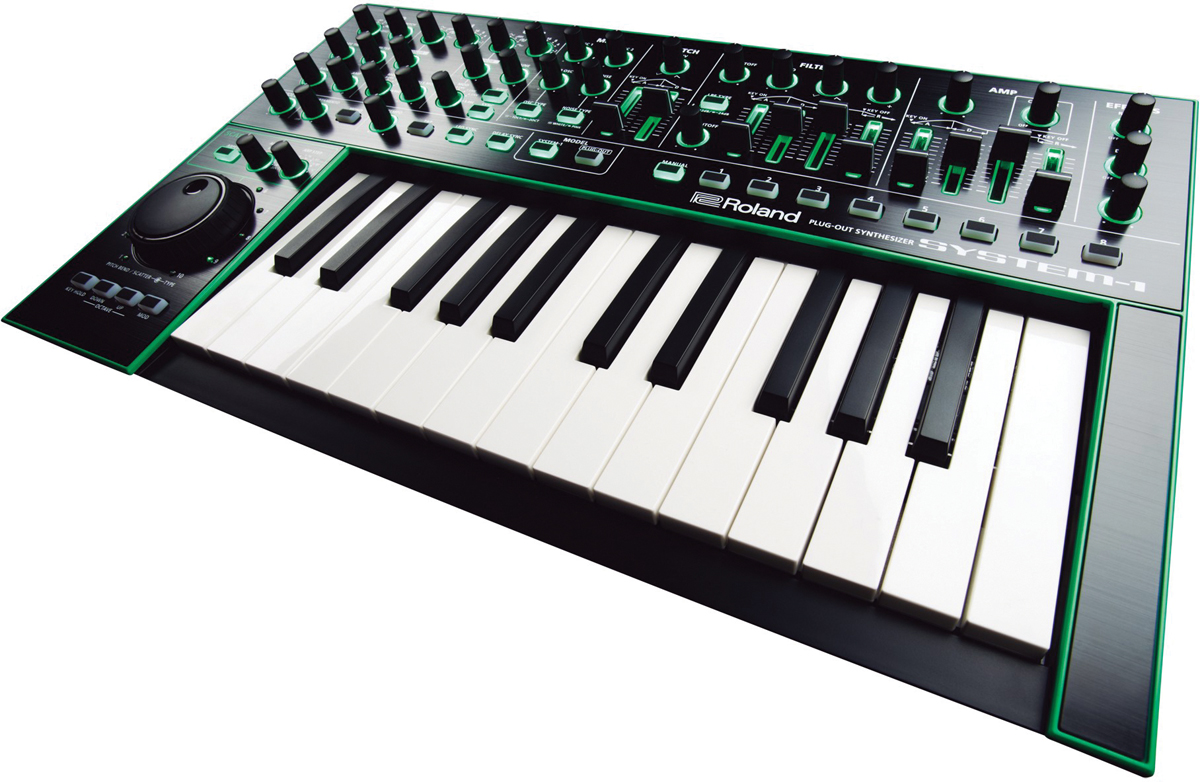 On To The Positives
System-1 lights up nicely, not in a garish ‘look at me’ TR-8 way, just a light green understated way, but with every knob and slider lit. This is an important factor for the Plug Outs as only controls relevant to them will light, which will obviously differ for each synth you ‘Plug Out’.

Next up we have the Scatter effects. This is the same set of cool effects that comes with the TB-3 and TR-8 and is implemented slightly differently as this is a keyboard and not a drum machine or bass producer. Here you still get 10 effects and levels of up to 10 for each, but they are only implemented with the arpeggiator on.

The actual Scatter effect is selected with an inner dial and its level by the rather cool surrounding pitch dial. Effect wise these are better used on shorter bass-like notes. They are not quite as dramatic and in your face as the beat Scatters on the TR-8 but work well if you adjust other parameters simultaneously, like the filter and resonant knobs for more obvious builds and falls (although if, like me, you have only two hands, you’ll need to use the Key Hold button to keep notes playing).

Other notable sonic changes can be made with other, more ‘standard’ effects, which include reverb and delay and a dramatic Crusher and Tone shaper on the Amp stage. Other than that the layout is a fairly standard affair for an analogue synth, with dual oscillators, an LFO, mixer, and filter and amp envelope stages.

The Plug Out
And so to the first plug-out, the SH-101 that ships with System-1. The original hardware synth was released in 1982 and won many a fan with its deep basses and searing leads including Aphex Twin, Thomas Dolby, Jean Michel Jarre and Vince Clarke. It was also released in different colours, which you can emulate in the software here with red, grey or blue options. Usefully you can also select a System-1 option that shows you how the controls are translated to the hardware, i.e. which are and are not used (those not used are greyed out).

Sound-wise I have to say I’m impressed. There’s more effect programmed on the presets than you’ll find on the original but these are easily removed if you want a truer sonic emulation. Basses are very punchy and there’s a great kick drum that could be used as the backbone of any dance track.

Many of the leads are very good as well. Prog Lead 2 and SY Reso Chord are two personal favourites – slightly unstable and buzzy but a sound that will cut through. In fact ‘cutting through’ mixes is what the original became known for and this certainly stands up on that score.

As a software emulation of the original hardware, then, this is really very good and just like the real thing (with a bit of tweaking). Indeed the only thing that it doesn’t emulate from the original unit is the ability to wear it, holding it like a guitar complete with strap. Maybe a strap, handle and battery option is something Roland might consider when System-2 rolls around?!

Future Classics
While we don’t know what future Plug Outs for System-1 will be I’ve heard that they will all be based on monophonic Roland classics. The reason for the monophony is down to System-1’s hardware processor power rather than anything else. Once the power available to run them increases so will the polyphony – just like the old days of synths! Of course all of this is largely irrelevant if you are simply running the Plug Out as a software plug-in, as you can simply stack them together to increase polyphony, but used in Plug Out/hardware mode it does seem the existing hardware will always be monophonic.

So whether we’ll see a larger System-2 keyboard for extra polyphony remains to be seen but we’re certainly looking forward to a Jupiter-8 emulation when the power becomes available. And a JV-1080 while you’re at it, Roland! 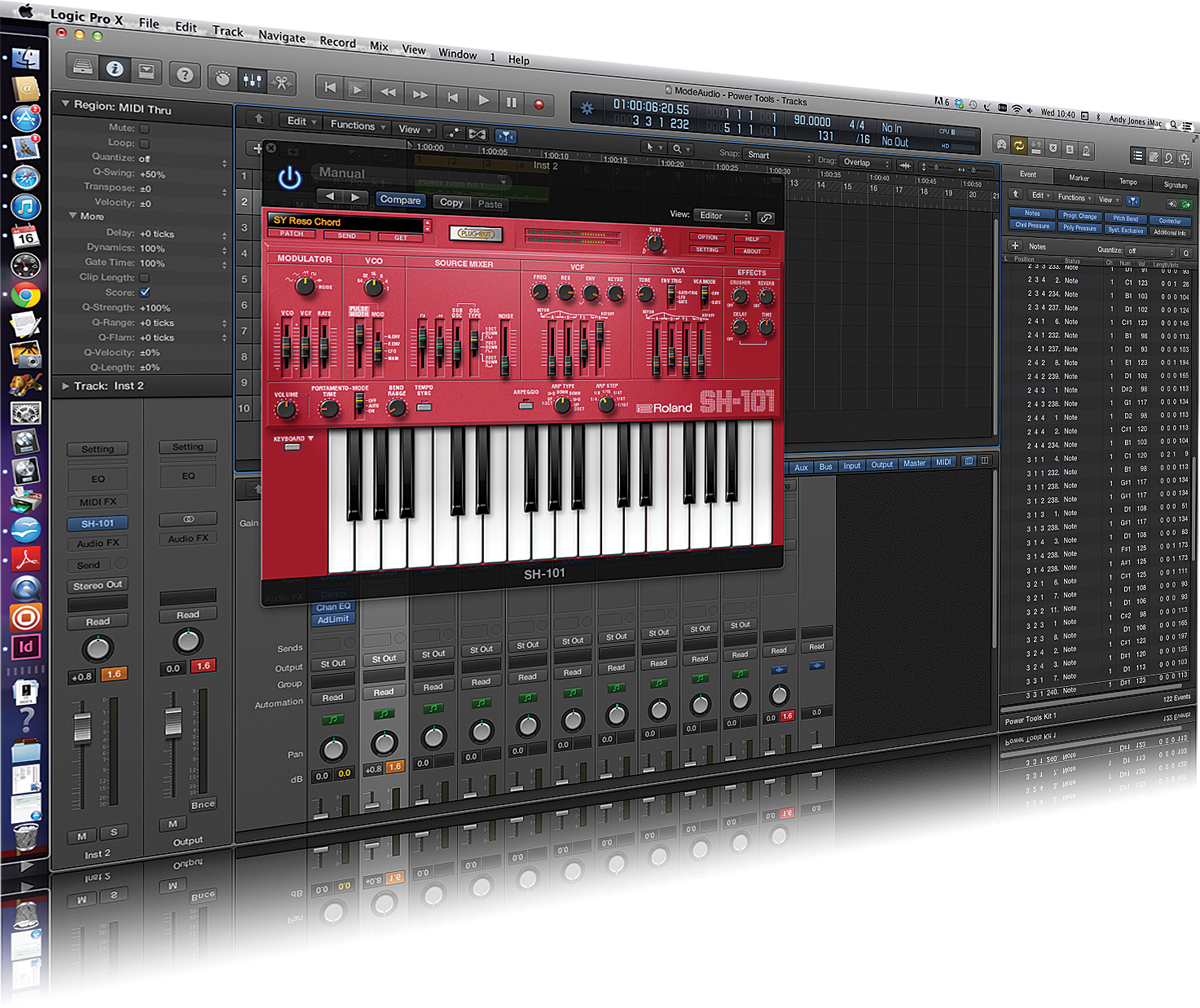 For the more immediate Plug Out future you can safely assume the likes of the SH-2 and System 100 will be among the first releases (the latter presumably with some kind of modular implementation), and they are expected to sell for around £100 each.

So, What Do We Think?
We’ll forgive the spongey keyboard as this isn’t designed for Jamie Cullum, it’s for the EDM guys – triggering will do, playing properly is not needed. I can’t help thinking, though, that having more presets when using it in hardware/plug-out mode would have been great. The ones on offer hint at what System-1’s synth engine is capable of and I’d have loved to hear more dreamy pads à la number 7. It’s not even like I can program more with the engine on offer and add them to the eight supplied as there are only eight locations, so any I do produce will have to overwrite the eight already there!

Of course, this isn’t an issue if you are using the synth as a DAW plug-in as you can use multiple instances, but in Plug Out mode more presets would mean you really are getting two synth engines for the price of one.

The rest of the Aira range has just had significant software updates so I’m hoping we’ll see more presets added in the future. And as it is, for a shade under £500 you are getting a simple synth and a Roland classic plus the flexibility of being able to use it in both DAW plug-in and live Plug Out mode. You’re also getting a base machine that is future-proof and ready to load up more Roland classics as and when they come, so this should be a purchase decision made not only on the system as is but with an eye on future developments as well. 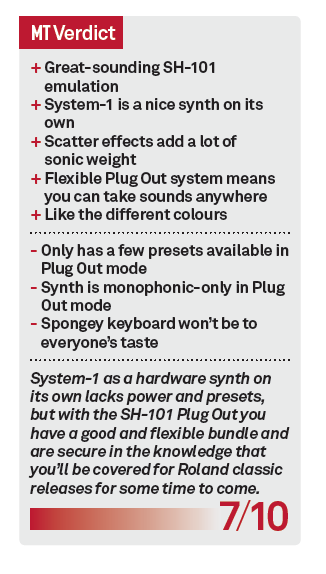 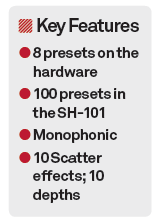