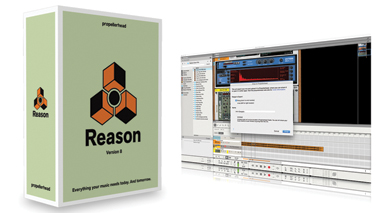 Propellerhead has updated Reason with some new goodies. Hollin Jones gets a sneak peek of Reason 8.3… 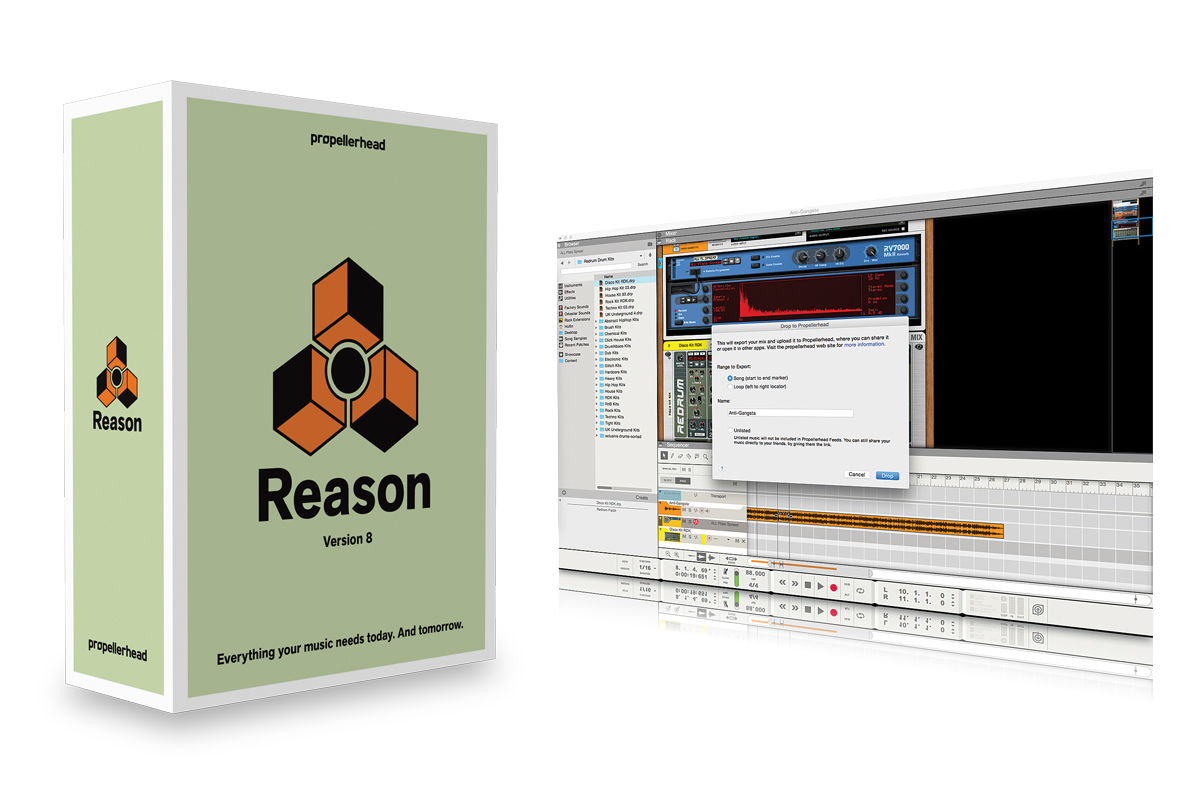 The last few versions of Reason have seen many changes, some big and some small. Audio tracking and editing came a couple of years ago, then Rack Extensions, and finally a flattening of the UI and streamlining of the workflow with a new Browser and drag and drop method of device creation.

Since the release of Reason 8, Propellerhead has been adding smaller features and making modifications with more minor updates : something made easier thanks to its ability to now detect and download program updates without having to include all the library content as well. Version 8.3 continues this trend and we will look at exactly what has changed in a moment, as well as noting what else is new since the original version of Reason 8 was released. 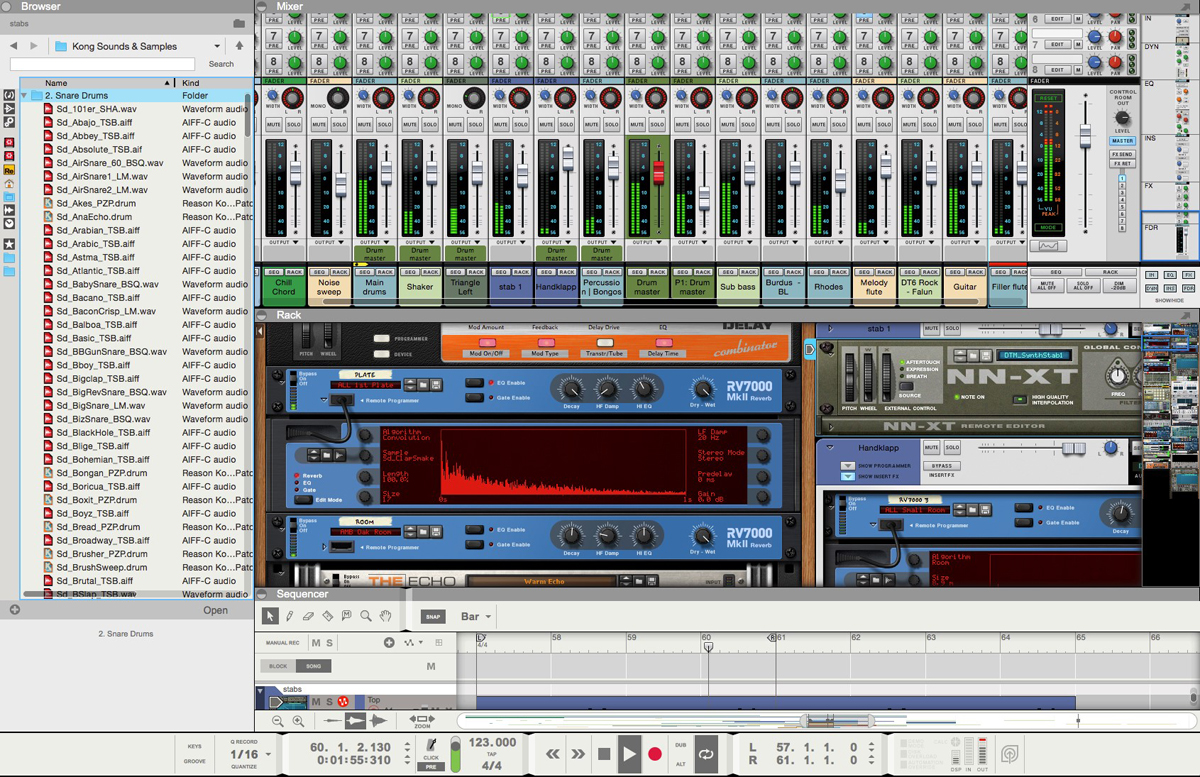 A Recap
Reason is now a fully fledged DAW, though with a somewhat different approach to most of its competitors. It doesn’t have the advanced features of Cubase or Logic like scoring, video support or heavyweight MIDI programming – but it makes up for this by arguably being far more accessible and quick to work with.

That’s not to say it lacks tools however; in fact it has unique features like CV patching, free audio routing, the Combinator and a powerful mixer that many other DAWs would do well to take note of.

The Props also unlocked the world of third party add-ons but did so in their own inimitable fashion. Rather than supporting VST or AU plug-ins, which if poorly coded or out of date can crash an application, they introduced Rack Extensions. These are fully fledged members of the Rack : instruments and effects that are developed independently but work just like Reason’s own modules.

This removed one of users’ biggest gripes, a lack of expandability. More recently, the Props have started creating bundles of Rack Extensions at significant discounts, themed around types of production. The Backline Rig, for example, is a bunch of instruments and effects for people making rock, pop, blues and the like.

As well as some fixes, Reason 8.1 added the new Drop to Propellerhead service into the application. This allows you to start a project on the move using the Figure app to put together some beats and sounds, then send it to the cloud or to another user to open in Take, the Props’ vocal recording mobile app. Both mobile apps are now free.

These ideas can either be sent to Discover, which is a sort of online gallery of musical ideas, or opened in Reason on your computer via the website. Tracks from Reason can be mixed down to the cloud as well, and you can contribute ideas to other peoples’ projects. It’s easy to use though not hugely flexible at the moment, even if it feels like a service that has the potential to become more advanced in the future. 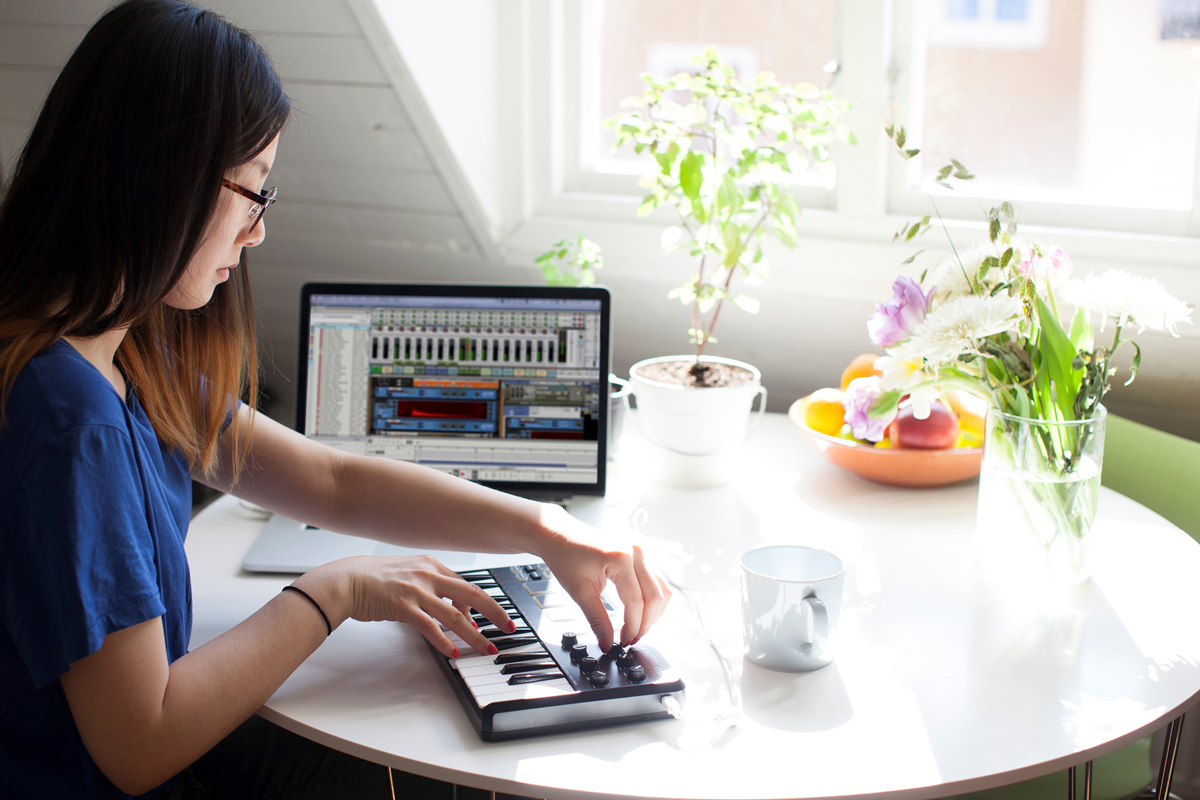 Three’s Company
And so to the 8.3 update, which adds a few more interesting things. The biggest change is the upgrading of the venerable RV7000 reverb unit to mkII.

Although visually the most obvious change is a new, lighter colour, the unit now becomes a convolution reverb, bringing Reason in line with other flagship DAWs, most of which have their own model. Convolution reverb enables you to simulate real spaces by performing complex equations on the sounds you pass through it. In short, it’s far more flexible than just using presets like “hall”, “room” and “cathedral”, though these are still available, of course.

You get several hundred impulse responses in a free ReFill, plus a stack of patches to go along with them. In terms of using the module, the Programmer section now lets you select ‘convolution’ as an algorithm and then select from a sample preset. Even better, it lets you sample in your own impulses or load existing impulse samples using the new buttons on its front panel.

Convolution reverb can be more realistic than other types and is certainly easier to customize. This new model sounds great and brings Reason’s capabilities into line with more heavyweight competitors. Sticking to the same design as the original module means there’s really barely any learning curve in transitioning over to using convolution reverb.

In Use
The RV7000 mkII is now a convolution reverb and lets you load impulse response samples as well as recording your own directly in.

This means it’s possible to simulate a far wider range of physical spaces, including actual physical locations, as long as you have the impulse files.

Workflow Changes
The second change is that the browser is now accessible not just in the main window as before but from the Rack window after it has been detached. Reason’s window management can still be a little fiddly and ideally it’s best to run with two separate windows where you have the screen space. Previously this meant always returning to the main window to browse, but now it’s possible from both windows. Apparently a response to many user requests, this will certainly be useful for a large number of people.

Another workflow niggle that’s persisted in Reason is zooming in the sequencer, which again could be a little fiddly. Zooming from wide to close has meant dragging sliders and if you have to do this a lot, it can get tedious.

Now, the Z key will zoom in to whatever is selected in the sequencer, and pressing Z again zooms back out to a full wide view. This is so useful for editing you’ll question why it’s taken this long to introduce it, but it’s welcome nonetheless. More needs to be done in the area of navigation of the sequencer to make negotiating large projects easier, and it would be nice in future to see a marker system implemented.

The final workflow change is that MIDI can now be assigned from the Rack section. Previously, directing MIDI input to any device meant going to the sequencer and selecting the device’s channel before you could play it live. Instrument modules now get a blue arrow to show they’re selected, and clicking inside this area to change it to a grey arrow denotes that master MIDI input has been directed to the module.

This is also more useful in everyday situations than it might sound, especially if you spend more time in the Rack than the sequencer. Last but not least, when you open an automation clip for editing in Arrange mode, the static value for the parameter is now available in the track list. This means you don’t have to go to Edit mode to adjust it. This is quite a minor change, but if you spend a lot of time working with automation it’s going to be a welcome one.

Alternatives
Reason is quite unique in its design and approach, shunning conventional plug-ins for its own Rack Extension system. FL Studio 12 (€159) is currently PC-only though a Mac version is in development, and although it does do VST, it also has an unusual approach to sequencing and recording.

Cubase Artist 8 is dual platform and a more conventional approach to sequencing. It costs £220 and has a deeper feature set than Reason, though perhaps also a little more of a learning curve.

Free? No Brainer
Given that the 8.3 update is free for registered owners of Reason 8 or Reason Essentials 8, it’s a no-brainer if you fit that description. The workflow changes are welcome, and hopefully the first of a few longstanding interface issues to be tweaked and improved.

Getting a convolution reverb for free is great news too, and helps Reason’s case for being considered at the more pro end of the DAW spectrum. If you’re not yet a Reason user, the program’s strengths are numerous. It’s extremely stable and surprisingly kind to your CPU, friendly and intuitive to use and comes with a bunch of great instruments and effects.

The Propellerhead cloud collaboration system is probably in its infancy but shows great promise, and expandability via Rack Extensions as well as the ever-present ReWire mean it’s possible to go beyond the standard toolset fairly easily. Although Reason 8.3 still shares a few graphical similarities with its very earliest incarnation back at the turn of the millennium, it’s a far more capable and polished program with a wealth of tools for music-makers of all levels.