Reason 6.5 brings Rack Extensions into the mix – but where will they take you? Hollin Jones finds out. 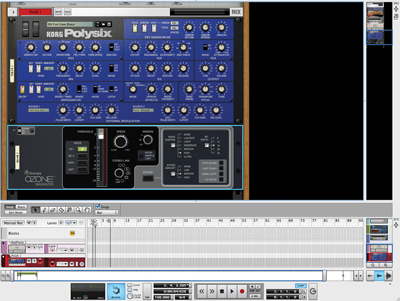 For much of its life, Reason was quite unique in the music technology world. It was a MIDI sequencer that didn’t record audio and didn’t have native support for plug-ins but was nonetheless incredibly popular. Partly this was because it was easy to use, a quality often undervalued by software developers. In recent years, though, it has started increasingly to resemble what we might call the ‘leading’ DAWs.

Not in its look and feel, but in its feature set. With Reason 5 came sampling, and not long after that Reason and Record were rolled into one to form Reason 6, which facilitated multitrack audio recording as well as packing some great new effect modules.

The trend towards becoming a fully featured DAW continues with Reason 6.5 in the form of Rack Extensions –third-party instrument and effect modules that have full access to all of Reason’s features and integrate into your projects. They aren’t plug-ins in the conventional sense, rather they live inside Reason just like its existing modules. So Propellerhead pulls off the task of making Reason expandable while still essentially keeping everything in-house. Before we get too far into this, though, a quick recap on what Reason is, for the uninitiated.

Reason 6.5 is an audio and MIDI recording, editing and production environment for Mac and PC that’s optimised to take advantage of the latest hardware and OS technology. It’s based around a Rack that holds instruments, effects and audio track modules for audio I/O, and a sequencer that houses MIDI and audio tracks as well as any number of note and automation subtracks. All devices feed to a large, fully featured mixer that has advanced EQ, dynamics, insert and send sections, and a master buss with its own buss compressor.

The software comes with a range of synths, samplers and drum machines as well as multiple effects and a couple of great sound banks. Composition is aided by Blocks mode, which enables you to work in a non-linear way, and there are many other time-tested tools such as seamless audio time-stretching and a flexible patching system that lets you connect compatible modules in any configuration you like.

Everything just mentioned was present in Reason 6, but what changes in 6.5 is the addition of Rack Extensions. As Reason has evolved, it has gradually evolved many of the features that users have been requesting, but the issue of modules was always going to be tricky. The Props are great developers, but coming up with loads of new instruments and effects on a regular basis would likely distract them from advancing Reason’s core technology. What the company has done, therefore, is open up the Rack to approved third-party developers, enabling them to create versions of their own products – and some entirely new ones – that can be used inside Reason.

Here’s how Rack Extensions work. A few of Reason’s menus have had minor tweaks and the Create menu now organises modules more accurately by type (in anticipation of people downloading lots of new ones). The Browser has new Rack Extension shortcuts so you can jump to the modules. Everything is tied to your Propellerhead user account, so to try or buy Extensions you have first to log in and head to the new Rack Extensions store. To try a module, simply click on its Try button, which launches the Authorizer app on your computer. You can either authorise online each time or write purchased licenses to your Ignition Key or Balance interface (reviewed in Issue 106, January 2012).

Managing everything online in one place means that you can keep track of updates and licenses very easily. It seems like it will be an attractive proposition for developers, too, offering greater security against piracy than conventional plug-in technology. 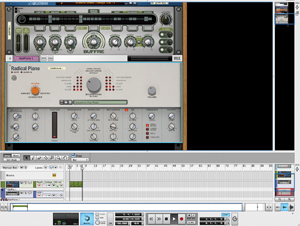 Propellerhead’s Radical Piano has an excellent line in upright and murky pianos, as well as some bright pop models and battered old honky tonks

Once a module is downloaded it behaves like any other in the sense that you can call up as many instances as you like, patch it manually, automate it and generally get creative. The Props have attracted some big names for the launch of Rack Extensions, including Korg, FXpansion, iZotope, Audio Damage, Softube and Sugar Bytes, among others. Prices vary, but at present range from free to around €100, with most falling somewhere in between. Being able to try out fully functional versions for 30 days is great, and the fact that the process is pretty streamlined – there are no disk images or installers – means that you’re more likely to give them a go. Interestingly, each Extension is ‘sandboxed’, meaning that if it should crash or stop working, it doesn’t simultaneously crash Reason, it just stops making sound.

There are only around 20 Extensions at the time of writing but this number will of course grow, probably fairly quickly. We tried out a few Extensions and found them to be generally very good. Propellerhead’s own Radical Piano has an excellent line in upright and murky pianos, as well as some bright pop models and battered old honky tonks. The instrument lets you choose multiple mics and mic positions, set the character of any piano sound, and alter key mechanics and ambience, among other things. Make no mistake: this is nothing like a ReFill loaded into a Combinator, it’s a much more specialised instrument. If the Props keep on releasing instruments this good, Reason could become a much more serious sound-design tool.

Softube’s Saturation Knob is free and adds some nice warmth to any signal; Synapse Audio’s AF-4 filter is a simple but effective Rack filter module. iZotope’s Ozone Maximizer squeezes more gain out of your signal, and the ABL 2 is adept at making squelchy acid basses. Korg’s Polysix accurately re-creates the classic model with which it shares its name, while the Buffre Beat Repeater is just tremendous fun. If you have Reason 6.5, you can try these all out for free for yourself and see how you get on with them.

The Props have said that Rack Extensions mean that tracks produced with Reason are going to sound ‘totally different’ in future, and in this they are almost certainly right. If you have a standard set of tools – as Reason has until now – there will always be a limit to the sounds you can get out of them. With Rack Extensions that limit is removed, and although there are only a few Extensions at the moment, expect to see many more over the coming months. Otherwise, the 6.5 update doesn’t really add much else – we’d still like to see mixer grouping and better audio editing features – but it’s free for Reason 6 users and surely represents the opening of a new chapter in the life of Reason. We look forward to seeing what developers come up with – and so should you…

Support for Extensions is the only major change here, but it’s a big one. Expect to see more Extensions soon, which will make the software even more powerful.