New PMC monitors for less? Surely some mistake. Andy Jones raises an eyebrow at the price, but will he get the results he’s listening for? 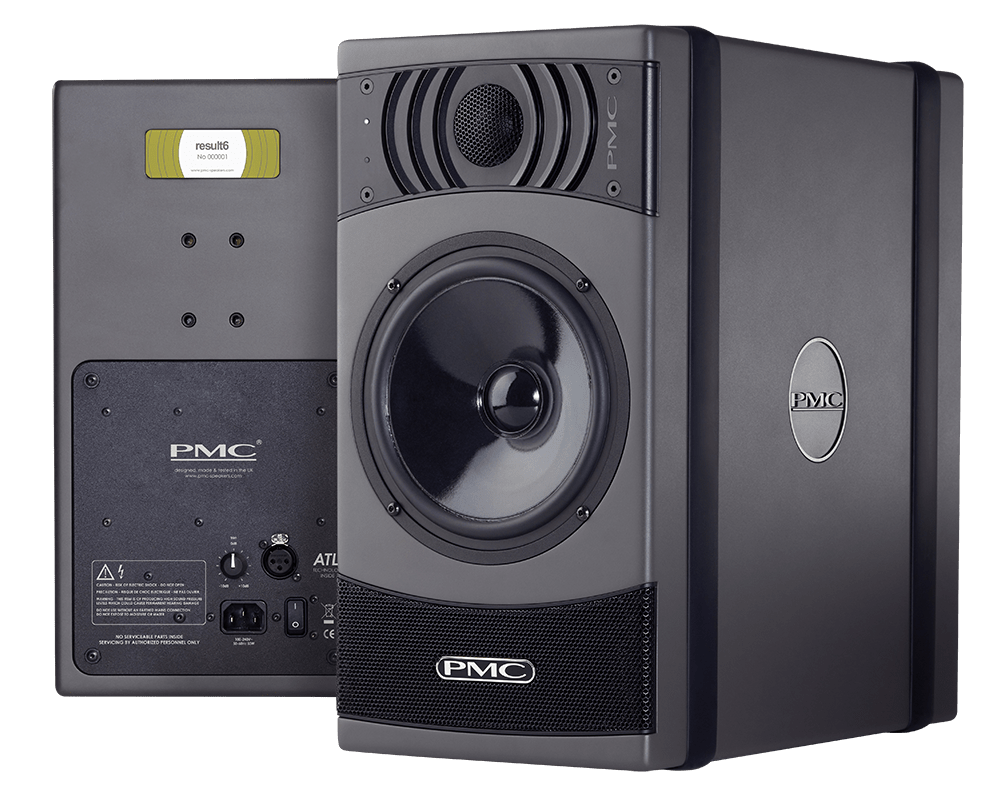 I’ve had some big PMC moments in my life I don’t mind admitting. My first ended up with me owning a set of the company’s twotwo6 monitors for a long while, until there was a forced sale because a new bathroom was required (long story, I’ll spare you the details, but needless to say, it got messy). I’d bought them thanks to a blog I was writing for MusicTech about equipping my studio.

It took place over a long period of time, during which I was auditioning monitors side by side to choose the best and the twotwo6s eventually came out on top. In those days, I rather oddly judged how good monitors were – and music, come to think of it – partly on how they physically affected me. Great music raises the hair on my arms. The PMCs did that – and the hair on my legs, too. It’s an odd reason to buy a set of monitors, but as good as any, I suppose. I was smitten, after all…

My second meeting came by way of Metropolis Studios, when I auditioned a set of PMC QB1-As costing, ooh, around £80k a pop. Yes, each. (I wasn’t auditioning them to buy them, I hasten to add.) I think I noted at the time that great monitors should let you feel like the band is in the recording studio with you. These were so good that it made me feel like I was actually in the band. Extra-or-din-ary.

My third time was a few weeks ago at Miloco Studios (I’m not ‘studio namedropping’, by the way) when I, along with many others, was treated to the UK premier of the company’s new result6 monitors (yes, PMC does have an odd naming convention of no spaces and no capital letters). Even in a crowded studio, one thing struck me: the imaging was extraordinary.

All three occasions left me in no doubt: PMC makes incredible speakers. Only problem – PMC also makes expensive, bathroom-shattering monitors. Apart from occasion number 3, as it turns out…

Those new result6 monitors, you see – and the ones I have on test here – are PMC’s lowest priced monitors ever. At just £2,394 a pair, they come in way below the company’s twotwo range, yet include the technology that has defined the PMC sound for many years. This begins with what the company calls its Advanced Transmission Line design, which is in many of its other monitors.

The theory goes – and this is very clever stuff – that the energy and frequencies that emanate from the back of the bass driver are either absorbed (in the case of unwanted midrange frequencies) or fed along a winding tunnel within each speaker and then out of the front port.

Thanks to the design of the tunnels, these are in-phase with the other frequencies coming out of the speaker, so the port acts rather like an extra bass driver. The result is that you get an extended bass response from a relatively small cabinet and rather less harmonic distortion than you might otherwise end up with.

A greater bass response from a smaller box is what monitor designers seem to be striving for. With Genelec’s The Ones that I reviewed a couple of issues back, for example, a hell of a lot of design (and acronyms!) have gone into getting a huge sound from a small speaker.

Yet in this instance, PMC seems to have done it in a slightly less complex way. And there’s no room correction, DSP-tweaking, or software downloading required, as with The Ones – these are straightforward, two-way monitors that are designed to sound great over a wide area, but for far less cash than PMC customers are used to paying.

While I’m on the subject of the design, I should mention the result6’s D-Fins (or Diffraction Fins) placed around the 27mm soft-dome tweeter. These distinctive features have been especially designed for the result6s and, according to the company, they “block edge reflections, focusing dispersion and further widening the already generous sweet spot PMC products can offer” – hence that incredibly wide arc I picked up on back at Miloco. 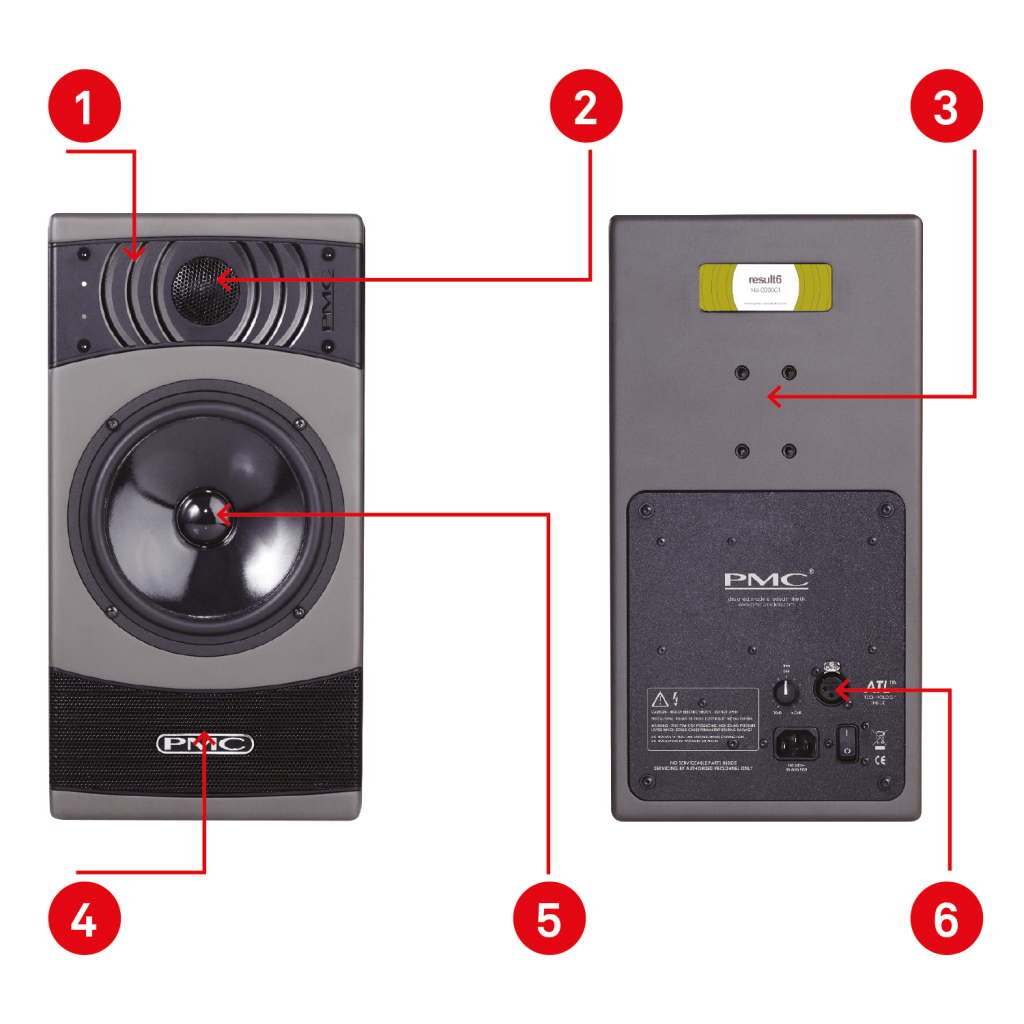 1. D-Fins (Diffraction Fins) These help block dispersion and widen the sweet spot of the result6 monitors, offering a more flexible listening position in your studio. They also look pretty cool, too…

2. Tweeter This soft-dome tweeter offers “ultra-high resolution and a neutral balance” with a “perforated acoustic lens that extends the response beyond 20kHz and controls dispersion, ensuring perfect integration through the crossover region”

3. Around the back… There’s not a huge amount going on around the back, but those of you wishing to mount the monitors on your studio walls will be pleased with these Anchor Points.

4. ATL vent Thanks to the Active Transmission Line design – in many PMC speakers – you get an extended bass response and lower distortion. Unwanted frequencies are absorbed and extra bass frequencies emanate from this port, acting like an extra driver.

5. Midrange/bass driver This 6.5-inch driver has been designed to deliver a response down to 45Hz and control the bass response even at very low output levels – great for monitoring at low volumes.

6. Other rear controls Around the back of the speakers, you get a Trim control with “±10dB of output-level adjustment to suit the precise requirements of your listening environment”, plus a balanced XLR input.

So there you have the technology, and it’s fairly straightforward: an extended bass, low distortion and a wide sweet spot – what we all want from a great studio monitor.

Setting up the monitors couldn’t be simpler, thanks to an excellent manual, full of detailed advice and diagrams on positioning and running in (50 hours is recommended here). It shows the Acoustic Centre of the speakers and how that should line up with the listener, and follows our advice on setting them – and you – up as an equilateral triangle for the best listening position.

The speakers are very well built, quite light given their size and very deep, probably thanks to that Active Transmission Line design. They also look fantastic. I know that shouldn’t be a consideration, but you could be spending a very long time looking at these things when mixing…

So to my listening test, then, and I’ve got in a routine of using my mixes – some I’ve known and worked on for 25-odd years – plus lots of established releases, and to my mind, well-produced classics. Initially, next to my reference monitors, I was completely blown away by the increased sweet spot again.

I’m not suggesting that you can get up and wander around your studio with no difference in what you’re hearing, but neither are you rooted to one listening position, bolt upright and squinting for the best sound. As long as your head is level with that Acoustic Centre, these speakers afford you the luxury of movement.

In terms of their sound, you might find them initially lacking some bottom-end boom, but that running-in time is important, as PMC says: “You will notice the bass tonality becoming fuller, more accurate and neutral, and the bass extension will increase significantly.” 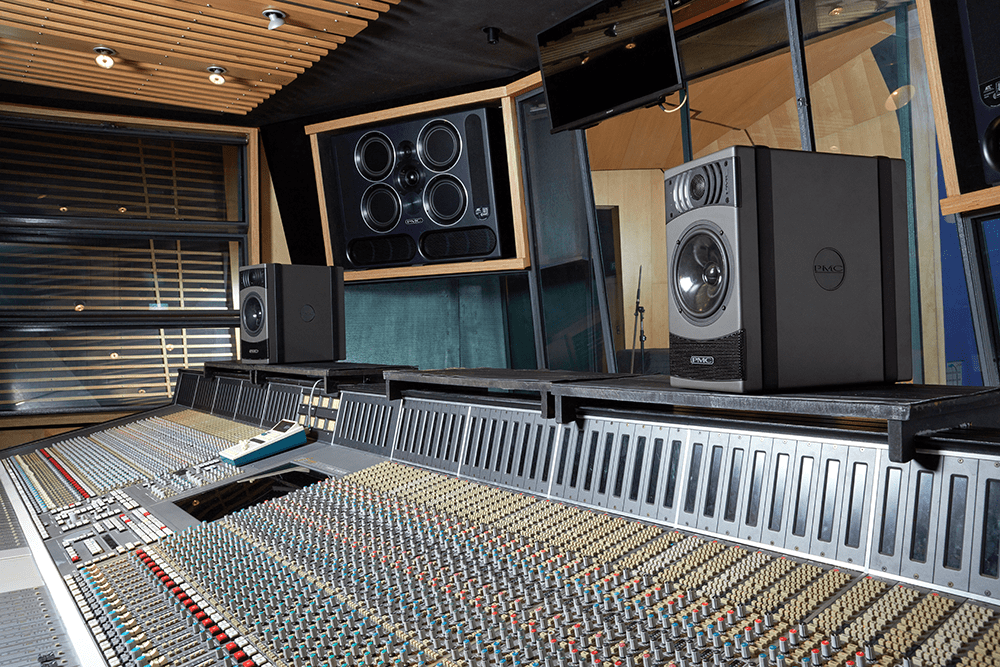 I spent a lot of time with the monitors and did find this to be true. The speakers do become more rounded and, if anything, revealed some flaws in my reference speakers which started to sound rather muddy and flabby in comparison (I won’t name and shame them just yet).

During my time with them, I’ve come to the conclusion that the PMCs have a more joined-up set of low frequencies. They almost seem to break the mix up and offer it to you on a plate which, of course, great monitors should do. You should be able to extract this detail and work on it when mixing and, really, all of that detail is there.

They are totally in control of their sound, in other words. It’s like working with accurate control freaks. They don’t always tell you what you want to hear, but they’re usually (and annoyingly) correct, and I think these PMCs are actually bang on the money.

Another aspect of the result6s which I found superbly impressive is the sound stage. It seems to be super wide and tall – and that ‘height’ is something I’ve not experienced so much with many other monitors – perhaps only those twotwo6s.

I owned. Again, this really helps the mix spread out in front of you – around you actually – so you can pinpoint all of those details (and flaws). I played a mix that was a couple of years old, for example, and was able to identify a couple of low end rumbles for the first time, which I’d either unconsciously ignored or not noticed before. A quick filter and they were gone, to leave a much cleaner mix.

And cleanliness is what you really do get with the results. It’s like you’re giving a mix a good rinse, un-muddying it, if that is a word, and representing it. I almost feel like I need to put everything through them, as I think I’ll end up with less stuff going on. You can simply hear more of what is there, and surely we can all benefit from a bit of that kind of stripping down in our mixing.

As I spent more time with the results, I did end up running more and more mixes though them – like putting them through a PMC washing machine. The result was either a sense of crushing disappointment (some of those 25-year-old tracks really are terrible and really badly mixed) or encouragement (my more recent stuff is a lot better). And in pretty much every case, improvements could be made, which has to be a good sign for great monitoring, right?

The results are in

The result6s are undoubtedly honest, but not in a way that will sound harsh after extended mix sessions. They’re honest in a controlled, detailed way and will show you your music in new ways, certainly in terms of breadth and height. I think they’ll also work in all sorts of studio sizes – I was running them at quite low levels as my studio is quite small, but there’s enough power here for larger rooms – and, of course, that extended sweet spot will be great for bigger rooms, too.

I could offer some more ‘result’ puns in this summary, but I’ll resist. The result6s are fabulous monitors at a great price for the PMC badge. Now I can have a decent bathroom, as well as a set of great monitors. My world is finally complete… 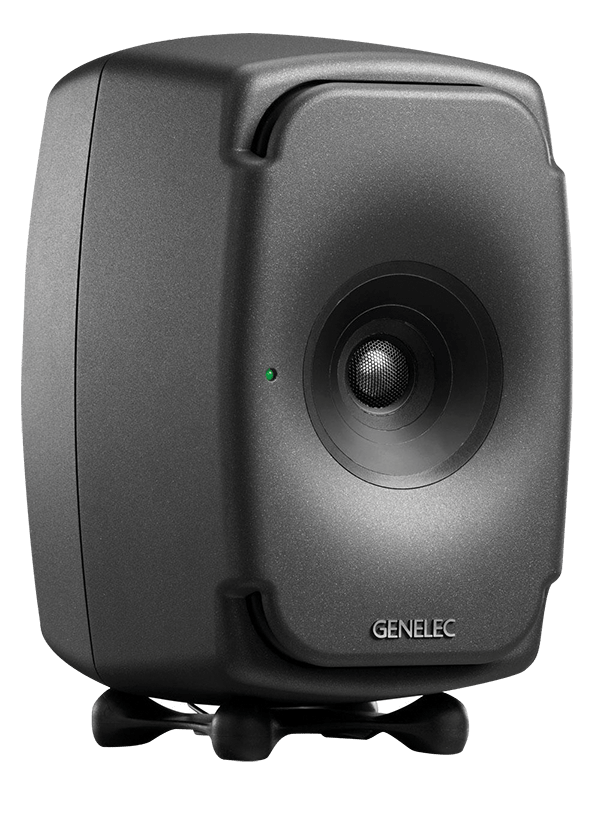 Even though these are in a different league price-wise, I’m including them as they share an accurate sound, wide sound stage and sweet spot. The extra cash gets you room correction and acronyms!

My review of the Dynaudio 18S sub comes out next month, but I can tell you here and now that, combined with the LYD 48, it offers you a very classy four-way and bass-extended system for not a huge amount more cash than the PMCs.