The kick drum is at the heart of many kinds of music, and Plugin Boutique can help you get it just right. Hollin Jones kicks off… Details Price £39.94 Contact Via website Web www.pluginboutique.com Amazon.co.uk Widgets There are a fair few software drum modules on the market but very few of them actually focus entirely […] 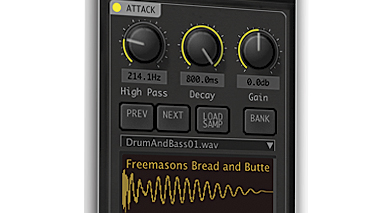 The kick drum is at the heart of many kinds of music, and Plugin Boutique can help you get it just right. Hollin Jones kicks off…

There are a fair few software drum modules on the market but very few of them actually focus entirely on one kind of drum sound, opting instead to model whole kits. Most are very good, of course, but there are circumstances in which a producer may want to pay particular attention to a very specific drum element. For those working in electronic music, the kick drum is absolutely central to the sound and feel of a track, providing both the energy and drive of the mix and creating a foundation around which all the other elements of the track can hang.

Plugin Boutique, in association with Credland Audio, has come up with an instrument that deals with the minutiae of generating and tweaking kick drum sounds and those sounds alone. BigKick comes in all current plug-in formats for Mac and PC, with Pro Tools support in development. At a shade under £40 it’s affordable and of interest to anyone for whom the kick is the very heart of a track. That is to say, anyone working in dance music.

Installation is straightforward and then you’re free to call up the plug-in on an instrument track inside your DAW. Since it only does kicks, you will have to program the kick part separately from the rest of the drums or perhaps program a drum part in another instrument and then split the kick MIDI notes off to the BigKick channel, or extract them from a pre-made MIDI part. None of this is particularly difficult to do in modern DAWs.

The plug-in uses a combination of a sample for the basis of its sound and a number of synthesis stages to post-process it, and the result is that you have a huge amount of control over the results. It comes with a decent selection of kick samples, some from noted producers like Freemasons and Cutline, and there are selectable presets for both the source sample and the attack model. You can also load your own samples, of course, so your existing library of kicks can be used easily via the slick browser system.

The plug-in has three sections. At the base is the master section where you set gain and access file loading, sample playback mode, autoplay and there’s an original sample button to A/B sounds. The Edit button here opens a separate window where you can shape the sound with controls including width, attack pitch, drive, velocity sensitivity, body gain and high pass filters. Moving up to the top of the main window you’ll find the Attack section and here you can shape the attack of the sound, so crucial to controlling the way a kick sound bites, or conversely has a more rounded attack. 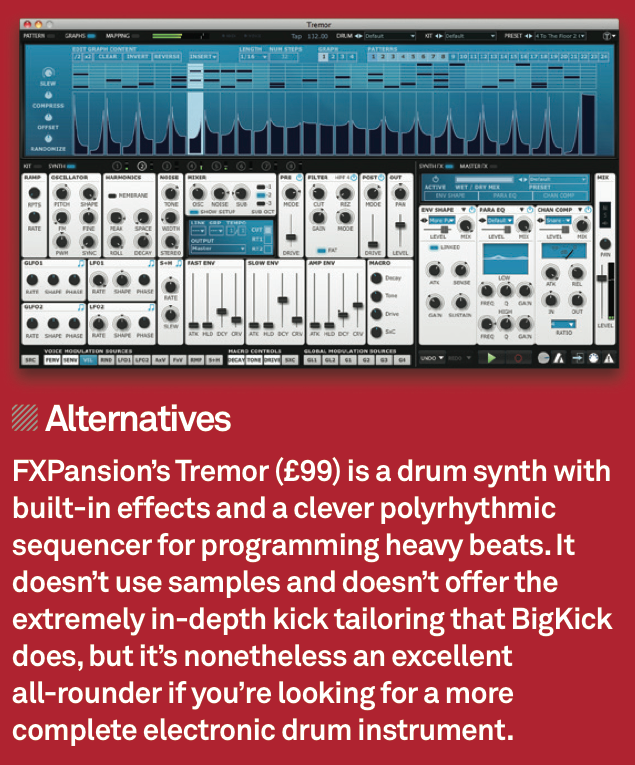 A waveform display helpfully shows you exactly what you’re doing to the sound and clicking and dragging from this area into your DAW will place an audio version of the clip into a track. This is really handy and much easier than having to use your DAW’s export function. There are many things you can do with an audio clip that you can’t when the sound is still being generated by a plug-in, so this will come in useful for many people. You can also flip through attack presets easily to find something that works for your needs.

The central section is called Body and here is where a synthesized ‘thump’ is added to your existing signal. This is what helps to give the kicks a real boost and make them so good for electronic music. Attack, hold and decay can be set as well as the tonal depth of the synthesized sound and its curve – the rate at which the pitch decreases. If this all sounds a little dry, it’s very intuitive to actually use as you can hear the results right away. By adding just the right amount of Body to a kick you can transform it from a regular sound into something much bigger and more weighty. There’s another nifty trick here too – a menu that enables you to tune the kick to a specific note. If your song is in the key of E, for example, tune the kick to make everything gel.

If you think a plug-in that just does kick drums sounds limiting, you’d be amazed by this one. Yes, it’s very focussed, but that’s a good thing when it does what it does so well. Other modules will let you tweak and synthesize kicks, but rarely with this depth. When the kick is the core of your track you want to get it right, and BigKick certainly helps achieve that. 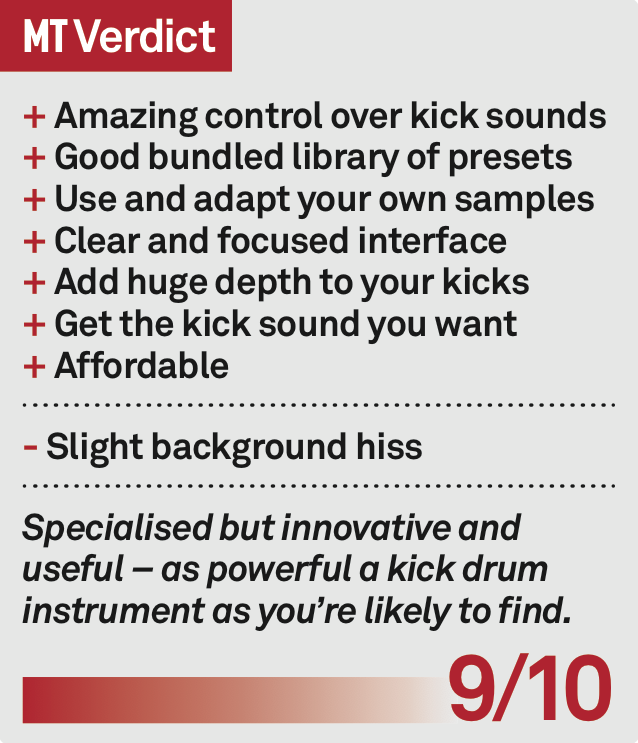 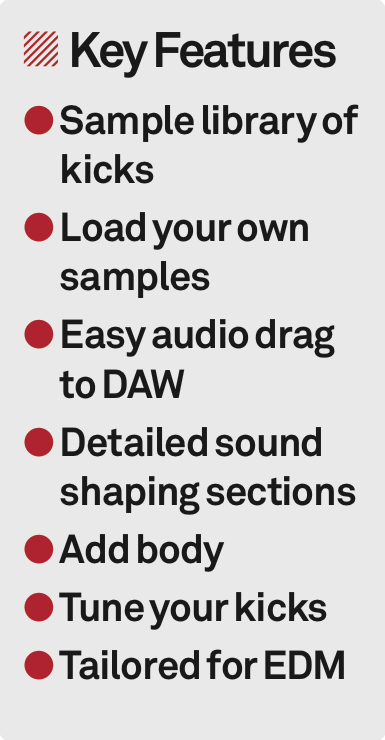