We’ve seen more and more plug-ins over the last year that enable deeper dynamic control. On the surface, the DSM V3 from Pro Audio DSP appears to be a worthy overall tool for this purpose, so let’s take a closer look. 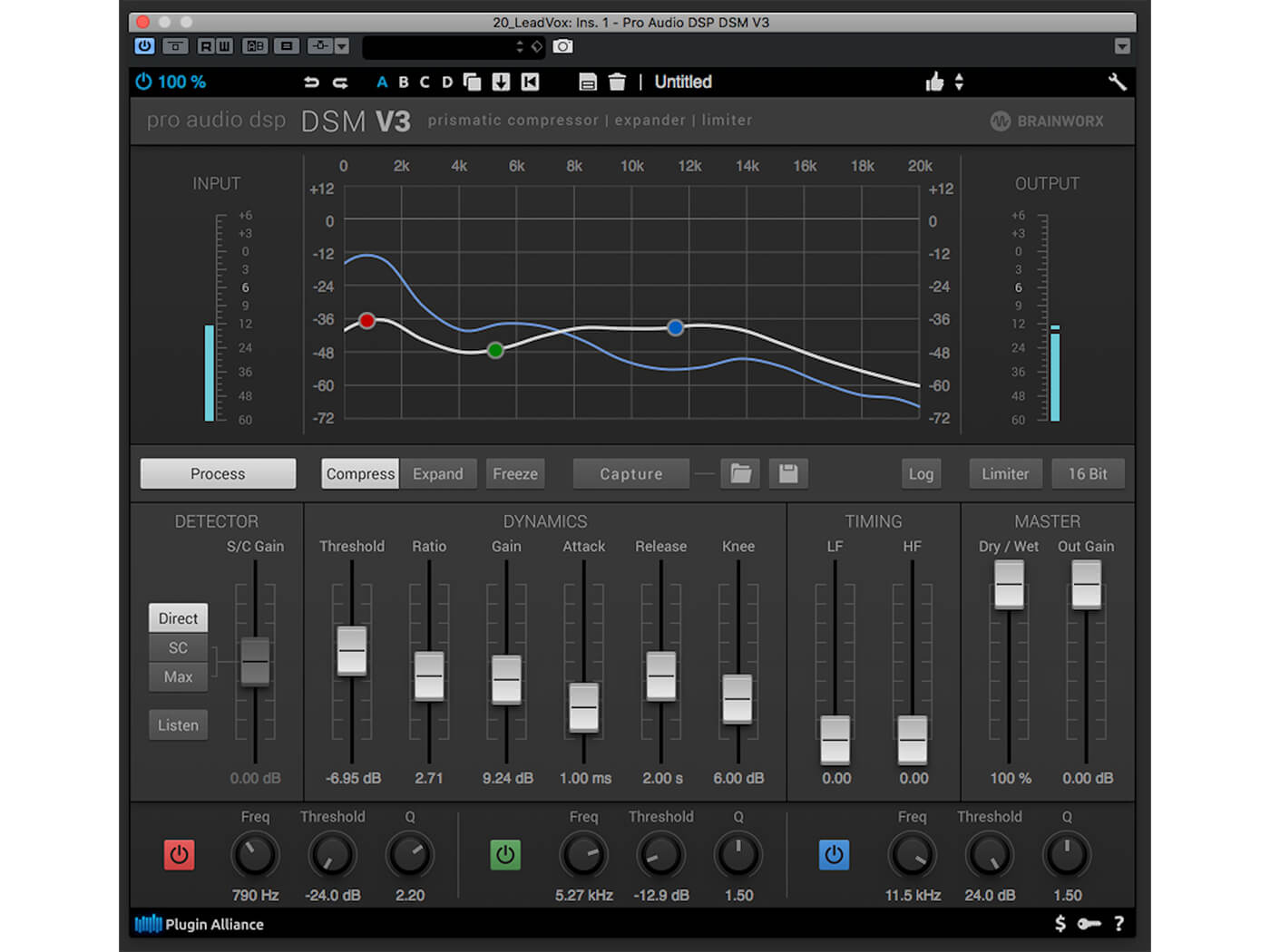 As a small independent developer, you’d be forgiven for never having heard of Pro Audio DSP, but the credentials of this three-person development team are above reproach. Lead designer Paul Frindle was part of the team at SSL that developed the legendary G and E series consoles, as well as being a key player in the development of the equally legendary Sony Oxford R3, which is where he met the rest of the Pro Audio DSP team, who also worked on the R3.

Being independent means that the Pro Audio DSP team have been able to carve their own path, focussing their considerable combined experience into just a single plug-in processor, the Dynamic Spectrum Mapper, or DSM for short.

Recently updated to version 3, DSM is described by its developers as a “prismatic compressor / expander / limiter”, but is conceptually most akin to a multi-band dynamics processor or dynamic EQ. But unlike a conventional multi-band processor, which will typically offer between three and six processing bands, DSM’s signal splitting is more like a comb filter, separating the signal into numerous frequency bands. Presumably this is where the ‘prismatic’ moniker comes in: a prism separates white light into constituent colours, whereas DSM separates audio into constituent frequencies.

Thankfully, configuring all of these bands is much simpler than you would imagine, and is done mostly with a set of conventional compressor controls – threshold, ratio, make-up gain, and so-on – and a graphical readout not dissimilar to what you’d find on an EQ plug-in. This readout shows a real-time FFT spectrum analysis of the input signal, with a ‘threshold curve’ overlaying it. The threshold curve can have up to three control points enabled on it, and these can be dragged around on the graph or modified via the set of three colour-coded frequency band controls that run along the bottom of the plug-in window.

There isn’t any form of gain reduction metering, though, so you have to judge this by studying the FFT and threshold curves (and listening very carefully). In expansion mode things are reversed, i.e. any frequencies falling below the threshold curve will be expanded according to the global ratio. The processing chain is topped-off with a limiter to protect against the intense peaks it’s possible to create with DSM – this is just a standard limiter, though, and isn’t impacted by the threshold curve. 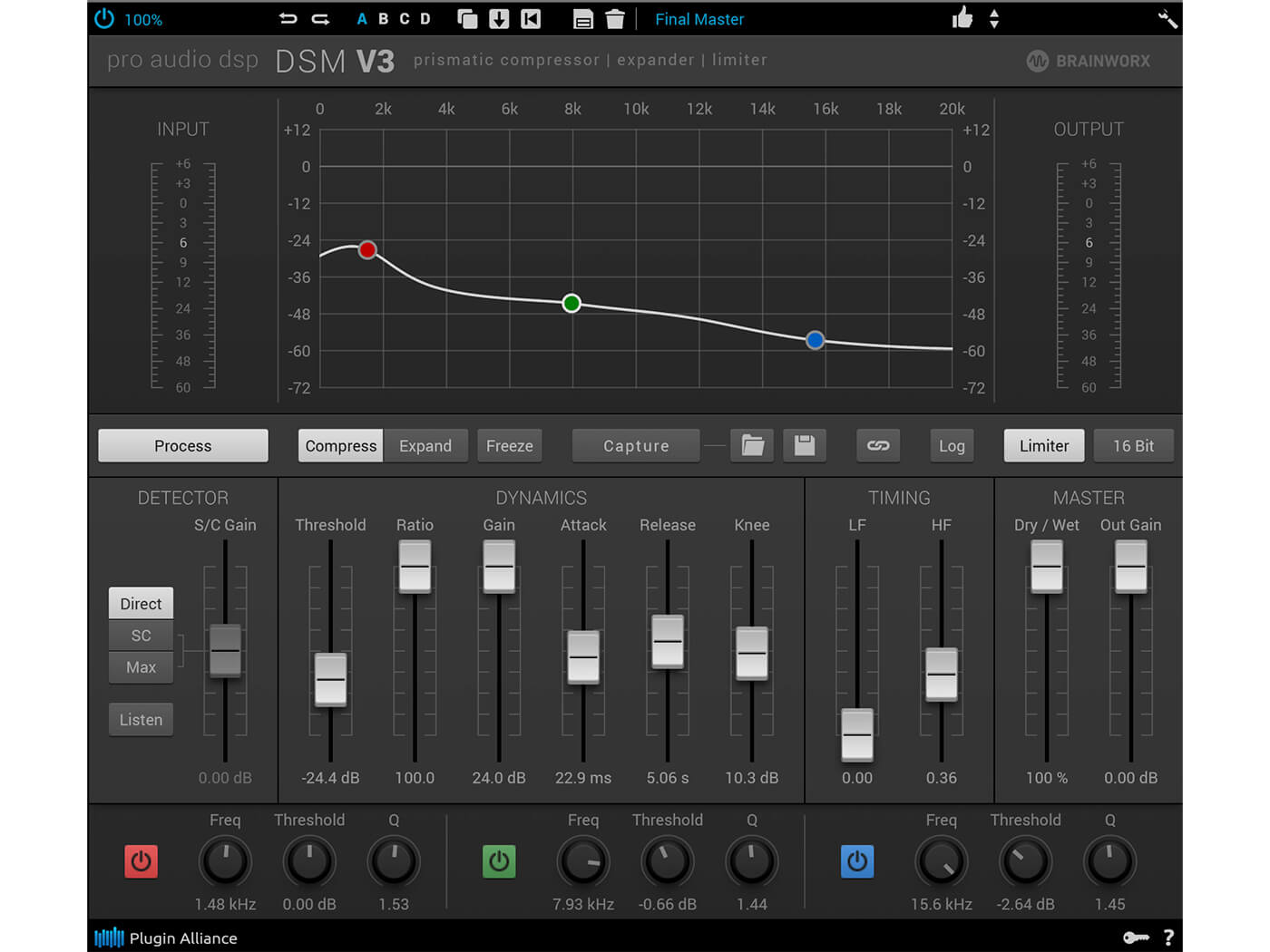 When using DSM, the first task is to capture or load a threshold curve. The idea here is that you sample the spectral response of the audio you’re processing, either momentarily or averaged over a longer period by pressing the Capture button, or by loading a curve you had sampled previously. This is then used as the basis of the threshold curve. A master threshold control fader adjusts the threshold of all frequencies simultaneously – in other words, it moves the entire threshold curve up and down so that a greater or lesser range of frequencies will be processed.

As with the ratio and threshold, the timing of the dynamics – the attack and release times – are controlled globally. Worthy of special mention here is the up-to 30 second release time that’s available. At first glance this seems comedically excessive, but when used in the right way, with a threshold curve that allows only narrow bands of frequencies to be processed, long release times can create some very interesting results.

Like most dynamic processors, DSM allows you to process a signal based on the spectral characteristics of a different signal. One way of doing this is to load a threshold curve that you had saved previously, but DSM also supports external side-chains. Interestingly, the plug-in can key its compression/expansion from a mix of external and direct side-chain signals, which in effect means the processor will key from the loudest frequencies within either signal. Used correctly, these capabilities allow you to imprint the spectral characteristics of one part onto another, and to do so quickly and easily. 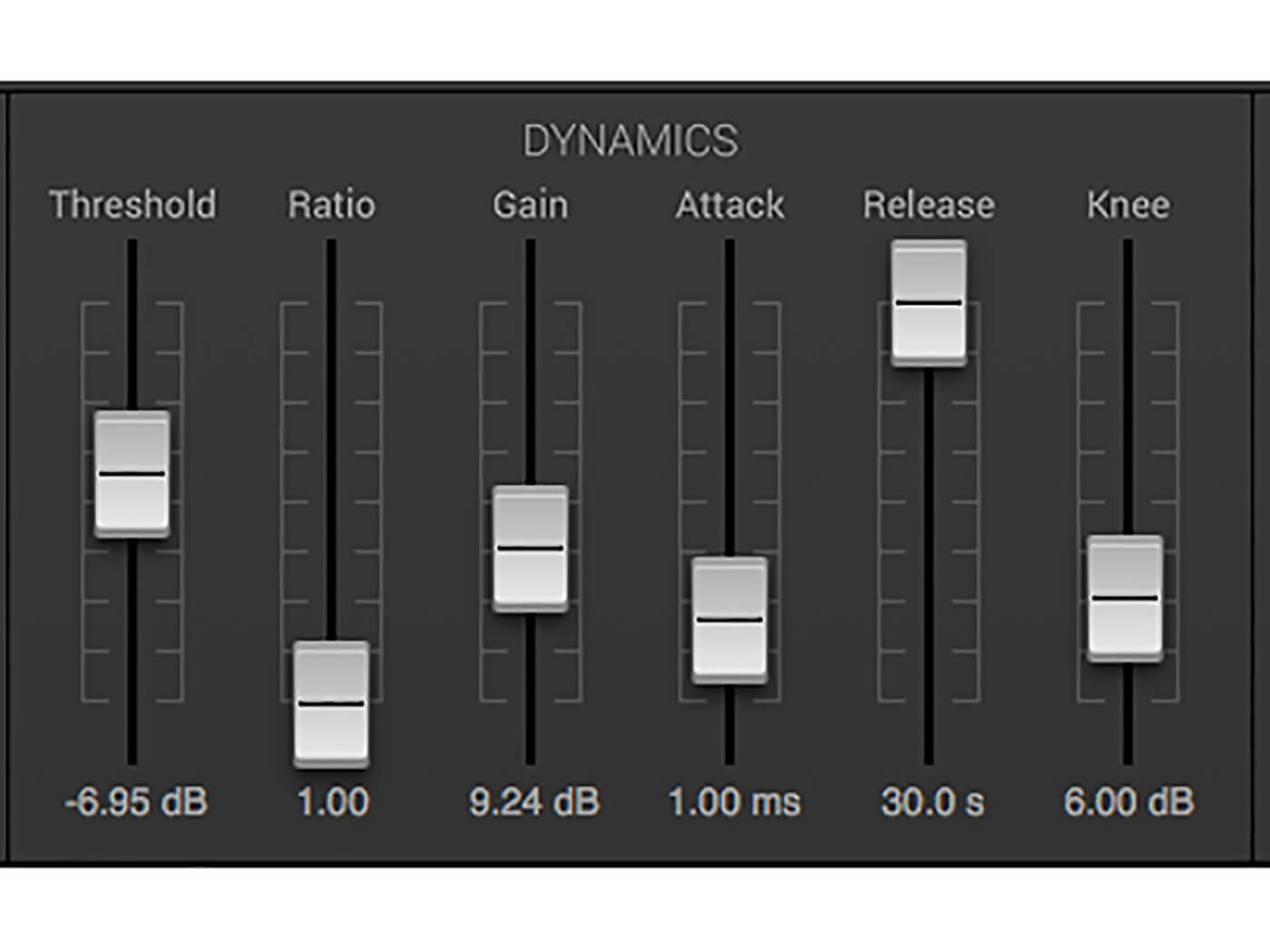 Although DSM’s concept takes a little bit of getting used to, the plug-in itself is easy to use, with all of its underlying complexity wrapped up into a small collection of familiar-looking controls. But it doesn’t work on everything: the signal splitting techniques it employs causes the width of each band to narrow the higher its frequency range. As a result, DSM is best suited to working with material that has a lot of detail in the upper-mid to high frequency ranges, and it really can do wonderful things with such sounds.

Vocals are a particular speciality: DSM is exceptional when it comes to evening-out the tonal variations caused by changes in the vocalist’s proximity to the mic; it is perfect for bringing out the ‘edge’ and ‘breath’ of a voice; and it is better at de-essing than most dedicated de-essers. DSM also serves well in mastering, especially when used to process the side-band in a mid-side mastering setup, where its ability to bring out high-end detail creates a greater impression of space in a mix.

DSM isn’t just a compressor/expander, and it isn’t exactly a dynamic EQ, but when fed with the right sort of material, and set up in the right way, it’s far more capable than either of these things. It’s certainly earned itself a long-term stay in my plug-in rack. 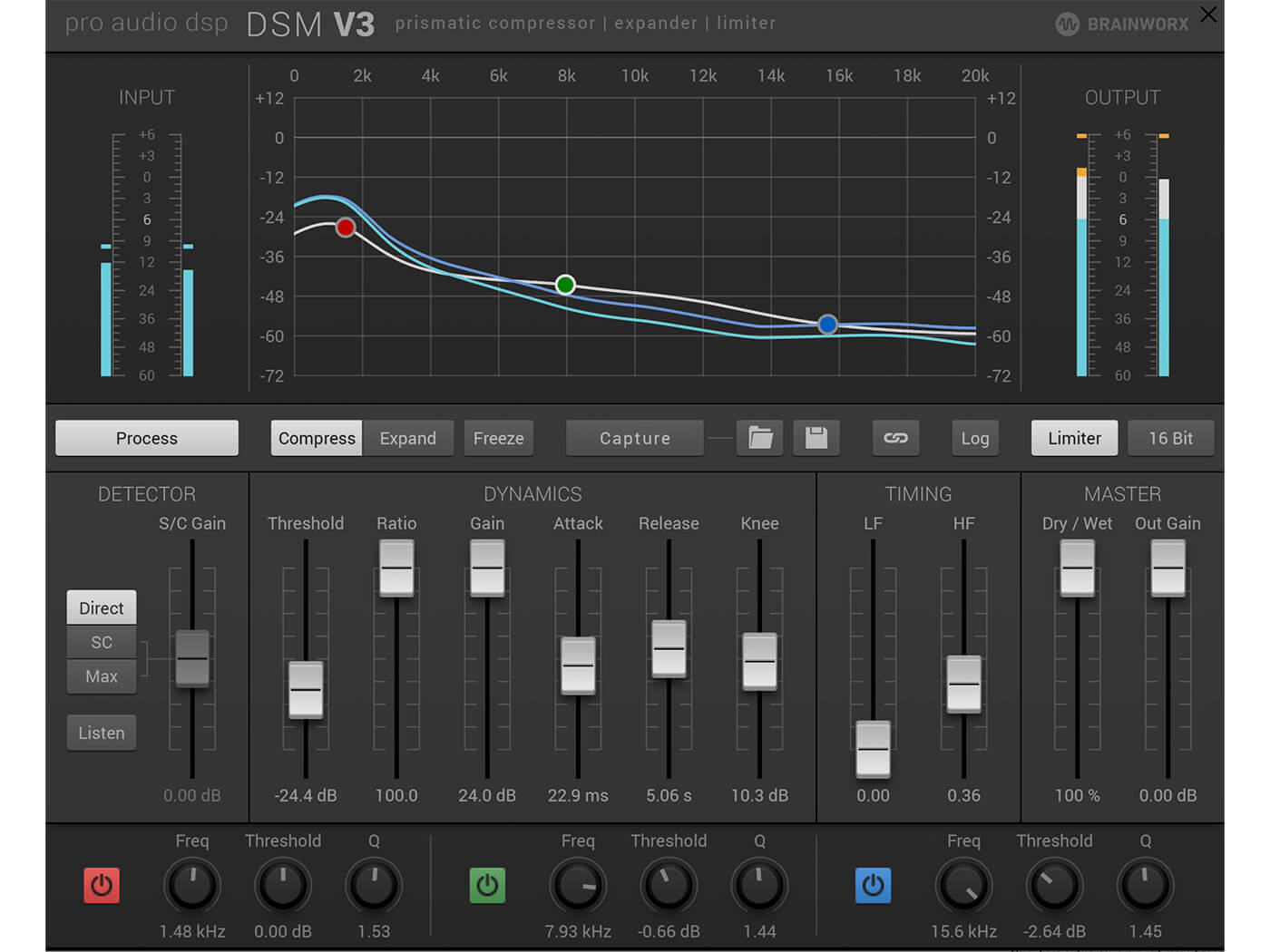 DSM V3 only comes into its own when processing certain types of material. It works best with sounds that do their most important work in the upper-mid and high frequency ranges – above around 1.5kHz-or-so – making it ideal for many solo instruments, lead synths and the like. It excels with vocals, where it can take control of both dynamic and frequency variations, evening them out to deliver a polished, finished sound.

DSM is also well suited to certain mastering tasks too, and whilst it’s unlikely to become your main go-to mastering compressor, its ability to add detail in the higher frequency ranges is quite unlike anything else. It’s not a cheap processor, so be sure to check out the 14-day fully functioning demo version. 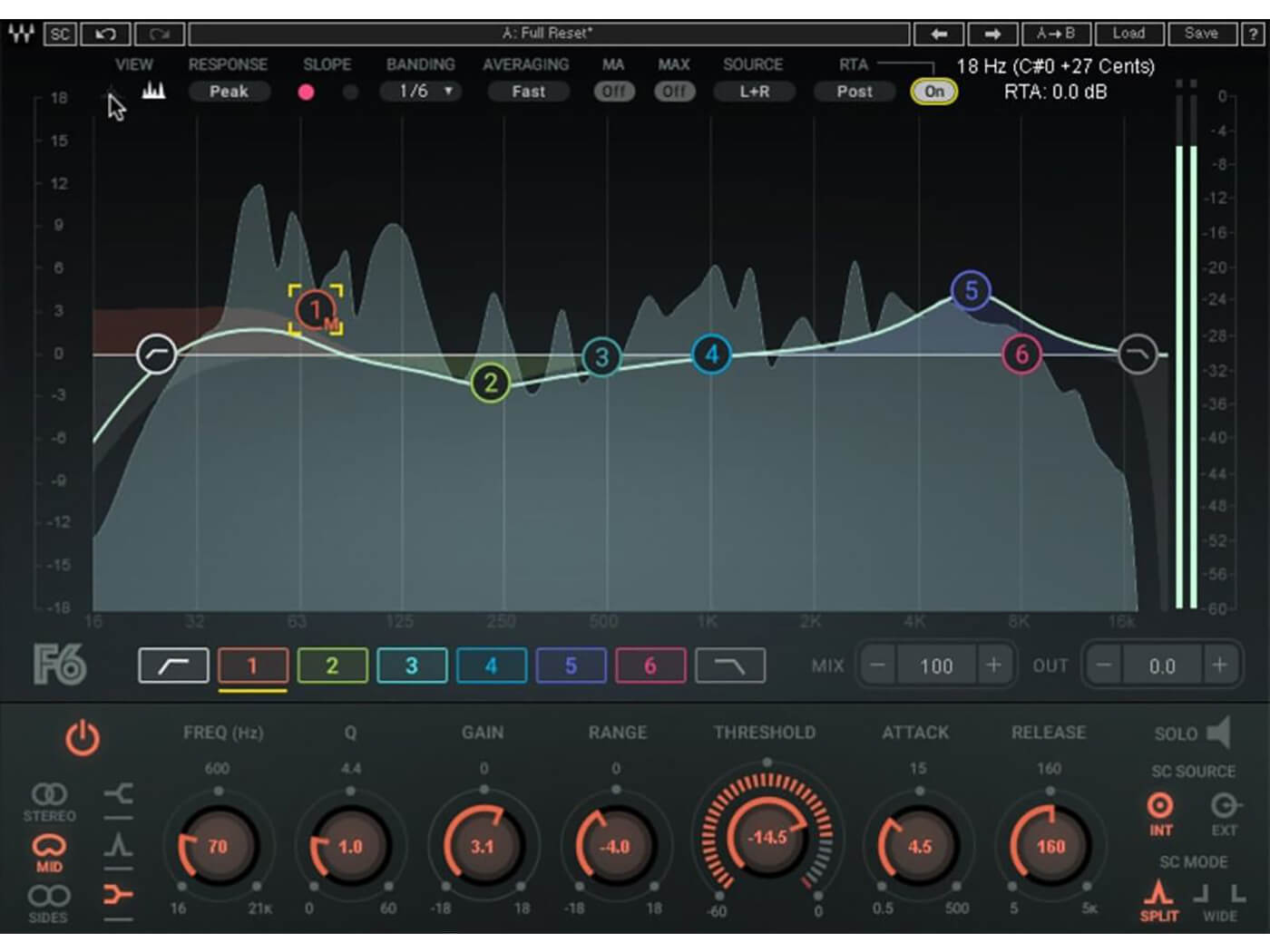 Waves F6 is a six-band dynamic EQ known for its surgical accuracy and precision. It can deliver similar results to DSM, but setup is far more fiddly and involved, with each band having a full complement of dynamics controls. Its mid-side mode makes it ideal for mastering work. 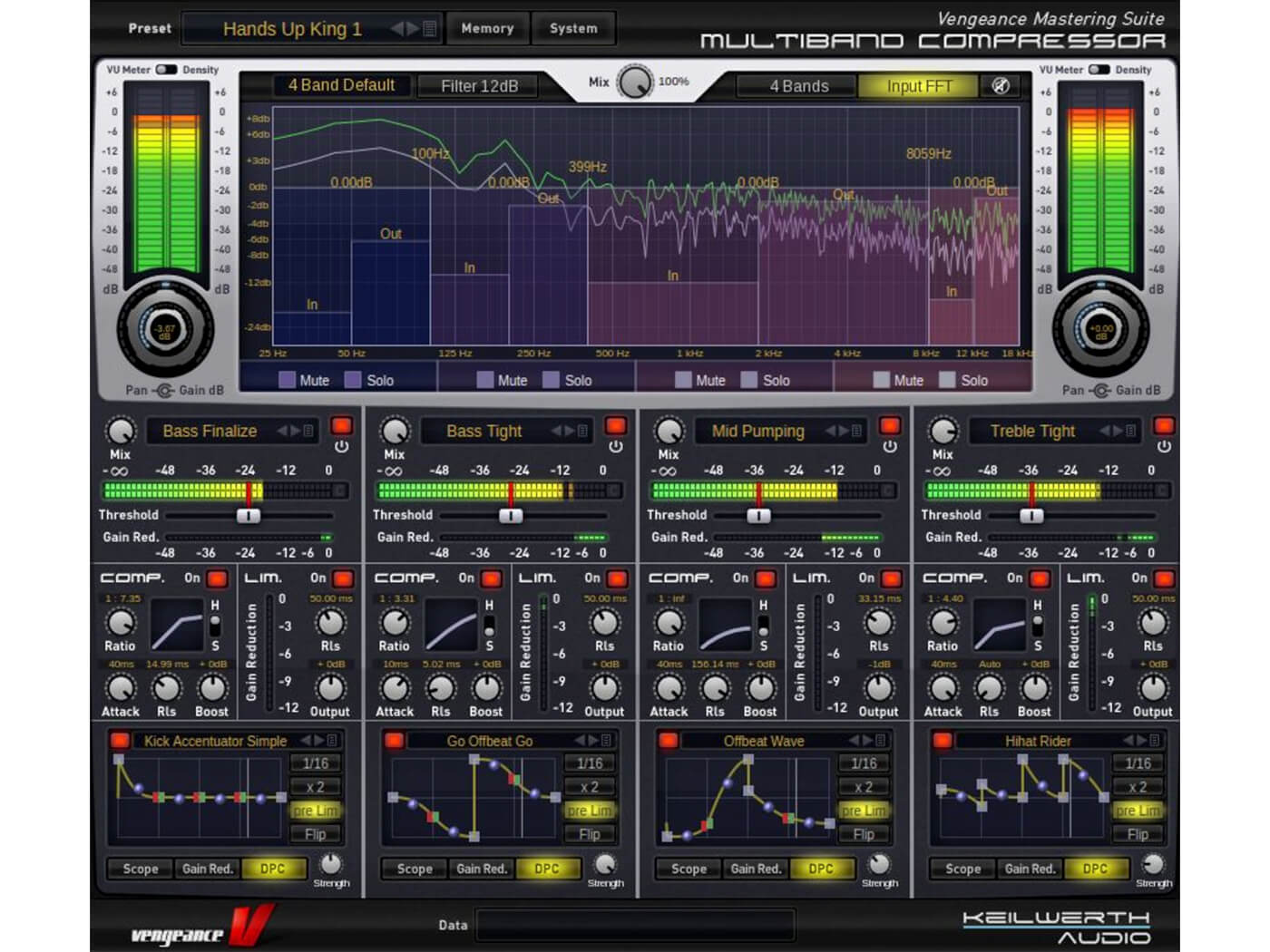 Vengeance’s Multiband Compressor is part of their Vengeance Mastering Suite processors, but its comprehensive dynamics toolbox is equally suited to mixing duties too. It can work in broadband mode, or split the signal into up to four bands. The crossovers are phase linear too, so don’t create phase issues around the cutoff frequencies.