Well known for its range of polished sampled-based instruments, Los Angeles’ Output has turned its attention to processing with this hot-to-trot multi-effect. Let’s fire it up.

Billed by its creators as an interactive distortion plug-in, Thermal features a slew of distortion algorithms, as well as traits you perhaps wouldn’t expect of a dedicated distortion effect.

LA’s Output has a solid reputation for building slick and easy-to-use plug-ins, so it’s no surprise that its latest takes this white-hot design-focused approach to the next level. Thermal boasts a minimal aesthetic, with its main page anchored by a large circular  X/Y pad ringed by topographical lines, supported by an adjacent dry/wet fader and input and output level controls. For the main page, that’s your lot. There’s no way to adjust anything other than the two macro parameters governed by the X/Y pad.

While it’s possible to audition and tweak effects via the main page, more experienced users looking to turn up the heat should head to the plug-in’s advanced section. This is where Thermal reveals its inner workings. Here, it’s possible to get a better idea of the route the audio takes through the plug-in, beginning with the stage processing section.

Users are given three stages, which are processing chains that run in a serial arrangement. The first part of each is the stage filter, made up of low- and high-pass filters that dictate which section of the frequency range is processed and which remains dry. If you set the low band to 30Hz and the high band to 300Hz, for example, only the region in between will be processed by the following stage distortion and stage effects, with the frequencies above 300Hz remaining dry. This section also includes a Refilter button that refilters the processed signal after the stage distortion and stage effects. The aforementioned dry/wet fader means you can also dial in some of the dry input signal at the output stage, which means there’s potential for fairly complex sound design here.

Following the stage filter, there’s the stage-distortion section. Here, you can select one of 19 distortion algorithms, including shapers, folds, clippers and drivers, as well as a few other interesting effects. Most of the modes only have drive and output controls but some sport additional shaping and feedback parameters. From the subtle warming of Light Shaper to the satisfyingly crunchy frequency-filling nastiness of Sine Shred, the algorithms sound fantastic, and it’s possible to sculpt huge 808-style kick drum sounds using just a single band of distortion.

Spring Drive gave us particularly engaging results, the sound becoming increasingly complex both harmonically and movement-wise as we cranked the drive level. It’s all simple and gratifying to use. Thermal’s certainly comes good on its promise of steamy distortion.

The stage-effects section follows the stage distortion, and presents the user with a choice of nine non-distortion effects: bit-reducer, chorus, compressor, stereo delay, filter, flanger, freq shifter, phaser and reverb. These are all relatively simple, with a handful of controls each, as well as a dry/wet fader. These effects aren’t particularly exciting in isolation but, in context, they make for spicy additions that enhance Thermal’s flexibility.

Following the stage effects, there are two simpler processing sections: stage width and stage tone. The former features Sides, a mid-side balance control, and Width, which adds time-based stereo width to your sounds. This width enhancement appears to be mono-compatible, albeit with some transient smearing. Stage tone is an extremely simple equaliser with high- and low-shelf controls that are applied after the refilter stage. It’s nothing groundbreaking but another useful addition nonetheless.

Thermal’s three stage-processing chains give you a blistering level of control over its sound, and will likely delight sound designers and mixdown perfectionists looking for ways to add multiple layers of distortion to a sound, be it hot and heavy or more subtle.

Unfortunately, the product’s online-only manual doesn’t properly explain the effect’s architecture. A more explicit overview of the stage-processing section’s serial routing and how the stage filter works would make it much easier for newcomers to get to grips with the plug-ins advanced capabilities. 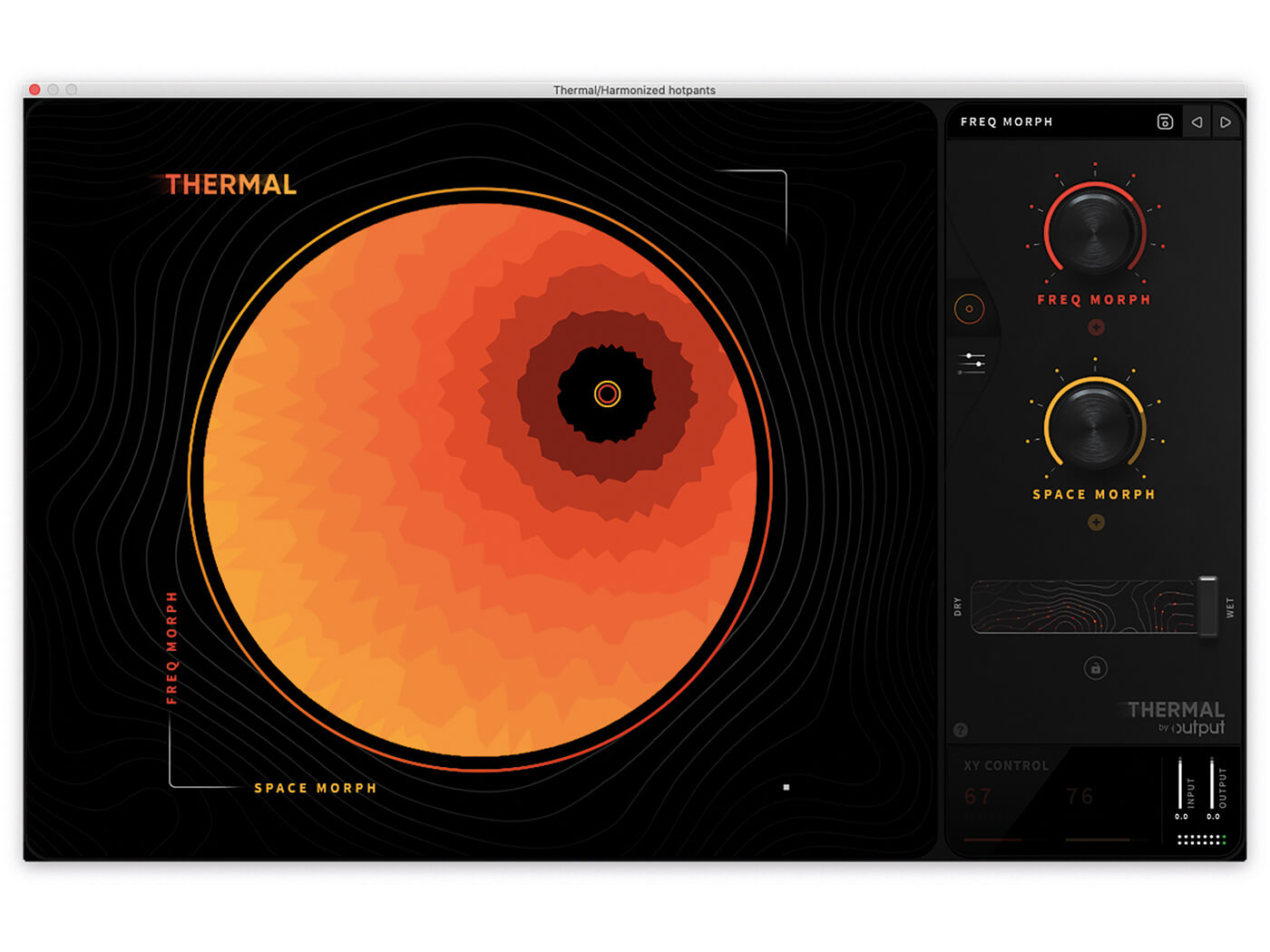 Getting a sweat on

There are additional modulation tools in the form of a couple of envelopes and, of course, those X/Y pad-assigned macros. The envelopes are flexible in that you can add a seemingly unlimited number of nodes. These envelopes can be synced to the host’s tempo or set to free-running mode, although there’s no way to trigger them via MIDI.

Modulation is assigned via dragging and dropping a modulation handle, and the modulation amount can then be adjusted by dragging a crescent on the destination parameter, and can be swapped between unipolar and bipolar.  The macros work in the same way, and both the envelopes and macros can be assigned to multiple destinations.

Thermal’s preset game is tight too. The plug-in offers more than 250 presets categorised in a tasteful preset browser that looks as if its design was based on the website of a high-end men’s skincare brand. The presets are superb too. Even just running a few loops through the supplied patches proved inspirational.

Considering the quality and variety of the factory patches, the simplicity of Thermal’s main page makes more sense: even those who don’t fancy learning the plug-in’s inner workings will still be able to have fun with it by tweaking the presets’ macros. Plug-in presets aren’t always winners but Thermal’s are top-drawer, and it’d be wonderful to see some official preset packs from Output in the future.

Our only issue with the preset browser is that, because it doesn’t feature a scroll bar, it isn’t immediately obvious that there are additional categories that can be scrolled to via the mouse wheel. You could easily miss out on several preset categories and the all-important user category – which, thankfully, features an initialised patch – purely because you didn’t realise there was more than meets the eye here.

Niggles aside, Thermal is a fantastic-sounding, superbly designed effect plug-in suitable for both newcomers and novices. With its reasonable price tag and sultry GUI, this should be a scorcher for anyone who enjoys high-quality digital distortion. 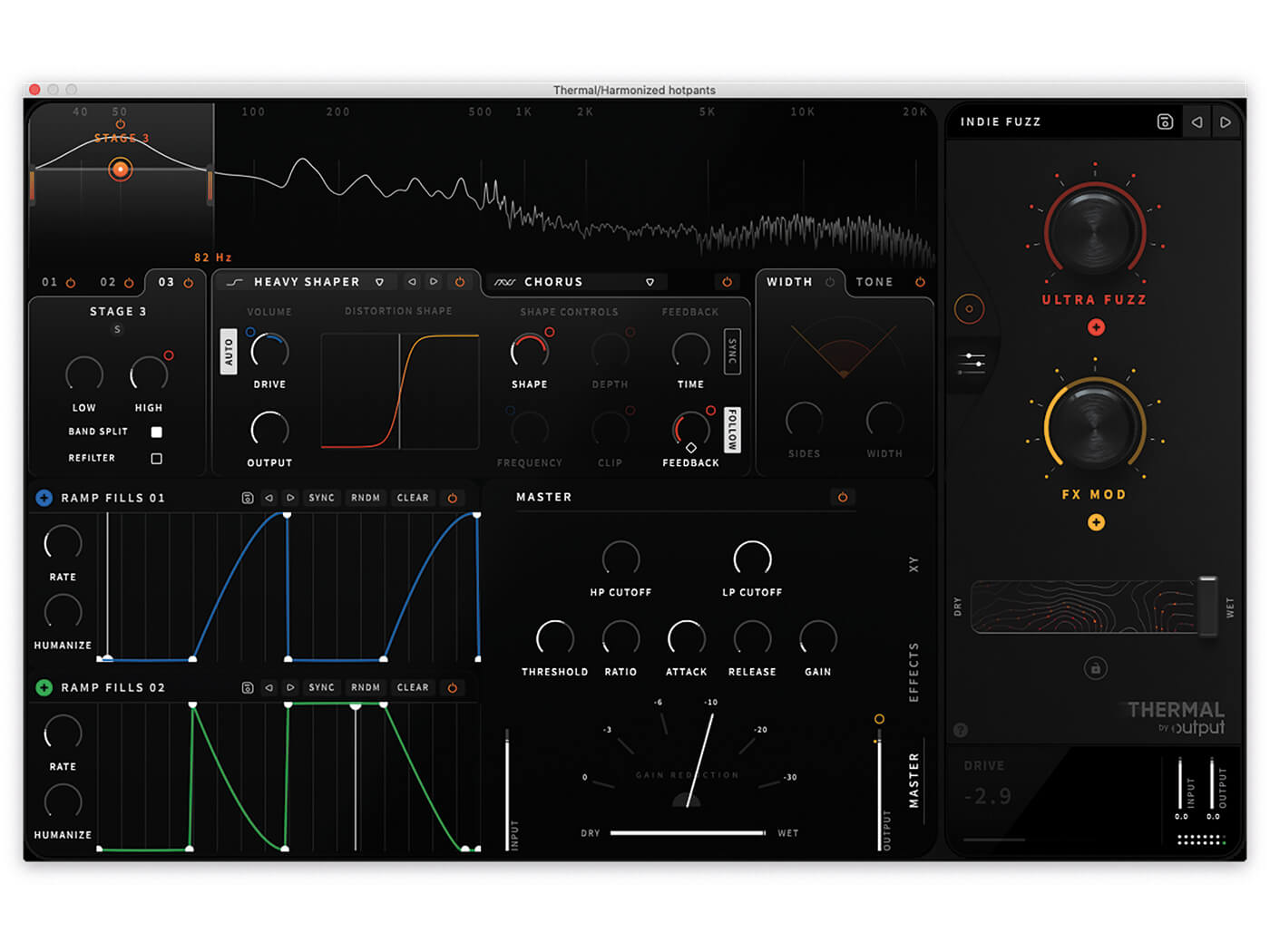 Output made its name with polished-looking, slick-sounding virtual instruments, and has definitely continued in that vein with Thermal. This is a fundamentally solid effect with a wide selection of distortion algorithms that sound sensational and are capable of transforming sounds in exciting and useful ways. These flames are fanned by the stage-processing section’s filtering capabilities, additional non-distortion effects and modulation options too.

Thermal flagrantly violates the first law of thermodynamics by being more than the sum of its parts and, given its reasonable price, it should be a tempter for anyone interested in using distortion for sound design or mixing applications. It might even be a sensible product for newbies, thanks to its presets and idiot-proof main page. The less-than-perfect manual is a shame but not nearly enough to mar an otherwise splendid package. 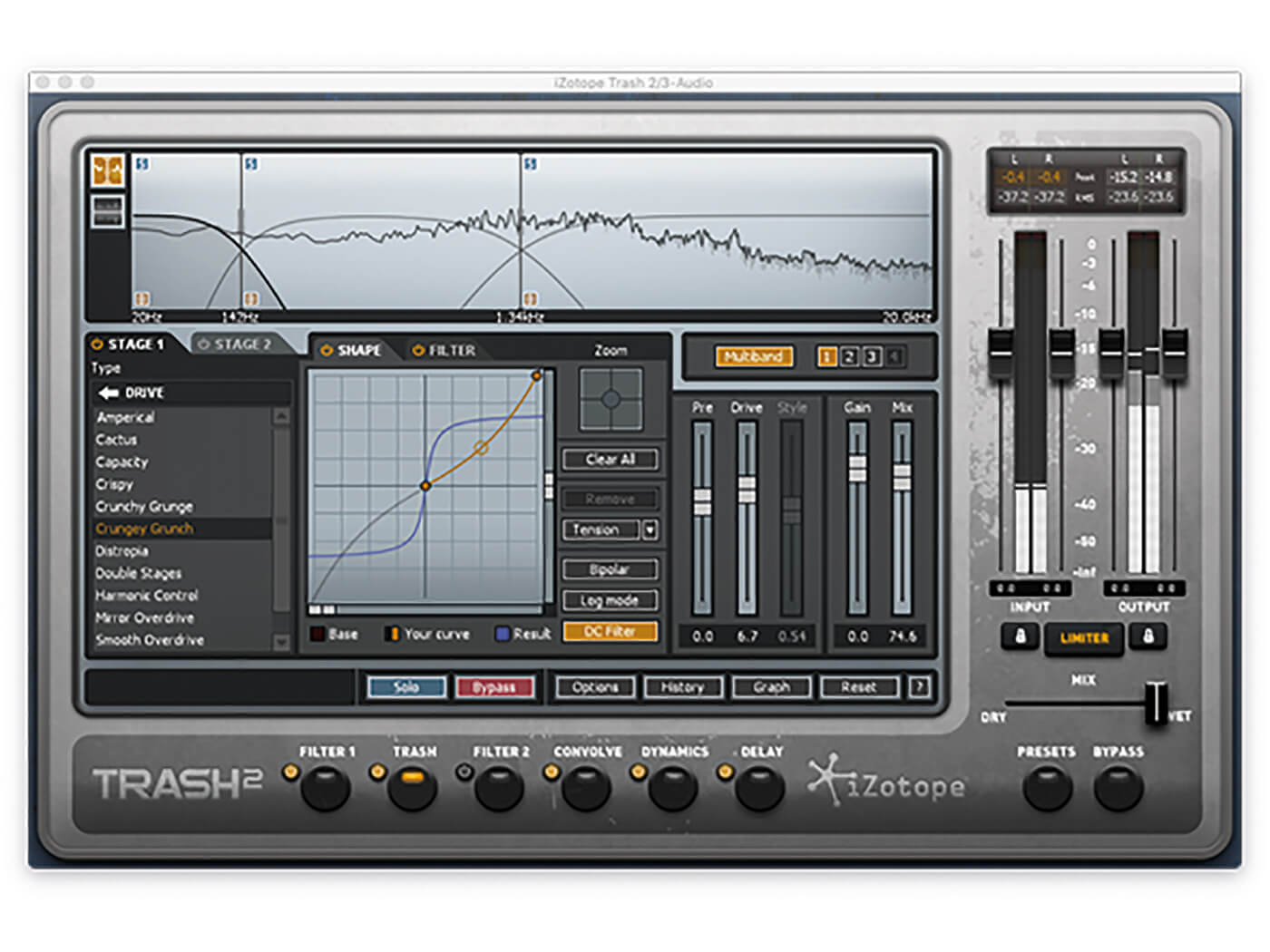 Although a little long in the tooth at this stage, iZotope’s feature-packed distortion effect is a veritable playground for those looking to rough up their sounds. It’s often seen on sale solo or as part of bundles, so keep an eye out if you’re after a bargain. 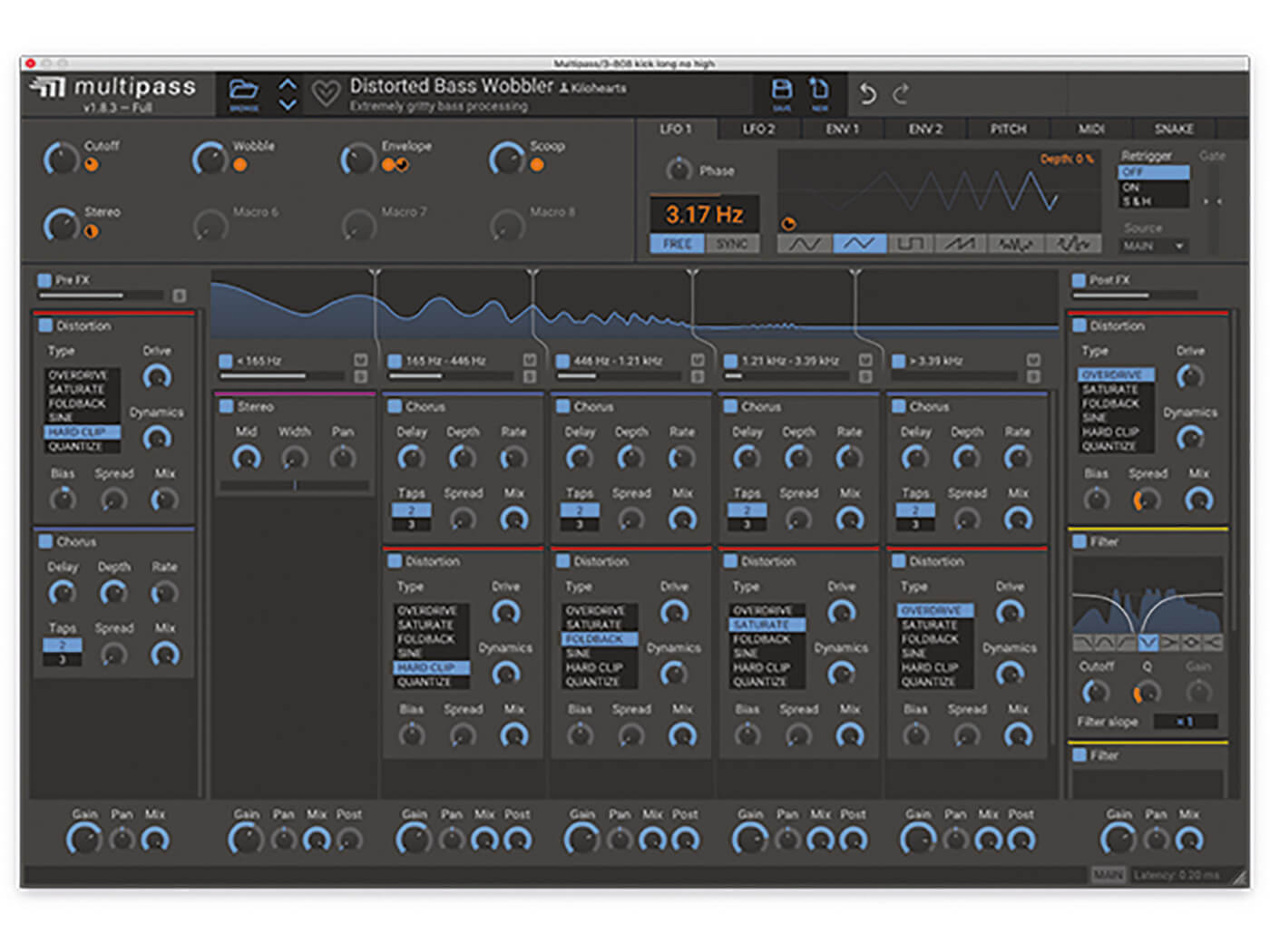 If you enjoy multi-band effects, you’d be foolish not to check out this powerful plug-in that allows you to split audio into up to five bands and add a slew of snap-in effects to each. The £90 basic bundle doesn’t actually give you a distortion effect, so make sure you pick the version that’s right for you.