It’s time to turn up the heat as we take the temperature of FireSonic’s latest plug-in. Will it set your mixes ablaze or pour cold water on your masters? 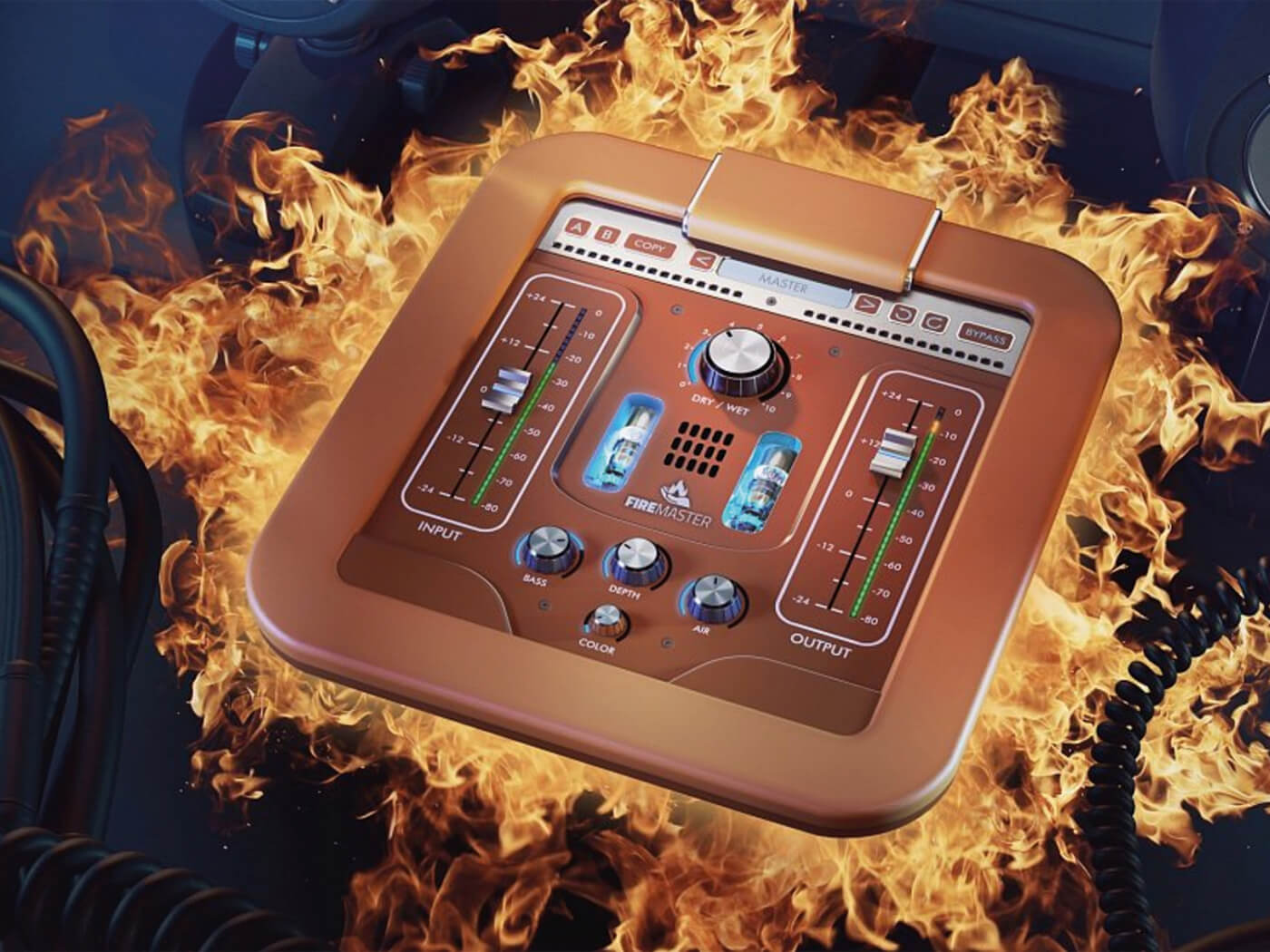 It’s been said countless times, within these hallowed pages and beyond, that audio mastering is a dark art whose mysteries are hard to fathom and even harder to, well, master. Part of those mysteries arise from the moving targets that mastering engineers must aim at, with every piece of music requiring its own bespoke solution: the tools and processes you use are entirely dependent on the nature of the material being mastered, and the way you use those tools varies depending upon the exacting requirements of the situation. In short, hard-and-fast rules are few and far between, and any rules that do exist have to be flexible enough to be moulded and shaped to fit the scenario that’s in front of you.

This hasn’t deterred developers from creating plug-ins that seek to boil down the near infinite variety of options – processors, settings, techniques and more – into a handful of parameters that are easy for non-specialist users to work with. Some such plug-ins focus on a single area of mastering (dynamics or tape emulation, for instance), while others cover multiple mastering processors. FireSonic’s new FireMaster plug-in falls into the latter category. Although it’s not a complete mastering solution, it encapsulates various tools and techniques that engineers use to breathe life and space into recordings.

FireMaster is available in VST, AU and AAX formats for use on Mac and Windows computers. It features retro-styled visuals, its predominant orange colouring and grey/silver presets panel more reminiscent of a certain brand of guitar amp than it is of studio processors. But no matter.

The interface is spacious, attractive and intuitive. It has also been designed to adapt correctly to monitors with different pixel densities so that, for example, the window doesn’t appear tiny when viewed on a Retina display. That said, if you want the panel to be small and unobtrusive or large and in-your-face, it can be freely resized by dragging its bottom-left corner. Alternatively, you can select a scaling percentage from the plug-in’s right-click menu.

Input and output levels are set with a pair of faders, each of which has an LED-style level meter alongside it. Wet/dry balance can be set using a large rotary control in the upper-centre of the panel. The real business of the processor, though, is governed by just four controls: Bass, Depth, Colour and Air.

The first of these adds depth and low-end body to the mix but it’s not just a low-shelf equaliser. It’s tough to be sure exactly what’s going on under the hood, and FireSonic is understandably cagey about revealing its secrets, but it sounds like there’s also some low-end compression and harmonic enhancement going on here too. When cranked to just the right amount, these enigmatic facets can provide a pleasing musical fattening to the bottom end of the mix. Unless you have excellent monitoring with high-end bass response, however, it’s all too easy to overdo it with this bass enhancement.

At the other end of the spectrum is the Air control. This enhances the top-end of the mix, adding brightness, crispness and detail. Like the Bass control, Air seems to use a blend of EQ, frequency-specific compression and harmonic enhancement, and produces equally impressive results.

Give it some air

FireMaster’s Depth control enhances the width and space of the recording. Many mastering-style processors incorporate stereo adjustment features, of course, and in general these work by converting the signal to the mid/side domain and altering the balance between mid and side portions of the signal. More side means a wider stereo image, more mid means a narrower image. The problem with this approach is that, if you want a wider image, you have to accept less focus in the centre of the image.

FireMaster does things differently. It still works in the mid/side domain but it applies a short delay to the mid signal before mixing the delayed signal with the side signal. The higher the Depth setting, the more delayed mid signal is added to the side signal. When decoded back to standard left/right stereo, this creates a thickening to the central core of the stereo image rather than a widening of its outer edges, while the slight delay creates the impression of the sound existing in a more spacious environment.

FireMaster’s final control, Color, is also involved in this thickening effect. It adjusts the length of the delay applied to the mid signal, resulting in both a change of emphasis in the centre of the stereo image – more delay creates a more spacious and less centrally-focused image – and, through the resulting phase cancellations and additions, a subtle change in the tonal character of the thickening effect.

At lower Depth settings, FireMaster’s spatial enhancement is very useful, creating both solidity and space within the recording. But when the Depth and/or Color controls are cranked up, the delay in the mid signal results in a clearly audible echo that would likely do more harm than good to most mixes, although this may find favour when used as a special effect. 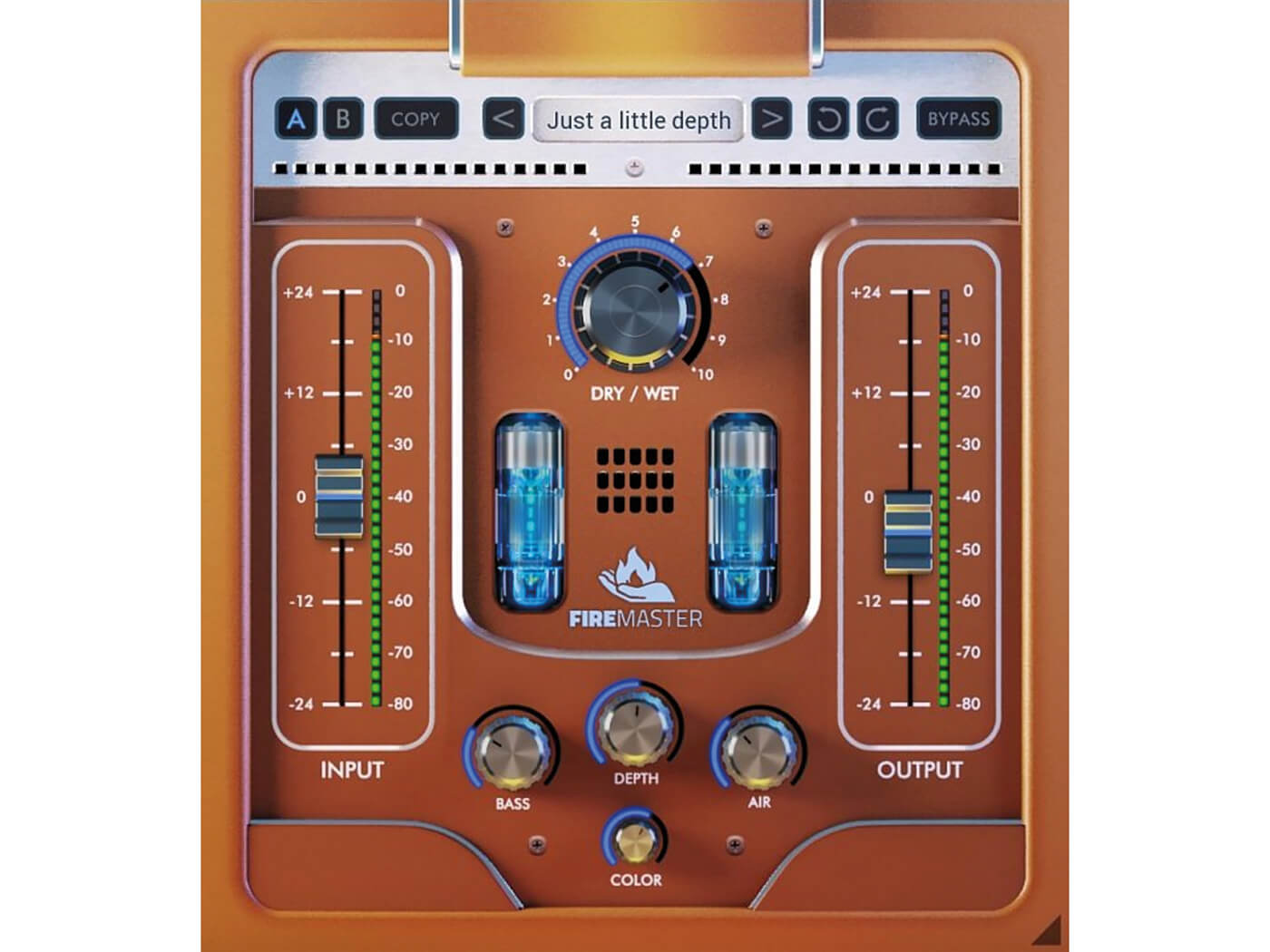 The art of mastering is all about finding the balance between subtle improvements and overcooked destruction – and it’s all too easy to burn a mix. Herein lies the biggest concern with ‘simplified’ mastering processors: they make it too easy to unwittingly cause issues, and this is the risk one runs with FireMaster.

When used with due consideration, however, FireMaster can add a professional sheen to your recordings, and can make all the difference between a lifeless mix and a scintillating master. It’s not just good for use on full mixes either; the blend of processing works well on other sources too. You can use FireMaster to give body and sparkle to drum kits, add gorgeous presence and edge to vocals, and increase the size and scope of synths and basses – just don’t overdo it.

At €99, FireMaster isn’t going to break the bank. It’s likely to prove useful in a variety of situations too, and its unique approach to stereo adjustment is probably worth at least two-thirds of the price alone.

Simplified mastering processors are quite common, and are most appealing to users who lack the time, will or technical know-how to get to grips with the complexities of audio mastering. Those that comprise multiple processors in a single streamlined plug-in can also be good value. Users looking for time-saving solutions will likely find FireMaster a valuable addition to their collection, with it able to add pro-sounding spit and polish to their creations.

Combined mastering tools are useful for experienced mastering engineers too, though more likely for use in specific circumstances rather than blanket processing tasks. FireMaster doesn’t do anything you couldn’t achieve with chains of other processors but it does simplify certain mastering processing techniques. 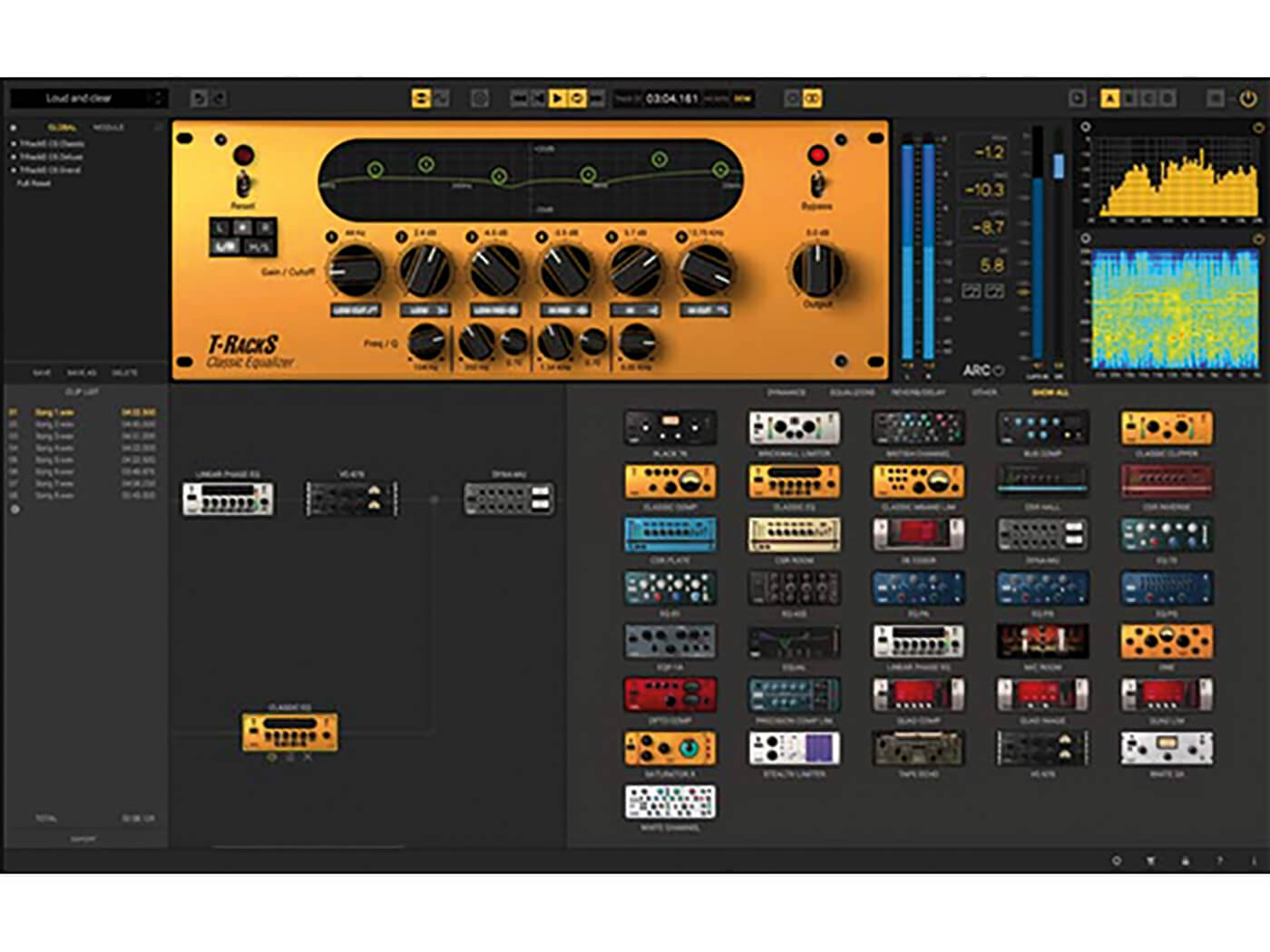 IK Multimedia’s T-RackS has been around for more than 20 years. Starting as a small collection of mastering processors wrapped in their own standalone application, the software now comes with 38 modules, flexible series/parallel processing chains, professional metering and more. You can also add additional processors from IK’s ever-growing collection. 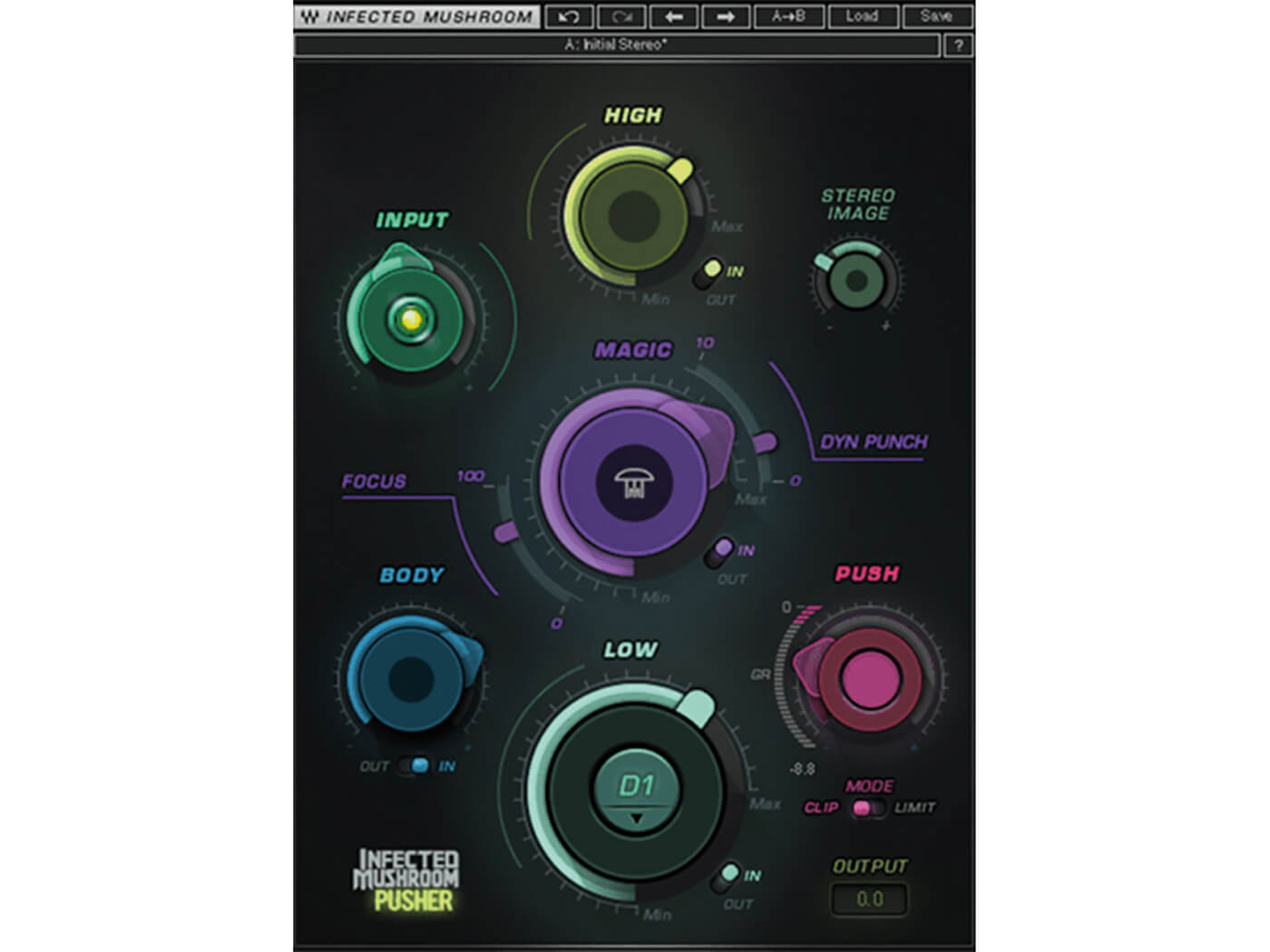 Designed exclusively for Waves by electronic-music duo Infected Mushroom, this plug-in encases the act’s special mastering chain in a single plug-in with a simple interface. As well as allowing broad-brush enhancements to low, middle and high-frequency ranges, the plug-in also provides stereo-image adjustment and dynamics processing.