With Eventide Audio’s savage distortion effect now available as a plug-in, is this yet another unremarkable addition to a saturated market – or does it crush the competition? 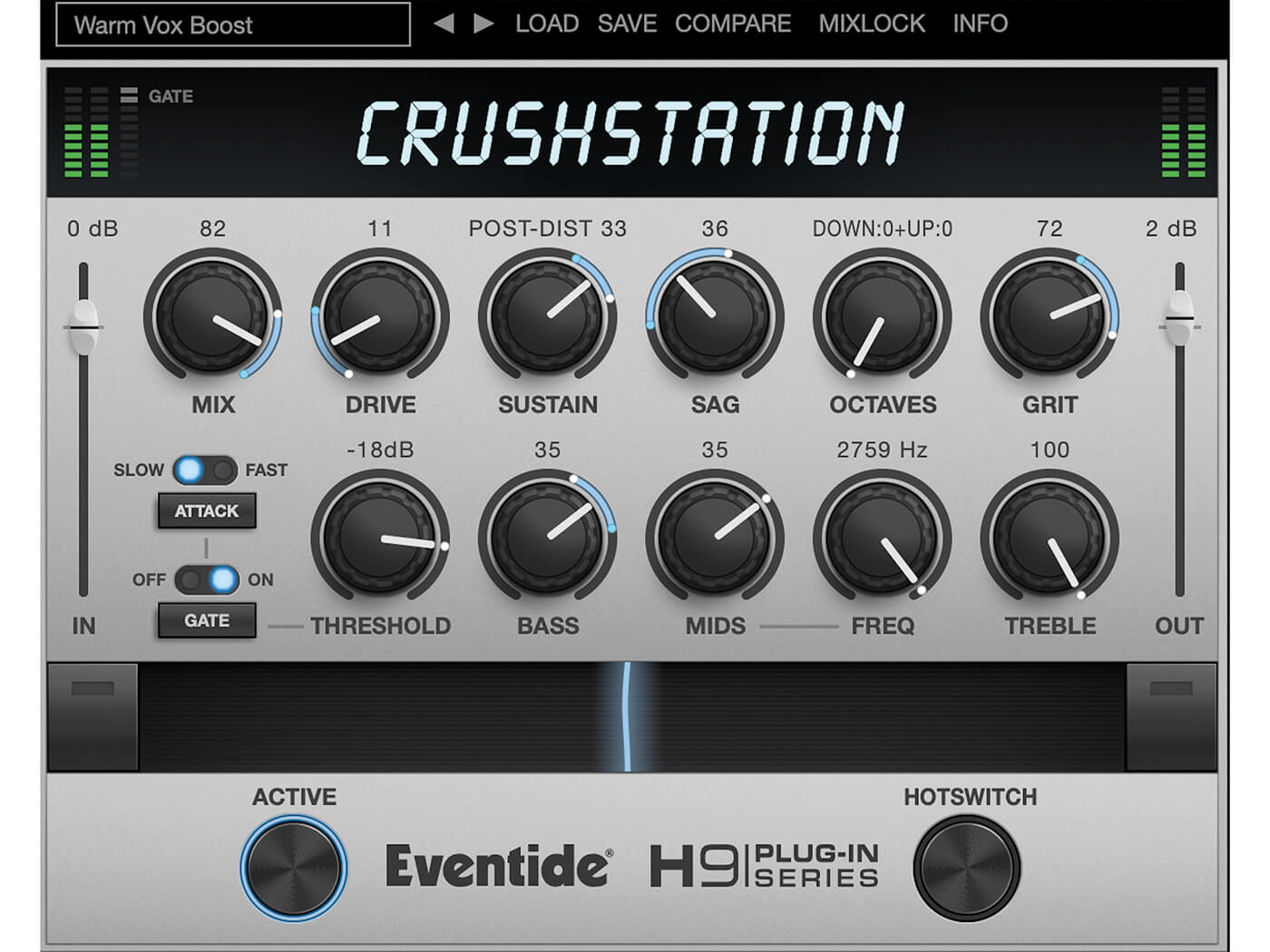 Ask most producers and they’ll say that you can never have too many distortion and saturation tools. From pedals to plug-ins, the proverbial table may be strewn with superficially similar options but each design brings something different to it. Now, New Jersey-based maker Eventide Audio is hoping you’ll clear some space on that table for its own unique take.

CrushStation is a distortion unit whose algorithm is based on that of Eventide’s H9 Harmonizer pedal. As such, the plug-in offers a range of sounds, from smooth saturation to savage sonic destruction. But this is more than a mere one-note effect. CrushStation also features a 3-band EQ, compression, octave mix and a Sag control to emulate the sounds of failing hardware. Is Eventide primed to render all other distortion tools obsolete?

Pedal to the metal

CrushStation is available as a plug-in for your DAW, as well as an effect for iOS. Installing it is relatively straightforward, and authorisation comes via an iLok account. The GUI follows the Eventide template set by other effects such as UltraTap and Blackhole, with a layout that’s half plug-in, half effects pedal.

Everything is crisp and clearly labelled, including the input and output volumes, drive, 3-band EQ with sweepable mid, and, ix control for parallel processing. There’s also a Mixlock button that fixes the mix dial in place, useful for using the effect on a bus when sweeping through presets. The 35 varied presets showcase everything that distortion as an effect has to offer, including gnarly, gritty, pitch-manipulated and softer sounds.

CrushStation’s one-knob compressor/sustainer is labelled Sustain, and can make overall loudness more consistent. Turn it to the left to affect the signal pre-distortion, and to the right to affect it post-distortion. The Sag control models the crushed and broken sounds of dying tube circuits and, at high values, starts to cut off the tails, making it well suited to creating tight, crunching sounds. The Octave effect allows you to add in pitch-shifted notes at one octave above, one octave below or both, to help thicken the sound. This thickening effect works best on clean and well-defined lines, such as those played on a synth or bass, as well as vocal parts, adding an interesting layer of detail to proceedings.

The lower octave is mono but the upper octave has a wider stereo effect to help it sit better in the mix. For the sake of flexibility, it would’ve been nice to have the option to solo these sounds and bypass the original pitch but that’s not possible here. There’s also the Grit dial, which drives more low end into the distortion to make for a heavier and more chugging sound, and a gate, which can control the attack speed via its threshold control and is great for reining in the noise floor, especially on shorter, percussive sounds.

Like the barnstormingly good Blackhole plug-in that came before it, CrushStation conceals a few unique performance features up its bit-crushed sleeves. The Ribbon slider at the bottom of the GUI allows users to sweep between two completely different settings. You could use this to set up some lively transitions. For example, dark and warm saturations can be engineered to sweep up via the EQs and evolve into bright and smashed distortions.

The slider is essentially a macro dial that has perhaps been laid out in such a way as to make it more playable on iOS devices. Whatever the reason for its presentation, it works. Users can jump instantly between two settings using the Hotswitch feature too. Both the Ribbon slider and Hotswitch function are useful additions that can lend your sounds some movement, and they’re ripe manipulation. There’s no reason you couldn’t tweak these and put them to use as sound-design tools too.

Though CrushStation follows the layouts and features of its predecessor Eventide plug-ins, and is mostly well considered, its lack of LFO feels like a missed opportunity. An LFO could lend CrushStation even more scope for creating smooth morphing sounds as parameters sweep between settings. Still, we’re grateful for the macro dial-style Ribbon slider. It’s not often you see such settings on distortion effects. 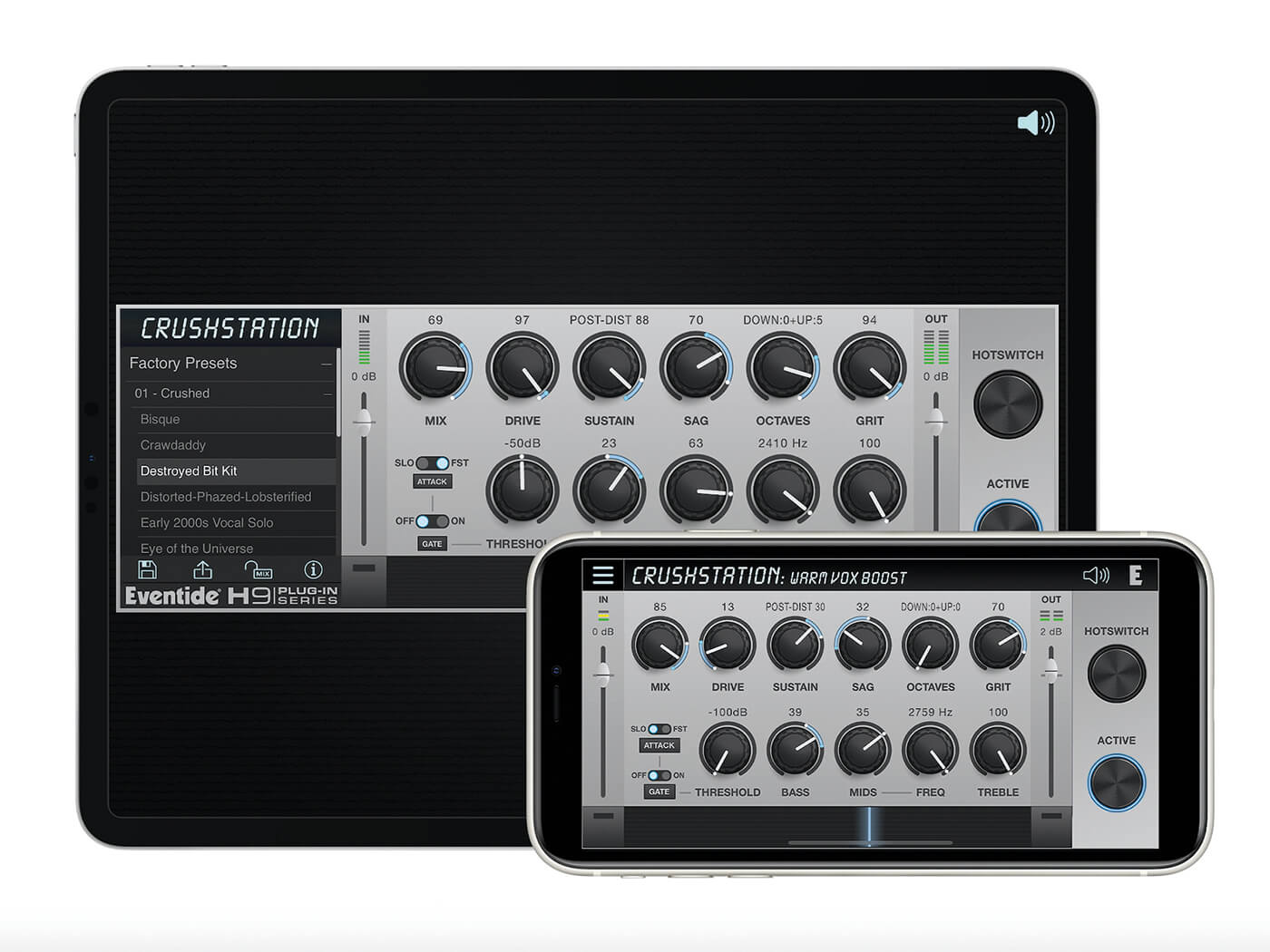 If you’re the kind of producer that likes to squeeze audio within an inch of its life to see what kind of details are buried within it, you’ll get a lot from this plug-in. By adding CrushStation to selection of different drum loops, we were able to tease out the long rasping tails of snare hits and make hi-hats pump perfectly with the beat. This plug-in is a wonder when it comes to injecting much-needed character into drums and percussive sounds. It also excels at adding in-your-face fuzz to guitar and bass instruments, and subtle sizzle to the likes of keys.

If it’s warm and analogue-sounding saturation you’re after, however, look elsewhere. There are other options that do this much better. Though you can create warm saturation by fine-tuning CrushStation’s drive and EQ, it doesn’t have the break-up or resonances that you get from pushing some other modelled plug-ins. For grit and crunch though, this is a superb processor. Eventide’s combination of controls and effects ups the plug-in’s potential for varied and refined results, whether you’re simply adding a little low-end weight to snare drums or crafting a wild, screaming, double-octave bass tones.

Though it’s tough to compile too many flavours of distortion, it’s best to consider your options before committing to any given plug-in or pedal. The precise type of music you’re writing will likely impact whether you want a tool that works best for warmer sounds or one more attuned to aggression.

Though CrushStation can just about do subtle distortion, being understated isn’t really its forte. But if you want hardcore fuzz and all-up-in-your-grill grit, alongside some bonus creative shaping tools thrown in for good measure, this is a must. The Octave, Sag and Gate controls make this plug-in a tool that’s more flexible than many, and its sound-design capabilities should ensure you get your money’s worth from it. 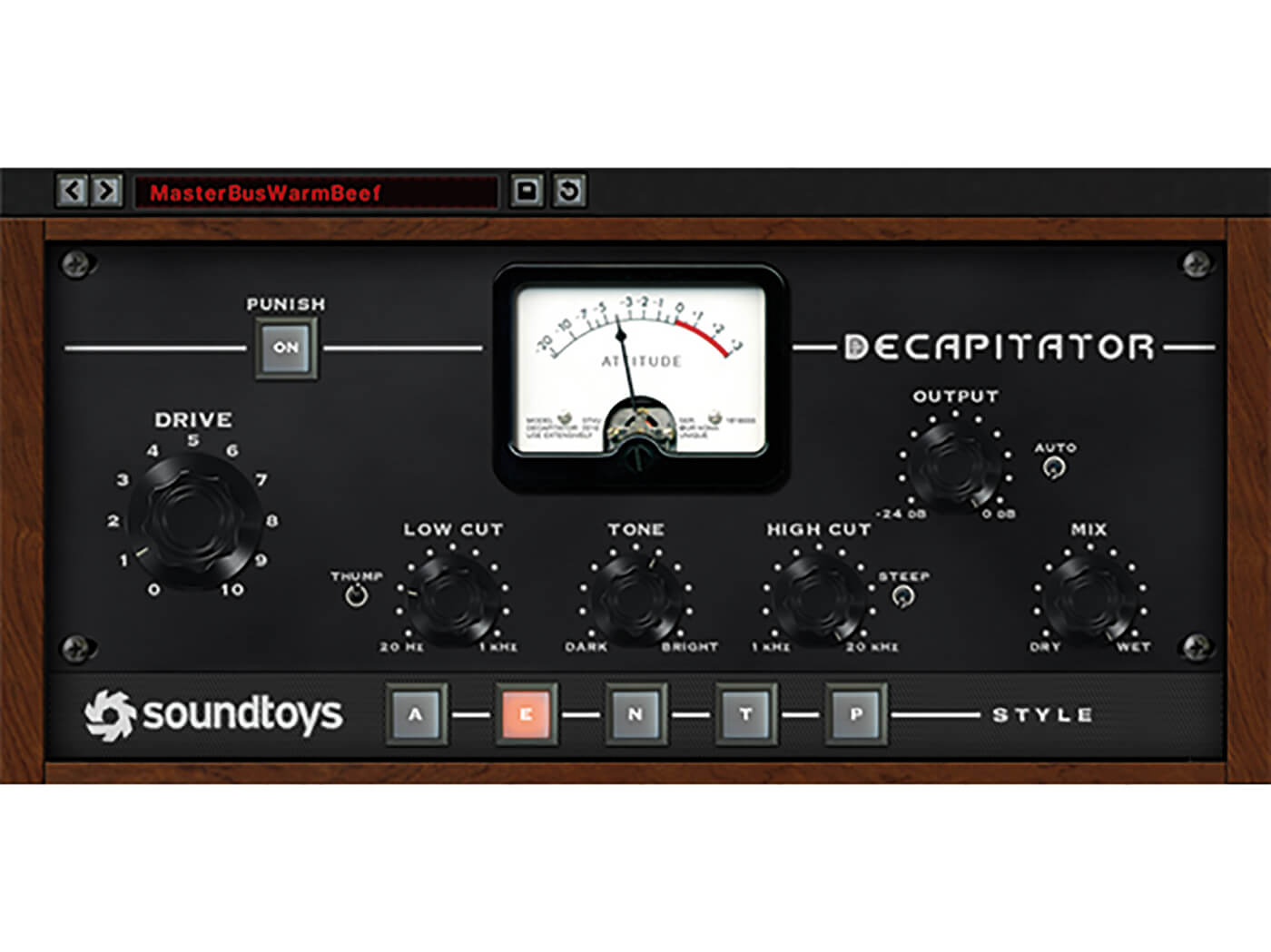 Still a go-to saturation box for many producers, Decapitator isn’t as versatile as CrushStation but it features five circuit models for more analogue-sounding saturation. Look out for sales and bundles to grab it at an even cheaper price. 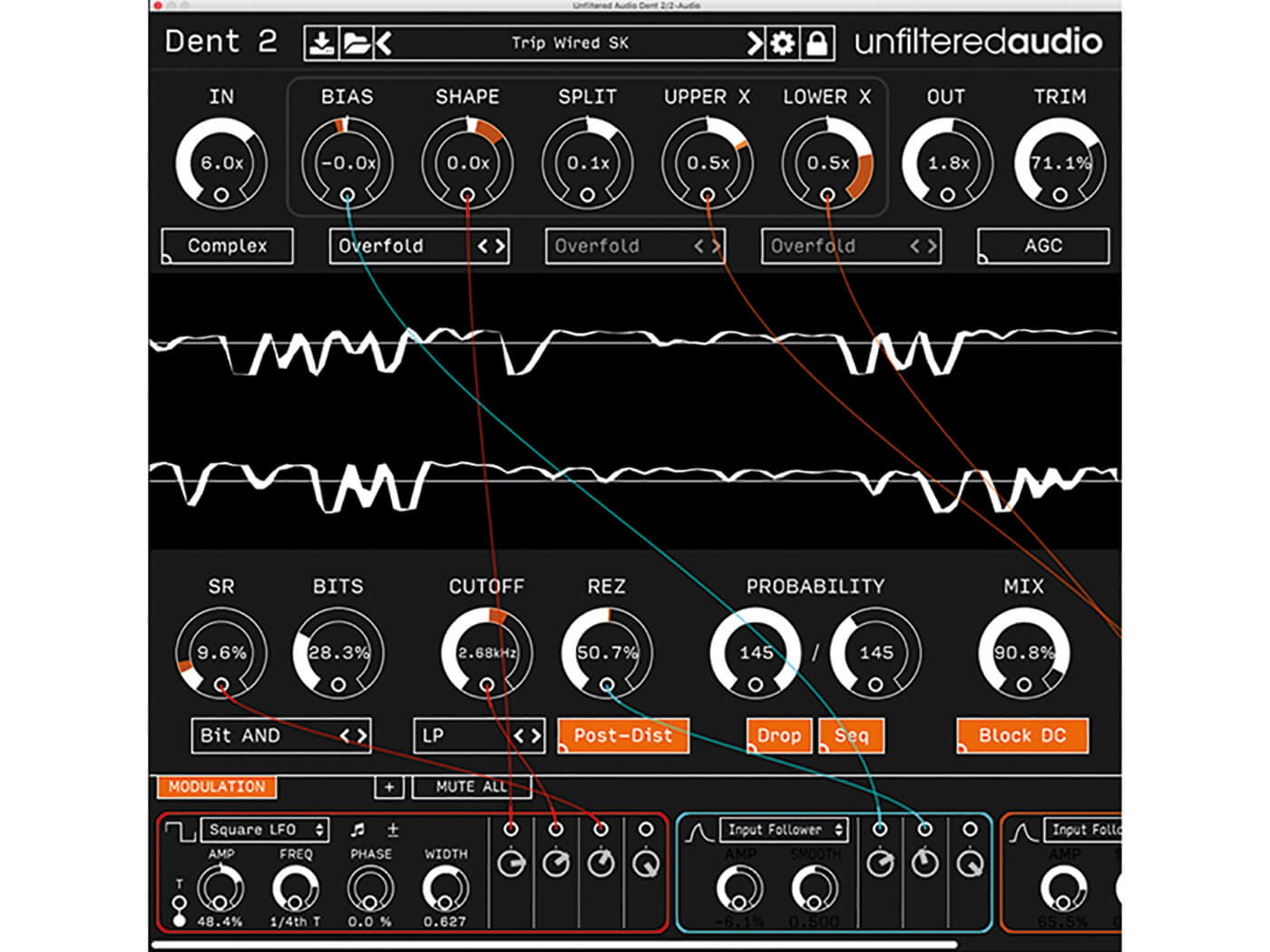 A deep digital distortion with masses of control and a complex and flexible modulation system that includes LFOs, envelopes followers and step sequencers, Dent 2 is a sound designer’s dream. It’s sensational at glitchy crunch sounds but less warm than CrushStation.