With the RM series, Pioneer has entered the monitor market with some aplomb. Jon Andrews investigates both models in the range… Details Kit RM-05 & RM-07 Manufacturer Pioneer Pro Audio Price RM-05, £429 each (street); RM-07 £569 each (street) Contact Pioneer, 0208 836 3500 Web www.pioneerdj.com When it comes to music tech, Pioneer is right up there, with […] 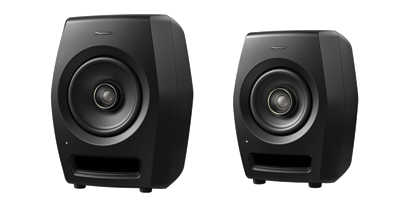 With the RM series, Pioneer has entered the monitor market with some aplomb. Jon Andrews investigates both models in the range… 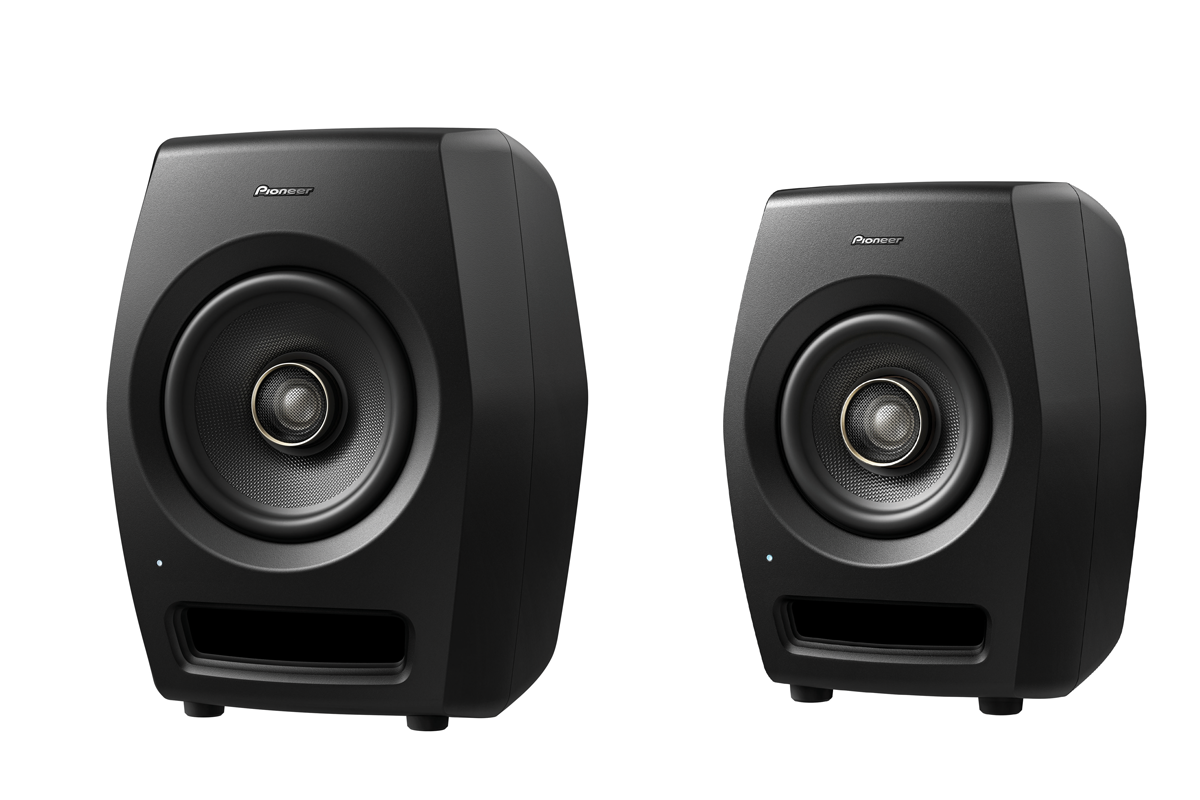 When it comes to music tech, Pioneer is right up there, with its DJ technology range of turntables, controller, mixers and headphones. Plus, the company also has a great rep in the club/pro audio sector with live speakers and amps. However, in the studio sector, Pioneer has been lacking… until now.

The RM series of pro studio monitors has been designed from scratch for mixers and producers and, on the face of it, no compromises have been made. They’re not cheap, they have a very distinct design and they also boast specs that other, more established studio-monitor manufacturers have been striving for. On paper, then, the RM series could be real contenders in a hugely crowded studio monitor market.

Pioneering Design?
It’s hard not to think of monitors from the likes of Genelec when you look at their coaxial design – which has TAD (Technical Audio Devices Laboratories) technology applied in its design – where both woofer and tweeter are placed on the same axis.

As well as saving space, this design ‘ensures a truer response across the frequencies.’ The diagrams on the Pioneer website imply that the signals reach the listener from both drivers at the same time, which is not the case on traditional monitors, apparently (although some would argue that correctly placed standard monitors will deliver this).

The enclosure, too, is designed from the ground up, with an aluminium structure for high rigidity and low resonance and a curved surface to reduce external refraction.

Another couple of less obvious design features have also been included: the AFAST (Acoustic Filter Assisted System Tuning), which is an acoustic tube built into the cabinet to help absorb standing waves, which should equal more accurate lows and mids; and a front-loading bass reflex system, with grooves on the inlet to reduce air friction and improve bass response ‘even against walls’. Finally, there are three bands of EQ to adjust on each set, plus a level dial.

We’ll hear how effective these features are in a moment – but the resulting design is distinctive, and you may or may not be taken in by the looks. We rather like them, though.

On Test
With the RM-05s, the first thing you notice is the weight versus the size –these things are hefty. With their brushed matte surfaces, the cabinets do tend to mark easily, too.

Setting up is straightforward, though. All the controls are at the back, including a useful standby switch, which shuts the monitors down after 20-odd minutes of no use. The aforementioned three EQ bands each have four adjustable increments, while a level control offers little in the way of accurate balancing – you can line up the dial by eye with the -6dB level notch, but that’s as precise as it gets.

On first listen, we were taken in by the big sound; again surprised by the impact versus the size. Initially, we thought there was a little too much emphasis in the lower end, but this didn’t translate to a couple of mixes we’d been working on for a while and mixed on a vastly more expensive set of speakers (to perfection, naturally!) and our reference phones (just for good measure). Indeed, the mix translated well to the RM-5s, and we could hear all the detail we expected and little colouration down under.

On our reference tracks, there was a fraction too much there, but after adjusting the EQs on each (we tried notching down a dB on both low and mid controls) we found a decibel down on the mid got us where we wanted to be. On returning to that mix, yes, we were happier with this adjustment, too. 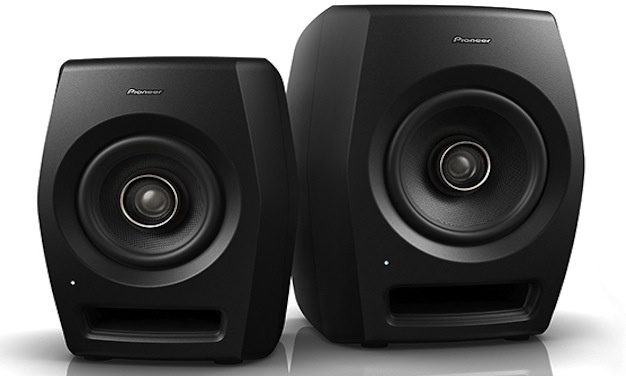 At NAMM, we were taken in by their flat sound, even under show conditions. This wasn’t quite repeated in our environment, but the adjustments are there to be made. So be prepared for a little calibration according to your working environment – as you always should be, of course.

The RM-5s performed pretty admirably. We liked the imaging, getting immersed in the mix we were working on in that pleasing, non-tiring way, spurring you on to extra tweaks and nudges that good (okay, sometimes just different) monitors encourage you to do.

The RM-07s
On to the RM-07s, and initially, it seemed like a case of more of the same, but larger. Controls are identical, as is the easily marked finish. We set them up with exactly the same levels (well, as close as we could with the inaccurate control) and found them to offer a similar experience: immersive, big and with great imaging.

However, A/B-ing speakers is always a joy – you really do get to hear differences that you don’t expect to, and with both speakers in for test at the same time, it became part of the testing process.

You won’t be surprised to hear that the larger monitors performed more succinctly lower down. Their specs tell you why, extending down to 40Hz, but they don’t reveal the full picture, which is a slightly cleaner one.

There’s a little less muddiness around the 40 to 150Hz region on the 7s which meant that we could pick out things in our mix that we couldn’t quite reach with the 5s. It’s not a case of being able to hear things on one that you can’t on the other – just a very subtle edge on them that could mean reaching into the mix for a precise tweak here and there.

What it also did (and this could have been as a result of the extra size of the image and sound) was lift the mix a little. Compared to the 05, it is just a tad more airy and in your face – in a good way! We also didn’t feel the need to reduce the mids by that 1dB, but obviously this will be a very personal thing, based on your environment.

Alternatives
Crikey, you want alternative monitors? Are you serious? At this price point there are (quite literally) hundreds. We wouldn’t be surprised if our parents started making monitors, so popular a pastime it seems to be. Anyway, for similar money to the 7s, check out the Dynaudio BM Compact MkIII set-up and also the MunroSonic Egg100 system.

In-Use Tips
No such arguments about using the RM series in a vertical or horizontal way. As they use a coaxial design, there is no advantage to placing them on their side – indeed, you’d have a job, as the angled nature makes it impossible!

As we say in the review, you might be surprised by the weight, but once you’ve placed them you needn’t touch them again, so we’re not taking marks off for that. Both sets of speakers also come with enough feet and rubber pads for a certain amount of angling wherever you put them – nothing dramatic, just slight – and the rubber pads will also cut down on speaker vibration when used.

Go Larger
We always say: spend what you can on monitors to give you the most accurate sound. So if one speaker in a test like this has the edge – even a small one, as in this case – we will say ‘go for it’.

The RM-07s do cost an extra £200-300 a pair, but it’s money well spent. Even though the RM-05s performed decently enough, the 07s, in direct comparison, give you extra cleanliness and accuracy, plus a more balanced sound. But both signal good intentions from Pioneer and possibly a more ‘studio’ future for the company, which we look forward to… 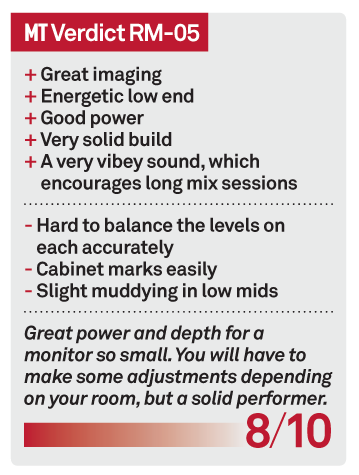 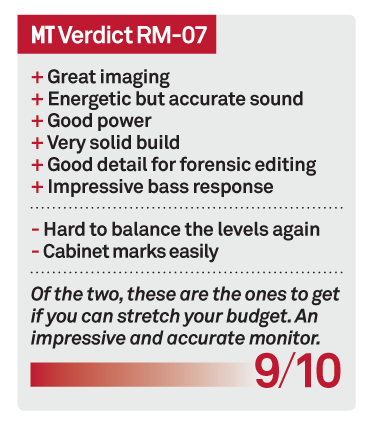