Is your music missing a pulse? Mark Cousins finds out if Output’s SIGNAL can add a harmonic heartbeat to your sonic work… Details Manufacturer Output Price £159 Contact outputsounds.com Output first came to our attention with REV, an intriguing Kontakt-based virtual instrument, focused solely on the idea of reversed sounds. By concentrating on a niche […] 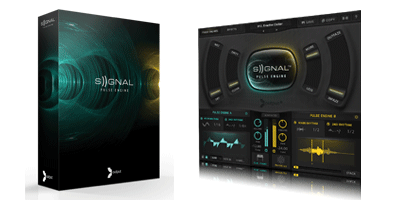 Is your music missing a pulse? Mark Cousins finds out if Output’s SIGNAL can add a harmonic heartbeat to your sonic work… 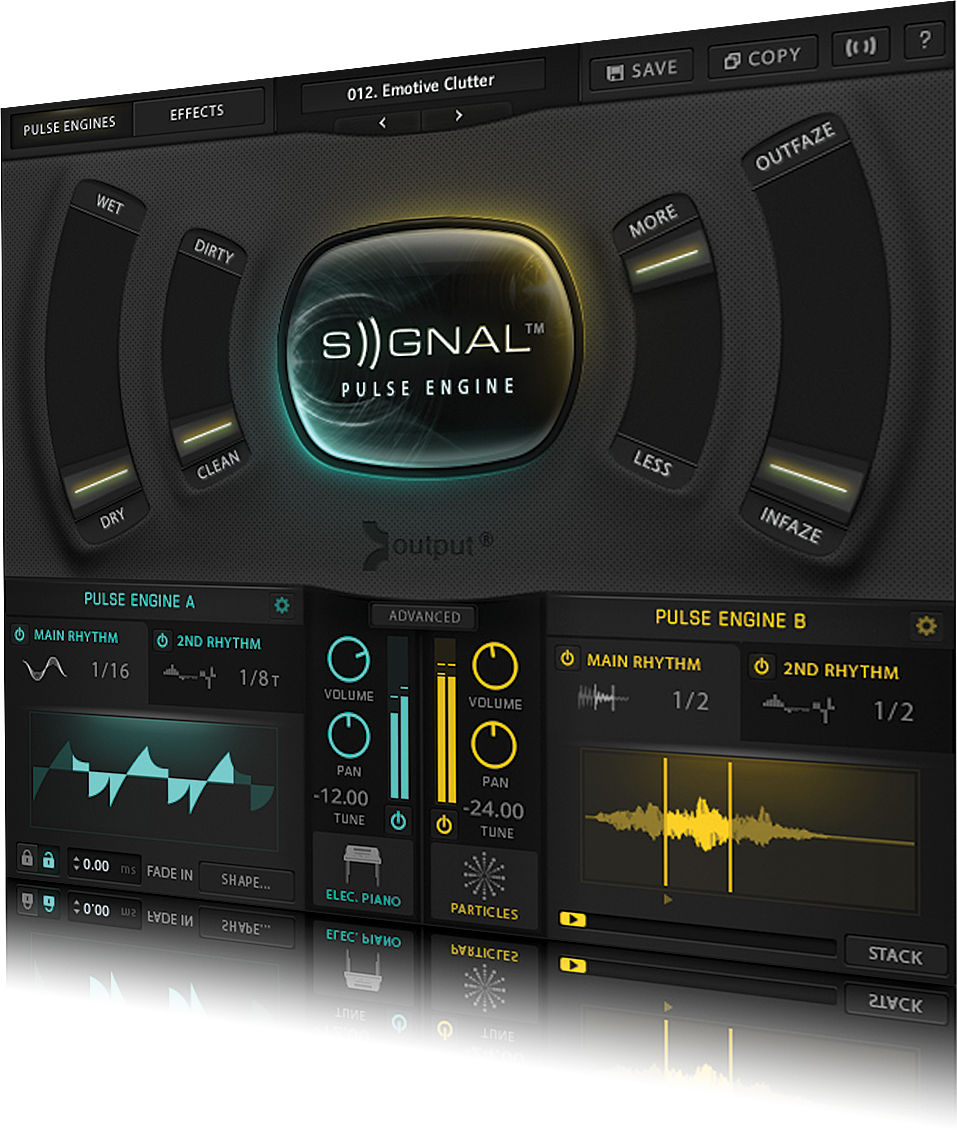 Output first came to our attention with REV, an intriguing Kontakt-based virtual instrument, focused solely on the idea of reversed sounds. By concentrating on a niche sound type, Output could develop a wealth of content and a custom-designed interface that really addressed the ‘reverse’ concept. As such, REV was both a beautifully designed instrument and an inspiring tool with a wealth of musical potential.

Having made such a promising start with REV, though, how could Output further define its unique approach to virtual instrument design?

SIGNAL is Output’s latest offering, this time shifting its focus towards ‘pulsing’ sounds – whether it’s a chugging synth bass, abstract glitching effects, or swirling arpeggios. If you’re familiar with some of the tempo-synced sounds on instruments such as Absynth or Omnisphere, you’ll be at home with what SIGNAL has to offer.

These pulsing sounds have also become a cornerstone of cutting-edge cinematic scores, such as Junkie XL’s Mad Max: Fury Road, as well as being a popular musical element in a range of electronic styles.

Signal Box
To understand the fullness of what SIGNAL has to offer, it’s well worth taking a closer look at the technical background behind the instrument and how each SIGNAL patch is created.

The starting point is a series of sound sources, covering both acoustic/electric instruments – including electric guitar, bowed piano and distorted guitar – as well as a range of synthesiser-based sources. Two sound sources can be layered in each patch, letting
you explore the hybrid possibilities from layering the various different sound elements.

The creative possibilities of SIGNAL get really interesting when you factor in its Pulse Engines. Put simply, the Pulse Engine is the key feature that brings SIGNAL’s presets to life, adding various forms of movement and development within the patch. Technically speaking, the Pulse Engine works in four different available modes – Step, Arp, Loop and Wave.

The Step and Arp modes should be reasonably familiar, covering various arpeggiation modes, based on either single held notes or chords, while the step sequencer offers a series of CV sequencer values that can be mapped to various parameters within the Pulse Engine. 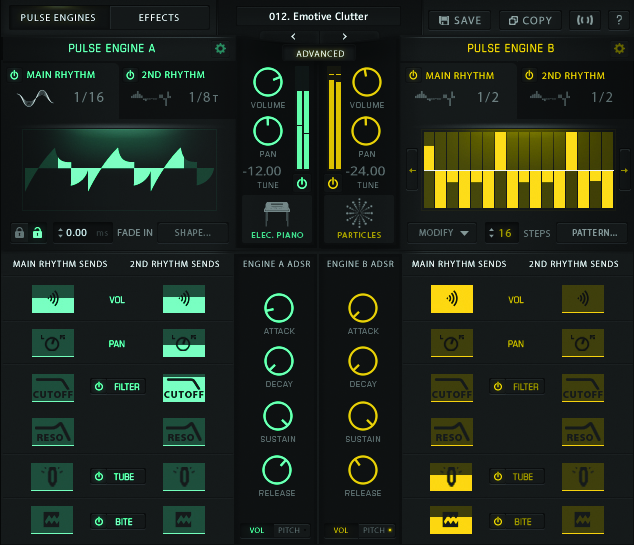 Finding the Pulse
One of the more intriguing Pulse Engine modes is the Loop mode, which could be described as a form of sample-based pulsing. In effect, the Loop mode works by setting a time period for a loop that’s placed over the sample data – such as a 1/16th section, for example.

As well as setting the time period, you can also specify the placement of the loop, which can have a dramatic effect on some of the percussive sound sources (effectively ‘cutting into’ the note), or a more subtle result on the sustained sound sources.

Another key concept of the two Pulse Engines is that two rhythms can be applied per layer, letting you build up hybrid combinations of the various modes. A simple 1/4th loop effect, for example, could be layered with a 1/16th step sequencer, adding stepped filter movements.

Likewise, a fast-moving 32nd arpeggiator could use a slow-moving LFO-like Wave mode to spin the sound around the stereo image. Couple this with some contrasting syncopated effects on the second engine, and you can soon see how SIGNAL becomes musically complex and interesting to the ear.

Macro Fun
If this technical description of SIGNAL’s sound-shaping tools is starting to sound too complex, it’s worthwhile pointing out how much of SIGNAL’s design ethos revolves around it being an intuitive, easy-to-use software instrument. This begins with an impressive array of preset content that’s navigated away from Kontakt’s own instrument navigation system.

As a result, SIGNAL has just a single Kontakt Instrument setting, from which its own preset navigation screen can be found. Patches are attributed with a range of pulse-specific tags, letting you find the right sound quickly and easily. While it’s possible to build a patch from the ground up, it’s largely the case that most users will start with one of the 500 or more included presets. 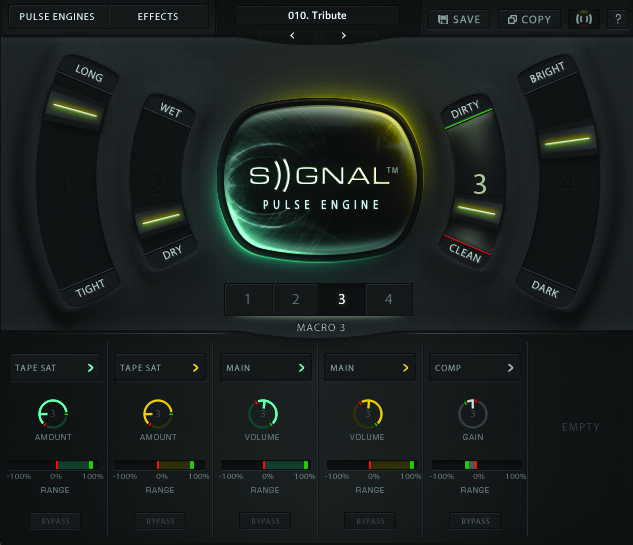 At this point, SIGNAL’s large macro controls, that dominate the user interface, really come into play, letting you tweak the presets in a musically-dynamic way: whether it’s radical filter movements or subtle sweeps between the different rhythmic layers.

Rather than over-playing SIGNAL’s full parameter set, the interface adapts as you delve deeper – first to the top layer of the Pulse Engine, and then to its full glory when you open the Advanced controls. In short, some users may never reach SIGNAL’s full programming depths, while others will relish the ability to tweak to their heart’s content!

If nothing else, it’s well worth a good peruse through SIGNAL’s presets to see just how much can be achieved with this unique instrument. Many of the presets illustrate how the various Pulse Engine layers can work dynamically, either combining contrasting sound elements – such as a gritty synth with harp harmonics – or syncopated rhythms that seem to dance between the two Pulse Engines.

One key component in many of the sounds is SIGNAL’s in-built effects section, which is often used to provide much of the bite, body and drive in SIGNAL’s output.

Alternatives
Omnisphere 2 (£285) is one of the most popular choices for these types of pulsing sounds, with a number of features – including an arpeggiator, rate level envelope generators and a step sequencer – that work well in this application.

Technically speaking, Omnisphere 2 doesn’t include the Loop function found in SIGNAL, but it does include options such as Granular Synthesis and the ability to import your own sample data. There are also other Kontakt-based options, including Sample Logic’s ARPOLOGY ($399), which uses a combination of an arpeggiator and step animator to create distinctive pulsing effects.

Signal Free
If you want to experience some of the possibilities of the Pulse Engine, Output has released a version of SIGNAL called SIGNAL FREE (http://outputsounds.com/products/signal-free), which includes the full Pulse Engine, 25 presets and four sound sources.

If you run the full version of Kontakt, you have unrestricted access to SIGNAL FREE. Users of the free Kontakt Player will experience a 15-minute time limit, after which they’ll need to open and close Kontakt to carry on. 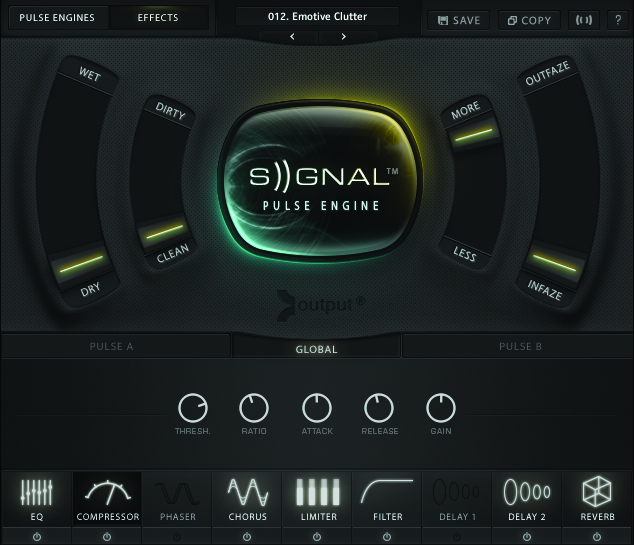 Skip a Heartbeat
Like a number of contemporary Kontakt-based instruments, SIGNAL’s interface is a masterpiece of elegance and functionality. Despite its complexities, SIGNAL remains clear and clean, whatever layer you decide to operate on – whether it’s tweaking a few simple macros, or exploring the real depths of the Pulse Engines.

Neat touches – such as the range of preset patterns in the Step mode, or the in-built help system – show that the user experience has really been considered, and that, most importantly, SIGNAL is designed to be quickly and easily edited.

Even with these elegant and intuitive design touches, SIGNAL is still a vast instrument, so new users should definitely watch the YouTube tutorials before jumping in!

Sonically speaking, there’s a wealth of bounty included in SIGNAL, that will keep many soundtrack composers or EDM producers happy for hours. While other instruments (such as the aforementioned Omnisphere and Absynth) cover similar areas, there’s little doubt that SIGNAL’s focused approach lets you find the right type of pulsing effects quickly and easily.

We were also impressed by just how playable many of the sounds were, often making good use of SIGNAL’s arpeggiator and macro controls so that the sound ‘lives and breathes’ underneath your fingers.

While it’s hard to criticise something as well constructed as SIGNAL, there are a few points worth noting. In an ideal world, the ability to import your own sample data would be welcome, as illustrated by this type of functionality now being included in Omnisphere 2.

Although the included sound palette is undoubtedly wide, it might be interesting to see further sound source elements added, maybe even with add-on libraries like the existing

Tape Loop and Cinematic patch expansion packs. Ultimately, the Pulse Engine has loads more to offer, so it would be interesting to see how it would behave with an even greater range of sound source content.

As with REV, therefore, SIGNAL demonstrates that the developers working at Output have a keen eye on contemporary sound design and the sonic needs of many composers and producers working in the field of electronic music.

From the imaginative, carefully-curated sound sources through to the intricacies and flexibility of the Pulse Engine, SIGNAL is an instrument that’s designed to deliver a wealth of inspiring and intriguing sounds. 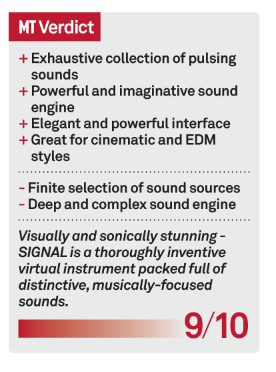