Only 500 of these will ever exist, so does it really matter what Andy Jones thinks of Novation’s latest synth? It would have his name on it if Giorgio hadn’t got there first, though… Details Price £319.99 Web novationmusic.com Contact T: +44 1494 462246 – E: sales@focusrite.com Compared to the guitar market, the world of hi-tech […] 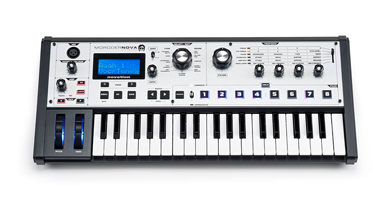 Only 500 of these will ever exist, so does it really matter what Andy Jones thinks of Novation’s latest synth? It would have his name on it if Giorgio hadn’t got there first, though… 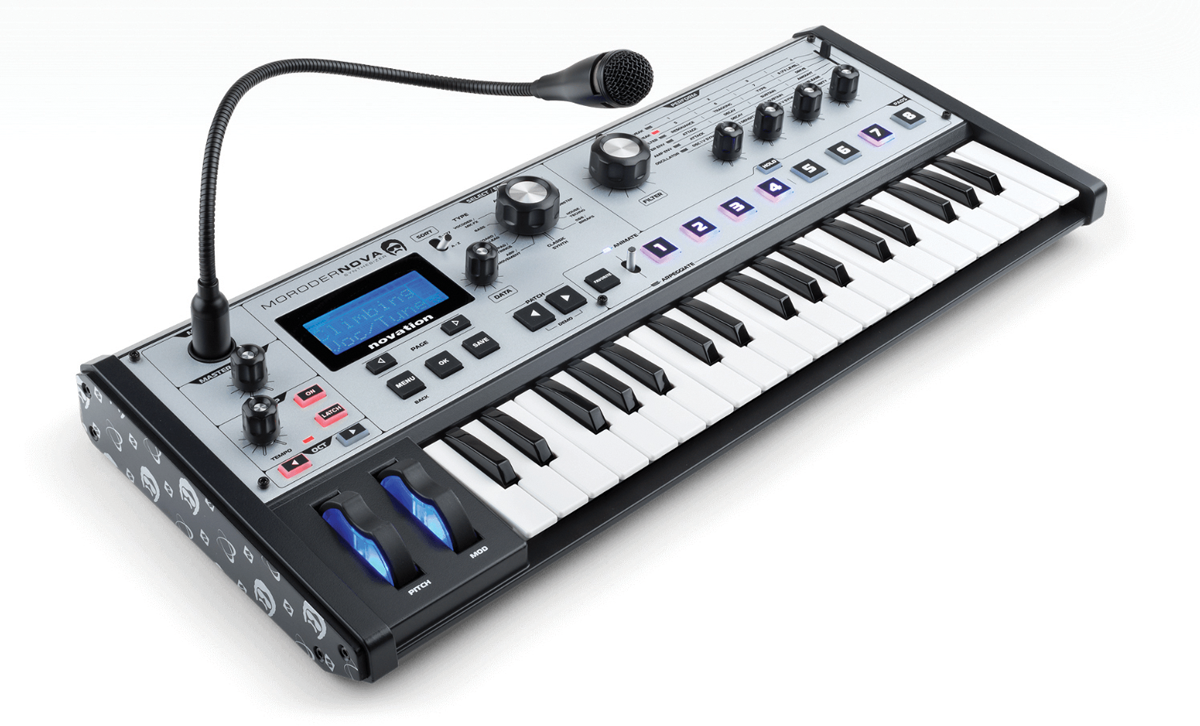 Compared to the guitar market, the world of hi-tech studio gear is sadly lacking in signature models. This is because some people – not me, by the way – think synths are not as sexy as guitars. Nor are there as many big names to endorse them (although I will come up with a few ‘great’ ideas at the end of this review).

That looks set to change with the Novation MoroderNova. This limited edition MiniNova might not actually be signed by Giorgio Moroder, but it does have a new Moroder-inspired livery, his trademark moustache and specs logo, and comes packed with sounds that backed his iconic recordings.

We reviewed the original MiniNova a couple of years back and were impressed: “MiniNova is a great little synth, portable and flexible enough to be used in a variety of studio or live performance situations.” And while the original may be a couple of years old, the new model refines it and gives it more of an identity than the original, as we shall see…

So, you get 256 presets, some proper hands-on controls including a massive frequency knob, and four smaller rotaries to dial through six very obvious sets of parameters – from oscillator to FX. Never has performance control over a sound been so easy. With such obvious real-time tweaking, you know where this synth is going. It’s small, but designed to give a huge sound and – if we’re honest – a huge dance sound.

But adding Moroder’s name to it instantly seals the deal, and almost defines its place in the market. He is one of the godfathers of dance music – ask any of today’s top producers and they will tell you that I Feel Love is an iconic dance tune (and if they don’t, they are lying).

So, packed into those 256 sounds are categories for house, dubstep, R&B and D&B.

For the most part, these are great; some are a little dated of course (this is dance, darling, some are so last Wednesday), but the real-time controls liven up and update many of them, so don’t worry too much. Besides, it’s the extras you want to read about…

Before those, I must touch on the vocoder – there’s a gooseneck mic included – as we were a little dismissive of it first-time round, saying the effect was a little outdated. But now I’d argue that the vocoder section of the MoroderNova is more relevant than ever.

Giorgio might not be known so much for vocoders as sweeping bass, but the effect is certainly part of the wider Moroder future world of big sounds, big love and big melodies, inhabited by protégés Daft Punk, Sparks, Kylie et al, so arguably sits here better than on the original. I bet Moroder has robot servants, too…

I Feel…
But of course the big selling point of the MoroderNova – aside from its unique design – is the dedicated bank of 30 Giorgio presets crafted by the Novation programmers to reflect some of his finest pop moments. Predictably, they open with that sound (called I Feel Bass) and cover the big sounds from obvious gems including excellent basses and leads from Sparks’ Beat The Clock and Berlin’s Take My Breath Away.

But it’s not just the obvious hooks; you also get percussive effects from I Feel Love, and surprising inclusions from Blondie’s Call Me, plus bass sounds from some of Moroder’s themes such as Midnight Express, and just about everything from Flashdance. As an exercise in summing up someone’s career in sonics, it ticks all the boxes.

So MoroderNova is surprisingly successful, and with the Giorgio extras it gels the original synth more, refining its point. It’s fun; it’s compact; it’s garish, colourful, loud and high-energy – camp even – and so it very much sits in the jet-setting world of an international synth icon.

At time of writing it seems that advance order numbers are astonishing, so you might not be able to get a MoroderNova even if you’ve read this far. But if you can, do! It sounds great, looks great and as a unique piece of synth gear, it’s a great investment.

Finally, in being so successful, maybe the MoroderNova might open up the doors to more signature synths? So Novation, Roland, Yamaha, Korg et al, are you listening? 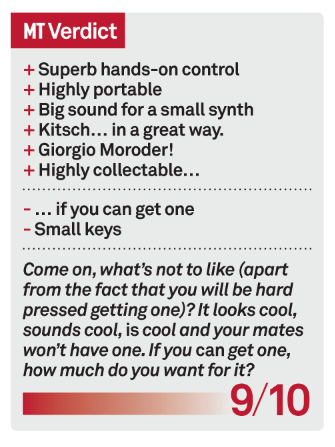