With the possible exception of SSL, Neve must be the best-known name in high-end mixing consoles. Ever since Rupert Neve designed and built his first desks in the mid-60s, the company (now known as AMS Neve) has enjoyed a reputation as manufacturers of state-of-the-art mixing consoles. Indeed, the Neve 88RS console on which this Lunchbox […]

With the possible exception of SSL, Neve must be the best-known name in high-end mixing consoles. Ever since Rupert Neve designed and built his first desks in the mid-60s, the company (now known as AMS Neve) has enjoyed a reputation as manufacturers of state-of-the-art mixing consoles. Indeed, the Neve 88RS console on which this Lunchbox preamp module is based has been described as ‘the world’s greatest mixing console’.

Granted, it’s AMS Neve themselves who make that claim, so it could be taken as mere hyperbole if it wasn’t for the fact that many of the world’s top engineers and producers seem to agree with them. 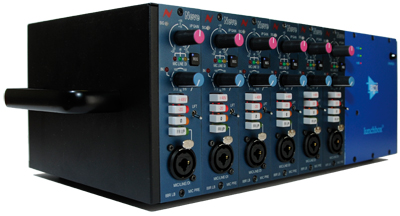 The 88RLB is the latest Neve mic pre released in the 500-Series Lunchbox format, following on from the 1073 released last year. The 1073 is arguably the most famous and revered mic preamps of all time; its distinctive, full-bodied tone has graced many thousands of recordings since its launch in 1970. For this review we were able to compare the more modern 88RLB design to the classic 1073LB module – and the results were very interesting. First, though, let’s take a look at what the newer unit has to offer in terms of features and specifications.

The 88RLB is a transformer-coupled mic preamp that incorporates balanced line and DI inputs and line out. At the top of the unit is a rotary pot for Input Gain that doubles as a push-switch to select mic, line or DI inputs; three LEDs below this show which source is selected. Basic signal metering is provided by an LED that illuminates in green from a gain level of -25dB and red from a level of +25dB. Around the circumference of the pot are two sets of figures showing the input gain for mics (+20dB to +70dB) and line-level sources (-20dB to +20dB).

Below this is a similar pot/switch that controls the high-pass filter, continuously selectable from 31.5Hz through to 315Hz; depressing this knob activates the filter. Four push-buttons are situated below the HPF, allowing the selection of 48V phantom power, a -20dB pad, polarity invert and front-panel input (a Neutrik combi XLR that can take mic, line or DI inputs). The phantom power selector features intelligent switching, activating only when mic sources are selected. If the input is changed to line or DI, power automatically switches off.

To the right of these buttons is a toggle switch marked Lift, which lifts the internal screen from ground when a DI instrument jack is plugged in to the front input, helping to eliminate ground loops. The only other control is a black push-button with REG imprinted in white letters. This is Regeneration and is active only in Line or DI modes, passing the signal through the transformer used in the microphone input circuit to add some classic Neve colour to the sound.

With both the 88RLB and 1073LB sitting side-by-side in the 500-Series rack, we connected a pair of AKG C414s, one to each channel. We had fair idea of how the 1073 module would sound; the classic Neve sound is unmistakable – once heard, never forgotten. Having never worked on ‘the world’s greatest mixing console’, the Neve 88RS, we wondered if the 88RLB would be some sort of über-Neve, with a sound so huge and powerful it would pin us to the backs of our chairs…

We couldn’t have been more wrong. On acoustic guitar, the difference in sound between the two preamps was so vast that we abandoned our original two-mic approach in case the mics (or indeed the cables) were influencing the sound. Settling on just the one C414, we recorded some guitar, first through the 88RLB and then through the 1073LB. Our initial impressions were confirmed: the sound of the two units is poles apart, chalk and cheese. The acoustic guitar through the 1073 possessed the classic Neve sonic signature that we have come to love so much, with a big, bold midrange that is full and fruity, flattering the sound somewhat with its technicolour presentation. No one could accuse the 1073 of sounding bland or even transparent; rather, it stamps its trademark tone on everything in a way that seems to shout: ‘Listen to me! Don’t I sound great?’

By contrast, the more truthful character of the 88RLB portrays the sound of the input signal warts-and-all. Gone was the rounded tone of the 1073, which highlights presence and punch, replaced by a far less demonstrative sound that made us much more aware of the upper frequencies, with sparkling highs melding seamlessly with the broad midrange. Down in the bottom registers a touch of boom, not evident with the 1073, emphasised the fact that the 88RLB does not attempt to favour any part of the audio spectrum. We tested several of our favourite mics with both units and found that the newer model allowed each mic to sing with its own voice in a manner that was far more neutral than the slightly hot sound of the vintage design. Plugging in a bass guitar to the DI input, we were keen to hear the effect of the Regeneration function, which routes the signal through the preamp’s transformer. Although this is designed to add classic Neve colour to the sound, we struggled to hear any difference in the sonic presentation, concluding that maybe there was subtle curtailing of frequency extremes, but not to any degree that would be instantly noticeable to most.

The 88RLB consistently impressed us with its even-handed style, highlighting the characteristics of the mics and instruments rather than imposing its own sonic stamp. Comparing it alongside the 1073 was something of a double-edged sword, as the older model’s highly coloured sound is quite addictive. In a way, listening to the 88RLB is a bit like tasting tea without sugar for the first time. At first you miss the sweetness until your taste adjusts to the true, unadorned flavour, then there’s no going back.

Anyone wishing to own an elegant, premium-quality microphone preamp could do a lot worse than invest in one of these. Sure, it doesn’t deliver the instant sonic fireworks of its iconic stable-mate, but over time it will impress with its honesty, integrity and no-compromise approach to delivering high-fidelity sound.

A fine choice for anyone seeking a full-range mic preamp that lets the character of any source sing true without adding colour of its own.