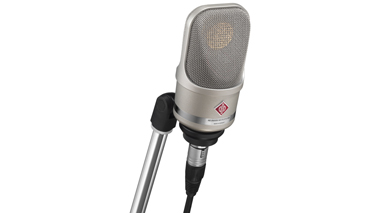 The TLM 107 promises the ultimate in flexibility without compromising that Neumann tone. Huw Price tests…

In a sense AKG’s C414 really blazed the trail for compact, multi purpose, large capsule condensers with five patterns as well as various degrees of filtering and attenuation.

On the face of it, the TLM 107 promises all of the above, and ‘demanding home recording applications’ has been added to Neumann’s more familiar domains of recording and broadcast. We are also promised ‘impressive level stability and low self-noise’.

None of Neumann’s TLM mics features a transformer, so balancing the low impedance, output is achieved electronically. A quick look at the circuit board reveals a mixture of through hole and surface mounted components. But the real departure has been made with the design of the capsule.

Measuring 29mm across, both dual diaphragms are grounded. Applying the polarizing voltage to the internal backplates instead of the diaphragms apparently reduces sensitivity to dust and humidity, which should result in a longer lasting capsule.

Neumann declared philosophy is ‘innovation based on tradition’. The design is testament to this with a mini-me M49 appearance from the front and a dead clever joystick control (navigation switch) for adjusting settings. Toggle it north or south to change pattern, west to set the pad and east to set the HPF.

The patterns include omni-directional, cottage loaf, cardioid, hypercardioid and figure-8. Pads are -6dB and -12dB with bass roll off at 40Hz
or 100Hz. All the symbols are back lit with bright white LEDs, which switch off after 15 seconds, and they’re located on the back to avoid distracting singers.

The TLM 107 is available in black or matt nickel and ships in a wooden box with a stand mount but no suspension mount. Self-noise is given as 10 dB-A and the maximum sound pressure level of 141 dB SPL can be increased to 153 dB SPL with the attenuation engaged.

Vox Pop
We started with vocal tests as we’re most familiar with using Neumann mics for that application. There was a sense of recognition – close mic’d voices had the smooth midrange and larger than life quality that we have always associated with the brand.

It’s a plummy but clear tone that may be familiar to you from the BBC’s classier speech based radio stations. There is also a noticeable treble lift that differentiated the tone of the TLM 107 from many of its large capsule Neumann predecessors. Despite Neumann’s claim that ‘the grille is acoustically optimized for low sensitivity to pop sounds’, it pops nevertheless – a pop shield is a must.

Pattern tests demonstrated that everything was as it should be and output levels remained consistent across all the settings. Addressed from the side in figure-8 the sound produced seemed comprised almost entirely of room ambience.

Large capsules don’t always make for the most consistent of omni patterns, but the TLM 107 sounded the same however it was addressed, with seemingly identical front and back responses and no treble roll off at the sides.

The literature promises sound without any colouration but we’re not convinced. Moving to arms length recordings of acoustic instruments, we noticed a very slight colouration around the 1.3KHz area in cardioid mode. This was also present with the omni and cottage loaf settings, but absent in hypercardioid and figure-8. Moving the mic closer to the source made this characteristic far less noticeable.

Intrigued we put the TLM 107 up against a BLUE bottle with a vintage Neumann M7 capsule. They sounded remarkably similar, midrange colouration included, but the TLM 107 had far more air in the upper frequencies and a crisper, lighter focus in the lows. This sweet treble sparkle is apparent in omni because there’s no proximity effect to fatten the midrange.

Something old Something New
The plus side of buying a microphone from a premium company like Neumann is that stellar sound and build quality should be a given. On the down side you’re less likely to get any tasty extras like a suspension mount or a pop shield.

Neumann does manufacture a compatible suspension mount, but you will need to pay almost £120 on top of the purchase price.

With the TLM 107 Neumann has come up with an affordable ‘Swiss army microphone’ in the spirit of the AKG C414, but without sacrificing the sonic qualities of the brand.

It’s unmistakably a Neumann tone, but free from distortion and tweaked in the top and bottom for more contemporary music production requirements. 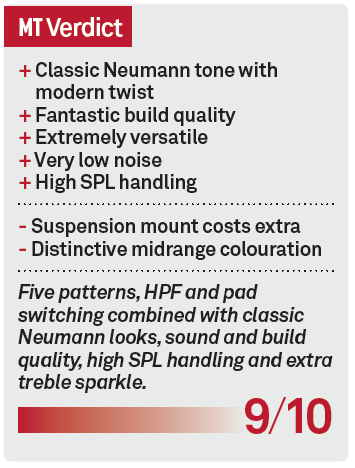