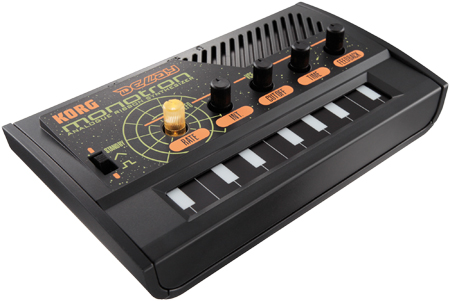 Korg’s latest Monotrons are immediately striking, even before they’ve uttered a noise. Housed in a tiny, lightweight case, the knobs and ribbon keyboard make them look like the new-born offspring of a larger synth. Although initial experiments using the built-in speaker confirmed what we suspected would be a tinny sound, once you plug the output into something bigger you realise these are actually a couple of beasts in disguise.

The first Monotron was released in the summer of 2010, and despite its limitations it became an instant hit. Now Korg has expanded the range with two new additions: the Monotron DUO and Monotron DELAY. Both feature the same ribbon controller keyboard, headphone output and auxiliary input.

First up, the DUO. It has two separate oscillators that can be tuned to different pitches, with a X-MOD knob (taken from the Mono/Poly) that enables you to use the second oscillator to modulate the first and create subtle vibrato or aggressive, FM-style waveforms. An analogue filter based on the MS-20 with Cutoff and Resonance controls follows. A button on the top cycles through chromatic, major and minor scales. Scales can be turned off if you prefer a Theremin-style approach.

Next, the Monotron DELAY. This has a single oscillator with a switchable LFO that controls pitch, an analogue filter (with just a Cutoff control), a four-octave, unquantised keyboard and a Space Delay-style effect with Time and Feedback controls. The LFO can switch between square and triangle shapes, with a trim on the top enabling you to adjust the square pulse-width, and the triangle to an up/down sawtooth shape.

Both units have a surprisingly full and aggressive analogue sound and even the most minuscule tweaks can affect the output, making performance both fun and fluid. By delicately pitching the two oscillators on the DUO you can get subtle unison beating or rich, two-tone electro sounds. Add to that a healthy dose of resonance and the filter will start to break up and scream gloriously.

The DELAY offers up some delicious lo-fi echo effects, from short ringing sounds to longer dub repeats. The fun really starts, though, when you crank up the Feedback to full and gently sweep the Time knob, creating intense pitch risers that The Chemical Brothers would be proud of. In fact, with delicate control of the delay effect and cutoff, the DELAY can also pump out cinematic ambiences. You can also feed in external signals via the 3.5mm aux input and process sounds with the filter and delay.

Although these units are great fun to play with and sound fantastic, there are a couple of issues. Firstly, the headphone output is a bit too quiet, and if you crank it up to full you also get a lot of noise. While this isn’t a major issue when the synth is playing, it could degrade your sound somewhat if you were passing a high-fidelity signal through the auxiliary. Secondly, although we wouldn’t expect a MIDI input in this price range, it really does cripple the units when it comes to live performance, especially as the keyboard is a little fiddly.

No doubt these two units will sell by the bucketload, as they are well priced, fun to play and offer up a genuine analogue sound. Whether they become a staple part of your studio or live setup is another matter. A search online reveals a whole community of people who have modded their Monotrons to accept MIDI, which could make them much more useful. If you just want to add some thick analogue sounds to your tracks or make crazy noises onstage, though, these are well worth a look.

Excellent authentic analogue sounds, great looks and real fun to play, but a bit tricky to use either in the studio or onstage.