If you’ve ever that wished someone would put a whole collection of effects into a single plug-in, then your day is about to get a whole lot better. Hollin Jones puts the beast through its paces… Details Manufacturer MeldaProduction Price €999 Distributor MeldaProduction Contact Via website Web www.meldaproduction.com System Requirements VST, VST3, AU or AAX, […]

If you’ve ever that wished someone would put a whole collection of effects into a single plug-in, then your day is about to get a whole lot better. Hollin Jones puts the beast through its paces… 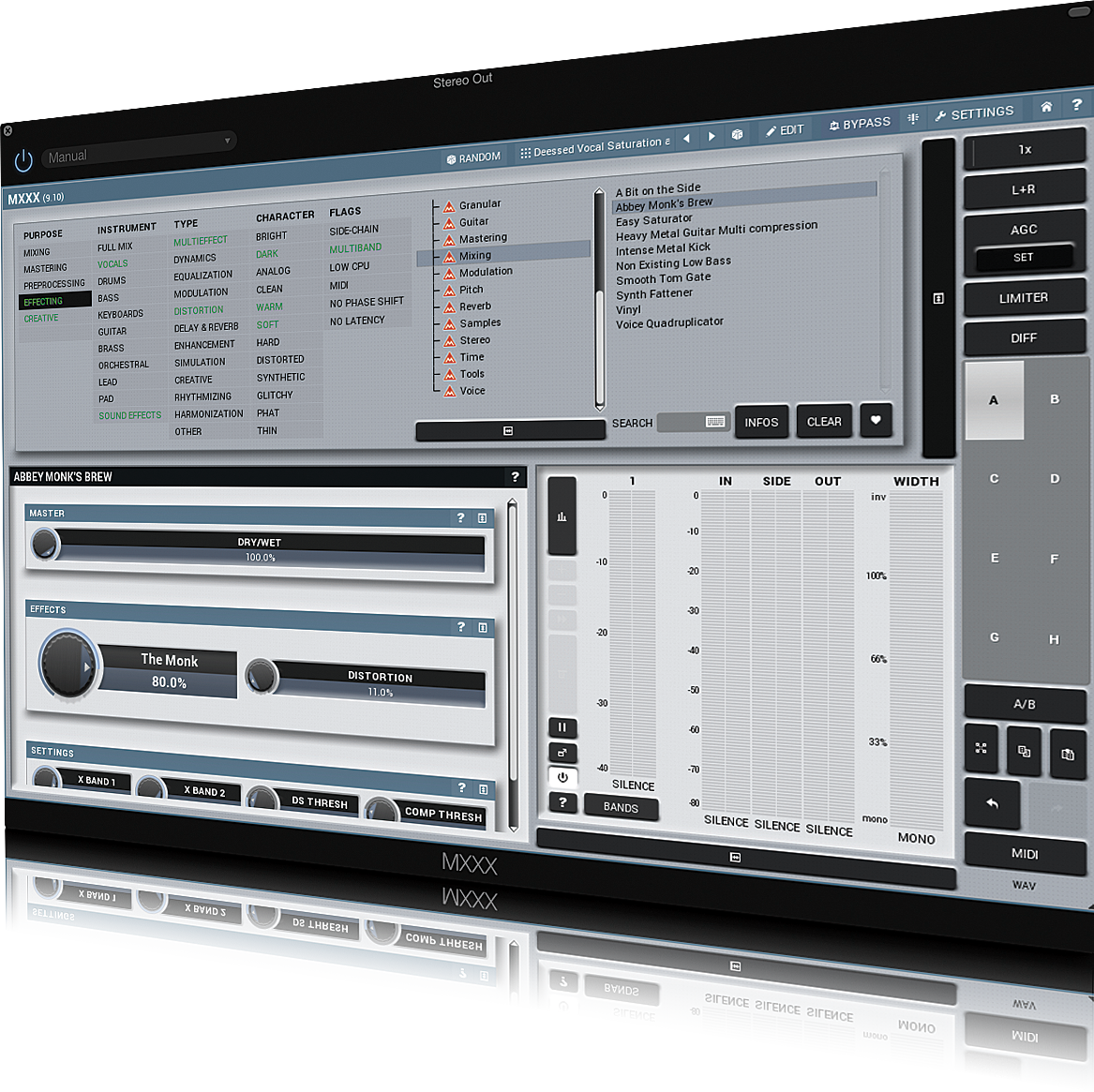 Eventually, it had to happen. MeldaProduction’s lineup of audio processors got so comprehensive that the company developed a new plug-in which places practically all its others in a single package. However, MXXX isn’t just a container, it actually boasts a bunch of features which make it perhaps one of the most all-encompassing multi-effect products ever released. MXXX looks and behaves a lot like many of the plug-ins that

Melda already makes, but the developer has taken the heart of its other effects – though not their interfaces – and placed them inside a modular system. The look and feel of MXXX is familiar if you’ve used Melda’s other products, which is to say that the interface is extremely powerful but does lack a little visual panache.

However, many potential users would, quite fairly, point out that looks have little to do with sound, even if they do bear some relation to workflow. Clearly, a lot of work’s gone into the audio processing side, but for this price a little more visual polish wouldn’t have gone amiss. Slicker graphics don’t make all the difference, but they do lend kudos to a product’s image and reputation.

Load it Up
Visuals aside, MXXX features over 70 of Melda’s audio processors, ranging from dynamics and modulation through to EQ and even the MPowerSynth. It’s priced slightly cheaper than Melda’s Total Bundle, which boasts a few more products – 82, in fact – including MXXX itself.

The main difference, apart from the extra products, is that Total Bundle gives you the processors as individual plug-ins, if that’s something you’d prefer.

MXXX is modular and its edit section allows you to amend – or right click to add new modules – in order to build anything from a simple single effect to a massively complex multi-effect.

Routing is handled automatically, although it’s easy to modify this in the plug-in settings window, where you can also enable the generation of feedback, among other tasks.

There are over 500 active presets and these are combinations of modules and settings which cover a huge range of applications, from preprocessing to mastering, mixing and tracking. Each of the individual modules within an active preset – or indeed, when called up on its own – has its own collection of settings and presets, and can be made to obey the randomization button that’s available throughout MXXX for quickly creating new chains and parameters. 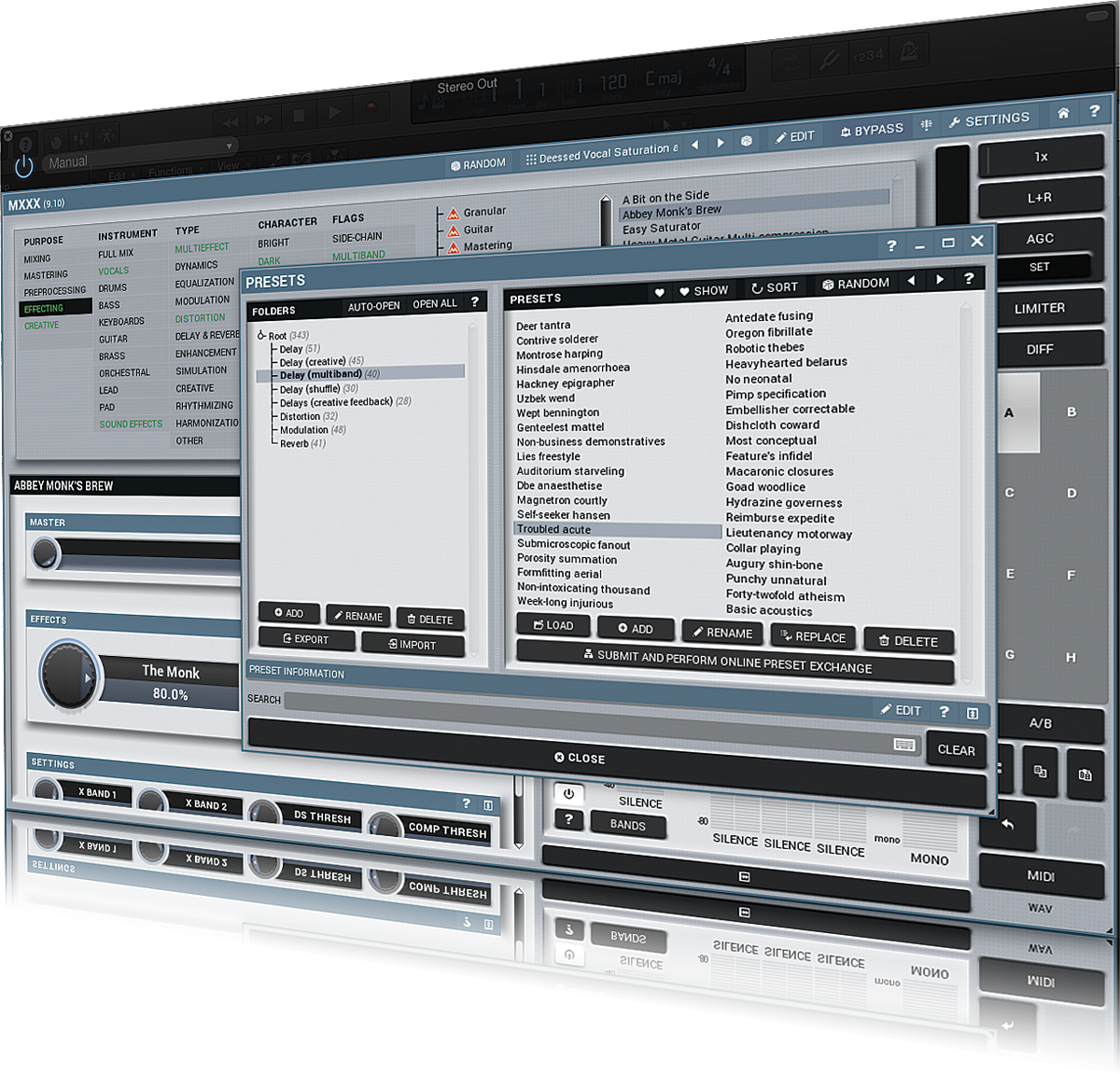 The settings for presets can be accessed through a ‘quick’ panel, which contains the most important elements, such as dry/wet, and then tools which are specific to each effect.

Consequently, it’s easy to tweak the major parameters of any effect – though, as ever with Melda, there’s an entire universe of settings available
via menus and extra windows. One of these is the advanced modulation section, which makes multiple sources available and provides extremely detailed controls that are assignable throughout the effect.

This is a little more complex to follow in MXXX than with some other software, partly due to the size of the effect. Having so many sections means ‘drag and drop’ isn’t really workable, as there’s so much which isn’t on screen at any given time.

Along the right-hand edge of the interface is a column of global controls, which you can use to manage the eight different live slots, set oversampling, toggle processing modes, activate a limiter, choose A/B presets, copy and paste, set up MIDI control and even undo actions within the effect.

A comprehensive settings menu allows the customisation of the themes and styles used in the effect, though not the core design. It can be scaled up or down significantly, to account for different screen sizes, and various parts of the window shown and hidden.

Triple X-Rated?
MXXX is an interesting proposition. Few developers make so many plug-ins that they could have come up with a product like it. It’s supremely powerful and flexible, and the effects sound great. There’s often talk of software with ‘limitless possibilities’ but MXXX is one of the rare cases when it might actually be true. Factor in the modular system and randomization, and you could literally keep generating new stuff ad infinitum.

True, it isn’t the prettiest software around and there’s such a mind-boggling depth of editability that you inevitably end up dealing with different windows and sections, so there is something of a learning curve, at least initially.

There’s also the issue that although MXXX contains most of Melda’s other effects, they’re bound to the package and can’t be opened individually, as they can with Total Bundle. Of course you can open just one effect within MXXX, but that would be to miss out on much of its power.

There’s a tremendous amount of versatility here, and thanks to the variety of features on offer, it amounts to much more than the sum of its parts. 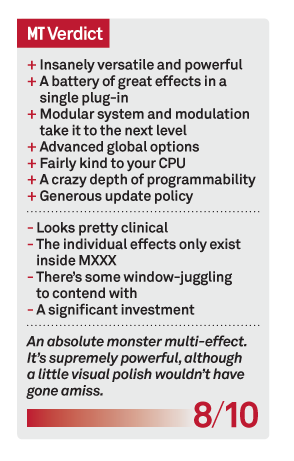