The MusicTech world exclusive Maschine Studio review. Liam O’ Mullane is the first person to get his hands on Native Instruments’ latest groove production studio and the new Maschine 2.0 software… 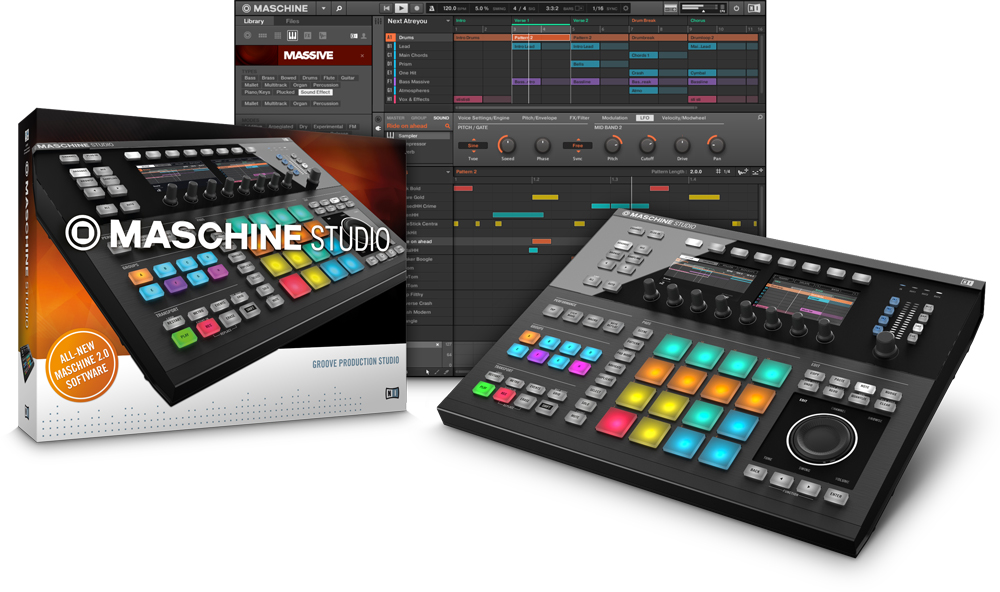 Although it was only back in 2009 that we reviewed the first Maschine release from Native Instruments, it certainly feels like the option of making music with Maschine has been around for a lot longer. There have been various hardware updates, and many significant software updates as well, but the core of Maschine’s purpose has remained the same: it’s a hardware and software based groove production system, most features can be controlled by the hardware, and of all things, simplicity is the main focus for the user’s experience. 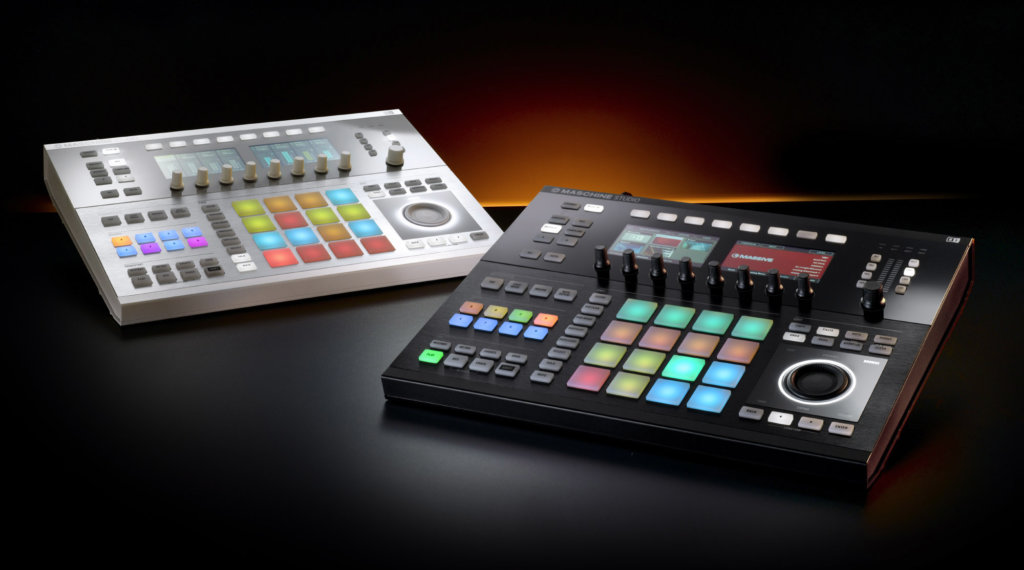 We reviewed the black unit but you can also choose white if you prefer. The pop-up stand built in underneath is very handy and easily pops away to keep everything compact.

Though the system is made with hardware in mind, you can use the Maschine software on its own without the controller, which is handy when travelling around with just a laptop. It’s also worth noting that the addition of iMaschine for iOS has been integrated into the Maschine family as well, meaning you can sketch out ideas on a handheld device, then import them into Maschine on your computer for further development. As well as having various hardware options to choose from in the Maschine range, until the latest 2.0 software release that we’re looking at here, upgrades have always been free to users with hardware from any generation.

Although the recent upgrade does come at a cost, most of the 1.x updates have received significant changes with each new release. If you look at what other major music making software packages offer, it’s easy to see that NI possibly give the best user loyalty we’ve seen. We also imagine we’ll see the same free updates for 2.0 in the future as well. Although we’ll discuss what’s new for all users of version 2.0, our main focus is on the latest Maschine Studio hardware and its potential to do away with your computer display altogether.

The lack of audio interface on a product at this cost will annoy some people, but it does at least offer much more MIDI connectivity than your current interface most likely will.

In the STUDIO
Before Maschine Studio, you’ve had a choice of either the regular sized Maschine or the smaller Maschine Mikro. Both have been quite easy to slip into a bag for portability. From the moment you get Maschine Studio out of the box, you can certainly tell this is the big daddy of them all. Taking up the desk space of a more classic, fully hardware based groove production system, the unit definitely requires a bigger bag. The two glorious TFT screens are a big change from the usual monochromatic screens of the other models, but with this feature comes the responsibility to take good care of them. We imagine that just sliding this unit into any old bag could potentially cause a lot of surface scratches, so we’d advise investing in a suitable padded bag, or case if you plan to travel with it.

A level meter with dedicated buttons sits on the top right of the unit and the dedicated button aspect is something that sets Maschine Studio above other models. The 16 drum pads are the same as those on other Maschine MK2 models, but there’s a noticeable lack of writing in between them. This is because Studio has most multi-function options covered elsewhere on a dedicated button rather than relying on giving the drum pads many other functions – another aspect that helps to improve your workflow.

When we first saw a pre-production unit a few months back, after being amazed by the screen displays, our next area of attraction was the jog dial. This is surrounded by relevent function keys and is a control that oozes with the feeling of a classic sampler. It is the only click based encoder on the unit, making it useful for any grid based movements as well as general finer adjustments where each click gives a sense of physical data feedback. We must also mention the bright white circle around the dial as it’s striking in both dark and light conditions, and can only be described as ‘Tron’ like. 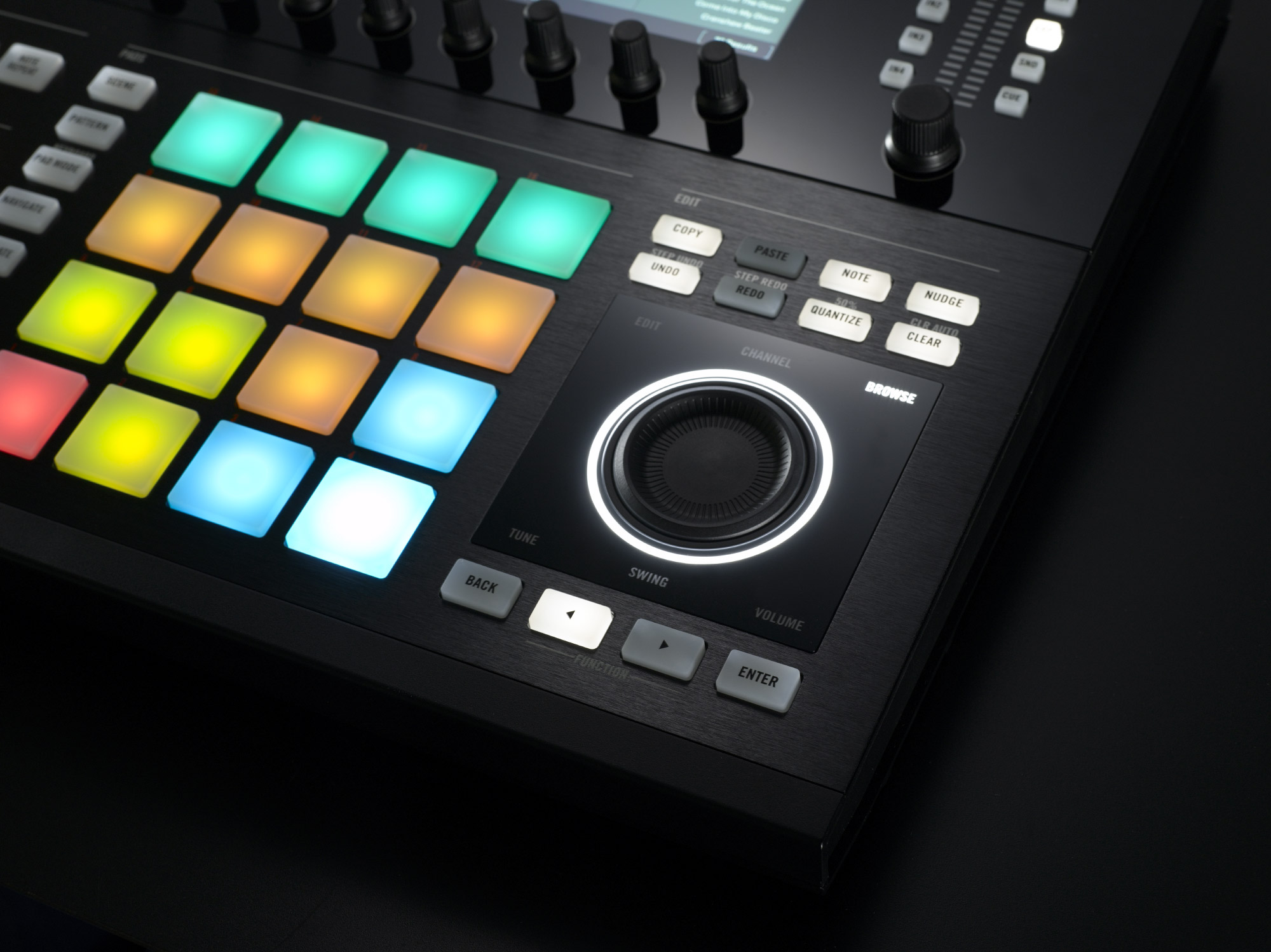 The multi-coloured drum pads are the same as the Maschine Mk 2 features. These have a great feel to them and are incredibly sensitive for dynamic control.

New for all
Before going through our experiences of making a track with Studio let’s look at what’s new in the 2.0 software update. NI have built this new software release from the ground up to remove certain restrictions that the previous architecture imposed. Most notably, the audio engine is now more efficient and it now has multi-core CPU support to make the most of your computer’s resources. The software comes with a healthy library which has grown in size by 2GB since version one. Many different styles of music are covered and quite a few of the included plug-ins like a good chunk of computational power, so better efficiency is important here. We experienced very low latency performance on our bottom of the range MacBook Pro, without needing to alter our settings until we were well into the song writing process.

But it’s not just computational improvements we have to talk about. The biggest update in terms of bundled features is the arrival of the new Maschine Drum Synth modules. Based between both acoustic modelling and drum synthesis, these are a real boon to an already extensive drum library. Each drum type has a few starting characteristics to choose from. For instance, kicks have names like Bold which deliver various varieties of forward sounding tones; Maple gives a lot of choice on modelling a live drum kit like kick tone along with room parameters; and Sub is great for 808-esc floor rumblers and so on. The sound quality of these is excellent and, more importantly, they have consistent quality as you travel through parameter changes. 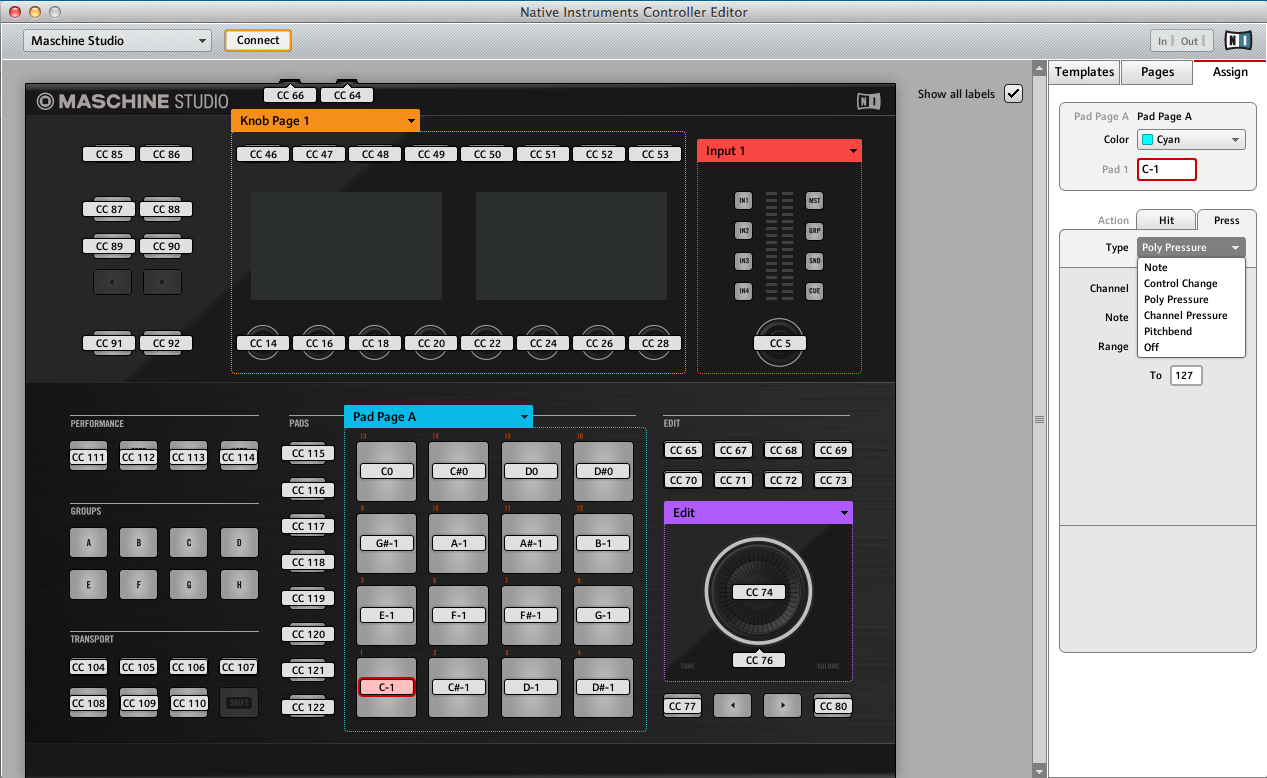 This is something NI are keen to highlight. We tested this and can confirm that there are no dead spots as you explore parameters. This makes it very easy to create drum variation by automating these controls over time without any worries of losing presence or power. Snares, claps, toms, shakers and other percussion are all available here and the sheer tonal range of the controls is vast. We spent a lot of time playing with these and we’re sure you will lose yourself in them too.

Although we’re focussing on the combination of the new Maschine 2.0 software alongside Maschine Studio, it’s important to note that the software’s functionality does not differ in the slightest for other Maschine hardware users. So we decided to put the Maschine Studio’s screen led control to the test and worked purely in standalone mode. This also involved a hardened rule to never use the computer screen through the process of creating a song – we worked purely from the hardware’s feedback capabilities.

Laying down a Groove
As well as working without the computer screen we also decided to proceed without consulting the manual. As a sign of NI’s claims of simplicity, it really is easy to grasp how everything works. Sounds can now be stored across an infinite number of groups which hold up to 16 sounds each. The new side-chaining function is very simple to understand. Setting it up is simply a matter of selecting a sound or group to be used as the external key-input from the plug-in to be triggered. The number of insert plug-ins per sound and group is now only limited by your computing power and this applies to auxiliary tracks as well. The small graphical images that represent your effects and instruments are very useful to help understand what’s going on as you add, bypass, move and generally explore sonic possibilities with plug-ins. This also works in tandem with the new mixer view which, as you’d expect, makes it easier to navigate as you mix and balance your work.

Programming patterns from a sound per pad, playing sounds like a keyboard across all pads and step sequencing are all very easy to figure out, perform and then edit to perfection. The sequencing and arrangement aspect is vastly different in Studio’s case as you would previously have to look at the computer screen to understand what’s going on. Sample editing also benefits from the high-end displays and you can zoom into the smallest detail to carefully edit a sample or loop slice.

Not everything is quite as fluid as the majority of features though. For instance, external VSTs not made by NI cannot be currently loaded from the hardware. Also, pressure sensitivity (after touch) can only be used for note repeat velocity control. It’s a feature that’s otherwise not on offer for any other integral element of the Maschine library. We discussed this with NI and they do have thoughts on how they can resolve the VST issue in a way that will seamlessly integrate them into the Maschine Studio experience, but there’s no official word on this yet. If you switch Maschine Studio into its MIDI mode you can output aftertouch CC data per pad, but this is a user definable area of using the hardware. On one hand this offers a lot of potential power, but at the same time cannot be classed as part of the otherwise fluid Studio experience. 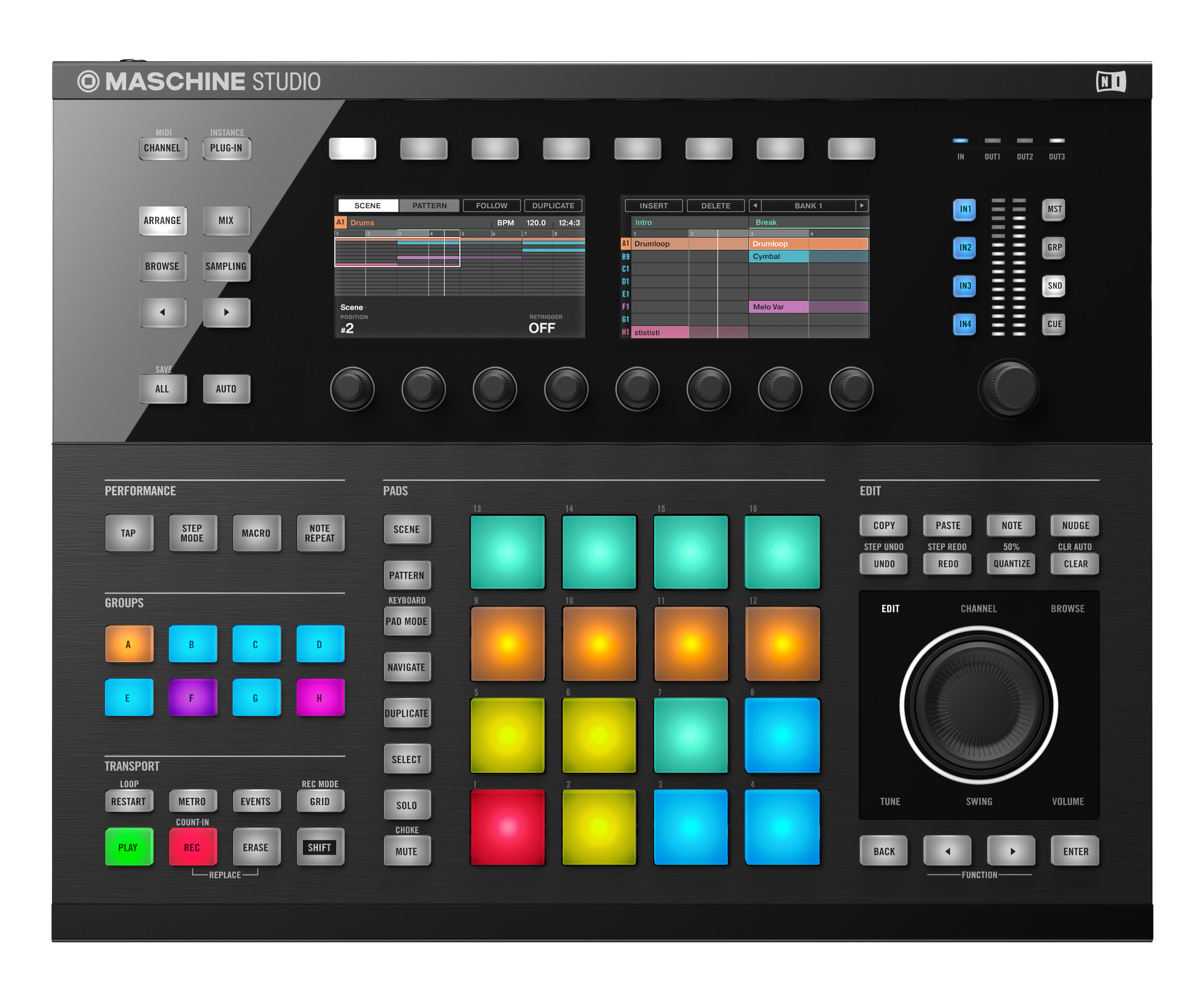 By the end of our time with Maschine Studio we can say that we had a mostly positive experience and that we managed to work completely without the computer screen from start to finish, at least when using the integrated library content. This makes this quite big financial investment attractive to those who are sick of looking at computer screens every time they make music. It will also mean that live performances can do away with having a laptop glowing in sight somewhere on stage. As a performer you can instead just concentrate on the essential visual elements in front of you and of course, the crowd you’re entertaining.

So whether you are performing on stage or composing elsewhere, Maschine Studio offers a true ‘hardware experience’ with all of the advantages that software brings. As Native Instruments previously challenged our perceptions of software, so they have now well and truly ushered in a new era of hardware control and composition.

A hardware and software combination that feels like hardware. The screens and larger range of dedicated operation buttons seriously improve workflow and the new features of Maschine 2.0 make this a promising new era for the Maschine family.