With a resurgence in hardware and the popularity of solo singer-songwriters, sometimes musicians just want to plug some stuff in, mix and play. Mackie has just updated the oldest of solutions for just such a scenario. Andy Jones plugs in and tests the company’s mixers for everyone… Details Price Mix5: £59 Mix12 FX: £129 Contact […] 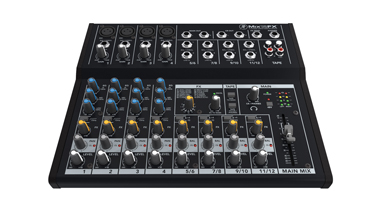 With a resurgence in hardware and the popularity of solo singer-songwriters, sometimes musicians just want to plug some stuff in, mix and play. Mackie has just updated the oldest of solutions for just such a scenario. Andy Jones plugs in and tests the company’s mixers for everyone… 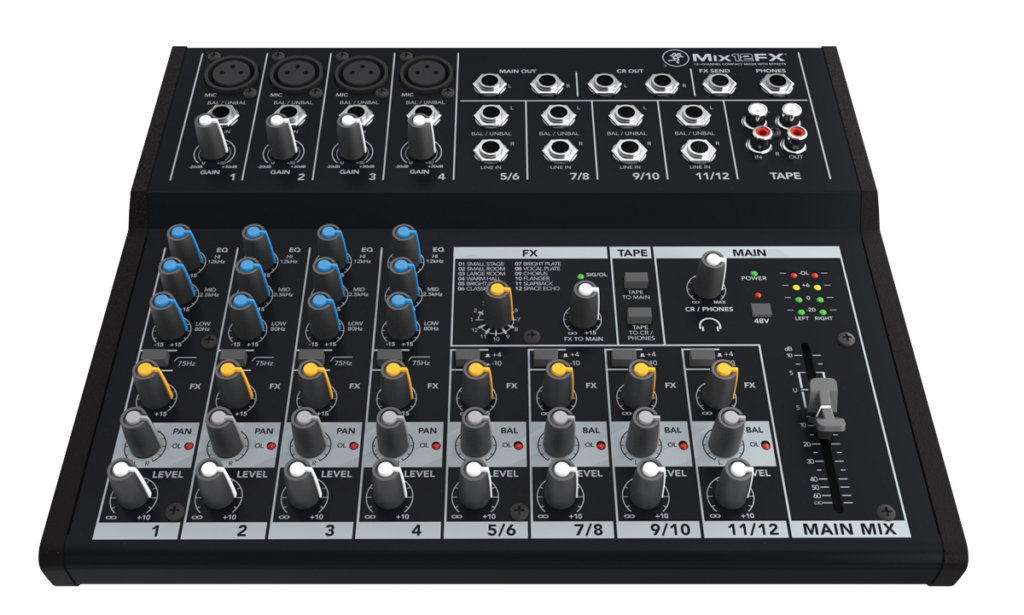 Sometimes, simplicity is obviously best. Sometimes we get just a little bit carried away with having ‘USB-this’ and ‘FireWire that’, when actually all we need are the basics. As the commentator says on the accompanying video to Mackie’s new Mix series of compact mixers: “Let’s face it. Not all audio jobs are complex.”

So what we have here is a range of compact mixers that do just that: mix a variety of audio channels within compact (very compact!) and rugged boxes. No computer interfacing, just mixing. Just like it’s the 80s again. But why? It’s a very good question…

As I discussed here, we’re seeing a grand resurgence of hardware in our project and pro studios, with people branching out from the all-in-the-box approach to recording, so interfaces with multiple i/o have become super popular. 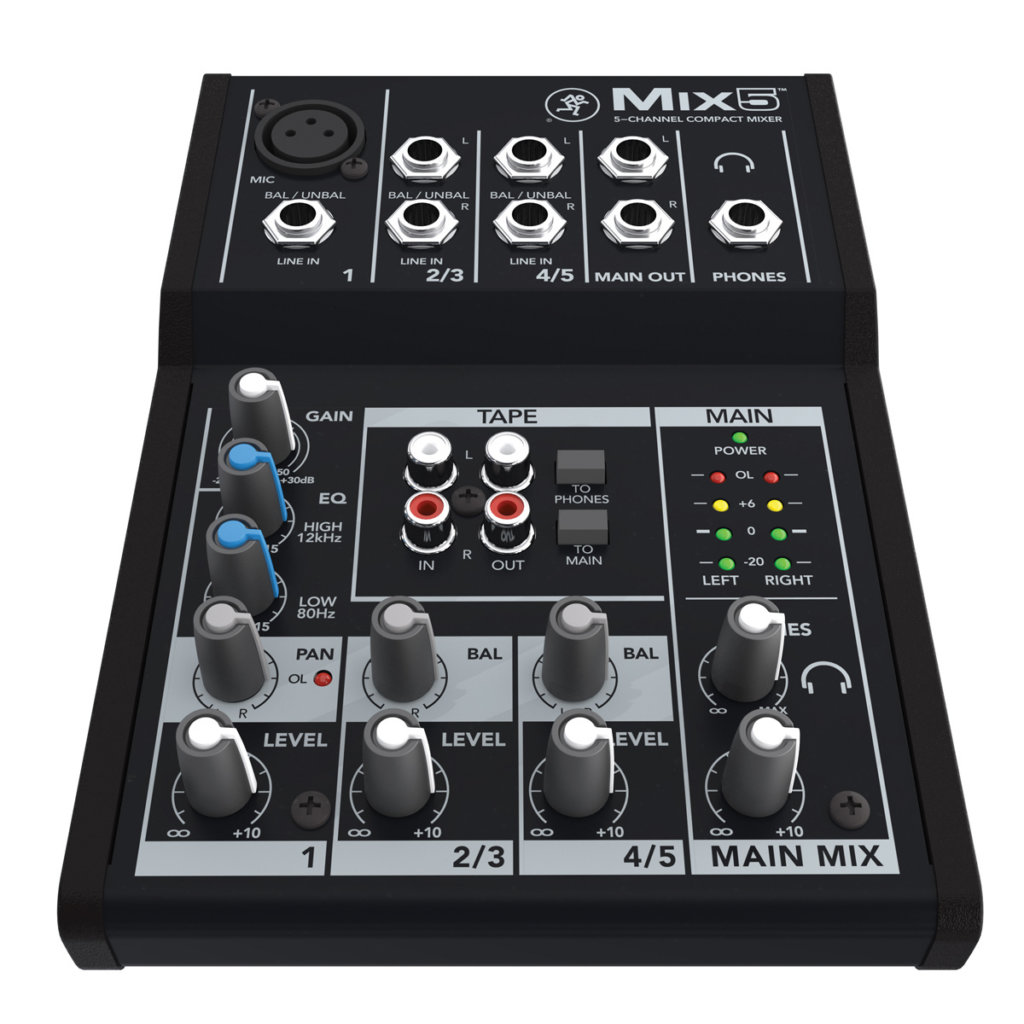 But the return to analogue for many people – and the popularity of the guitar-based singer-songwriter – means that some musicians just want to mix some stuff together quickly for a jam or a writing session where they might not be in desperate need for a computer. Or other musicians might want to just plug in and play – open mic nights are hugely popular again – so the compact mixer of yesterday is making a comeback, even though it never really went away… But today not being the 80s we expect, and get, a bit more for our mixing buck. The Mix range from Mackie, then, covers all basic bases and at a very basic cost.

Updated Mixing
There are three mixers in the range of which we have the smallest 5-channel and biggest 12FX on test. (The other is an 8-channel model which, for ease, we can just consider as the 5-channel version with three added extras.)

The most compact is the 5-channel version – not the most obvious number of inputs you might say. It’s compact to an almost ridiculous degree – you can easily hold it within the palm of one hand. There’s one mono input (by way of 1/4in jack or balanced XLR (female) input), two RCA ins and two pairs of stereo 1/4in inputs. There’s one mic pre and EQ on channel 1, pan/balance and level controls for all three inputs. Outputs are just as simple: Tape (it’s nice to see the word ‘Tape’), plus headphones and main outs plus level controls for the latter two. And that’s it!

This is a mixer for your most basic setup: maybe you’re a solo artist who wants to do a bit of recording or even a duo playing the odd gig. It is also, as Mackie promises, low in noise and rugged, although we’re not quite sure it will take the beating the guitarist serves out to various mixers in the video. It’s solid metal construction does lend itself to life on the road, though.

FX to the Dozen
At the top of the range everything gets bigger – although not that much bigger – as the spec increases. With the Mix12FX you get four mono inputs, each with EQ, and four sets of stereo ins. Outputs are also increased with a Control Room option, but it is the effects that are arguably the biggest addition (hence the ‘FX’ in the name.

It’s quite a simple but (ahem) effective section – one dial to select, and one to adjust the level – with delays and reverbs plus some choruses to fatten your sound up. Reverbs are not overpowering and the delays also very usable. Another addition includes an extra band for the four channels that feature EQ.

I’d say that all the extras combine to make the 12FX the better buy out of the two, especially given that it is only £70 more. For a mixer which is still compact it just has enough extras to do a good job in lots of situations.

But both mixers have a surprisingly punchy EQ with the bass in particular offering more bang than you might expect for the outlay, And while we’re on the subject of the sound the noise is low, although you will notice it at high input gain scenarios – of course you will – but it’s not as pronounced as some mixers in this price band. And at normal levels you will not notice any at all.

Simple and Cheap
The Mix range does exactly as it should do across three low price points. The mixers we tried are both rugged, low in noise and compact enough for a variety of small venue live situations and studio recording scenarios. We’d have liked an interfacing option but that’s because we’re a studio-based magazine and the computer is our friend.

However you can opt for the Mackie Pro FX series which offers USB interfacing at only a small skip and a jump price wise (another £110 for the 12-channel option, for example).

As a simple set of mixers the Mix series is very solid: an elegant solution to many small studio and live situations, and great value. 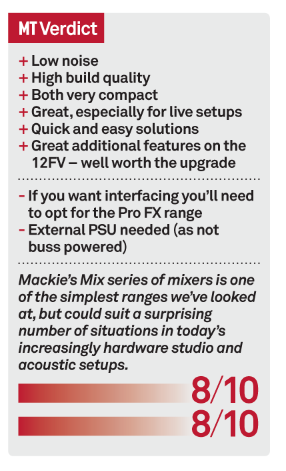