If you want to break free from the FOH desk and happen to own an iPad, Mackie has a solution for you. Hollin Jones tries it out. 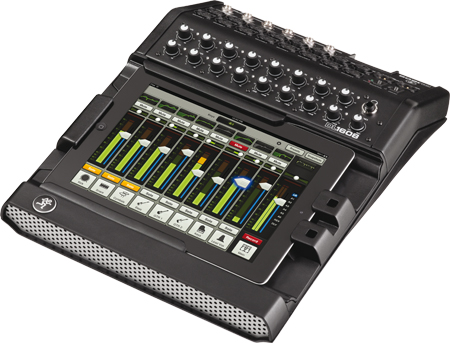 The line between mobile technology and professional music equipment continues to blur, as iOS devices become increasingly used not just as sketchpads, but serious professional tools. Granted, in this context they are most often used as controllers rather than production environments, but nonetheless, the pace of change in the mobile arena is nothing short of staggering.

Mackie is a big-hitter in the live sound world so it’s perhaps not surprising that it is among the first to take this fusion of technologies to the next level with the DL1608, an iPad-controlled digital mixer. And when the company says iPad controlled, it means it: there are no physical faders. So it’s a bold step forward, but how does it perform?

First: a look at the idea behind the DL1608. Live sound engineers do spend a lot of time running back and forth from the desk, changing levels and checking settings. This mixer aims to free the engineer from standing behind the desk – at least for some of the time. It does this by placing pretty much all the controls inside an iPad app (free to download) and enabling this to work either when docked with the mixer or wirelessly. It’s an intriguing concept, and many touring engineers do have iPads for those long plane journeys and hours spent on tour buses.

The hardware itself is relatively minimal, though very sturdy and nicely put together. Around the back you get 16 inputs powered by Onyx mic preamps and with high-end Cirrus Logic converters. These are 12 regular XLR plus four combo inputs and there are, of course, stereo XLR master outs, six aux send jack outputs and a headphone out with its own gain control. Sixteen physical knobs are provided for manual level control, though presumably these are mainly as fallback on occasions when there’s an issue with the wireless or the iPad.

An Ethernet port is provided which must be used to connect the mixer to a wireless router if you intend to use the iPad as a wireless as well as a docked controller. Setup is really very easy and begins with downloading the Mackie Master Fader app from the App Store (any iPad model) and connecting the mixer to the router. You then dock the iPad with the mixer and it may perform a firmware update; it did this automatically on our model and the update was seamlessly performed in-app. The iPad also charges while docked. Once that’s completed and the iPad and desk are connected we had full control of the mixer. The desk can be secured with a Kensington lock and the iPad can be secured in the desk if you choose, both of which are good for busy gig environments.

The app itself is well-designed and uncluttered and the faders responded very accurately and smoothly on our second-generation iPad. Metering is fast and there’s mute and solo on each channel as well as a master fader that can be flipped to control the six aux outs as well as the reverb/delay channels. The app works wirelessly as well as when connected and there’s a brief sync of data that occurs when you disconnect the iPad from the desk. Overall, though, the transition is seamless.

App, App And Away

The app can store presets and there are some supplied that can be loaded into any channel; you can also store your own. Channels can be named and have an image associated with them – this extends to taking pictures with the iPad camera. That might sound gimmicky but it could be incredibly useful. Imagine being able to snap a picture of each band member and then place that picture on their mixer channel. It would make quick reference much easier, especially during a show. You can also take mixer snapshots and there’s a Recall Safe feature that will exempt specific channels from having settings overwritten. Presets can be named, so you can flip between snapshots easily, which is handy for recalling setups for different bands or songs.

Tap on a channel’s EQ window and you open the EQ section. Each channel has its own four-band EQ with draggable points and bell or shelf types, plus adjustable Q values. You also get a high-pass filter and a phase-invert switch, and scrolling down from the EQ window reveals further effects on each channel. There’s a gate – again with draggable points and sliders for easy setup – and a compressor with soft or hard knee plus all the controls you’d expect. These are simple to use and since all processing is carried out using the mixer’s internal DSP, they place no strain on your iPad.

Scroll down further again and you will find reverb and delay, assignable on a per-channel basis. The reverb section has multiple types as well as Predelay, Damping, Decay and Rolloff controls along with a master level fader. The delay has multiple types including ping-pong and tape echo, and left/right buttons for manually setting the repeat rate. There are also Feedback and Damping controls. Again, these effects are processed in the mixer itself and the iPad acts as a control surface, so no processing is done on the portable device. The master fader also features a 31-band graphic EQ with a Draw function, enabling you to enter smooth EQ curves by hand.

Last But Not Least

Other clever features in the app that are worthy of mention include a dedicated iPad channel through which audio can be streamed from any other app that supports background audio, so you could use the iPad as a jukebox. It’s also possible to record a stereo WAV file of everything running through the desk, which is a nice touch as it makes recording a show easy. Both of these features work only when the iPad is docked and not when it’s in wireless mode. It’s also possible to use up to ten iPads with a single system so that more than one engineer can work on the system remotely, or musicians can set up their own monitor mixes from the stage. This last concept is a great one – providing that the engineer trusts the band member with remote access to the desk. Getting monitor mixes right by continually shouting to the engineer is tiresome and this could be an interesting solution.

In practical terms, the DL1608 is surprisingly easy to set up and use, and won’t prove daunting even to beginners. The app is logically laid-out and provides almost all the tools you might need, though we’d like to see a way to link faders. At present it’s possible to move multiple faders with several fingers, but not link them so that one will move the others by the same amount, which is useful for grouped sources such as drum kits. Since the app can be easily updated by Mackie, it seems likely that something like this could be added in the future.

By leveraging the best aspects of the iPad – touchscreen, menus and wireless – the system simplifies the process of live sound mixing and setup to the point that it’s easier to understand than when looking at a load of physical controls. This applies equally when using the iPad docked (which means the whole unit has a smaller footprint) and when using it wirelessly. Wandering about turning channels up and down, altering EQ and reverb could be hugely liberating, enabling engineers to account for the idiosyncrasies of specific rooms and meaning that they won’t have to keep running back and forth between stage and desk.

Snapshots, camera integration and audio recording are great features that will be genuinely useful, and overall the package feels like a real step forward in the live sound world. If you didn’t use the iPad wirelessly the case would be harder to make for this versus a standard mixer, though the sound quality is excellent. We’re willing to bet, though, that once people get a taste of it, they won’t want to go back.

– Not possible to link faders

A well-designed and beautifully implemented solution for controlling a live setup remotely.