Responding to the demand for multimedia computer speakers, Mackie has introduced the Creative Reference Multimedia Monitor Series. Huw Price tests the CR3 and CR4… Details Price CR3 £100; CR4 £119 Contact Polar Audio 01444 258 258 Web www.mackie.com There has been a noticeable trend towards active speakers that fall halfway between old-style computer speakers and […] 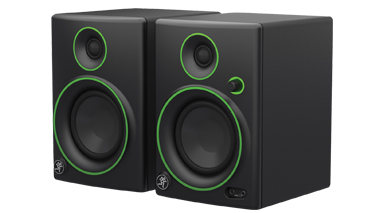 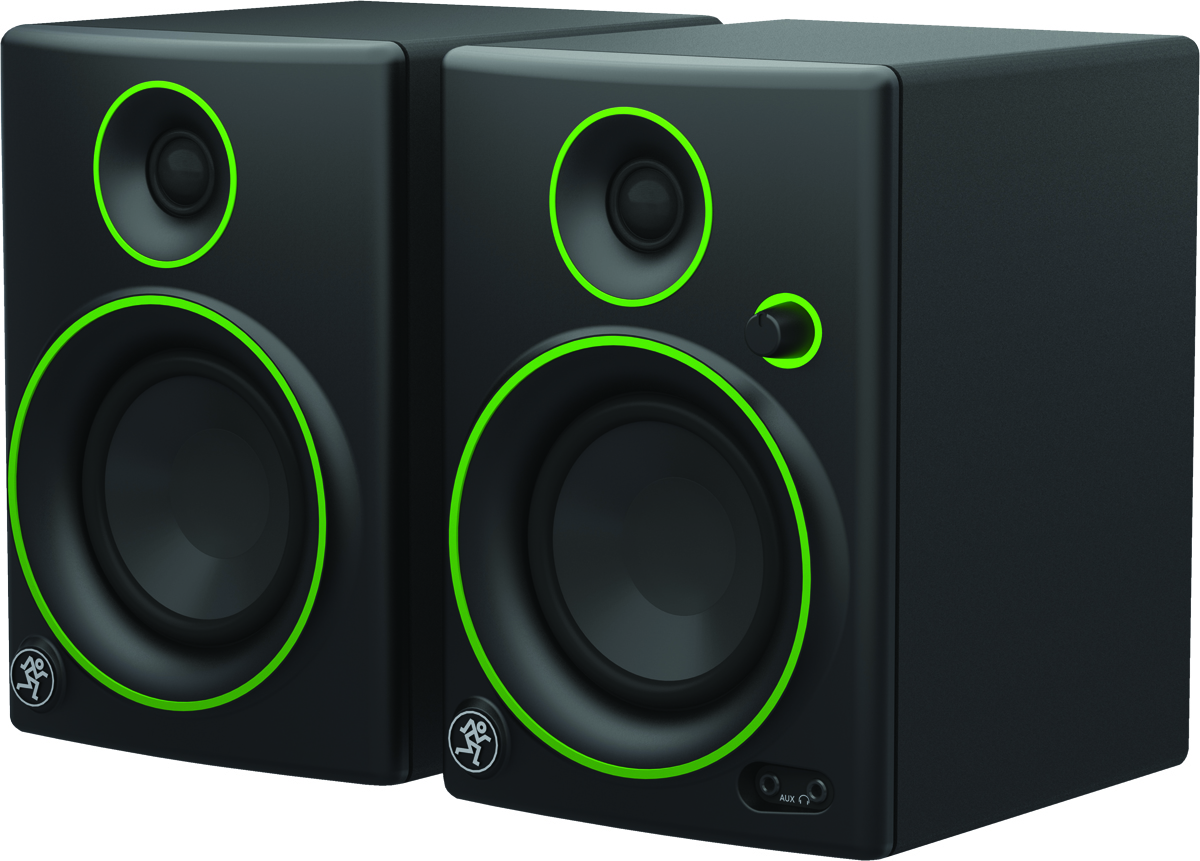 There has been a noticeable trend towards active speakers that fall halfway between old-style computer speakers and budget nearfield studio monitors. Considering the bewildering range of activities we conduct on our computers these days it’s hardly surprising. Sometimes a full-blown monitor system is overkill when you just want to plug in and play.

It’s probably fair to say that the Creative Reference series is not designed for critical listening applications in commercial studios.

The CR3 and CR4 are really intended as desktop speakers for bloggers, podcasters, YouTube uploaders and video editors – not necessarily serious music makers. But that said, there’s no reason they can’t function as basic monitors or for those who are just starting out in home recording. 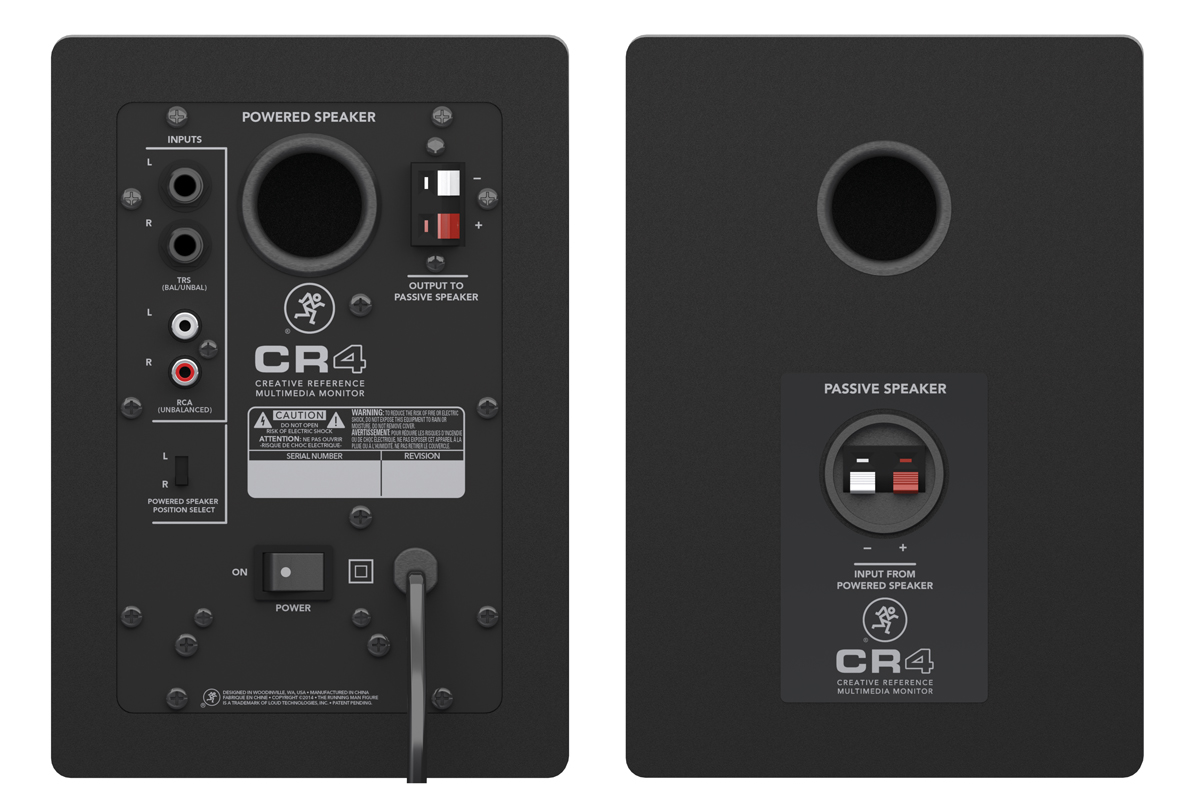 Creative Impulse
Although similar in many respects to conventional active nearfields, the design criteria for these Creative Reference speakers are somewhat different. There are no frequency shaping or equalisation switches and only one speaker from each pair is active. The not inconsiderable trade off is ease of use and a wider than usual set of connection options.

The bundled accessories include acoustic isolation pads to minimise boomy bass and provide an up or down tilt for focused listening, a 1/8in to stereo RCA cable to connect computer output to speakers, as well as a 1/8in to 1/8in cable for smart phone or media
player connection.

The CR3 and CR4 also come with a generous length of speaker cable. The active enclosure contains the amplifiers for both the left and right sides and there’s a volume control on the speaker baffle. Users can decide if they want the ‘master’ speaker to be placed on the left or right and there’s a Position Select switch so the speaker knows where it is.

Fronting Up
The volume control doubles up as an on/off switch, and sockets for headphones and Aux input are also located on the front panel. This makes it about as simple as it gets to hook up a smart phone to the speakers. Other options include balanced TRS jack and unbalanced RCA sockets labelled for left and right. 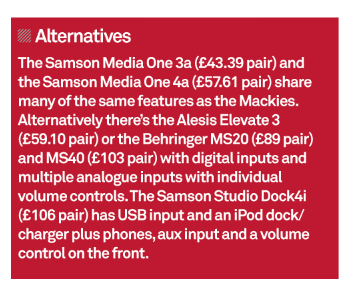 The CR3 3 has 50 watts of power to drive a 3-in polypropylene coated woofer and a 3/4in ferrofluid cooled silk-dome tweeter, and the frequency range is given as 80Hz–20kHz. In contrast the CR4 has a 4in woofer and a slightly larger enclosure that lowers the bass to 70Hz. In all other respects these models are identical.

Since MusicTech’s primary focus is recording equipment, we lined up the CR3 with a similarly sized active studio monitor for a comparison test. To be honest, we weren’t expecting the CR3 to compete as such, but it was felt that this would reveal what compromises, if any, were involved.

Testing Times
The CR3 acquitted itself very well. The overall sound was open and transparent with a nicely airy treble. The high bass roll off point was apparent because kick drums do lack chesty thump, but the response was fast enough to convey bass lines with the notes and timing of grooves fully intact.

Imaging was also noticeable for its crisp focus and solidity as well as an impressively deep sound stage. However the CR3’s limitations become apparent when they’re pushed hard because material with prominent and deep bass parts induces audible turbulence around the port openings.

The CR4 also suffers from port chuffing but the extra 10Hz in the low frequency range is clearly audible and makes this a slightly better balanced speaker. They’re not miles apart, but we felt that the CR4 was that bit smoother and more refined. The midrange was also a little fuller and more natural.

Even so, both these Mackie monitors were very pleasing to listen to and offer sensible features for a range of uses. If space is at a premium the CR3s will do a very decent job, but we think the CR4 is well worth the extra £20. 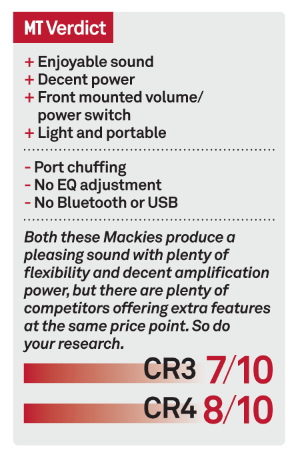