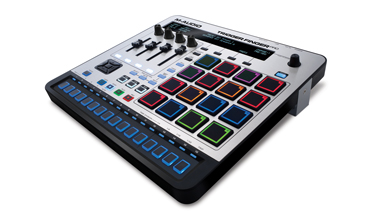 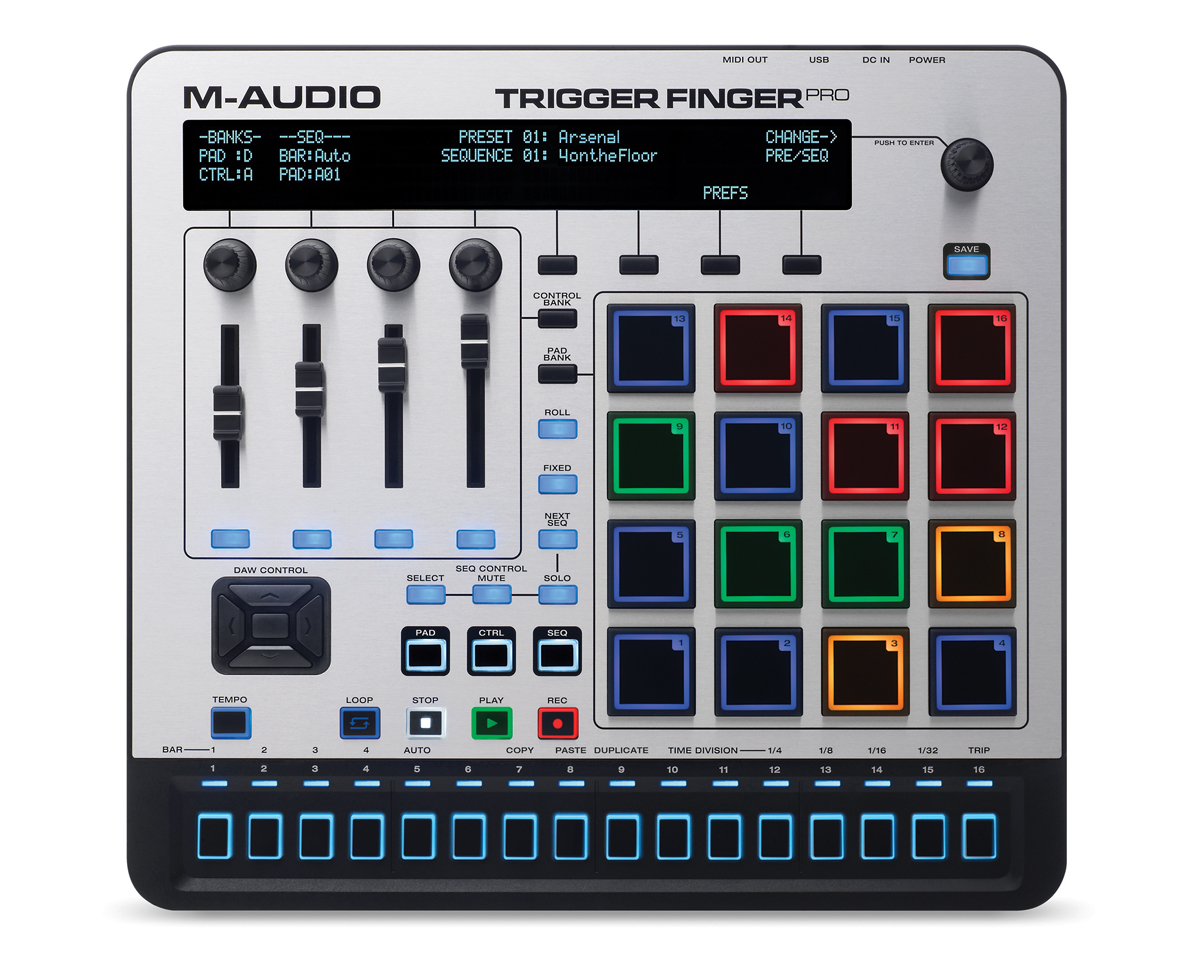 M-Audio’s original Trigger Finger was a popular MIDI pad and controller device that helped to kickstart the whole ‘hands-on’ performance phenomenon, as more and more people started to play live with laptops. Technology doesn’t stand still for long, though, and now the company has released the Trigger Finger Pro, a much-expanded and upgraded device that’s a bit of a quantum leap forward from its predecessor.

Designed to be used both in the studio and on stage, or even without a computer for some tasks, it has quite a few potential users in its sights. 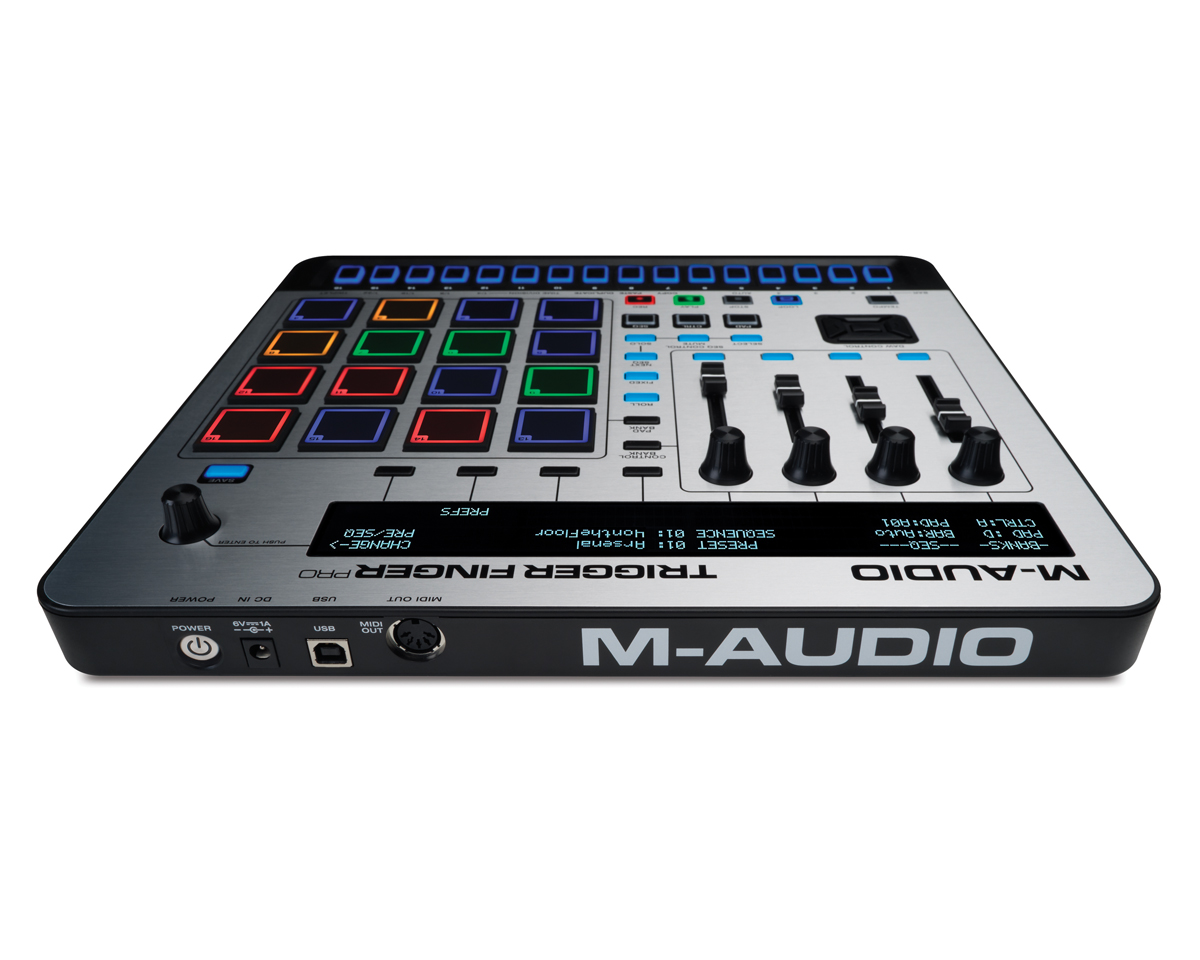 Getting Started
The device is class compliant but you will need to download the Arsenal software and other content to get the most out of it, which means creating an account online and downloading around 3GB of files (though the actual hub software only accounts for about 400MB of this and can be downloaded separately). The hardware unit itself is solid but lightweight and would slip easily enough into a backpack, and has an adjustable metal stand for positioning as you want.

It powers over USB or via an optional power supply unit, and there’s also a conventional MIDI port. It’s this, combined with the onboard sequencer, that enables the device to act without the need for a computer if set up that way.

The front panel is where most of the action takes place and there are 16 touch-sensitive pads and four pad banks for a total of 64 pads. These are backlit and feel responsive and fun to play, especially for beats, and to help you achieve creative performances there are specialised controls, such as Roll. To the left are four knobs and faders that have four control banks for a total of 16 possible parameters.

Under this is a DAW control joypad and elsewhere is a range of contextual controls for navigating the device and interacting with the large backlit LCD screen, which has various modes for working with your software. Along the base of the hardware is a colour-coded 64-step sequencer that’s assignable to any MIDI-triggered instrument.

Fire Up The Big Guns
M-Audio’s secret weapon in all this is Arsenal, a software application that runs on your Mac or PC and acts as a hub for loading plug-in instruments and managing MIDI mapping. It can run either in standalone mode, in which case it is ideal for performing live without needing to have a DAW running, or it can run as a plug-in inside your existing DAW.

M-Audio provides templates for controlling a range of popular VST instruments (including all of Native Instruments’) plus a good selection of others. You can set the Trigger Finger Pro to control your DAW as well by following the usual control surface setup procedure for your sequencer, and then putting the box into the relevant mode. 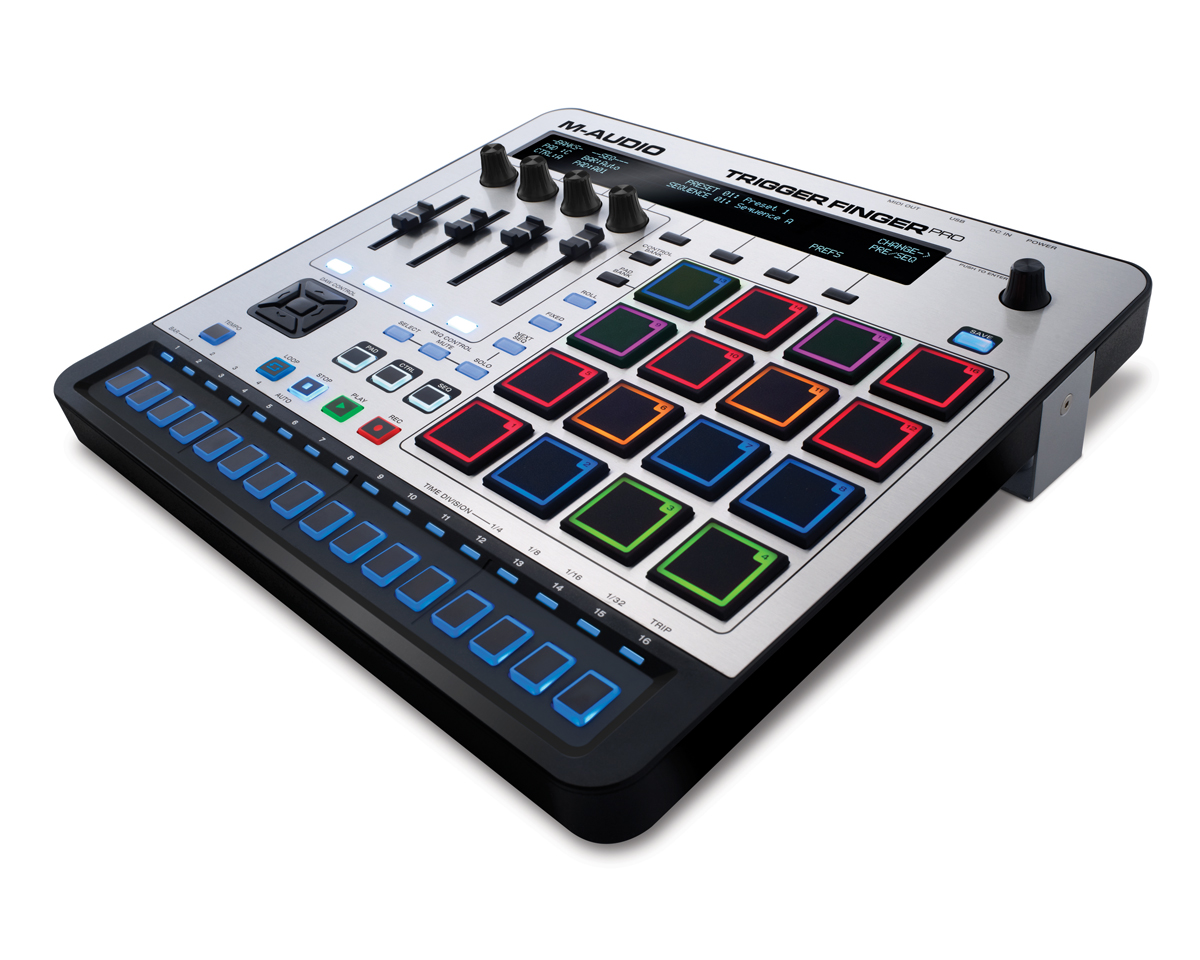 Arsenal enables you to navigate and search all your plug-ins easily and also features tagging support so you can quickly zap straight to the presets you want. You can save setlists of patches for live performances and also, of course, view and edit plug-in interfaces and settings through the app. You can also load, save and edit plug-in maps as well and there’s MIDI Learn for customising setups.

In addition your purchase gives you 8GB of production software and samples that can be triggered by the device. AIR Drums by AIR Music Tech is a virtual drum module and the same company also supplies Hybrid 3, a multi-talented synth that covers sounds from analogue through to futuristic. You also get 2.5GB of instrumental loops, drum kits and one-shot sounds, and finally there’s a 5GB drum and percussion library by Prime Loops comprising over 2000 sounds. 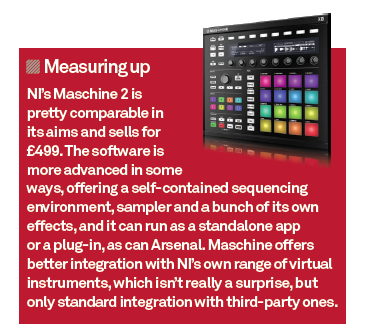 The whole setup took a little while to iron out when getting up and running, and there was also some fiddling involved in getting the hardware to control Logic after setting it up using the Mackie control protocol, but it did eventually work. The Arsenal app crashed once or twice but this is likely due to outdated plug-ins on the system, which in truth can bring down almost any app. On the whole, the experience was good once it settled down and things locked together well.

You might think that what M-Audio is aiming at here is not dissimilar to what Native Instruments does with its Maschine 2 controller, and you may have a point. Where NI offers perhaps a smoother integration with its software, M-Audio provides a hardware step sequencer and some faders. Both can host plug-ins, and run as a plug-in themselves in standalone mode, though Arsenal’s probably better at actually navigating third-party plug-ins.

The M-Audio unit is also rather less expensive, which will be important for some people. Ultimately, this is a fun and flexible MIDI controller. 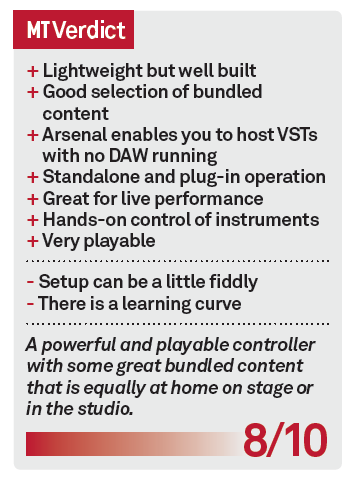