Have you ever wanted to alter the polar pattern of a microphone after you’ve finished recording? The Lewitt LCT 640 TS lets you do just that. Mike Hillier sets out on his polar expedition… Details Manufacturer Lewitt Price £879 Contact www.lewitt-audio.com Minimum System Requirements – PC AAX or VST host, Mac AU, AAX or VST host […] 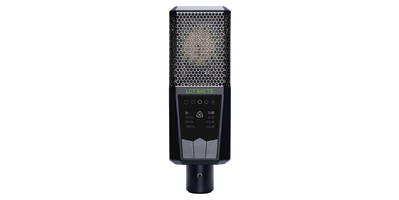 Have you ever wanted to alter the polar pattern of a microphone after you’ve finished recording? The Lewitt LCT 640 TS lets you do just that. Mike Hillier sets out on his polar expedition… 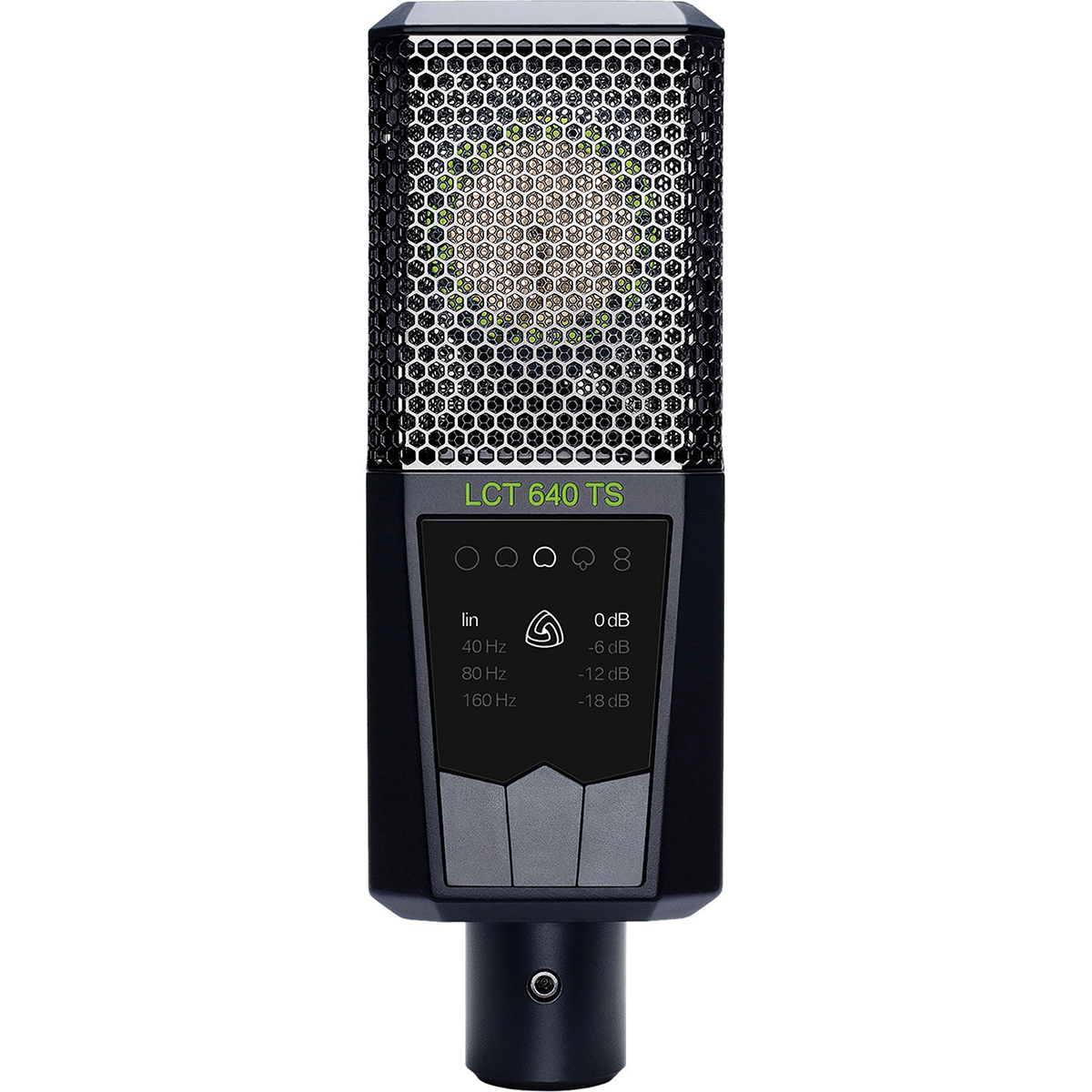 Finding the right polar pattern for any particular recording technique is an important part of the craft, and a good engineer will know the advantages and disadvantages of each. Whether it’s using the right pattern because the stereo technique demands it – such as using figure-of-eight and cardioid with mid/side techniques – or simply switching patterns to reduce bleed, the right choice can make or break a recording. So what if you could change your mind after the band has gone home? Or even in the mix? Lewitt’s new LCT 640 TS microphone features a unique Dual Output mode, which enables you to do exactly that.

Polar patterns on multi-pattern microphones are created by combining the output of two diaphragms: often either an omni-directional and a figure-of-eight, or two cardioid pickups.

The phase relationships between the two signals then produces the other patterns. The LCT 640 TS uses two cardioid diaphragms, creating an omni pattern by running both diaphragms at the same level, and figure-of-eight by flipping the polarity of the rear diaphragm.

This Way or That?

Most multi-pattern microphones enable you to switch the pattern either on the microphone itself, or on the power supply. This alters the balance between the two pickups internally, and produces a single signal on the XLR output.

In Multi-Pattern mode, the Lewitt LCT 640 TS also does exactly this, behaving like its sibling the LCT 640 would, enabling you to select from one of five polar patterns using switches on the body. However, in Dual-Output mode the microphone uses a second output on the side of the body to enable you to record the front and rear diaphragms to separate channels. 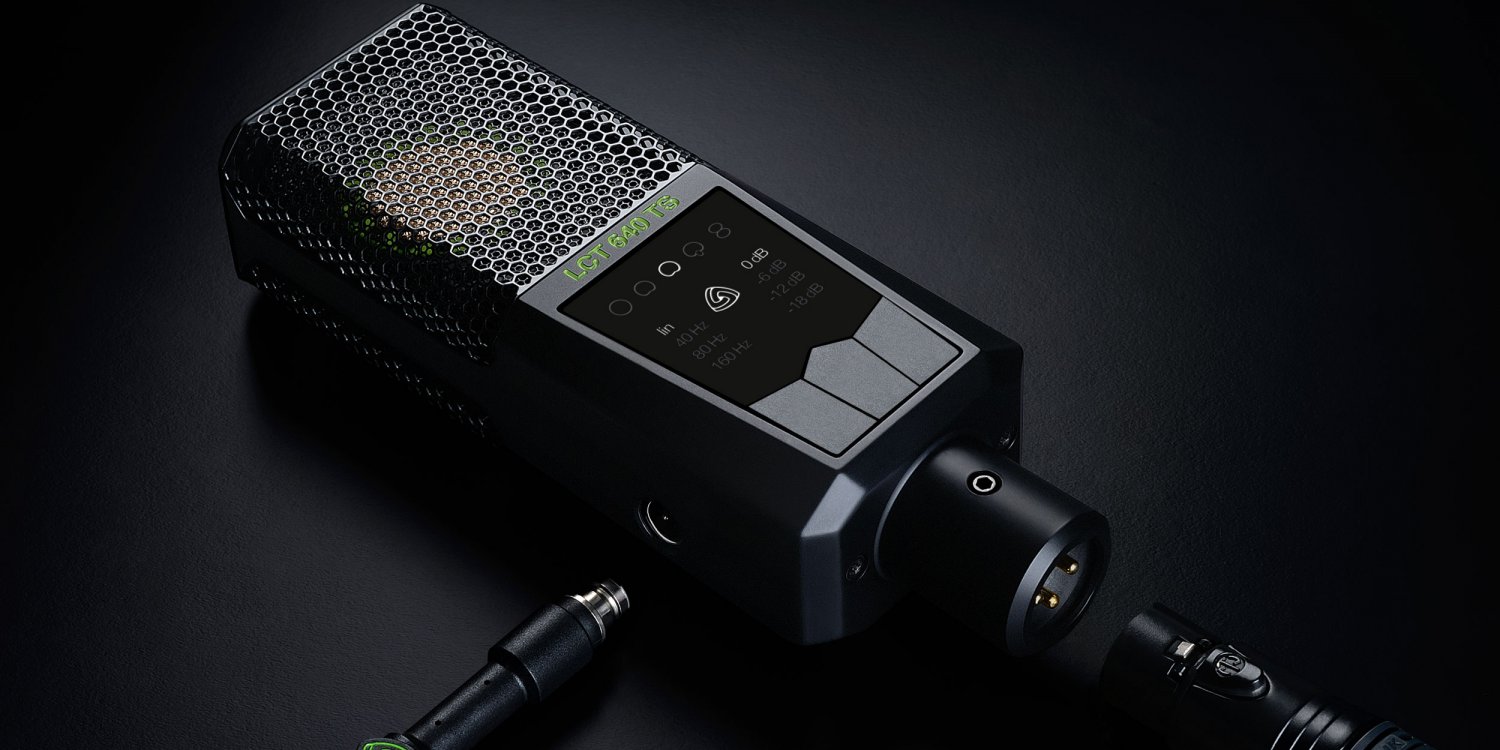 The second output is accessible via a small port on the side of the microphone body, covered when not in use by a small rubber patch, which ensures that it’s kept clean and safe when not in use. A one-foot adaptor cable is supplied, which enables use
of this port with standard XLR cables.

Also included with the LCT 640 TS are a custom shockmount, with an accompanying pop shield – which sits on the shockmount itself, held in place by weak magnets – a selection of spare rubber patches, a windshield, a leather pouch and a sturdy flight case to hold everything in.

We began testing the Lewitt LCT 640 TS using the standard Multi-Pattern mode. In this mode, the microphone behaves exactly as you’d expect a multi-pattern microphone to behave, with switches on the front to move between Omni, Broad Cardioid, Cardioid, Super Cardioid and Figure-8 patterns.

Additionally, you can engage a low-cut filter at 40, 80 or 160Hz and a pad at -6, -12, or -18dB. For our initial tests, we recorded a male vocal in our booth with the microphone in the Cardioid pattern, with both the pad and filter disengaged. The LCT 640 TS has a clear, uncoloured sound, with a slight lift into the upper frequency range, centred around 10kHz.

Comparing it with an AKG C414 XLS setup with similar settings, the LCT 640 TS has a more flattering quality to it. The lows are bigger, and the upper midrange smoother and more pleasant, with a touch more air around the vocal.

However, this seemed to be at the expense of a little midrange warmth, and the proximity effect made using the mic with the filter bypassed a little boomy. At 40 and 80Hz, the high-pass filter is 12dB/oct and, set to 80Hz, our bottom end started to take shape.

However, at 160Hz the filter switches to a lighter 6dB/oct, which means you should be losing just as much 40Hz as at the 80Hz setting, when set to 160Hz, but you’re also pushing out a little more above this.

For our vocalist, this setting pulled a little of the life out of the bottom end, but was much smoother at controlling the proximity effect, and was our final preference.

On acoustic guitar with the mic set to Figure-8, the LCT 640 TS sounded sweet and clear.

The strings rang cleanly and the figure-of-eight pattern blocked any breathing noise from the guitarist. For this performance, we used the filter set to 80Hz, which was perfectly suited to pulling out any rumble without any noticeable effect to the tonality of the guitar.

The only other microphone we’ve seen which includes the option of altering the polar pattern in post-production is the Sennheiser MKH800 TWIN. At £3,276 though, the Sennheiser is in a very different price bracket to the Lewitt LCT 640 TS.

To switch the microphone into Dual-Output mode, we had to add a second XLR cable to a second mic preamp. We used a second CAPI VP28, as this gave us switched gain stages to ensure both the front and rear diaphragms were getting the same gain and colouration from the preamp.

Both diaphragms needed to have phantom power applied and then we were able to engage Dual-Output mode by pressing and holding the centre button on the mic for two seconds.

We recorded the two channels to a stereo channel in Pro Tools, and added an instance of the Polarizer plug-in. This plug-in enables us to then select which pickup pattern we want to use with the signal, comparing the effect of each pattern to select our favourite.

The manual also suggests that if you position the microphone at 90 degrees to the source, you can produce a M/S-style stereo recording with just the one mic.

As technology progresses, and new plug-in formats emerge to replace AU, AAX and VST, it is possible that at some point in the future, you’ll want to use the Lewitt LCT 640 TS without access to the Polarizer plug-in.

While this would be a shame, it would not create an artificial end-of-life for the microphone. It is actually possible to achieve all the various patterns simply by altering the level and polarity of each diaphragm relative to the other.

So, in order to create a broad cardioid pattern, for instance, the rear diaphragm should be 10dB lower than the front diaphragm and in the same polarity.

Flipping the polarity would create a super-cardioid pattern. A data sheet supplied with the microphone provides all of these details.

By enabling you to record both diaphragms, the LCT 640 TS provides something different to most multi-pattern microphones. Of course, it remains to be seen how often engineers would ever want to alter the polar pattern in post-production, rather than simply knowing in advance which pattern is likely to work best.

However, if you enjoy experimenting with recordings, this microphone would be an excellent addition to your arsenal. Furthermore, if you are looking to invest in your first multi-pattern condenser, this can always be used as a standard condenser as well as in Dual-Output mode, and is a great-sounding microphone. A pair would provide a wealth of stereo options. 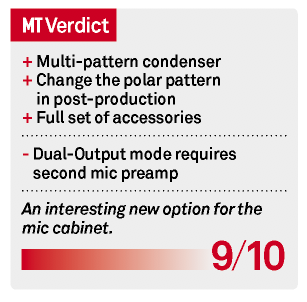