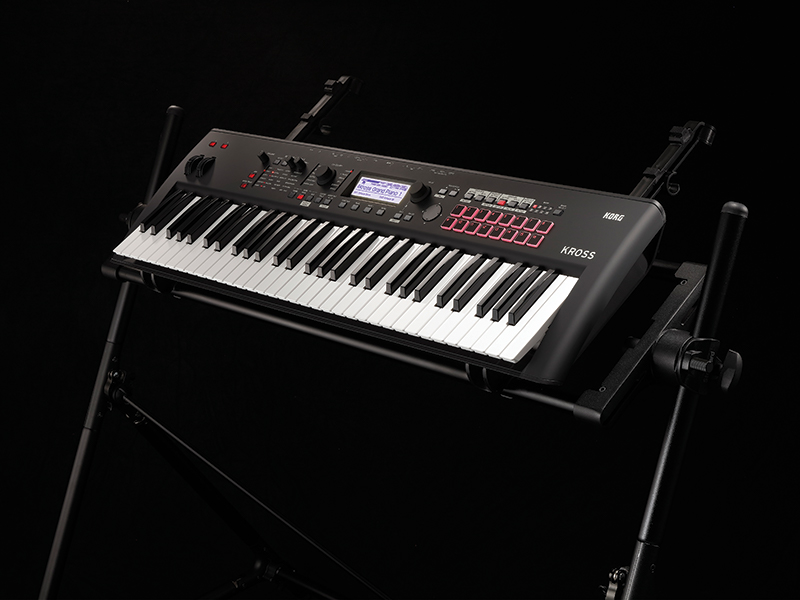 Korg has updated the Kross 2 to appeal more to DAW users. Andy Jones revisits the workstation that does everything, and now has desktop designs…

I looked at Kross 2, the update to Korg’s very popular synth, less than a year ago, concluding that it ‘delivers ultimate, heavyweight synth workstation features in a lightweight and great value package. It demonstrates that, if done right, the workstation concept can be taken on the road and appeal to a whole new generation of composers and performers.’ Then I rather hilariously added ‘there is plenty to get Kross about’. Well, now Kross 2 has been updated (not to 3 – this is rather more like a software ‘point’ update) and now features some intriguing new ways to integrate the synth into your software set-up. Before that, though, let’s get a quick overview of what Kross 2 is all about.

A work station for now

The synth workstation concept has been with us for around three decades, the thinking being that one keyboard can handle everything you need to make a complete piece of music: tracks of synth and real instrument sounds, beats and effects, all put together with an on-board sequencer. Kross 2 is a workstation very much aimed at 21st century touring musicians and studio composers. It is available in as a light-weight 61-notes (streeting at £548) or 88- weighted keys (around £795). It features 1,075 on-board presets and 134 effects.

There’s a whopping 120 notes of polyphony which, alongside the (easy to use) 16-track, 210,000 MIDI event sequencer, allows complete pieces of music to be composed sans computer/DAW. You can also add more sounds via an audio recorder/sampler with 16 pads to trigger them (also used for selecting favourite sounds). There are lots of connectivity options, including inputs for vocoder and audio, and the keyboard will even function as a USB interface. Finally, there’s a very-well featured arpeggiator, and very useful Drum Track feature to auto-play programmable beats with preset sounds.

Kross 2 a bit of a sonic marvel too. Its sound comes from the EDS-i Enhanced Definition Synthesis-integrated sound engine, the same as that used in Korg’s M50, KROME and other instruments. Several parameters within this engine can be controlled with real-time knobs that were new to Kross 2. The resulting presets are, as you might expect, pretty stunning.

The highlights are a huge number of piano and organs; excellent string and synth patches; lots of great electric and acoustic guitars; a great section of synth leads; loads of lovely basses; not to mention some huge Combis where up to 16 sounds can be layered together, or split across the keyboard.

The workstation itself is very easy to use  with a Program Mode for playing individual sounds, Combi Mode is for splits and layers, and Seq Mode for creating songs with the sequencer or using the audio recorder. Navigation is a breeze using the Value dial and cursors to change sounds and then the Page + and Page – buttons to move through the various on-screen tabs.

So with all of those sounds and features, Kross 2 really is a gigging player’s dream, as well as being a great compositional tool. 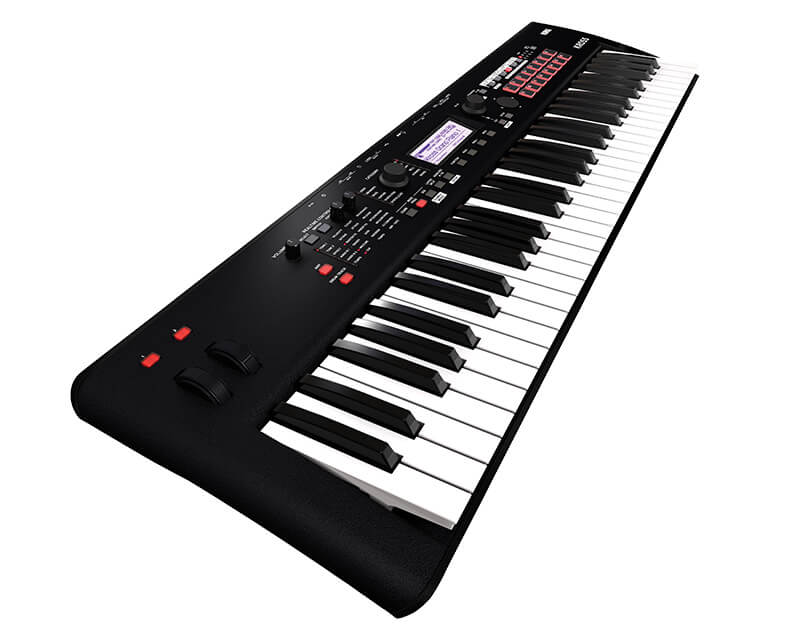 The Kross 2 update includes the ability to handle different audio formats for import and export plus some improvements to real-time vocoder controls. The big news, though, is better software integration with your DAW. You get a Kross 2 editor which can be standalone and also sit within your DAW as an AU or VST plug-in. It doesn’t generate its own audio – it sends MIDI data back out to the Kross 2 – so you’ll always need to have your Kross connected for the two to work together.

The idea is that DAW users can focus on their software worlds and control Kross 2 from one place without having to constantly switch between monitor and keyboard. This is pretty big news as Kross 2 v1 was very much a standalone unit; use it on the road as a gigging instrument or use it standalone to write songs.

Kross 2’s new editor is simply designed to open up the keyboard from the perspective of your DAW, and in that sense it does it rather well. The keyboard is now very much saying to DAW users ‘I’m here and I’m available!’.

You download the editor/plug-in from the Korg website and the AU and VST instrument should be automatically installed when you unpack and install it. In Logic, make sure you have the latest version of Logic installed. I also had to rescan the AU plug-in after it installed and then it ran perfectly.

The VST plug-in worked straight away with Live, so I was happily playing my Kross 2 from within that in no time. At this stage I also tried it with Kross 2 set as the audio interface and that also worked very well, the MIDI from the plug-in triggering the keyboard and mixing the resulting audio with my other plug-ins straight out to the speakers with no issues.

What the editor really achieves is to open Kross 2 up. It is not a hard synth to use – actually it’s one of the easiest ones to navigate – but by its digital nature, a lot of menus are hidden beneath other menus. The plug-in editor has tabs which really help reveal the guts of the synth for editing and tweaking.

I particularly like how the Filter Tab shows so much about the architecture and the routing, plus there’s a secondary layer within it to explore more about the modulation options. Similarly, the Basic Tab really opens up the keyboard zones and Arpeggiator for fast editing and the Seq tab lets you set up groups of sound much faster, while a couple of FX tabs give you more hands-on control over the Insert and Master effects.

It’s perhaps not the prettiest editor, but it does reveal a lot more about Kross 2 and its powerful innards. If you thought this was a lightweight synth, it is, but only in terms of its weight. In terms of its sonics, Kross 2 will surprise you with what it can do, which the new editor highlights. 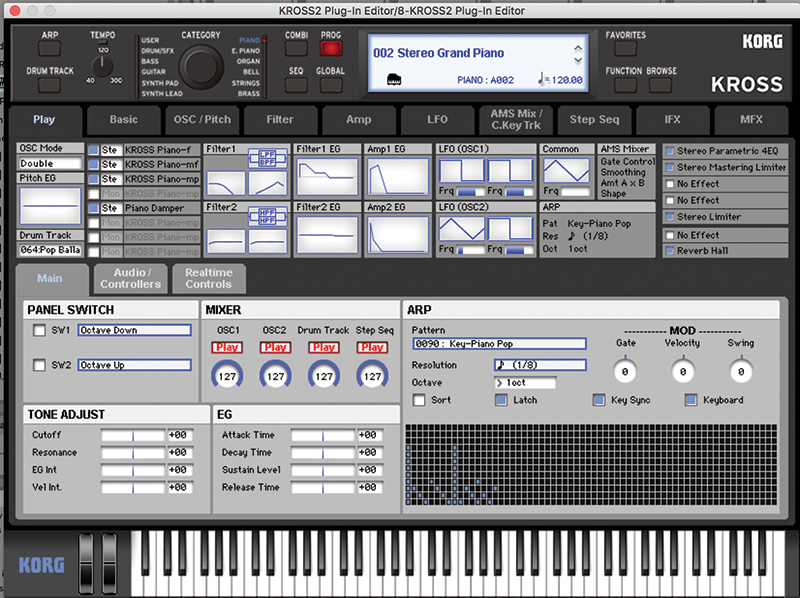 In the Kross 2 Editor plug-n, the top of the screen pretty much replicates the hardware going left to right but tabs like this Play Tab let you go deeper. 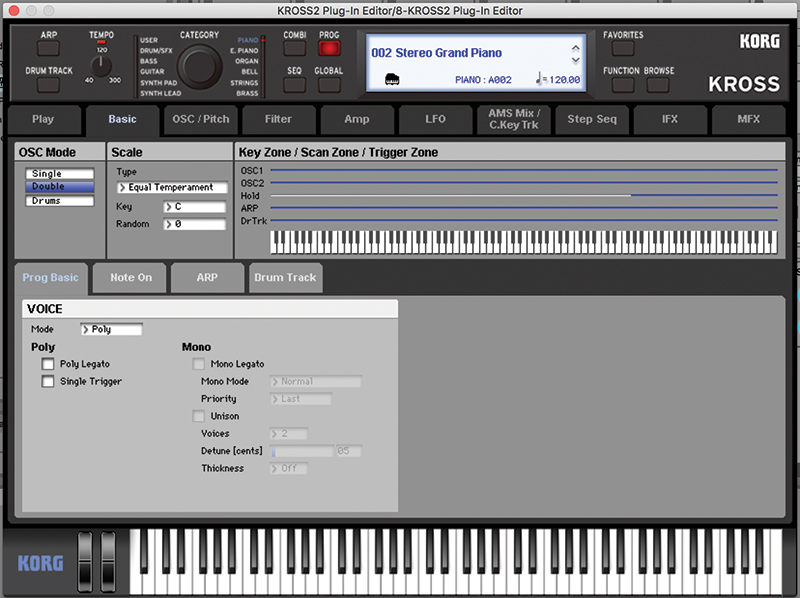 Here you set up Key Zones easily and also set the Arpeggiator pattern (with a graphical version below) and set your pattern for Drum Track. 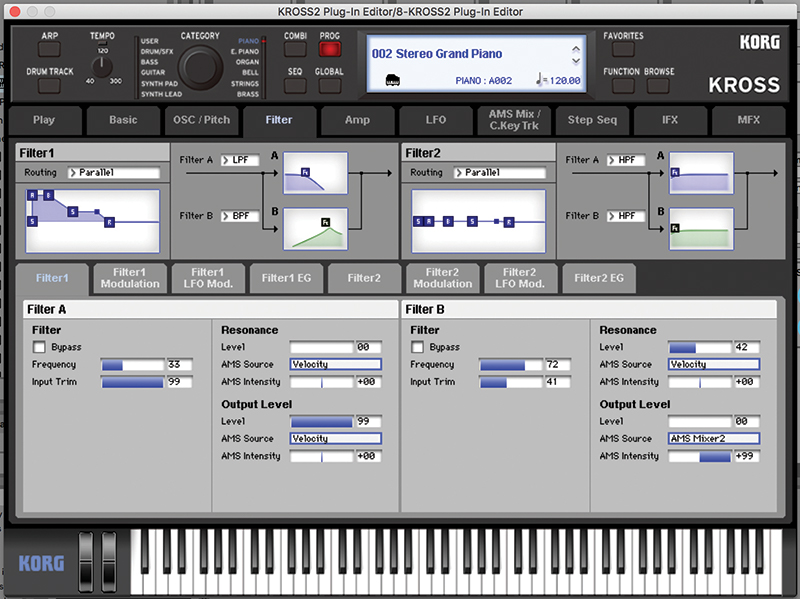 This tab is particularly useful in that you get to see all the routing options and can make adjustments on graphical nodes and go even deeper if you want.

There was already no doubting Kross 2’s credentials as both a composing and performing tool. The new additions now open up the machine to reveal its true power, while making it more attractive to DAW owners. Think about it: a first choice controller keyboard, interface and digital workstation in one, for silly money. Our Gear of the Year awards are hotting up.