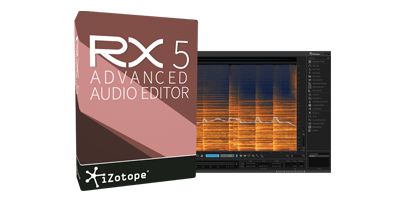 Flawed audio recordings are now a thing of the past, thanks to the audio wizardry behind iZotope’s RX 5 Audio Editor. Mark Cousins takes a listen 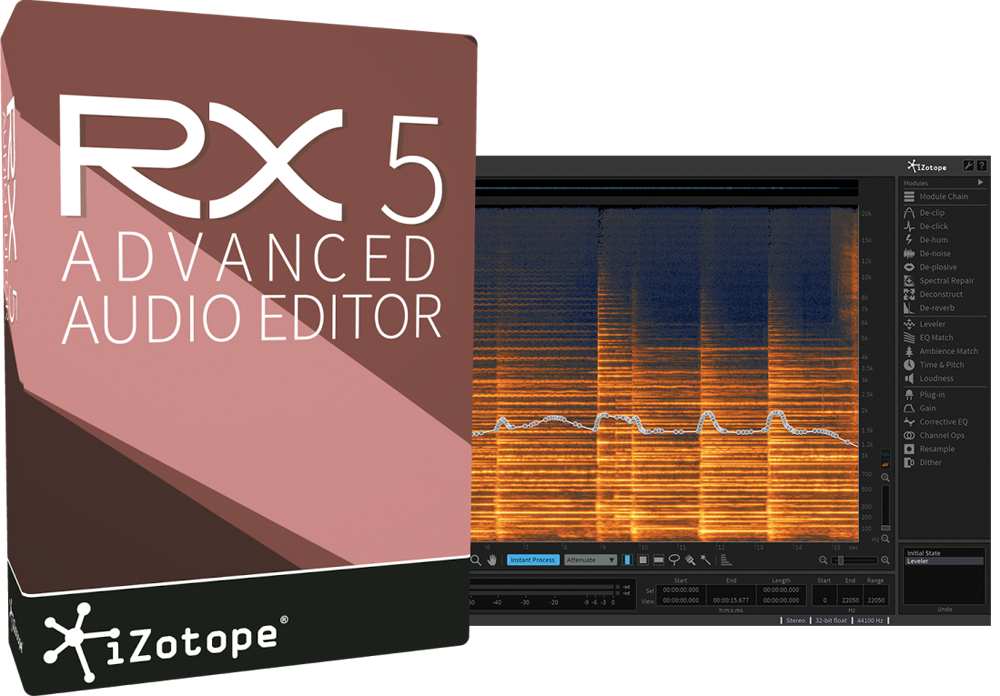 Right from its first product, Ozone, iZotope’s range of software plug-ins has been renowned for its surgical accuracy and precision operation. It’s no surprise, therefore, that iZotope’s RX 5 Audio Editor has come to define itself as one of the leading choices for audio restoration and post production. As well as the usual ‘corrective’ tasks – such as noise removal, click suppression and so on – RX has proved itself to be a boon across a range of production activities.

One of the key factors that has driven the success of RX is its focus on spectral-based processing. As such, RX has always had the ability to work with time and frequency-based selection, all driven from a large spectral display of the file you’re working on.

Combining standalone and plug-in operation, RX has allowed itself to be integrated smoothly into your post production workflow and, with the introduction of RX Connect the integration with Pro Tools couldn’t be tighter. 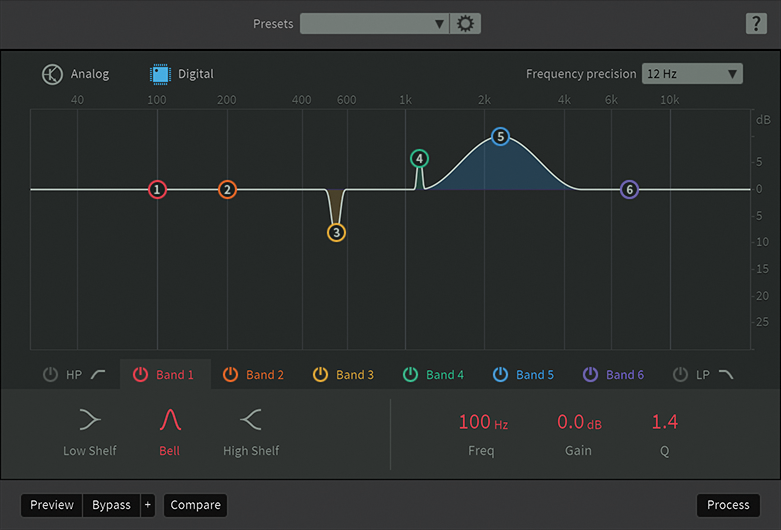 Never wanting to rest on its laurels, iZotope has introduced a range of new features with version 5 of RX. Rather than reinventing the wheel, RX 5 is a gradual evolution of the application and its associated plug-ins, informed by the needs of professionals.

While the improvements are across the board, it seems some of the most noticeable changes relate to dialogue work, including a De-plosive module for removing low-frequency bumps created by Ps and Bs, and an improved Audio Leveller that now includes intelligent De-ess and De-breath algorithms.

Instant Process takes RX closer to almost Photoshop-like retouching of audio files, whereby you can ‘paint out’ a range of audio problems onto the spectral display. Compared to the old system, which required selection first followed by your choice of correction module, the new Instant Process is great for speeding up correction of audio files with flaws.

In-Use Tips
The Standard version of RX 5 is considerably cheaper than the Advanced, so what are the differences? On the whole, the newest modules – such as De-plosive, Leveler and Ambience Match – are available only on the Advanced Version. For the core ‘spectral cleaning’ tasks, the Standard version is near identical, and now includes features previously available only in RX 4 Advanced. 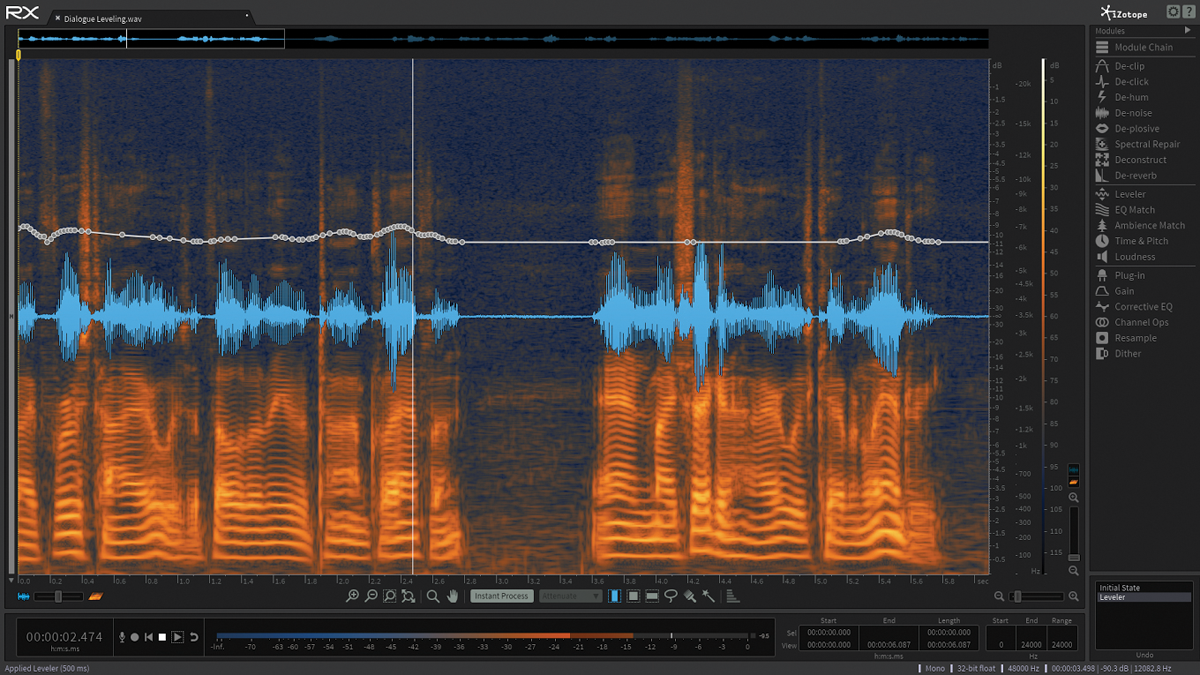 Audio Hygiene
The new Module Chain feature allows you to link a series of modules to work as a ‘one-click’ repair. So, in the example of dialogue improvement, a module chain could include De-plosive followed by De-noise and Leveler. By designing your own Module Chains, with the ability to quickly drop them in and out on a file-by-file basis, you can soon see how repetitive, multi-stage restoration tasks can be optimised intuitively.

There are a wealth of other improvements – an updated EQ module, now called Corrective EQ, has an Ozone-like visual and sonic finesse, although it might have been useful to have an in-built FFT display.

It’s also good to see Ambience Match embedded into Pro Tools as an AudioSuite plug-in, where its ability to fill background noise between edit points is welcome. It’s worth noting, too, that some Advanced features – such as the DeReverb module – have made their way onto the standard version. 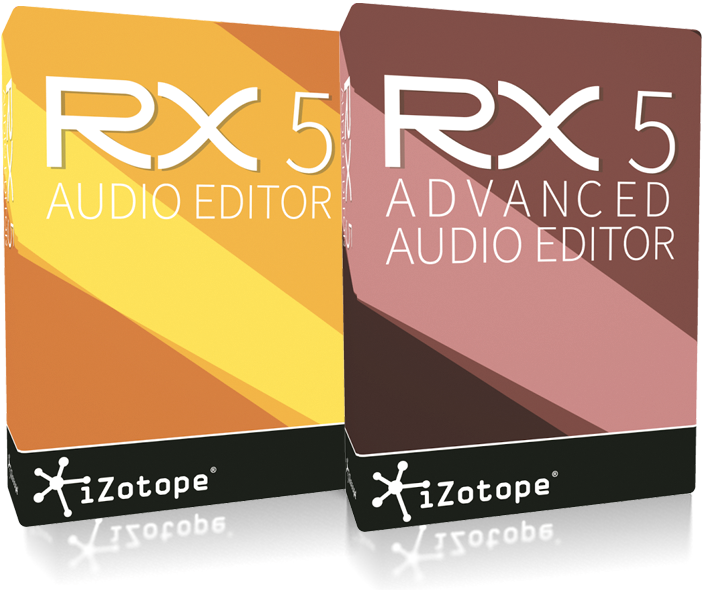 The improvements offered in version 5 further RX’s position as a leading audio restoration and post production solution. These incremental changes show iZotope is keen to develop the application and plug-ins in a way that aligns itself with its users’ workflow. So, while the list of new modules is relatively light, the raft of operational tweaks mean RX 5 is the most sonically and time-effective tool available to the post-production fraternity. 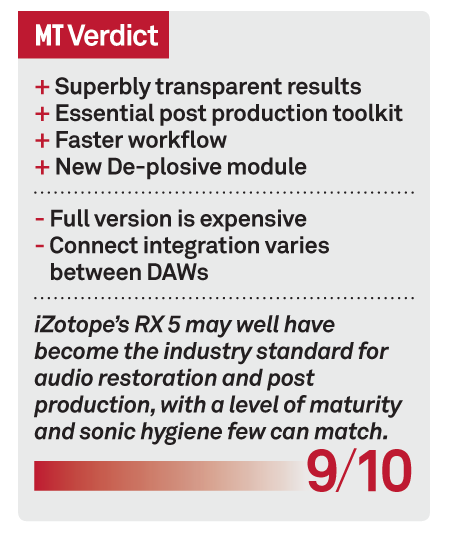