When we reviewed the first version of Alloy, iZotope’s all-in-one mixing channel strip, back in January 2010, we were impressed by its range of features and the way in which it complemented Ozone 4. However, a few years on, the release of the superb Ozone 5 – which has had a substantial overhaul – has […] 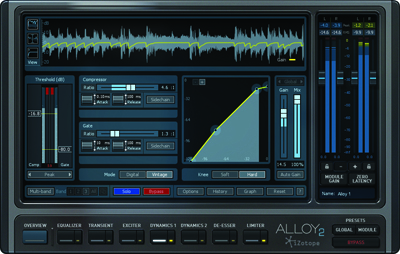 When we reviewed the first version of Alloy, iZotope’s all-in-one mixing channel strip, back in January 2010, we were impressed by its range of features and the way in which it complemented Ozone 4. However, a few years on, the release of the superb Ozone 5 – which has had a substantial overhaul – has significantly raised the bar. Not happy to rest on their laurels, the iZotope team has seen fit to do the same, sprucing up Alloy 2 with improved features and a more streamlined GUI. 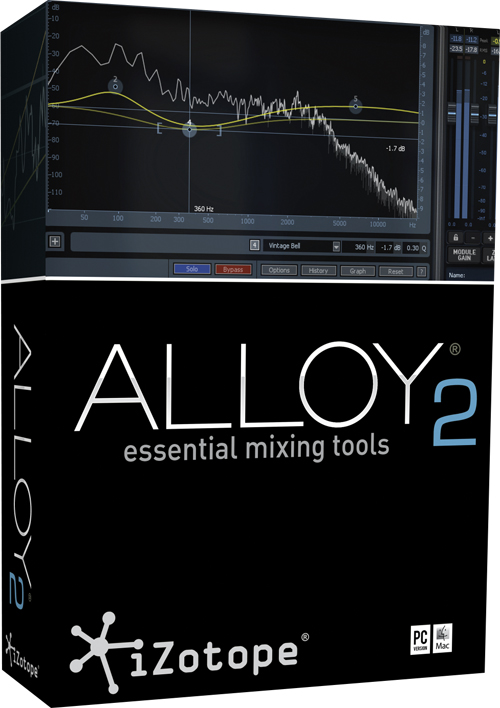 For the uninitiated, Alloy 2 is mixing channel strip plug-in that can be used on individual tracks or group busses and includes an EQ, multiband transient shaper, multiband exciter and stereo widener, two multiband dynamics modules, a de-esser and a limiter. Although these same six modules remain from version 1, each has received a few tweaks under the hood (with the exception of the de-esser, which remains the same). Notable improvements include new brickwall, vintage bell and Baxandall EQ filters, a redesigned and more natural-sounding exciter, completely reworked and easier to use transient shaper, unlinked stereo limiting and more flexible sidechain options for the dynamics modules. On top of this, the main difference is the larger and clearer GUI, which now bears more of a resemblance to Ozone 5 and brings with it some of the excellent metering and visual feedback tools. Gone is the slightly fiddly macro controls system; in its place is a simple overview screen that gives access to the main controls and adapts to show only those modules that are enabled. Other additions include presets for the individual modules and the ability for Alloy 2 to automatically show up as a meter tap with Ozone 5 Advanced’s Spectrogram.

The most important thing for a plug-in of this type is that it gives good results quickly, and it’s here where Alloy 2 excels. Through years of GUI programming, iZotope has perfected the art of providing sufficient controls to be flexible while keeping things simple enough to feel quick and intuitive. The visual feedback is second to none, with the transient shaper, dynamics, de-esser and limiter all featuring meters that show exactly how each transient hit is affected by the processing. This makes dialling in mix decisions and training your ears a whole lot easier as you can see exactly what’s going on.

The real jewel in the crown, though, is the multiband transient shaper, which enables you to set different transient characteristics in each frequency range, allowing you to tighten the release of snares and hi-hats while adding bulk and sustain to a kick. The dynamics section is also highly flexible, with an individual sidechain system for each band that can accept an external input or signal from the other bands.

The saturation has been greatly improved from the previous version, and it’s now much easier to call up effective sounds. Although it’s not the best we’ve heard, it’s still a decent tool for subtle sound-shaping and fattening sounds. We managed to get a large number of instances running at once in a project, and by tweaking several of the excellent included presets we were quickly able to improve on an old mix.

Tools Of The Trade

If you already own Ozone 5 or the previous version of Alloy you may initially think twice about purchasing Alloy 2. However, iZotope is offering a very reasonable upgrade price and the improvements in workflow and sound are instantly noticeable. While Alloy 2 may not have the exquisite sound of expensive hardware-emulated software, it is still a high-quality plug-in. What you get is an incredibly focused set of tools with unsurpassed visual feedback. This makes it much easier to make the right mixing decisions and will ultimately give you a better mix.

+ Eight processors in one

+ Flexible and easy to use