The latest mini-keyboard from IK Multimedia fills a gap in the market, will it revolutionise your mobile-based setup… Manufacturer IK Multimedia Price €120 Contact via website Web www.ikmultimedia.com Back in the far flung past (i.e January 2016) at NAMM we attended the IKM press conference, it was certainly one of the most packed of the show such is the […] 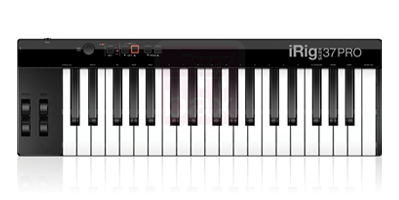 The latest mini-keyboard from IK Multimedia fills a gap in the market, will it revolutionise your mobile-based setup…

Back in the far flung past (i.e January 2016) at NAMM we attended the IKM press conference, it was certainly one of the most packed of the show such is the company’s assault on the music production world with product after product for the mobile and budget musician.

We’ll be covering some of those new releases soon – including the ‘smallest studio monitors in the world’, but until then a quick catch-up and we’ve finally got our hands on the iRig Keys 37 Pro USB.

First impressions are pretty good, because in a world of keyboards currently dominated by mini keys – and lots of angry players because of it – this keyboard manages to cram full-sized keys into a very small footprint. 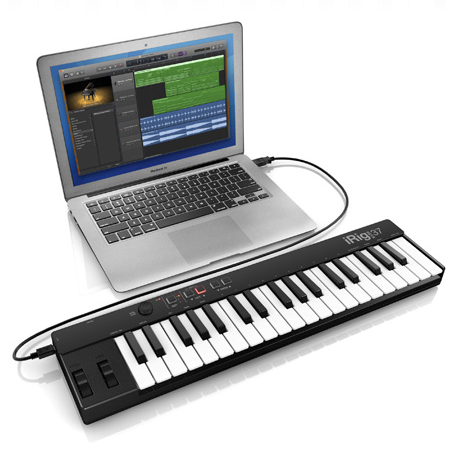 OK, there’s not much else going on: an assignable volume rotary knob, Octave and Program up and down buttons plus four Set locations. These are to store up to four keyboard set up settings (MIDI channel, button assignments and so on), and while four is good, obviously more of these would have been handy (tease us, we want more!).

The keyboard is very playable, but by no means absolute top quality, but it is certainly good for the money and better than some models costing a lot more, or with smaller keys. The build quality of the unit is OK, a bit lightweight maybe, but getting it up and running with our DAW was probably the easiest plug n play experience we’ve had. No drivers to load, plug it in and, well, play!

As ever, the software package with these things is good – especially as you get a choice of five instrument collections. And after playing iRig Pro 37 for a while during our tests, we think it is a good buy, but there are marginally more expensive keyboards from Alesis that will give you a bigger playing experience and marginally cheaper ones with mini keys to give you a more mobile one. IK thinks it has filled a gap in the market, then, although we can’t help thinking that proper ‘players’ might be willing to forego mobile and just go big. As ever, you will decide… 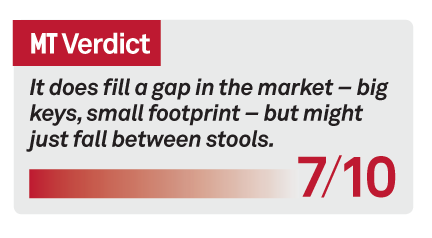