Can the Black Box HG-2 plug-in deliver the same analogue-tube magic of the original hardware unit? Alex Holmes loads up a mix and prepares to put on some weight…

Released under two years ago, the HG-2 hardware box quickly became a mix-buss favourite for many engineers around the world. It is praised for its ability to add subtle harmonic colouration and sparkle without compromising quality, and to make tracks sound richer, fuller, louder, bigger and punchier at the same peak level. Black Box Analog Design has now teamed up with Brainworx and Plugin Alliance to produce a plug-in version, so you can enjoy its analogue loveliness from the comfort of your favourite DAW.

The plug-in emulates the input and output transformers, plus the four different vacuum-tube stages of the original unit including the main 6U8A pentode and triode tubes that run in series. You have two large dials to control how hard you hit these tubes, plus a parallel saturation path where you can alternate between two other, differently voiced 12AX7 tubes. This parallel circuit has a low, flat and high frequency selector, so you can feed some focussed crunch back into the main signal path. There’s also an Air button and Air Amount dial, that can be used to add some beautiful sheen above 10kHz. In addition to the original hardware controls, you also have a Mix dial for parallel processing; an Input control; a Density dial that balances the input and output at the same time, so you can drive the tubes harder while keeping the volume the same; and an internal trim calibration that modifies the frequency response to Dark, Normal or Bright colouration.

It’s quite a lot to take in at first, and the signal flow and gain staging take some getting used to, but experimentation on different material can help you understand the kinds of sounds that the HG-2 is capable of. Whether you’re using it on a specific kick drum or vocal track, on a whole drum buss or on the entire mix, the HG-2 can add subtle warmth and shimmer, or aggressive analogue-sounding distortion.

One of our favourite things to do was to set the filter to high and add some air, then set the mix to 50 per cent and volume-match it with the original. This actually opened out the top end while clearing out some resonant mid- and low-midrange frequencies. Similarly, we placed the HG-2 on a drum mix that lacked weight, and set the saturation to Low, then tweaked parameters to add some tube weight, while leaving the top end relatively untouched.

Although the wet/dry mix control is a fantastic addition for parallel processing, it would have also been useful to have a final volume control so you can accurately volume-match when bypassed. Considering how much is going on under the hood, it’s been well optimised for CPU usage, and we were able to get over 30 instances running on a 2011 Mac Book Pro.

The HG-2 may not be the most versatile plug-in for full-on sound design, but as an overall sound-and-mix shaper it’s surprisingly flexible and the sound quality is exceptional. With a bit of tweaking, everything we put through it we managed to make sound better. Possibly the best praise we can give is that it’s arguably the closest we’ve come to date to adding analogue-sounding mojo in the box, and it’s definitely found a permanent home on our mix buss. It’s not especially cheap, but if you can snap it up in one of Plugin Alliance’s regular sales, then it’s a no-brainer.

There’s no shortage of saturation plug-ins including Wave Arts’ Tube Saturator 2 ($99), which is an excellent emulation but with a smaller sound palette; or for more extreme sounds, there’s SoundToys’ Decapitator ($199). PA also have the Vertigo Sound VSM-3 ($299) which generates different flavours of harmonics and also has M/S. 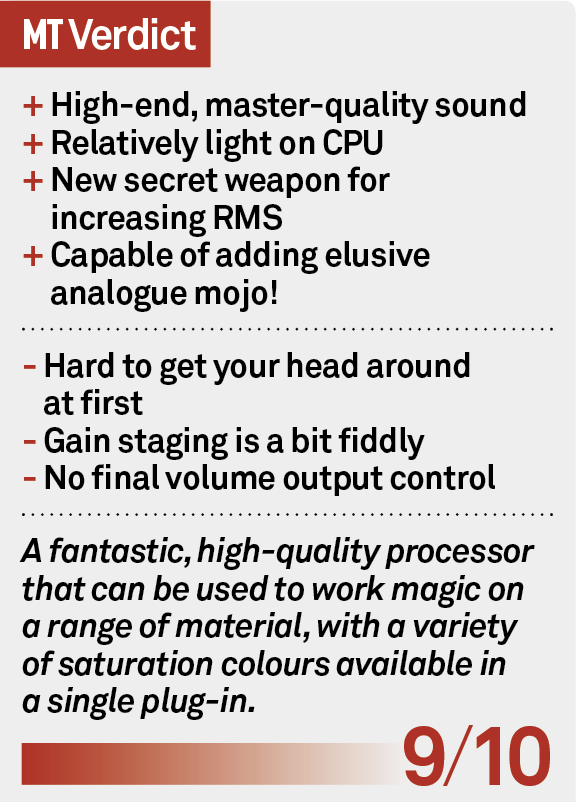