Adam Crute investigates whether NI’s Solid Dynamics software can out-perform the high-end console dynamics processor it is based on… A few weeks ago I compared an SSL XR625 EQ module – taken from their 9000K-series mixing consoles – with Native Instruments’ Solid EQ, a software emulation of the same EQ circuit. As a recap for […] 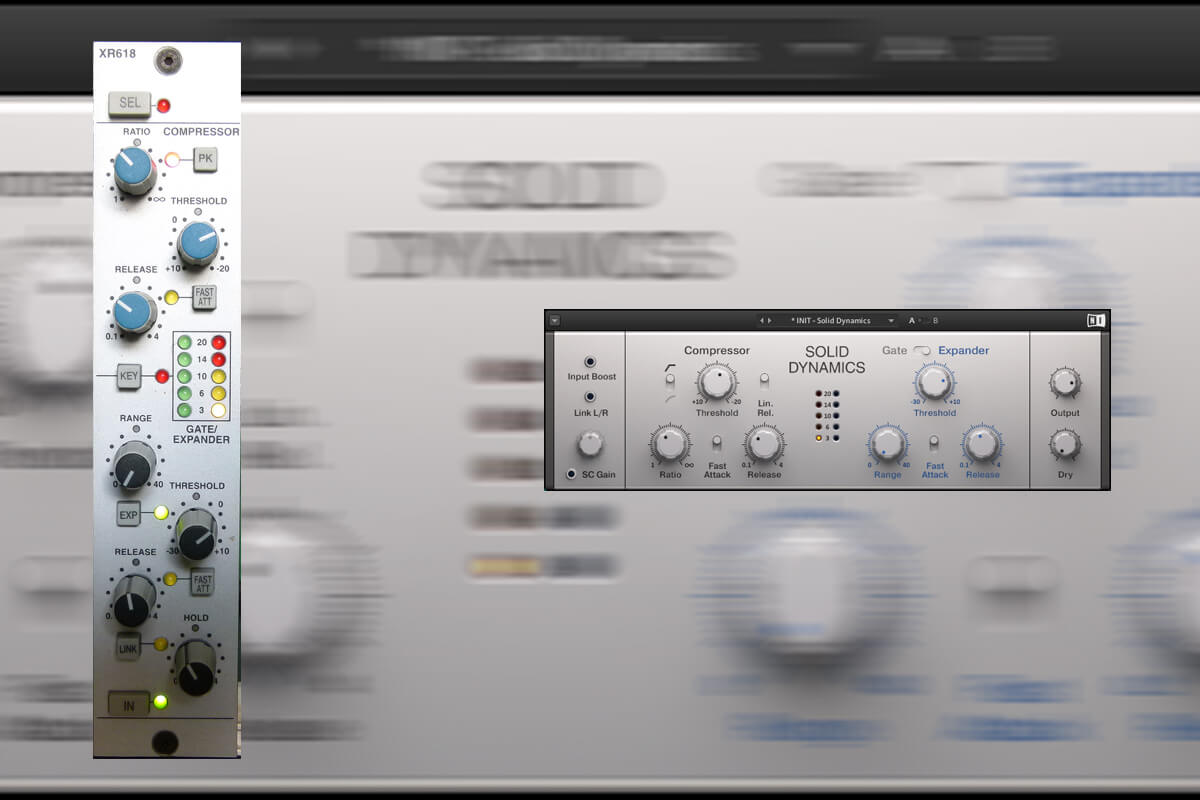 A few weeks ago I compared an SSL XR625 EQ module – taken from their 9000K-series mixing consoles – with Native Instruments’ Solid EQ, a software emulation of the same EQ circuit. As a recap for those who didn’t catch that (you can read about it here), I found that whilst the SSL hardware just edged things in terms of sound quality, the plugin was a close enough sonic match that its cost, flexibility and practicality saw it win the day.

Undaunted by this surprise victory for inexpensive software over expensive hardware, this time around I’m pitting an SSL XR618 Dynamics processor against NI’s Solid Dynamics plugin.

The hardware is part of SSL’s X-Rack series of analogue processors – small modules featuring circuitry taken directly from their high-end mixing consoles, and which are mounted into either an 8-module X-Rack chassis or a two-module Mynx chassis. The XR618, then, is the dynamics processing module from an SSL 9000K-series mixing console, and features both a compressor section and an expander/gate section.

In terms of tonal characteristics, though, there’s not a lot to choose between 9000K-series and E-series dynamics processors, although the latter is generally considered to be slightly warmer-sounding than the former. (Incidentally, SSL do also produce an E-series dynamics module for X-Rack: the XR418.)

NI have introduced a couple of features in Solid Dynamics that aren’t present on the hardware: an input boost switch that adds 10dB to the input signal, and output gain and dry mix controls. These additions are sensible enough for a software plugin operating in the digital domain, but would be needless additional circuitry on the XR618.

In use, Solid’s compressor section compares well to the XR618 when using gentle compression settings, but as you drop the threshold and increase the ratio the SSL takes a clear lead: Where the XR618 creates an increasingly warm, smooth, even fuzzy, sort of sound as the gain reduction ramps up, the Solid Dynamics delivers a very clean sound, but takes on an increasingly forced and squished-sounding character.

When comparing the expander/gate sections of the two processors, the XR618 again gives better results than Solid Dynamics, being easier to set up and creating a gentler, more natural sound.

One of the roles of the dynamics section on a large mixing console is to control and condition an input signal prior to AD conversion and recording. Clearly, this is something that Solid Dynamics – in common with all other software processors – simply can’t do; the XR618 excels in such a role, though, and could be considered to be more flexible than the software as a result.

None of this should be seen as casting aspersions on Solid Dynamics – it’s a very good processor and, being software, is considerably more cost effective and practicable than external hardware: £89 for as many Solid Dynamics instances as your computer can handle as opposed to £639 for a single XR618 module. But when listening to the rich analogue sound of the XR618 it’s obvious where all of that money has gone, and undeniable that Solid Dynamics sounds markedly different.