Roland bolsters the Aira range with the MC-707 – complete with beats, sounds and effects – but is this a groovebox fit for the 21st century? 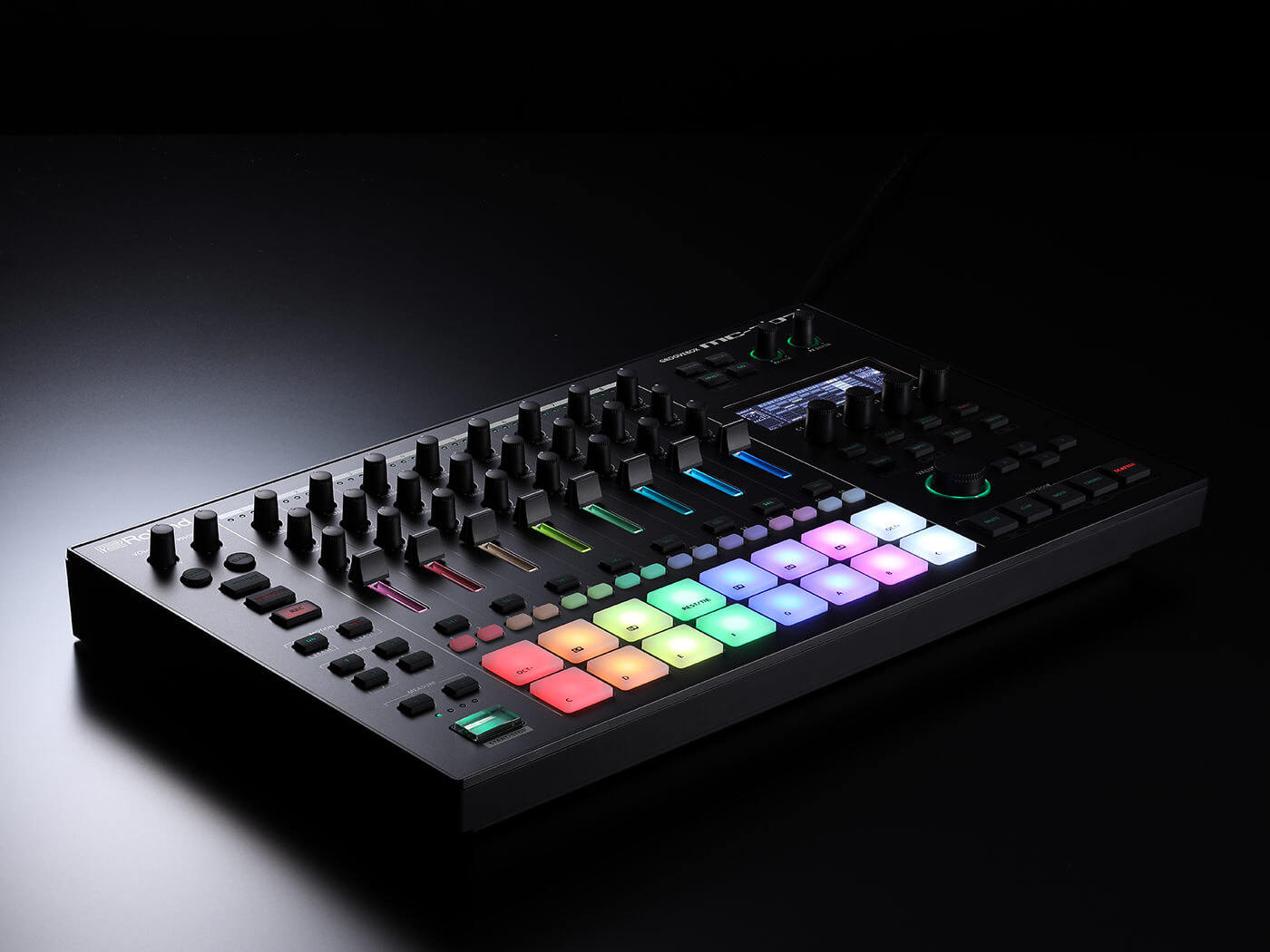 At the start of the 21st century, using computers to perform music was sexy, and hardware got dusty as software helped us create powerful and portable rigs. It was liberating, and it was democratising, as long as you could afford some kind of laptop. Hardware never totally lost its allure though, and companies like Elektron kept the all-in-one groovebox flag flying with idiosyncratic devices such as the Machinedrum and Octatrack.

In recent times, manufacturers such as Akai, Korg, Novation and Roland, have revisited the groovebox concept and interpreted that in the light of their own experiences and marketing needs. (Let’s agree that a ‘groovebox’ is a standalone music instrument that combines beats, melodies, and sequencing, sometimes with extras such as sampling and effects). As far as Roland is concerned, it’s all about the Aira range, and the latest incarnation of this is the MC-707.

The package contains the MC-707, mains power supply, and a brutally-short printed manual. Go to the Roland website to download the full 121-page manual, a MIDI implementation chart, and a 57-page sound list – there are way more sounds in here than you might guess from looking at it.

The top panel of the 707 includes master volume and phones controls, navigation and function buttons, and a mixer section, where each track gets a volume fader as well as filter, mod, and fx knobs. Below this are 16 sequencer buttons and 16 larger backlit multi function, velocity-sensitive, pads. At the right are master effect controls, and the all-important display, essential for navigation and editing. The rear panel hosts power input, power on/off, USB port, MIDI in/out/out, SD card slot (card included), external audio inputs, stereo send and returns, two assignable outs, mix out, and headphones. All audio connections are 1/4”, which is just how it should be. The casing is disappointingly plastic-feeling and lightweight for something that costs over £800. 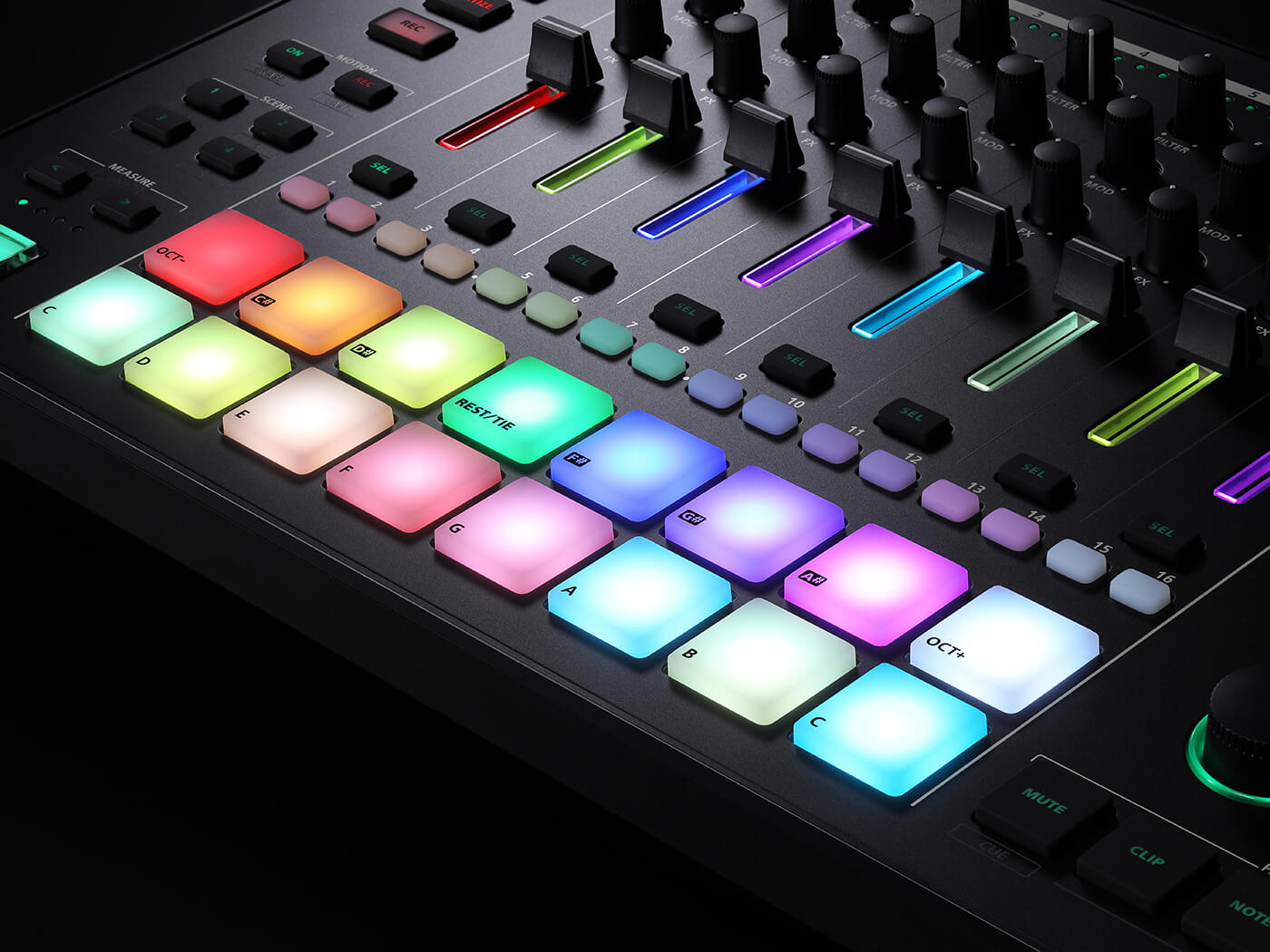 Setup is easy: just add mains power and headphones. Projects, clips, and samples are accessed from the SD card and demo content is provided alongside over 3,000 instrument and 80 drum kit presets. The buttons aren’t grouped in a particularly logical way, with the Shift and Project buttons located way over on the left, while all other navigation and function buttons are on the right near the display, but I learn fast enough, and the process of creating a project feels smooth. You add a beat and then an instrument part, using the large pads as a simple one-octave-at-a-time keyboard, or using the 16 sequencer buttons, and on and on from there. There’s also a chord mode, where you can assign chords to specific pads, which takes a bit of thought to set up but works well.

The pads aren’t particularly sensitive, although the response can be tweaked in the system menu. There are eight tracks available per project, with three types of track to choose from: Tone (pitched instruments), Drums, and Looper (samples). There’s also a semi-extra track type – Drum+Comp – which can only be used once in a project, and reduces the available looper track count to five.

The instrument library is impressively varied, and you’ll find what you want, whether it’s bass, brass, guitar, leads, pads, piano or orchestral. These sounds use Roland’s new ZEN-Core sound engine, based on a combination of virtual analogue and PCM samples. There are plenty of editing options available, especially once you enable the Pro editing mode. The sounds are credible and useable, and impressive for this type of machine, especially once edited and combined in a mix. Drums of all type are well represented, including EDM, 909, 808, and other Roland kits, plus acoustic studio, 90s percussion, jazz and orchestral kits. This box isn’t limited to what you’d pigeonhole as ‘dance’ sounds. 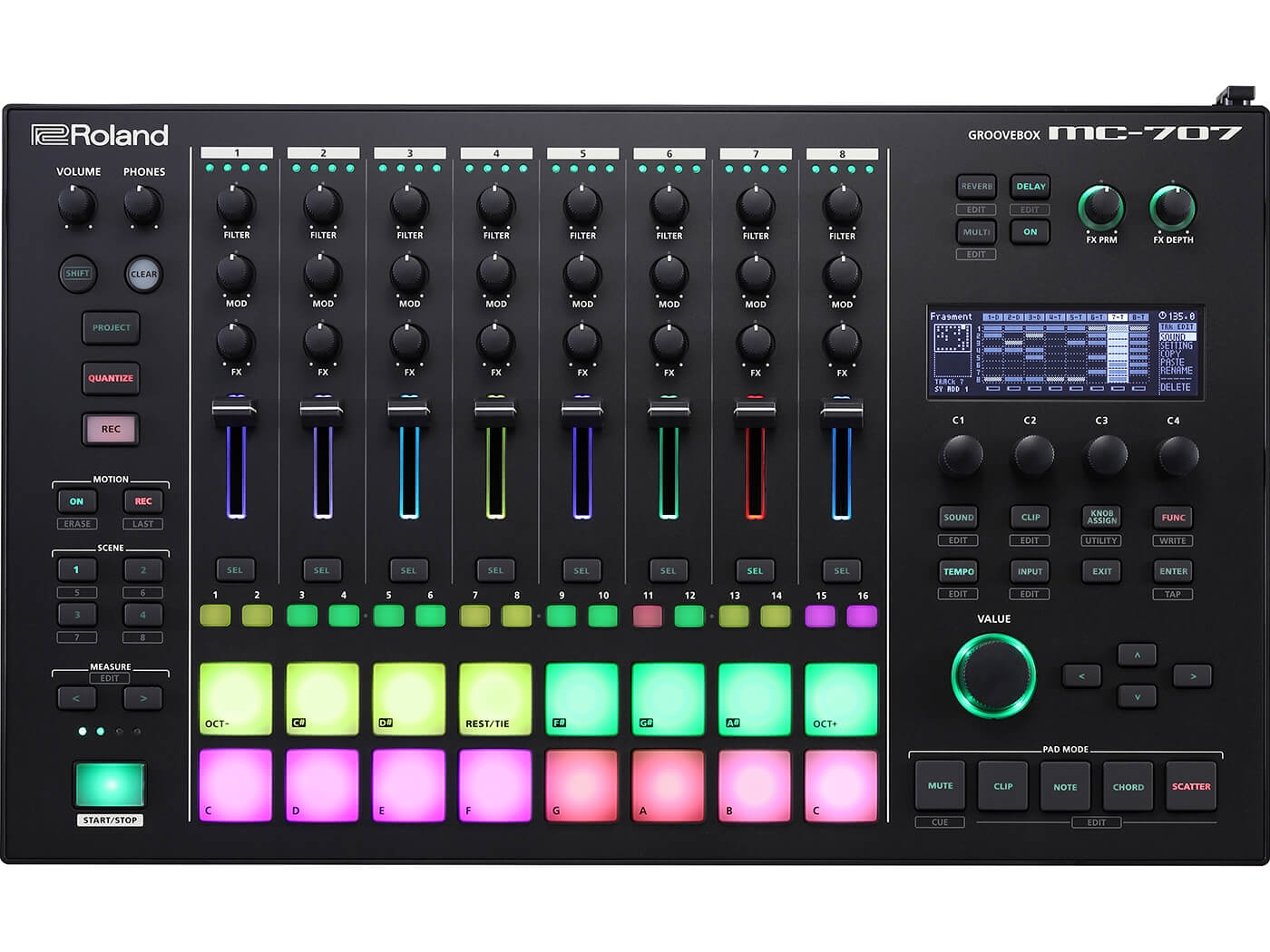 Samples can be imported via USB or SD, or recorded directly, with a maximum individual sample time of 60 seconds and six minutes stereo total. The Looper has controls for pitch, speed, duration and playback as forward or backward loops, or one shots. There’s no onboard slicing, although we do get two time-stretching options: Type 1, optimised for melodic parts, and Type 2, optimised for beats. After loading a sample the Looper track mixer knobs default to pitch/reverse/reverb, although they can also be user-assigned up to a point, with available parameters such as tuning, portamento, and filter parameters, and it’s possible to record real-time movements for each track – using the Motion control – resulting in an editable event list afterwards if you need to tweak your, er, tweaks.

High-quality effects include EQ, delay/chorus, distortion, ring mods, and various phasers. The MC-707 also features the Scatter effect, which will slice your parts according to individual settings for each of the large pads. Maybe a cliche at this point, but that doesn’t mean you won’t use it and enjoy it – I did! The now-familiar principle of clips and scenes is used here to trigger playback of parts and sections, with up to 16 clips per track, and eight scenes, you can get a project overview and launch clips and scenes from the display, or with the big pads. MIDI’s available via USB, as well as with In and two Outs on regular DINs. Sadly there’s no way to import or export MIDI files, which would add a bit more flexibility. Although there’s only a hardware stereo out, each individual track can be captured via USB, so you could use, say, Ableton Live, to capture audio and MIDI from each track in real time to separate tracks in a Live project.

Airas have many fans, as I’ve witnessed when I’ve showed the MC-707 to excited producer friends. The track and clip count on it is limited, and the display is a little old-school, and so is the sampling, but what makes it more interesting is the range and editability of the instruments.

Everybody supposedly wants ‘DAWless’ right now, and that’s perfectly achievable for live performance, but you’re still gonna need something at home/in the studio to capture, mix, and master your tracks for distribution. In that light, export to Ableton projects on the SD card would be appreciated, so tracks could be finished with all the benefits of a computer. If this was the only bit of music gear you had, you could definitely create and perform music with beats and melodies without needing other hardware, and that’s probably the most important characterisation of an effective groovebox. 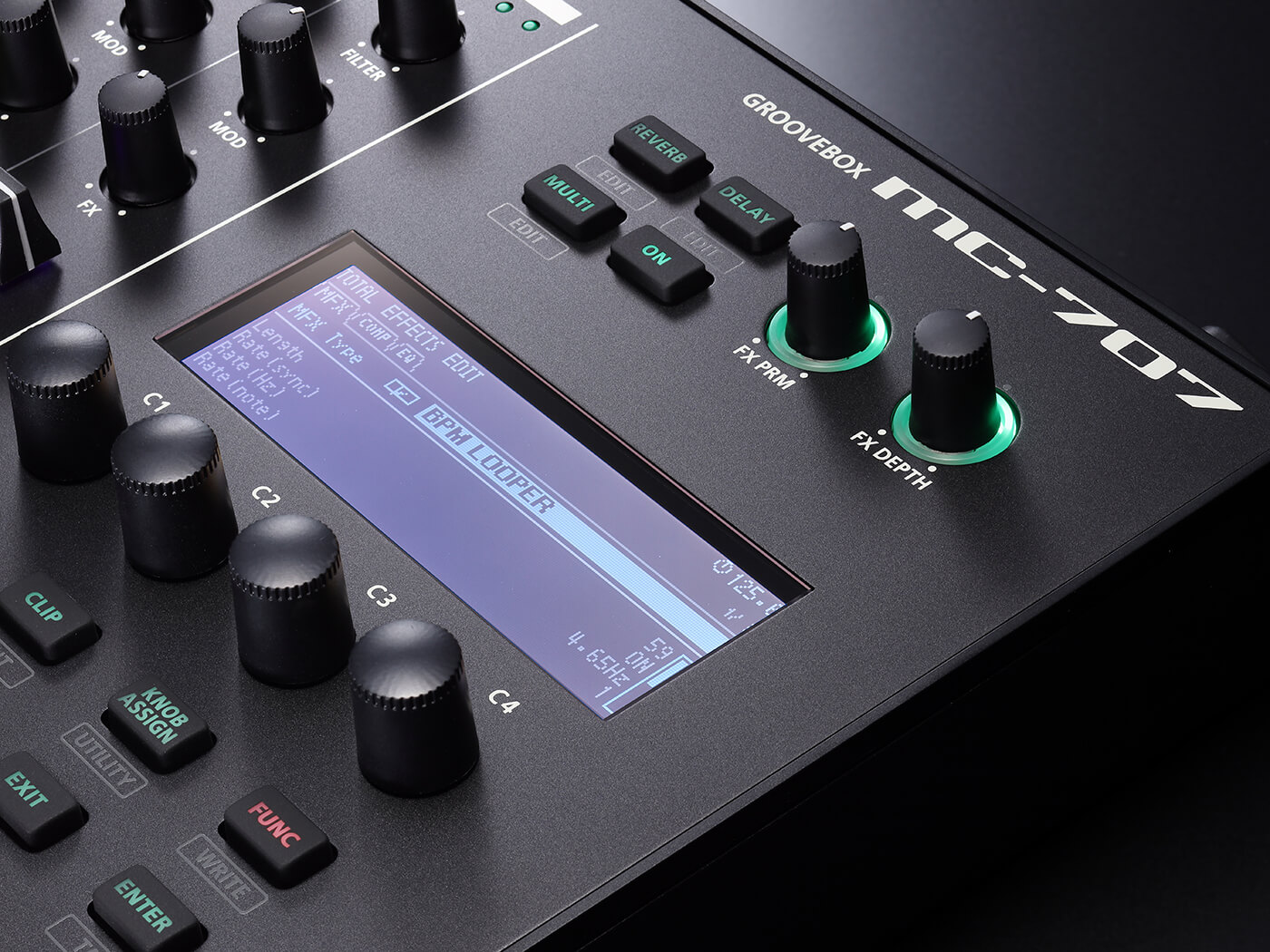 If you’re a fan of Roland’s previous Aira products, you’ll be all over this. As to how essential it is, that depends on what other gear you already have, and how you like to work. Although it has a hefty price tag, the MC-707 is not overly complex to use, which probably means it’ll appeal to beginners or to, maybe, the tech-curious DJ who wants to sync with their decks.

This could be good for live gigs, although hardware competition is fierce around this price point, and there’s always the software-with-controller option. You don’t ‘need’ this at all, but if you’re the Aira fan-person mentioned earlier, or you want to enjoy standalone groovebox action without doing your head in too much, this is one to investigate.

An overview of Roland MC-707 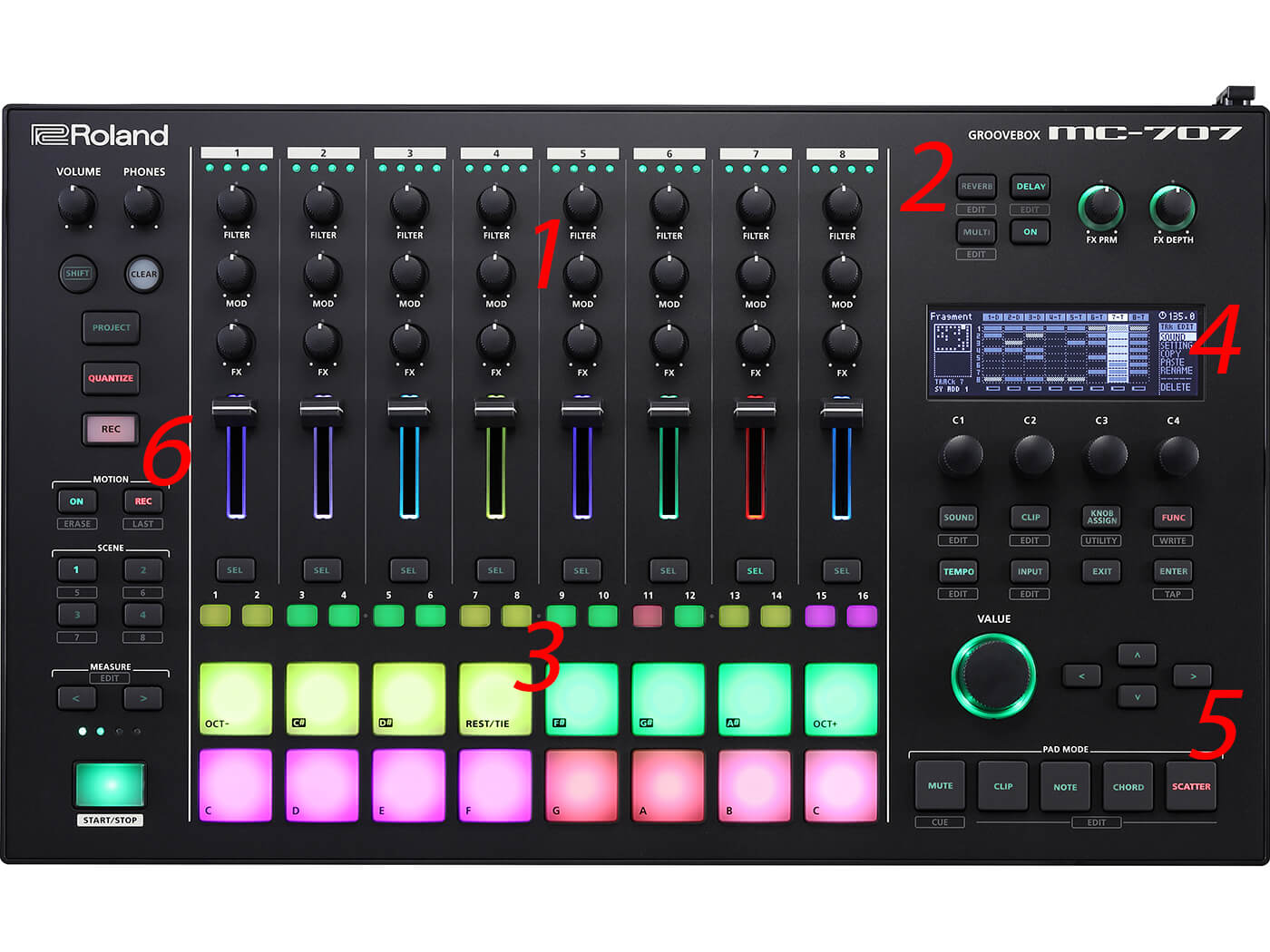 1. Mixer section
The MC-707 has eight channels in total, each with its own volume fader, while a knob at top left of the unit handles overall master volume level. The large pads below can be used for track mute functions.

2. Effects
The top right section covers master effect selection and editing. There are Filter, Mod and FX (which depends on what’s loaded in the track) controls above the central faders, and the bottom pads can be put in Scatter mode.

3. Pads
There are 16 velocity-sensitive multi-colour RGB pads, which are assigned by the bottom-right buttons to various functions such as Mute, Clip or Scene Launch, Note or Chord triggering, or the previously mentioned Scatter effect.

4. Display
This basic but functional monochrome display is where you can view your organisation of clips and scenes, edit sample or instrument parameters, or browse the SD card for projects, kits, or samples.

5. Pad mode buttons
Use this row of buttons to set the behaviour of the large pads along the bottom of the MC-707; the Scatter and Chord modes are lots of fun. Scatter is very instant; Chords, not so much.

6. Motion controls
Motion is a great way to add automation and movement to your projects. Use these controls to commence recording, then to toggle the automation on or off; editing is available too, via a list in the display. 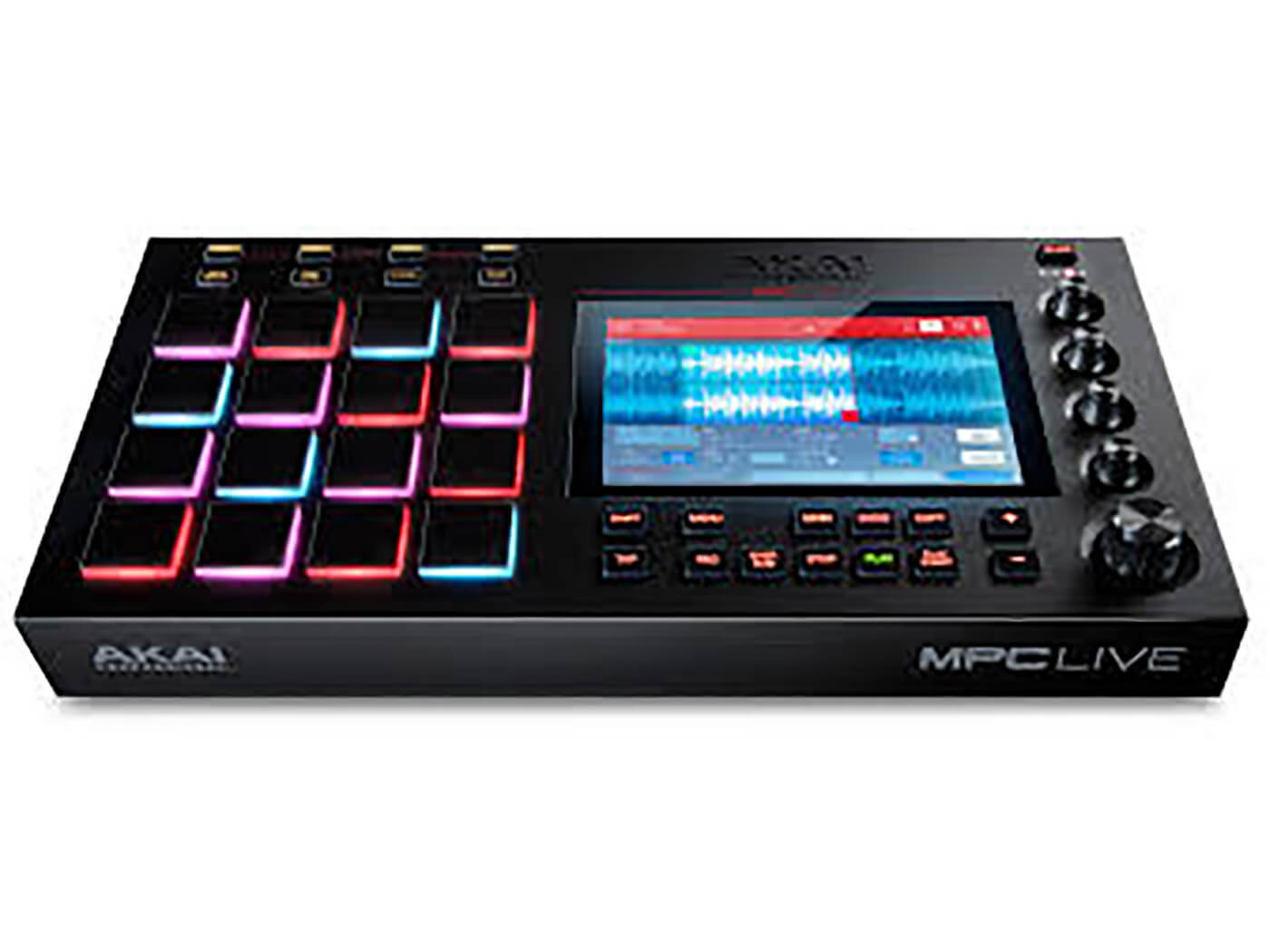 In the same price range, this has a different set of priorities, with a more rugged build, beautiful workmanlike pads and large touch screen, with tons of control and arrangements too. The workflow and layout isn’t for everybody. 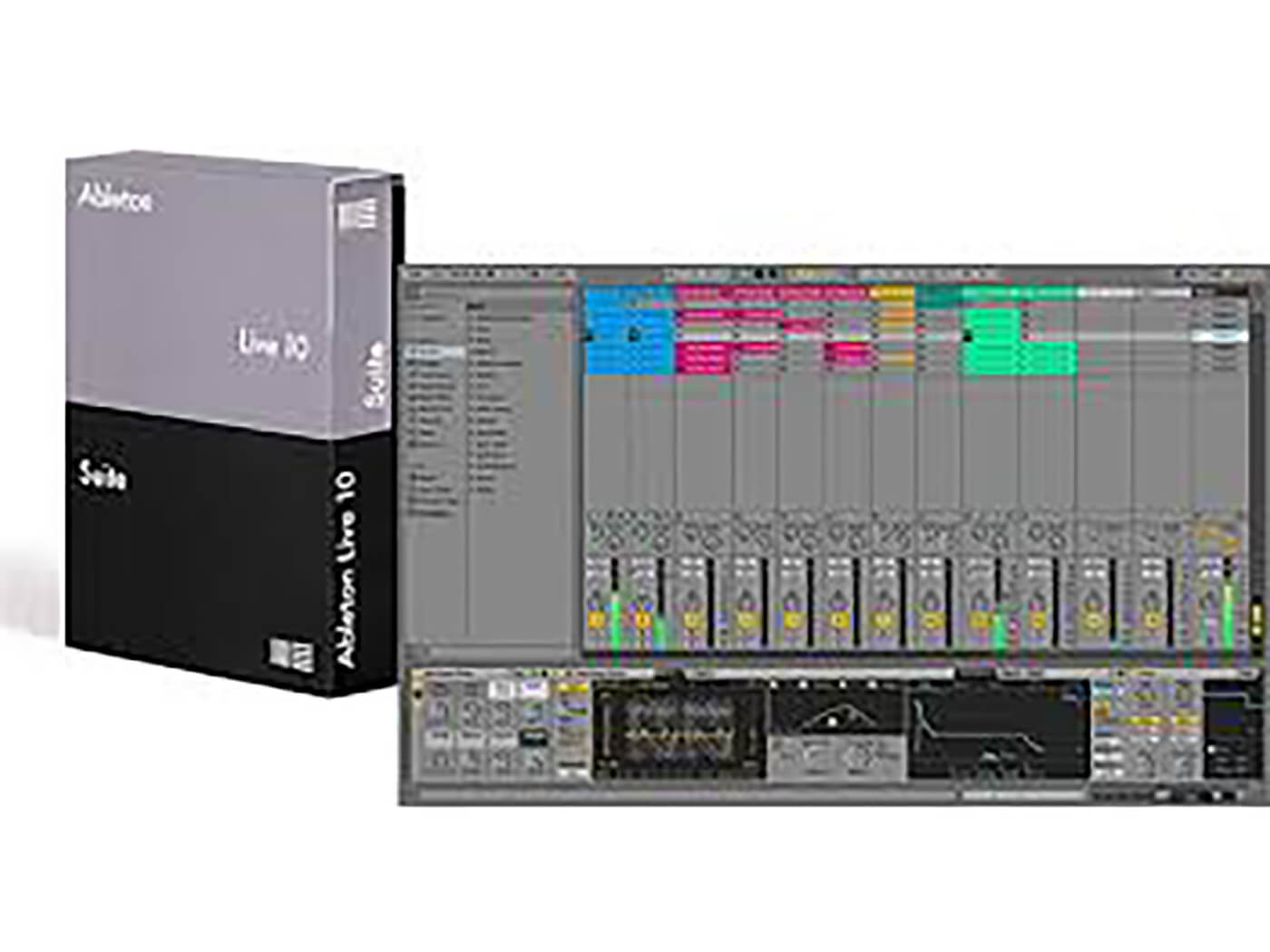 Live’s Session View is like a groovebox and why we started using it in the first place. Of course it’s evolved, but that grab-a-groove-and-go vibe persists, and no hardware can beat Live’s effects manipulation.